Ukraine International Airlines (UIA) has begun a new phase of rapid expansion aimed at improving its position as a network airline with a high reliance on transit traffic. The flag carrier plans to double the size of its fleet over the next five years, while also phasing out ageing 737 Classics and 767s.

UIA’s passenger traffic has grown 50% since 2013, despite turmoil in the Ukrainian market. The overall market declined significantly in 2014 and is still not back to 2013 levels.

UIA is expecting to grow by 25% to 26% in 2017, and by at least 15% per annum over the next several years. Transit traffic, which now accounts for half of UIA’s overall traffic, will continue to drive most of the expansion as growth opportunities in the local Ukrainian market remain relatively limited.

UIA has been the dominant airline in the Ukrainian market since early 2013, when Aerosvit collapsed. UIA grew by more than 60% in 2013 as it took over several Aerosvit routes, reaching 4.6 million passengers and exceeding a 30% share of the market for the first time. Aerosvit and UIA had been similarly sized airlines, with generally complementary rather than overlapping networks and market shares of approximately 15% each.

The overall Ukrainian market also grew in 2013, reaching a record high of 15 million passengers. However, traffic plummeted in 2014 as Ukraine was thrown into a crisis with political unrest and Russia’s annexation of Crimea. Demand was also impacted by economic problems as Ukraine’s GDP contracted by almost 7%.

UIA responded by trimming its fleet and cutting capacity, leading to a 16% reduction in traffic in 2014 to less than 4 million. However, UIA’s market share continued to increase as most foreign competitors stopped serving Ukraine and consolidation in the local airline sector continued.

2015 was another challenging year for the Ukrainian market as the economy contracted another 10%.

Market conditions improved further in 1H2017, and the overall Ukrainian market is now above 2012 levels. UIA expects to grow passenger traffic by 25% to 26% in 2017, reaching seven million for the first time.

UIA expects the overall market to grow at a slightly faster pace and end 2017 above 2012 levels, but still below the high mark of 15 million in 2013. Almost all the foreign airlines that suspended services in 2014 have resumed serving Ukraine. The charter market is particularly growing fast, leading to a faster growth rate for the overall market than for UIA because UAI does not have a significant presence in the charter sector.

Growth at UIA, particularly in the transit segment, is driving the rapid growth at Boryspil.  The airport reported a 37% increase in transit traffic in 1H2017, to 1.3 million passengers.

Transit traffic now accounts for nearly 30% of total traffic at Boryspil and 50% of traffic at UIA. The growth in transit traffic has been the main driver in UIA’s rapid growth as local market conditions, while they have improved significantly since 2014, are still not favourable. Ukraine’s economy remains relatively weak, with 2% GDP growth projected for the second consecutive year in 2017.

UIA plans to continue increasing its reliance on transit traffic in order to support further rapid expansion. The airline’s business plan envisages annual growth of 15% to 18% over the next several years. This growth, which will require a doubling of UIA’s fleet to approximately 90 aircraft by the end of 2022, cannot be achieved without more transit traffic.

Previously UIA had been focused primarily on Western Europe, limiting opportunities for sixth freedom transit traffic. In the early part of this decade transit traffic accounted for only approximately 10% of UIA’s total passenger traffic – and this consisted mainly of domestic to international connections.

“The conditions of the Ukrainian market field now leave us with very limited demand in Ukraine itself – and into Ukraine itself – [and] very little chance to grow”, Mr Miroshnikov told CAPA. “We had the option of stagnation – some frozen period of existence because disappearance isn’t an option – or growth and development on the account of transit traffic. And we opted for this and we have been growing and will continue to grow.”

UIA focuses on adding frequencies on existing routes in 2017

UIA has only added two international destinations so far in 2017. Milan Bergamo was launched in May-2017, complementing longstanding service to Milan Malpensa, and Budapest was added in Jun-2017.

UIA recently announced plans to launch Eilat, which will become its third new international destination for the year on 30-Oct-2017. Eilat will be UIA’s second destination in Israel, which is already its largest international market. 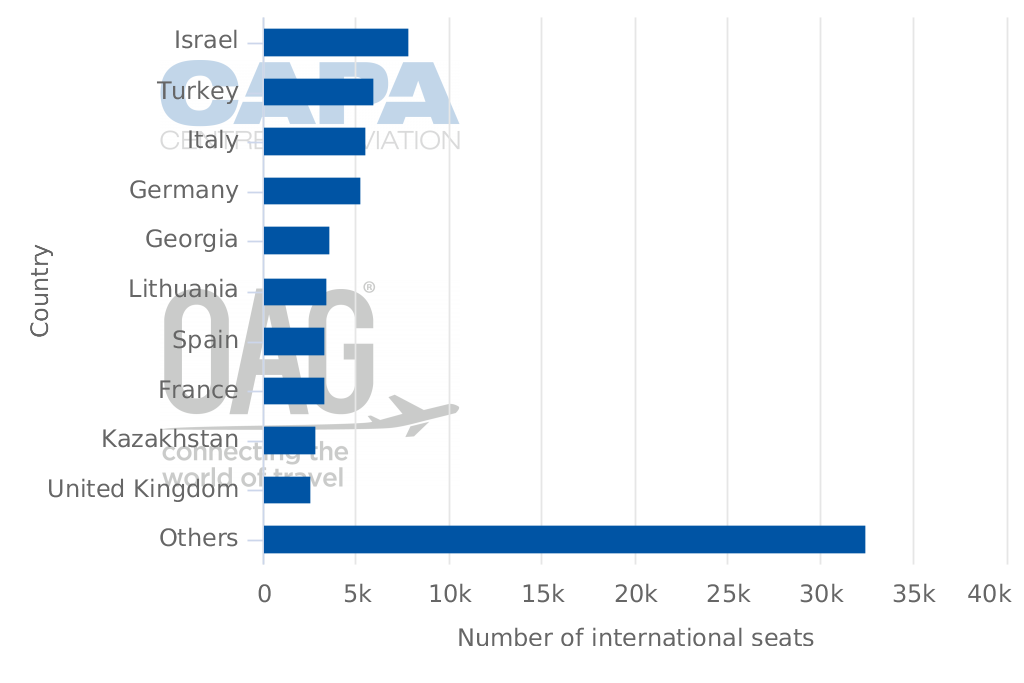 Mr Miroshnikov said UIA is planning to add up to three new international destinations in late 2017 including in Egypt, the Baltic region and Scandinavia. However, most of the approximately 25% growth in capacity for 2017 will be achieved by adding frequencies to existing destinations.

UIA is focused primarily on Kiev

Mr Miroshnikov noted that UIA is also continuing to expand its domestic network, which enables it to continue growing domestic to international connections. In Apr-2017 UIA launched services to Kherson in southern Ukraine, which is now served with one daily regional jet flight from Kiev.

UIA has also been adding some point-to-point international routes, mainly connecting secondary cities in Ukraine with leisure destinations in Europe and Israel. However, the main focus is on building up the hub at Kiev Boryspil (KBP), which now accounts for nearly 90% of UIA’s total seat capacity. 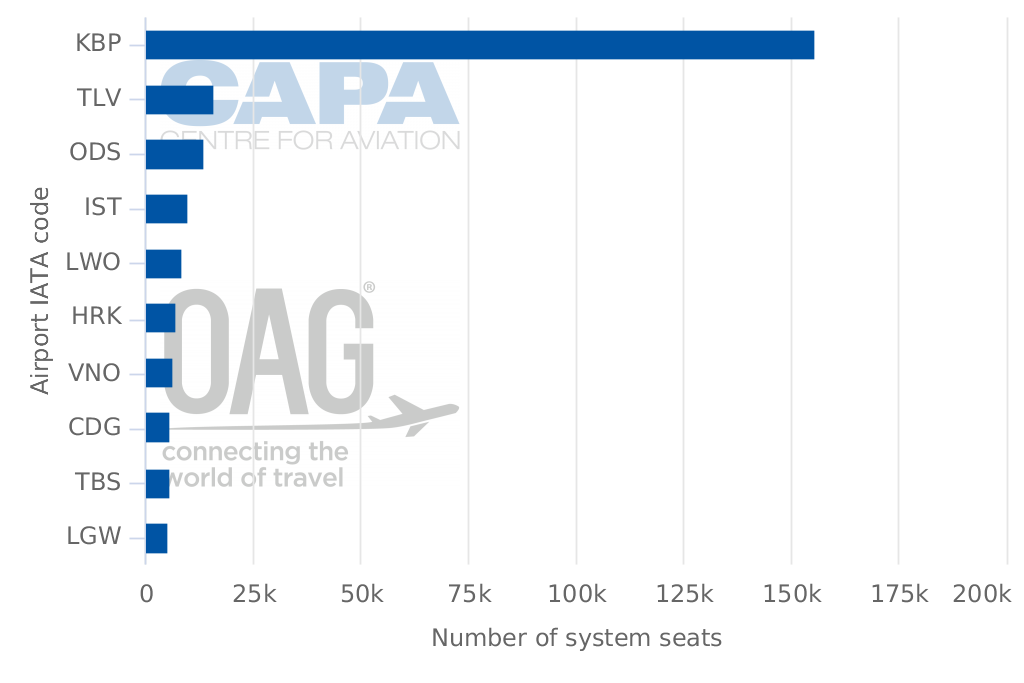 UIA has, broadly, a 30% share of seat capacity at Kharkiv, Odessa and Lviv. Odessa is slightly larger, handling just over 1 million passengers in 2016, compared to over 700,000 for Lviv and approximately 600,000 for Kharkiv.

Several foreign airlines serve each secondary city, as well as several smaller Ukrainian carriers. There are 10 Ukrainian airlines, but UIA is the only significant player.

UIA does not serve Zhuliany, but competes indirectly with the airlines at Zhuliany, particularly LCC Wizz – which accounts for nearly 40% of total Zhuliany capacity.

Wizz is one of seven LCCs serving Ukraine. However, LCCs overall account for only 7% of international seat capacity in Ukraine and there are no domestic LCC competitors. Ryanair has looked at the Ukrainian market for several years, but in Jul-2017 Europe’s largest LCC dropped plans to open bases and launch several routes from Boryspil and Lviv.

UIA is relatively well positioned to compete against potential new LCC competitors as it has a low cost base and relatively high density aircraft, enabling it to offer low fares to point-to-point passengers. UIA has also been unbundling its product, introducing charges for advance seat assignments earlier this year.

UIA’s heavy reliance on transit traffic also enables it to operate routes which lack enough local traffic to be sustainable. The airline is planning to expand its network with several new destinations in 2018, including at least three new long haul destinations, which will rely heavily on transit traffic.

CAPA will examine UIA’s plans for long haul expansion, as well as fleet growth, in Part 2 of this report