UK Transport Secretary Philip Hammond authorised the appointment of Bank of America Merrill Lynch as an advisor on the government's sale of a minority stake in National Air Traffic Services (NATS). The appointment is to reportedly advise the government on its options for the shareholding, to assist the government in reducing its record budget deficit.

The Conservative-Liberal Democrat coalition is considering the sale of part or all of its 49% shareholding to a single buyer, although the reduction of its stake below 25% would require new legislation. The government's stake is estimated to be worth USD810 million (GBP500 million).

NATS is already partly privatised and has been since 2001, when 51% was allocated to the private sector and employees. But further investment was immediately required following the dramatic decrease in air traffic after the Sep-2001 terrorist attacks in the US, GBP65 million of it coming from the British Government and the same from BAA, which received a 4% stake in return.

The most recently proposed sale may be complicated by the number of stakeholders involved, as well as the regulatory and legislative implications. London Gatwick Airport owner, Global Infrastructure Partners (GIP), has been identified as a potential buyer of the air traffic control company.

NATS CEO Richard Deakin stated earlier this year that the government’s plan to sell its stake in the company risks weakening the UK’s voice in Europe, as policymakers work on a plan to streamline European air traffic management according to traffic flows rather than national borders. Mr Deakin said much of the decision would be made "at a political level", meaning the government needed to keep a strong voice in its key air traffic body. easyJet also stated it would not support a sale that would lead to higher air traffic control charges.

During the time the German air traffic controller DFS (Deutsche Flugsicherung GmbH) was being considered for privatisation several years ago (it wasn’t privatised in the end), some members of The Airline Group considered pulling out, questioning whether their money could be better invested elsewhere. That, together with the fact that NATS remains the only privatised air traffic control entity, and the reduction in European air traffic during a recession that shows little sign of abating, there will surely be cause for concern among potential investors, whether they are considering buying from the airlines, the government, BAA, employees or all of them.

A partial sale of government assets would appear to be more likely – except that the government has demanded "big ideas" for cost cutting, with the attendant big savings. Continuing to nibble around the edges is not good enough. An IPO, with the best valuation estimate so far "several hundred millions of pounds (GBP)" is possible but neither institutions nor the general public has much confidence in air travel at present.

UK Civil Aviation Authority (CAA) last month published its formal price control proposals for the en-route and oceanic operations of NATS’ air traffic control business (NERL) for Control Period 3 (CP3), which will run for four years from 2011 to 2014. As required by the Transport Act 2000, NERL has given its consent to the CAA’s proposals.

The CAA’s proposals set NERL "demanding efficiency and service quality targets", to ensure the progress it has made since part-privatisation in 2001 continues into CP3. For example, average delay per flight "par values" have been reduced in CP3 to between 11.5 and 12.5 seconds, compared with 45 seconds in CP2.

The CAA has allowed GBP492 million (in 2008/09 prices) for investment in CP3, stating longer term performance improvements in performance will depend on investment in new technologies and sustaining existing operations.

The CAA noted its price control review took place at a time of  “unprecedented traffic turbulence”, as the UK suffers its worst traffic downturn since World War II. Contrary to previous expectations in the authority’s May-2010 initial price proposals, the downturn has continued. As a result, the CAA increased the proposed charges. However, the authority has sought to mitigate their effect on carriers by spreading increases that would have taken place in 2011 over the four years of CP3. As a result, EUROCONTROL charges will increase by 8% in 2011 and then remain broadly flat for the years 2012-14.

The authority also commented that the proposals represent a “significant and realistic contribution” to the Single European Sky second package (SES II) performance scheme. It added it is also targeting introduction in 2012 of an environmental metric to incentivise better flight efficiency, well in advance of European requirements.

Mr Deakin stated the CAA had set tough new service quality and efficiency targets, but had at least made sufficient allowance for capital and operating expenditure plans to meet these targets. He added the company will have to make “further challenging efficiency savings”. He highlighted that the CAA’s review had taken place against a backdrop of lower traffic and rising pension costs, which were the major contributors to the proposed increases in charges to airlines.

The proposed prices are as follows.

The number of flights controlled by NATS during 2009 declined 9.6% year-on-year to 2.2 million flights. NATS’ delay performance, however, showed marked improvement. In 2009, NATS brought down the average delay per flight attributable to air traffic control to 4.6 seconds, with 99.5% of flights receiving no NATS-attributable delay at all. This compares with 21.9 seconds delay per flight in 2008 and 98% of flights having no delay. 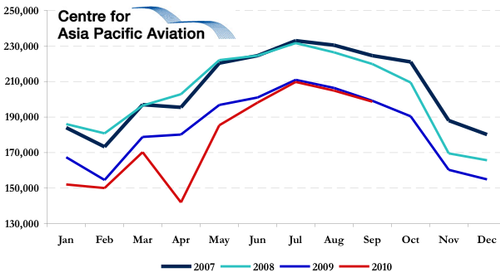 NATS postponed plans for further consultation over changes to airspace north of London, in the Terminal Control North (TCN) area. Instead, the proposals will be incorporated with a wider review of airspace over southern England. Work is in its early stages but is expected to deliver improvements in the period 2016-2020, with some earlier enabling improvements possible from 2013.

TCN and Terminal Control South (TCS) form the London Terminal Control (LTC). LTC covers much of southern England, reaching from as far north as Ipswich, west to Bournemouth and north-west to Banbury. NATS is in the process of reviewing the airspace structure of the region, following the release of new navigation technologies.

In related news, NATS' has shelved plans to allow aircraft waiting to land at London Luton Airport to enter a stacking system above Huntingdonshire and South Cambridgeshire, and those waiting to land at Stansted to stack over Norfolk, due to low passenger numbers. The plans have been put back to become part of a wider review in 2013/14.

NATS announced in Sep-2010 that it is on course to achieve the targets of its emission reduction programme, stating it is confident it will exceed its goal of saving 50,000 tonnes of carbon dioxide by for 2010. NATS was the first air traffic control provider to set targets to reduce ATM carbon dioxide emissions when it set the goals in 2008. Under the programme, the company has three main goals:

The company added its 2008 target was delivered, with the fund established. Mr Deakin stated the goals are a “win-win”, as they not only reduces CO2 emissions, but also decrease fuel bills for airlines and result in “greener airport operations”.

NATS’ carbon reduction target is in line with international aspirations. The Intergovernmental Panel on Climate Change has identified potential for cuts in aircraft fuel burn attributed to air traffic management of between 6-12% by 2020. SESAR, the project to harmonise air traffic control across Europe, has set its benchmark of 10% by the same year.

NATS also staged the first “perfect flight” between London Heathrow and Edinburgh in 2009, to demonstrate the ideal fuel-saving trajectory for aircraft. The company, in partnership with Airbus, Air France and the US Federal Aviation Administration, now plans to conduct "trans-Atlantic green flight" (TGF) trials with an Air France A380 on revenue flights from New York JFK to Paris CDG.

Under a recent contract from the SESAR Joint Undertaking (SJU), these A380 TGF trials are part of phase two of the Atlantic Interoperability Initiative to reduce Emissions – “AIRE2”. Phase one, AIRE, was jointly launched by the European Commission and the FAA in Jun-2007. The TGF flights are due to take place over six to eight weeks commencing 4Q2010. These will cover the optimisation of the taxi-out procedure at JFK as well as the en-route leg over the Atlantic. It is estimated that each A380 flight can reduce CO2 emissions by around three tonnes, compared with existing procedures.

NATS has also awarded a number of new contracts as of late including: