Brazilian airline Gol continues to face all the same challenges in 2015 that have plagued the airline during the last two to three years – a weak Brazilian economy, currency devaluation and soft corporate demand.

The company during that time has taken steps to improve its fundamentals including restructuring debt and improving its leverage ratios. Now it has gained approval from shareholders for a new corporate structure to allow the airline to possibly expand foreign ownership, which could create some advantages over the long term.

But in the short term Gol admits that the overall macroeconomic environment was even more challenging at the start of 2015 as corporate demand has fallen-off amidst a still-weak Brazilian economy.

Following a similar assessment by Latin America’s largest airline LATAM Airlines Group, Gol at the end of Mar-2015 estimated that corporate demand within Brazil was down approximately 30% year-on-year. Company executives remarked that weaker demand is likely to continue throughout the year.

Despite a downturn in corporate demand that started in 2014 and is lingering in 2015, Gol’s domestic traffic increased 8% in 2014 on a 1.7% decline in capacity, driving up domestic load factors by 7ppt to 77.8%. Yields notched up 1.4% for 2014, but fell nearly 9% during the last quarter of the year, reflecting the challenges that Gol and other airlines face in gaining some pricing traction in Brazil’s domestic environment.

Gol during 2015 plans flat capacity growth within the Brazilian domestic market, which still represents approximately 95% of its seats and nearly 88% of its ASKs. 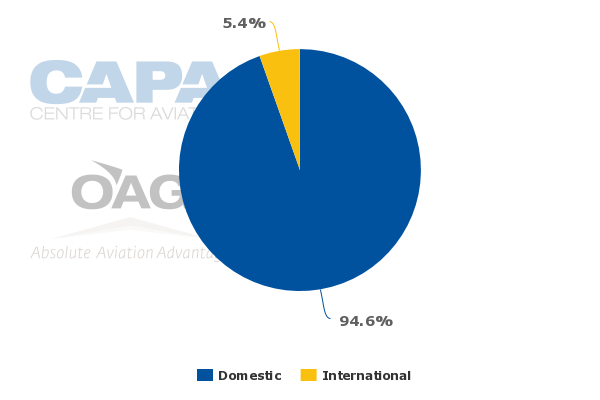 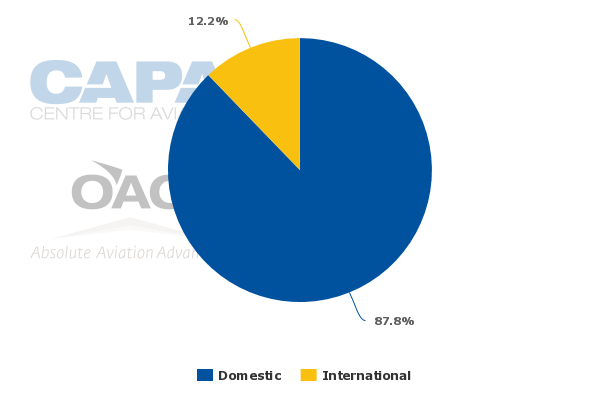 The company’s main rival TAM, part of LATAM, also plans to keep Brazilian domestic capacity flat in 2015, which should ensure a certain level of rationality in the market place. Brazil’s two other main airlines Azul and Avianca Brazil have continued to grow their capacity somewhat rapidly during the last couple of years, 34% and 24%, respectively, in 2014.

Traffic at each airline grew essentially at the same pace as capacity, which means their expanded supply was essentially absorbed. However, both airlines are likely suffering from lower yields in order to grow their market share. Azul increased its share from roughly 13% to nearly 17% year-on-year in 2014 and Avianca’s share grew from 7% to 8.4%.

TAM’s domestic supply dropped 1.5% in 2014. With the two largest airlines within Brazil opting to keep capacity in check, overall traffic increased 5.6% on flat capacity growth. Although TAM plans flat capacity growth in Brazil during 2015, it is making a push from its Brasilia hub, tapping more regional routes from a city that has a higher GDP than other South American cities.

Gol opts to expand internationally, but its strategy carries some risk

As Brazil’s economy has tumbled during the last two years, Gol has opted to resume international expansion. During 2014 its international ASKs jumped 11% and traffic increased by nearly 26%. The company estimated it transported 2.1 million international passengers in 2014 (versus roughly 37 million domestic customers), an increase of 18% year-on-year.

New international destinations introduced by Gol in 2014 included Sao Paulo to Santiago, Fortaleza to Buenos Aires and Viracopos to Miami. Punta Cana serves as Gol’s stop-over for US flights, and presently it operates service Campinas, Sao Paulo and Rio de Janeiro to Punta Cana with onward connections to Miami and Orlando. Rival Azul during late 2014 began flights to Orlando and Fort Lauderdale from Campinas, which could create some headwinds for Gol in its strategy of accessing US destinations via Punta Cana. 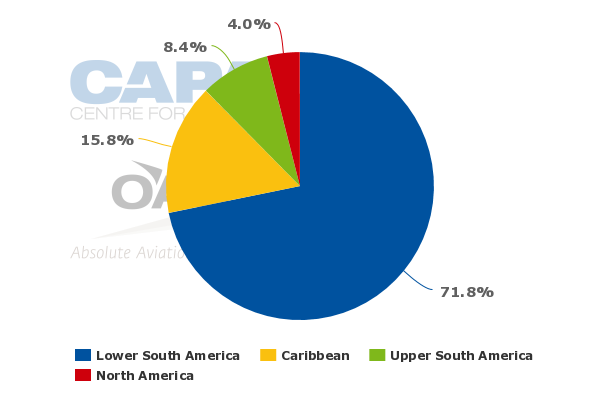 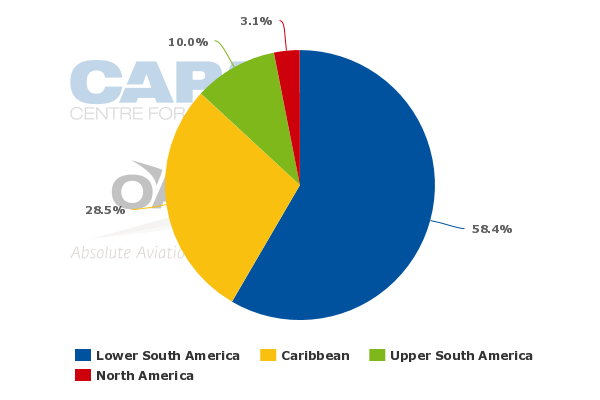 The airline’s international seats measured by country show that approximately 47% of its seats are allotted to Argentina (which is also suffering from weak economic conditions) and 38% of its ASKs are deployed to the country. LATAM recently estimated that during 4Q2014 Argentina’s currency declined 39% to USD. 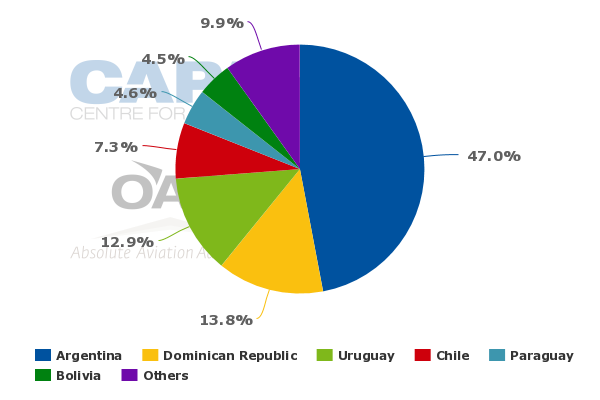 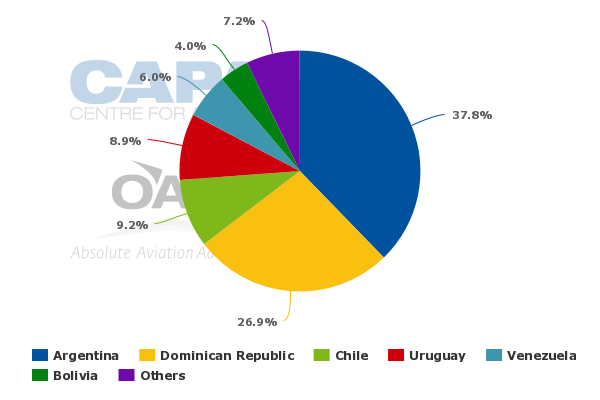 Since shedding its long-haul aircraft several years ago, Gol has focussed on regional international expansion and US flights via the Dominican Republic using its fleet of Boeing 737 narrowbodies. But its rivals could have an advantage in the near term by having an ability to diversify their route networks into longer-haul destinations.

LATAM recently cited capacity reductions by other airlines operating from South America to North America and Europe, which could create some opportunity for LATAM to leverage expansion in those markets as it keeps growth in Brazil flat.

Gol improves its balance sheet, but currency pressure and inflation linger in Brazil

During 1Q2015 Gol won approval from shareholders to alter its corporate structure that allows the company more flexibility to access capital markets and, according to news outlet Bloomberg, creates an opportunity for a larger portion of foreign ownership.

It seems to be a tactic by Gol to position itself as an attractive investment once conditions in Brazil improve as its executives recently acknowledged that presently there probably is not a lot of market appetite for investment in a Brazilian airline.

The change in corporate structure follows Gol’s moves to improve its balance sheet and leverage. Its gross debt to EBITAR ratio for 2014 was 6.7x and its BRL2.5 billion in cash at YE2014 equalled 25% of trailing 12M revenues. Its adjusted net debt to EBITAR at YE2014 was 5.3x, a significant improvement from the 31.4x ratio in 4Q2012.

In addition to tepid GDP growth, Brazil is also facing higher inflation. Although the Wall Street Journal recently reported that the country’s inflation rate should be lower in Apr-2015 than than 1Q2015, Brazil’s inflation rate was 7.9% for the 12M ending mid-Mar-2015.

Gol’s return to profitability is stymied by conditions in Brazil

Even as Gol has made progress in creating stability in a tough domestic Brazilian environment – including 12% revenue growth in 2014 – the airline recorded its fifth consecutive annual loss in 2014.

It has undertaken sound moves to diversify its network, strengthen its balance sheet and make responsible capacity decisions. But all the same challenges that Gol has faced in the recent past are stubbornly hovering over the airline for the short term, which indicates that a return to profitability is still somewhat off on the horizon.