Gol receives some recognition for its prolonged restructuring. Now the goal is profitability

Large Brazilian airline Gol is gaining some attention for the restructuring it has undertaken during the past three years as market conditions in its home country deteriorated driven by a weakening economy.

Despite a still tenuous economic environment Gol has worked to improve its financial situation through capacity reduction, the restructuring of debt, network changes and a heightened focus on the corporate customer.

The results are improved leverage, a shrinking of losses and increases in its margins. Gol is refraining from declaring any definitive targets of when it will return to profitability, but believes it could be on a clear path to positive net income by YE2015 as it braces for continued higher fuel costs and currency devaluation.

As previously reported by CAPA, Gol was the first Brazilian airline to undertake significant domestic capacity reductions in the face of worsening economic conditions in Brazil that ultimately weakened demand and pricing traction. Between 2011 and Jun-2014 Gol cut its capacity by 15% and also reduced employee headcount by 22%.

Challenges that swept over the Brazil domestic market starting in 2010

Gol executed the reductions in several ways including the wind down of the operations of Webjet, a smaller low-cost carrier it purchased in 2011, subleasing aircraft during the low season in the southern hemisphere and eliminating unprofitable routes. At the start of 2012 Gol embarked on the elimination of 130 unprofitable routes from its combined network with Webjet.

At the same time Gol was slashing its capacity in part by eliminating under-performing routes, Gol worked to strengthen its position at Brazil’s largest airports and optimise connection times at Sao Paulo Guarulhos to better match the schedules of its interline and codeshare partners.

Data from CAPA and OAG show that for the week of 15-Sep-2014 to 21-Sep-2014 Gol has a leading position at many of the airports serving Brazil’s top destination cities by arrivals (based on seat capacity). It is the second largest airline at Sao Paulo Guarulhos, Brasilia, Belem and Fortaleza and is the largest airline at Sao Paulo Congonhas, both airports in Rio de Janeiro (Galeo and Santos Dumont), Salvador, Recife, Curitiba, Porto Alegre and Belo Horizonte. 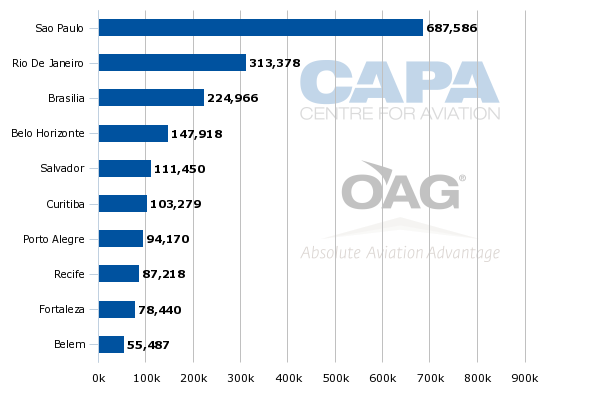 Gol also calculates that from 1H2012 to 1H2014 its market share of business travellers on domestic flights increased from 30% to 31% while TAM’s share fell from 40% to 34%. The airline estimates that higher end customers in its loyalty programme can fetch four to six times more revenues than non-corporate travellers. 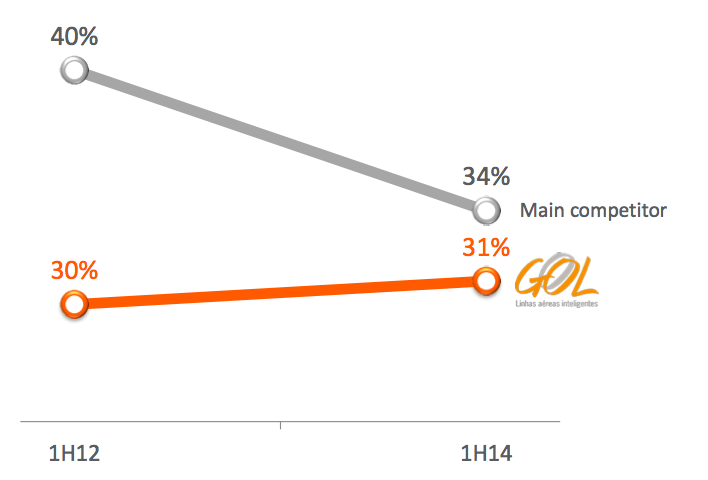 During most of CY2013 Gol’s load factor lagged the industry average even as its yields where relatively strong. But in CY2014 Gol has worked to bolster its loads alongside yield and recorded an 8ppt increase in load factor year-on-year in 1H2014 to 76%. Its yield during that time grew 10%.

Gol has more exposure to exchange rate fluctuations than rival TAM, but Gol now believes that it is building a foundation to withstand long term exchange rate pressure and volatile fuel costs. Gol estimates fuel expenses in Brazil are 45% higher than in Europe and 50% higher than the US.

During the past couple of years Gol’s leverage has received a lot of scrutiny in light of the airline posting annual losses in CY2011 to CY2013. Gol has worked to reduce its leverage through debt restructuring.

Gol’s debt restructuring was among the reasons highlighted by ratings agency Standard & Poor’s for a recent upgrade to stable from negative, noting the moves by Gol help to counter among other things a high concentration of its revenues within Brazil’s domestic market.

Gol during the past two years has undertaken network diversification to bolster its international offerings, and has set a goal of international routes representing 17% of its total revenues by 2016 compared with nearly 11% for the 12M ending 2Q2014. 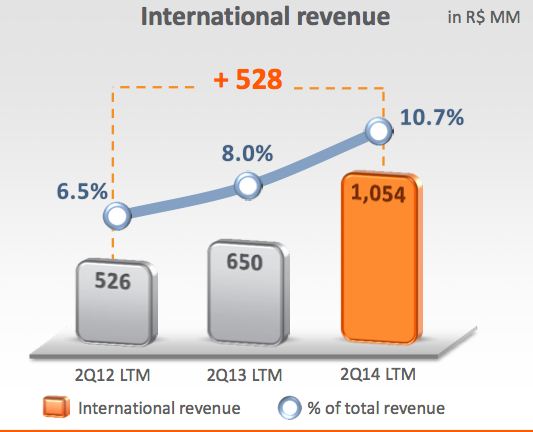 Gol’s push from Campinas is prior to the highly anticipated launch of new flights by Azul from its largest base at Viracopos to Fort Lauderdale and Miami in late 2014 with Airbus A330 widebodies. As previously reported by CAPA, it is tough to see how Gol will compete with Azul’s direct flights to the US, and Gol may have to once again consider operating widebodies after abandoning 767 operations in 2009 due to operating losses.

See related report: Azul shakes up Brazil market with A330s and US routes, becoming first long-haul LCC from the Americas

Gol is being coy about how it plans to grow its international revenues during the next three years, noting some of the routes between the US and Brazil would see solid capacity growth once the full Open Skies pact takes effect between the two countries in Oct-2015. Its executives are highlighting a decentralised international strategy, which could entail more service to the Caribbean and Central and South America.

Gol believes it can attain positive free cash flow in CY2015 as it reaches a neutral position in that metric during CY2014. The airline also calculates that it will record a positive net income when its margins reach the high single digits, which could occur by YE2015.

But it still faces higher fuel costs and exchange rate pressure as the rate for CY2014 is BRL2.30-BRL2.40 to the USD.

Profitability is the ultimate prize in Gol’s business transformation

All the steps that Gol has taken to improve its performance in important financial metrics during the past three years have been consistently overshadowed by its lack of profitability.

Now there appears to be some light at the end of the tunnel as ratings agencies and Wall Street recognise Gol’s efforts to de-lever and right size its domestic footprint to ensure its supply-demand balance remains rational.

It has been a long road as Gol now declares that a positive net income is the next step in its flight plan, deeming 2014 as the year it reaches altitude. Its steps to build a foundation for the new short to medium term realities in Brazil are commendable. Now it is time to make the leap to restored profitability.