One Asian market TransAsia is not interested in is Taipei-Hong Kong, the world's most populous international route and which is currently experiencing over-capacity following the opening of cross-Strait flights between Taiwan and mainland China, a market TransAsia is present in. The carrier's new A330s, its first widebodies, will initially be used on blue-chip regional routes to raise awareness and also where demand justifies their presence.

Currently about 5% of passengers on TransAsia’s Northeast and Southeast Asian flights are connecting, according to TransAsia chairman Vincent Lin. He wants to boost this to 20-30% in the next three to five years. The relatively low transfer rate currently is a reflection of network: TransAsia’s sole scheduled Southeast Asian service is to Singapore. While Mr Lin wants to boost transfer figures on the Singapore service, growth in connecting traffic will occur through additional destinations.

TransAsia over the next year plans to undertake an ambitious growth plan, expanding to Bangkok as well as undetermined points in Indonesia and Malaysia. A Tokyo service will also likely be added.

Mr Lin is betting on geography to be to his advantage: Taiwan is nestled between Northeast and Southeast Asia, enabling the carrier to serve most cities in either region with narrowbody aircraft. “Our origin is Taiwanese but we would like to present ourselves as a region’s airline. That is the goal we are putting ourselves at,” Mr Lin says.

The inertia of many others will also be to his advantage. LCCs have come to dominate intra-Southeast Asia traffic and are growing in Northeast Asia, but getting from Southeast to Northeast Asia still remains challenging. Aside from a handful of routes served by long-haul LCCs AirAsia X, Jetstar and Scoot, fares tend to be high, schedules limited and outdated aircraft used. Legacy carriers have largely had the market to themselves without pressure to improve service or schedule or reduce fares. This is particularly true in Japan, where legacy carriers there are some of Asia’s most bloated and the market bemoans the high fares on ageing 767s while the more high-profile long-haul routes have better service – and fares.

TransAsia has made Japan something of a focus, serving seven cities, most in the popular Hokkaido travelling region. With few exceptions, legacy carriers tend to focus on Japan’s main cities of Osaka and Tokyo and look past other opportunities. This is slowly changing, and a combination of greater LCCs and agile FSCs (KLM will launch an Amsterdam-Fukuoka route, Hawaiian Air serves Fukuoka and Sapporo) will bring prominence to this untapped growth.

Taiwan and Japan maintain strong ties (Taiwan was a Japanese colony) and tourism flows between the countries are large, and will only grow following the recent open skies agreement between them.

While connecting traffic is a competitive market – price wins – Mr Lin reckons he can make TransAsia agile, especially compared to the legacy and slow-moving competitors at home and abroad. 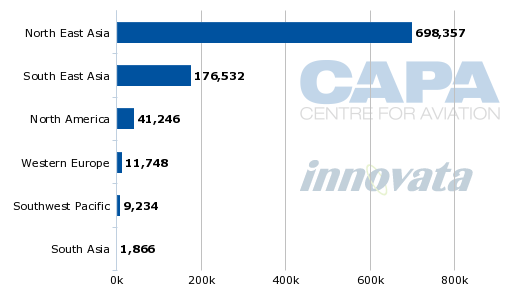 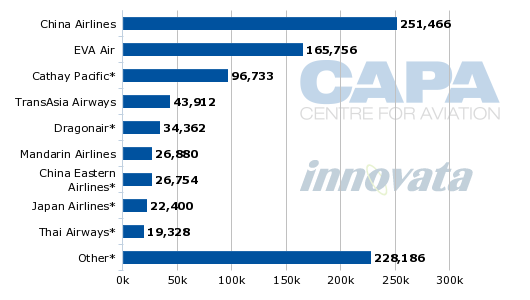 TransAsia’s sole Southeast Asian service is a daily flight to Singapore, which it recently upgraded from an A320/A321 to its new A330, which the carrier took delivery of in Nov-2012. Mr Lin expects TransAsia to expand to Bangkok as well as unspecified points in Indonesia and Malaysia. Much-larger Taiwanese peers China Airlines and EVA Air already have sizeable Indonesian and Malaysian networks. 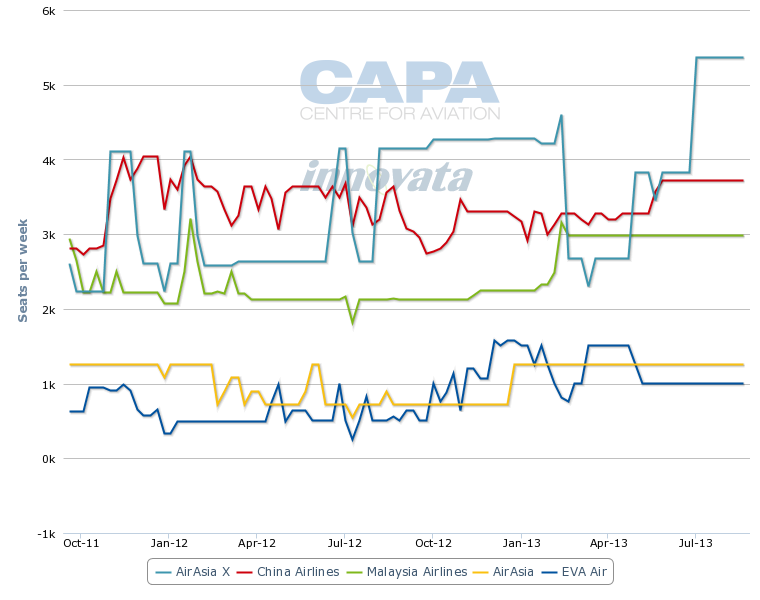 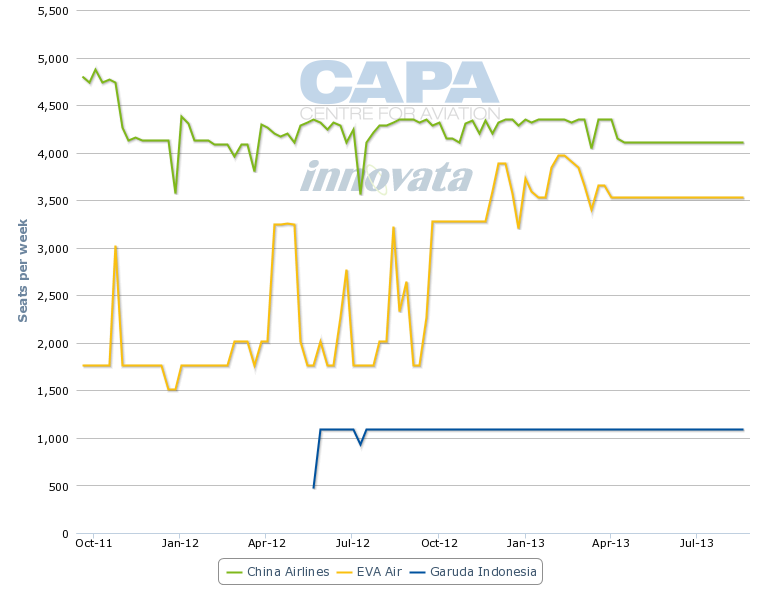 China Airlines serves Kuala Lumpur and Penang in Malaysia as well as Denpasar-Bali, Jakarta and Surabaya in Indonesia while EVA Air serves Kuala Lumpur in Malaysia and Denpasar-Bali, Jakarta and Surabaya in Indonesia. They also serve other Southeast Asian points like Ho Chi Minh, Phnom Penh and Yangon. For exactly where TransAsia will expand to in the region, Mr Lin says “we’re trying to sort that out”. Flights are all but guaranteed to depart from Taipei, Taiwan’s capital and largest city. TransAsia does have some regional services from other Taiwanese cities, but these are primarily because those were the specific traffic rights it was given.

Once TransAsia adds destinations, initially likely served at most once a day, it will look to boost frequency. This will primarily give TransAsia a better share of the local traffic to and from Taiwan and improve connectivity between destinations. Except for Macau, regional flights are served no more than daily, which can limit connections. “Once we’re ready, we’ll continue to expand more frequencies and more destinations there,” Mr Lin says of Southeast Asia. 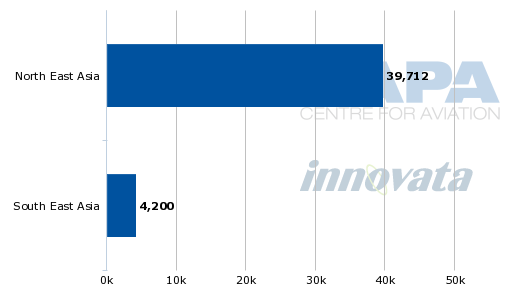 A330 fleet, likely to be expanded, to help raise awareness and competitiveness

TransAsia has taken delivery of the two A330s it ordered and plans for the short-term deployment to consist of Osaka, Singapore, Shanghai and various points in Japan’s Hokkaido region (served less than daily). The return service from Singapore to Taipei is an overnight flight, enabling TransAsia to have a high utilisation rate and drive costs down. 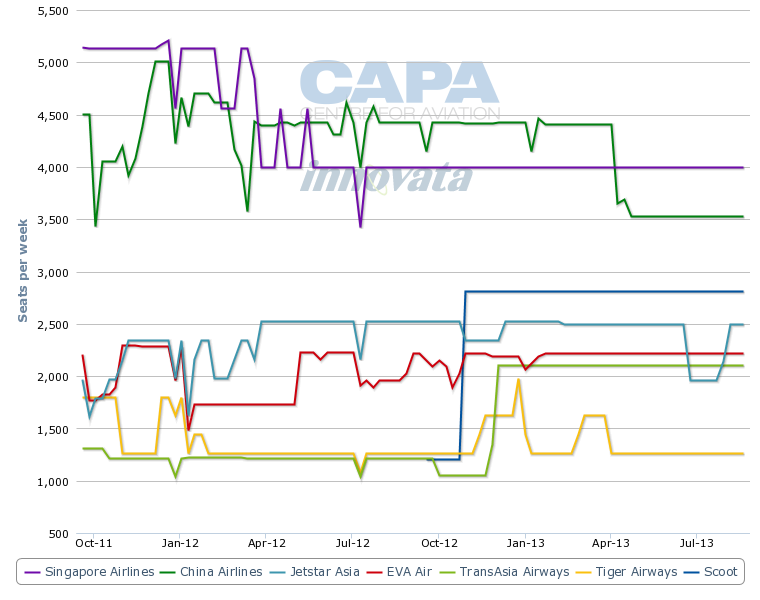 The A330’s deployment to Singapore and Japan may seem surprising given the importance of cross-Strait traffic (it accounts for one-third of revenue and a disproportionately higher share of profit) and the frequency limitations in the market, which could allow TransAsia to grow via aircraft size in absence of frequency. 747-400s and other widebodies regularly ply the one or two hour trunk routes between Taipei and mainland China. TransAsia’s cross-Strait routes primarily depart from Taipei Songshan, the smaller downtown airport where accommodating widebodies initially proved challenging. Competitors mainly use Taipei’s further-flung Taoyuan.

Demand out of Japan justifies the A330’s capacity, but the aircraft also offer a strategic advantage by featuring a premium configuration. Both business and economy class have in-seat Panasonic eX2 IFE while business class has angled beds, a relatively high specification for regional usage (deployment on intercontinental routes in coming years would make more appropriate use of the configuration). TransAsia’s overnight flight from Singapore to Taipei, and potentially other similarly scheduled routes to Southeast Asia, could demand a higher level of product for the overnight service.

TransAsia’s narrowbody aircraft are in a typical generic regional configuration, allowing the carrier to use its A330s on trunk routes – Osaka, Singapore – where it wants to stand out.

TransAsia holds no options or purchase rights on the A330, but subject to performance will likely order additional A330s, and even consider A350s. The A330 “has been and will continue to be a great source of improvement for this airline. It is a very integral and important piece of equipment,” Mr Lin says. “As long as performance meets our expectations, we’ll continue to expand this type of aircraft.”

TransAsia’s planned expansion to Tokyo will pit it against some notable capacity, mainly from full-service carriers but also Scoot. 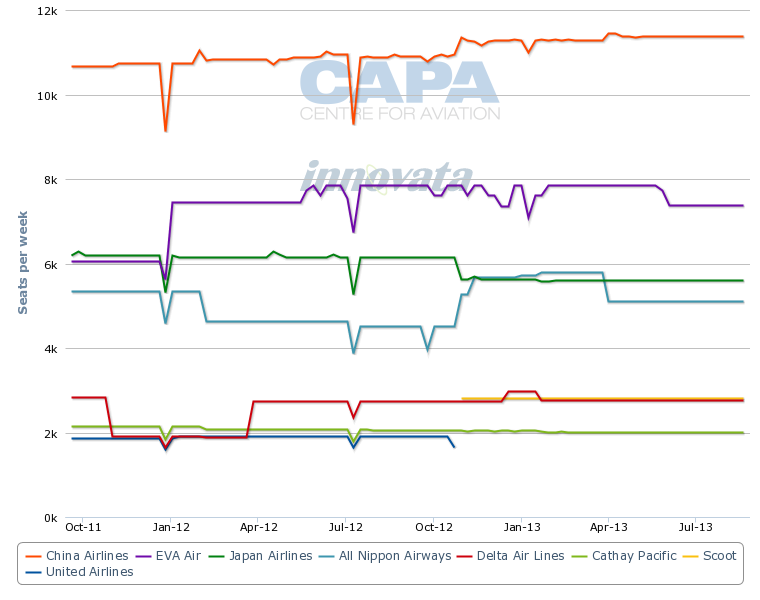 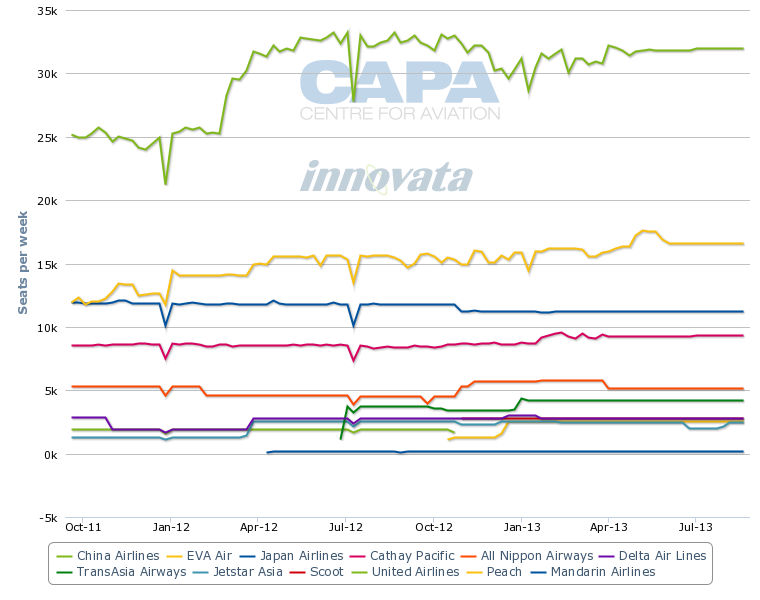 Expansion around Northeast Asia seemingly represents less opportunity as there are fewer countries to operate to. While TransAsia has a notable Japanese network, it is heavily concentrated in the north and there are potential opportunities in central and western Japan. Korea offers few cities in general, and TransAsia already serves Busan and Cheju (it does not serve Seoul). Mainland China retains tremendous potential, but this market is heavily regulated (it will be examined in part two of this analysis to run separately).

North Korea is obviously off the cards, TransAsia is already in Macau (and would like fifth freedom rights – this also to be examined in Part II), leaving only Hong Kong in North Asia. There are no intentions to expand to Hong Kong as long as the status quo, unfavourable in TransAsia's view, persists.

Hong Kong-Taipei is the world’s largest international air route when measured on available seat capacity. Hong Kong has historically functioned as the intermediary gateway between mainland China and Taiwan, where direct flights were largely prohibited due to political reasons. The so-called cross-Strait market opened in 2008 and has grown considerably since then. See related article: China Airlines and EVA Air respond to massive change in Taiwan – but the foreign LCCs are coming

As a result of direct flights between mainland China and Taiwan, the Hong Kong-Taipei sector has lost appeal. Capacity is nearly flat on 2008 levels – a nearly unprecedented example in growing Asia. The introduction of agile Hong Kong Airlines into the market has placed yield pressure on heavyweights China Airlines and Cathay Pacific/Dragonair while load factors are not as strong as they used to be.

All of this makes for an unappetising proposition to Mr Lin. “If I were to fly to Hong Kong and be competitive, I would need at least three daily to make it worthwhile. With three daily, I honestly do think that route would be way over-capacitised, which it already is I think. To add more to it, it would be a bloodbath – which I think it is.” 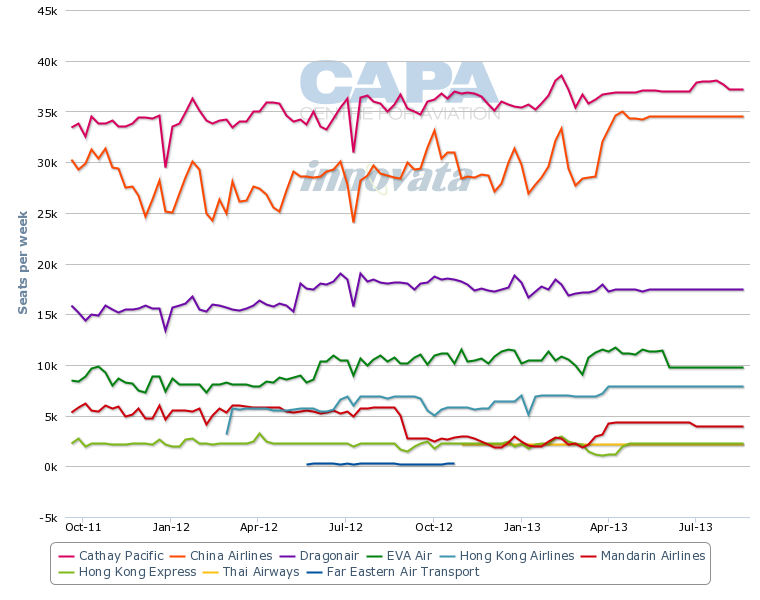 The second and third parts of this report, to be published shortly, will look at how TransAsia plans to respond to LCCs, its reservation system cutover, and long-term growth considerations, including intercontinental services and the establishment of branch offices. The cross-Strait market to mainland China will also be evaluated, as will TransAsia’s interests in alliances and partnerships.