Taiwan’s EVA Air formally signed on 29-Mar-2012 with Star Alliance to join the grouping after Star’s Chief Executive Board unanimously accepted the carrier's membership application. Wholly owned regional subsidiary UNI Air, however, will not be joining Star and EVA President KW Chang has instead revealed is was a possibility that UNI may be converted to a low-cost carrier.

As Asia’s network airlines quickly establish their own LCC subsidiaries, the pressure mounts on others to follow suit and EVA is apparently no exception. In a clear sign that the flurry of LCC subsidiary announcements by other airline groups in Asia was influencing EVA management thinking, Mr Chang Kuo-wei said “it is one thing we are thinking of, but it is only a possibility this stage”. While it ponders a possible new short-haul LCC strategy, EVA hopes to leverage its Star Alliance membership to expand on long-haul routes.

UNI Air now operates domestic and cross-Straits routes to Mainland China and also serves two destinations in Vietnam. Carrying primarily leisure traffic, UNI operates up to 11 Boeing MD-90s in two-class configuration, along with Bombardier Dash 8-300s, shortly to be replaced by ATR-72s. The regional operator was acquired by EVA as Makung Airlines, which the parent then merged with Great China Airlines and Taiwan Airlines as the high speed rail system in Taiwan was introduced, destroying most of Taiwan's domestic market, eventually rolling all three carriers into UNI Airways.

According to Mr Chang, EVA plans to take delivery of up to six leased A321s over the next three to four years as UNI Air’s ageing MD-90s are phased out. This makes a scenario of UNI becoming EVA’s low-cost subsidiary a realistic proposition – although there would be a complicated path in between. Efforts to establish LCCs from existing airlines have had a difficult history. The greenfield model has been much more successful.

Air China will “mentor” EVA into the Star fold

It is something of a barometer of change in North Asia that today’s latest confirmed recruit for the Star Alliance, Taiwan’s EVA Air, should be down to be “mentored” into the alliance by the mainland’s Beijing-based Air China. As recently as a decade ago, such a relationship would have been unthinkable.

But such is the power of economic and political change in North Asia that it is today perhaps perfectly natural. The sheer economic force of expanding GDP per capita on either side of the Taiwan Strait now has the power to override diplomacy, in the process blurring the social and political differences.

In the meantime, cross-Strait services have been opened up, allowing proliferation of direct operations between Taiwan and several Chinese mainland cities. The oligopolistic control of markets between Hong Kong/Macau and Taiwanese cities, with traffic then connecting beyond for the mainland, has disappeared. Chinese airlines too are now able to play in that arena and as the market evolves, carriers like Air China will want to make sure that they are very much part of it.

EVA and UNI combined currently serves about 25 destinations in Mainland China. While further expansion of the group's mainland network is uncertain and contingent on more traffic rights opening up, capacity on the existing services will expand as 14 A321s are delivered.

Star moves to even up the SkyTeam balance in China

At an alliance level EVA’s accession will be important for Star. Whatever forecast is applied, China will be the major growth market of the next couple of decades at least. The Star Alliance has ceded its supremacy in that massively important market to SkyTeam, which now has members in both Shanghai (China Eastern/Shanghai Airlines) and Guangzhou in the south (China Southern, the country’s largest airline), as well as adding Taiwan’s largest carrier, China Airlines (CAL), last year. Xiamen Airlines is also now in the process of joining SkyTeam. 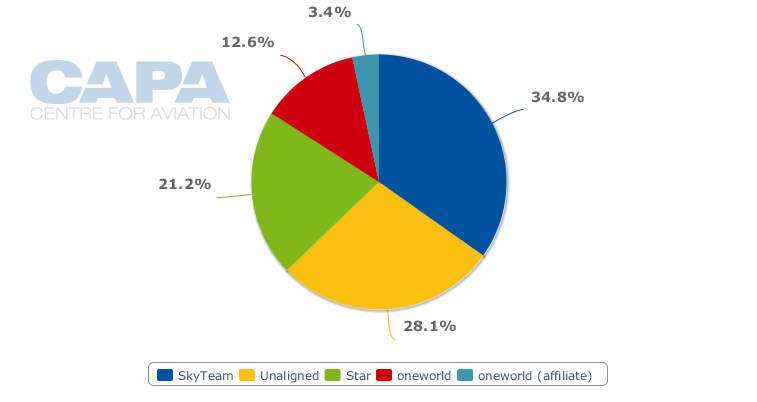 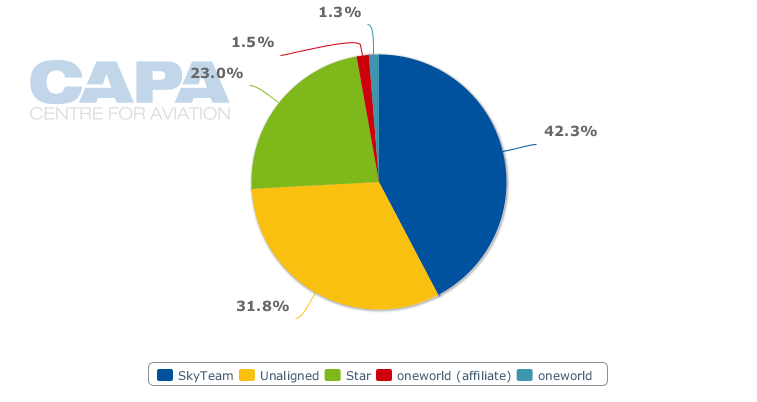 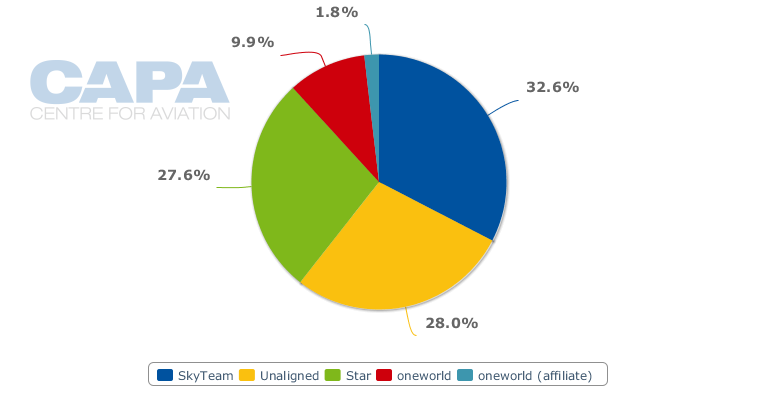 Air China SVP, Xiao-Hang Zhao, noted the carrier's new relationship with EVA was particularly important for each side “for cross-Straits flights”. EVA will be looking for more from the Star role than that, but there should be considerable advantages for both carriers in point-to-point markets.

In reality, Air China is probably perfectly capable of seeing to its own needs in the Taiwan market, but as a member of the alliance will share with it the value in ensuring that EVA is on its team rather than being part of oneworld.

EVA hopes its global reach will be expanded through Star membership. Transfer traffic at home airport Taipei Taoyuan Airport has suffered since China’s market opened up and, although traffic figures are strong to the extent that Taipei’s capacity is being stretched, the growth now is in point-to-point China mainland traffic – where Chinese mainland airlines are encroaching, just as Korean and Southeast Asian (and soon Japanese) LCCs are becoming troublesome in other regional short-haul markets. At home too, Taiwan's third largest carrier TransAsia is increasingly problematic and was the only Taiwanese airline to pay a dividend this year.

Mr Chang is hopeful that, with Star support – perhaps even a full immunised joint venture with the US members - EVA will be able to attract Chinese transfer traffic en route to US points, making use of the US’ clumsy visa processing of Chinese visitors. He hopes to be able to use a Taiwanese visa waiver provision to help Chinese mainlanders transferring over Taipei, to make their journey easier. In support of its long-haul expansion plan, EVA is to take delivery of up to seven Boeing 777-300ERs over the next four years.

The carrier’s share price has almost halved since peaking last year and EVA yesterday successfully placed a bond issue, raising TWD6.5 billion (USD220 million) by selling five-year bonds at 1.22%, adding around 50% to its cash reserves. On 27-Mar-2012, EVA reported its 2011 full year results, showing a decline of 2.1% in revenue to USD3.5 billion and an increase of 11.3% in costs as its net profit slumped 98.3% to USD7.1 million. 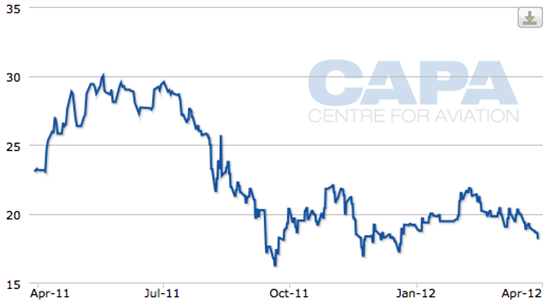 High fuel costs are hurting and EVA's very large cargo business has slumped and shows little sign of recovery. As competition grows all around it, EVA is looking for a resurgence that will be difficult to achieve.

A low-cost subsidiary would seem a wise course, assuming that most of its regional competition has got it right, but whether converting UNI Air for that role is the right way to go will depend greatly on how it is implemented. The firming up of Star Alliance membership is a welcome bright light on the way ahead, but EVA will need more than that to retrieve its forward momentum.