Sales in the West for the Sukhoi Superjet 100 have been few and far between, but Sukhoi has registered another success this month. On 02-Sep-2010, California-based Willis Lease Finance signed an MoU valued at USD300 million to acquire six Sukhoi Superjet (SSJ 100) regional jets and options for four more.

The order by Willis is the third by a Western company, following a 2007 order by the Abruzzo-based ItAli Airlines and a Jul-2010 order by Bermuda-based aircraft leasing company, Pearl Aircraft Corporation.

The company said the agreement covers the SSJ100/95 LR aircraft in a 98-seat configuration. Delivery of the first aircraft is set for Sep-2012.

The SSJ 100 is the result of a collaboration between Sukhoi, part of Russia’s massive UAC, and Alenia Aeronautica, a subsidiary of Finmeccanica. The engines are developed in a partnership between NPO Saturn and Snecma, a unit of the Safran group.

The MoU is the first expressed interest by a US entity in the Russian/Italian airliner, which recently gained certification by Russian authorities. Indeed, should a contract be reached, the fact there is an existing US customer clears the way for the FAA certification process to begin.

The order by Willis Lease not only expands its regional airline business, but is a step it hopes to use to leverage French, Russian and Italian connections to broaden its international coverage. The company earns more than 50% of its annual revenue in North America and Europe. Another 19% comes from Asia, while South America accounts for 16% and the Middle East and Africa is responsible for just 7%.

Expanding its presence in the regional jet market is a potentially risky proposition for Willis. Boeing recently forecast that regional jets would account for just 800 new orders in North America over the next 20 years, representing just 4% of the total investment for new aircraft.

The US manufacturer expects regional jets, particularly the smaller 30 to 50-seat varieties to be replaced by larger aircraft or by turboprops over the next 20 years. High fuel prices have placed “severe pressure” on smaller regional jets, rendering them uneconomical to operate.

US airlines are predicted to cut the fleet of 30-50 seat regional jets from 1,200 to 200 aircraft. Delta Air Lines announced plans to park half of the regional jets in the fleet of its Comair subsidiary over the next two years and other carriers are expected to follow suit. American Airlines is also looking at divesting its American Eagle regional unit. The phenomenon is not just limited to North America. Australia’s Virgin Blue announced plans at the beginning of the month to sell its four 70-seat E170 regional jets, while retaining its fleet of larger E-195s.

Boeing forecasts a total global market for regional jets of just 2,100 aircraft over the next 20 years.

Regional jet makers disagree with this outlook. Bombardier expects 3,800 orders for regional jets by 2029. Embraer’s outlook is even rosier, forecasting a global market of 6,750 new regional jets over the next 20 years, although this includes aircraft up to 120 seats.

All manufacturers agree on one thing though: regional jet aircraft will get larger. Most new regional jet programmes are focusing on aircraft in the 70 to 120-seat range, moving very close to territory occupied by the A318 and the B737-600.

Bombardier is already bridging this gap, with its 100-130 seat CSeries. It is also flight testing the 100-seat CRJ-1000. Embraer is looking at a stretched version of its Ejets family. Mitsubishi’s new MRJ family will stretch up to 96 seats, with a larger version potentially in the works.

President and CEO, Charles Willis, stated there is “strong potential … in developing new regional markets throughout the world,” and the acquisition of the SSJ 100 is a strategic one for the company. Willis’ business centres on leading spare commercial engines and aircraft to commercial airlines, aircraft engine manufacturers, air cargo carriers and maintenance, repair and overhaul facilities worldwide.

While the regional jet market may be falling off in developed economies, there are still massive opportunities in markets such as China, India and Africa, where regional travel is still developing. Willis believes the international consortium of companies involved in the SSJ 100 will help an entry into these strategic new markets. By becoming the first US-based company to join the alliance, Wills also benefits from “attractive financing alternatives and take a leading role in introducing this innovative aircraft to our global customer base”.

According to Willis, the SSJ 100 may be able to deliver operating efficiencies of 10% or better over competing aircraft models. While a 10% advantage over current regional airliners seems impressive, airlines today are looking for more than that - at least 15% if they are going to take on the task of acquiring a new aircraft.

Trading on US exchanges was closed due to the Labour Day holiday. United Aircraft Corporation shares finished the day 8.6% higher, as the company’s share price recovers following a steady decline over the past four months. 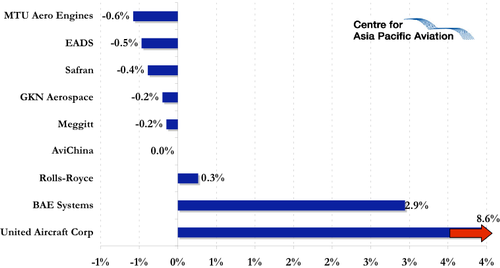 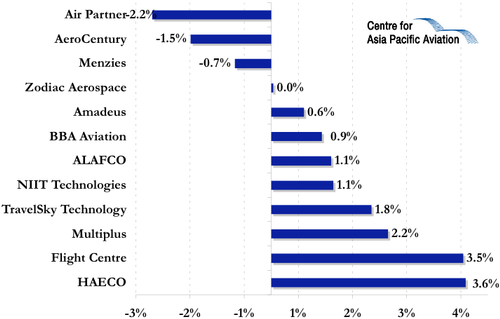