Regional airline routes in Australia set to take off

An unprecedented four independent airlines are set to operate jet aircraft in the Australian market next year, stimulating more previously unserved markets than ever before. Consumers can look forward to some bargain fare levels priced to stimulate demand in the recovery phase.

It all adds up to an exciting cocktail of domestic and regional network development in Australia.

The Australian domestic air market – had it reached ‘maturity’?

Australia’s domestic air traffic developed well between 2000 and 2019, growing at a compound annual rate of 3.6%. Corresponding GDP growth was 2.9%, putting Australian aviation growth into a comfortable ‘GDP plus’ range. It was undoubtedly a solid result for what is generally regarded as a well developed and relatively mature domestic aviation market.

Traffic growth was not distributed equally, however, neither along the two-decade timeline nor across the full portfolio of domestic markets.

In the period between 2000 and 2013 there was a competitive market structure, producing compound annual traffic growth rates of 4.8%. This was propelled by market entry by Virgin Blue and Impulse at the turn of the century, briefly held back by Ansett’s collapse in 2001, and then fanned by the creation of Jetstar in 2004 and Tigerair’s debut in late 2007.

The ACCC waved through Virgin Australia’s acquisition of Tigerair in 2013 and 2014 after Virgin's foreign airline owners and Qantas separately decided enough was enough of the bloody fare war of the preceding years. This removed the only other carrier from the market and another duopoly was established, leading to slower compound annual growth of just 1.2% annually between 2013 and 2019.

The following graph illustrates how the different market segments evolved over this period, with the mid-blue line showing growth in larger markets with over one million annual passengers. 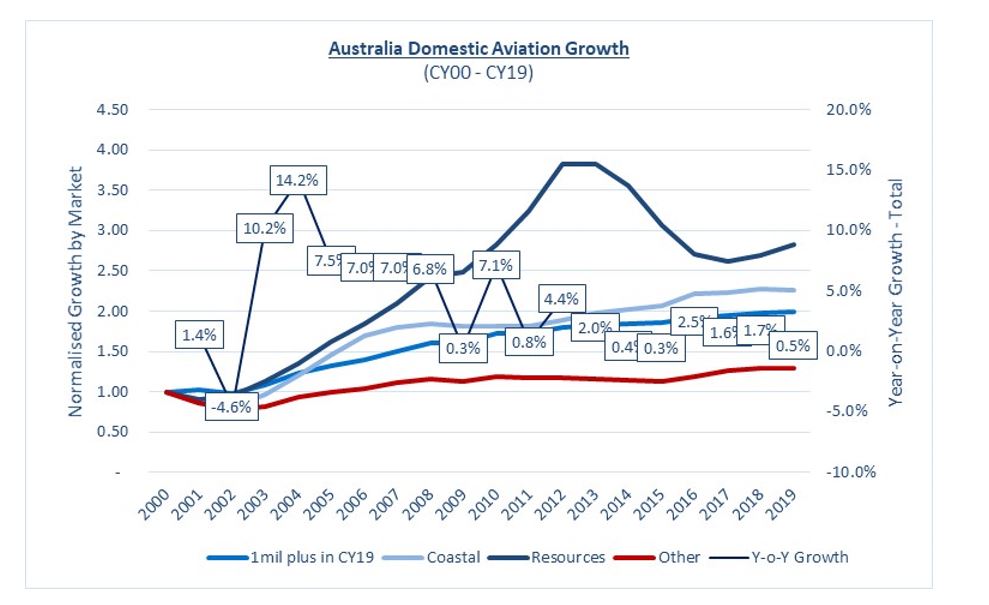 Larger airports and key coastal cities were the big winners

The distribution of growth was equally skewed when viewed by market segment.

Australia’s largest markets, for this example defined by airports that processed in excess of 1 million passengers in CY2019, as well as key coastal markets such as Ballina and Whitsunday Coast, benefitted from generous capacity allocations by all airlines – but in particular by low cost carriers (LCCs).

As the mining and resources sector went from strength to strength during the decade up to 2013, a growing ratio of capacity was allocated to this highly profitable segment.  When the mining boom came off its peak, freed-up capacity from the Pilbara and Central Queensland found its way to leisure markets such as Hobart, Ballina and Sunshine Coast, before the market ran out of steam in 2019 and fell off a cliff in 2020 with the onset of the COVID-19 pandemic.

The one market segment mostly left behind during this entire period is best described as ‘non-coastal and non-resources industry-related regional markets’, ranging from markets as small as Narrabri to those as large as Kalgoorlie.

Together, as a group, these markets achieved a 1.4% compound annual traffic growth rate between 2000 and 2019.

Between 2017 and early 2020, just before the outbreak of the pandemic, concentrating on non-capital city airports and aside from air services on aircraft offering fewer than 19 seats, some 20 new city pairs were added to the domestic network. Seven of these were discontinued and another 12, already served before 2017, were lost within that same period.

Then pandemic ushered in another frenetic wave of activity.

Since the start of the pandemic, over the past 18 months, 17 city pairs that were not connected before have received new services, all of which are still in airline schedules. Just two other routes, already served before 2020, have been lost since the pandemic began.

A smaller Australian airline industry has had to navigate its way through complex international and domestic border closures. It has become, in aggregate, more innovative as far as the introduction of new routes is concerned than it was in the years before COVID-19.

Coastal and leisure markets continue to lead the way in new market development and Adelaide, Canberra, Cairns, Sunshine Coast and Newcastle feature most prominently on the list.

1. Demand is alive and well

After the first wave of blanket city/state lockdowns was eased in mid-2020, ongoing international border controls/hotel quarantine allowed Australia to achieve zero community transmission. As a result, Australia enjoyed strong local travel demand as people travelled to catch up with loved ones and enjoy a domestic holiday.

Because international and some state borders restrictions remained, travel activity was led by intra-state journeys and surface transport.

However, when most of Australia opened up during 1H2021, domestic air travel reached levels just 30% below the corresponding period in 2019. While commentators at the time were worried that disposable income levels would have decreased and/or leave balances would have been depleted as a consequence of the pandemic, it did not take much more than the ability to fly, and to do so at attractive fare levels, to kick-start the industry.

‘Best-Discount’ Australian domestic fares reached their low point in May-2021, according to BITRE data, as airlines stimulated the market. 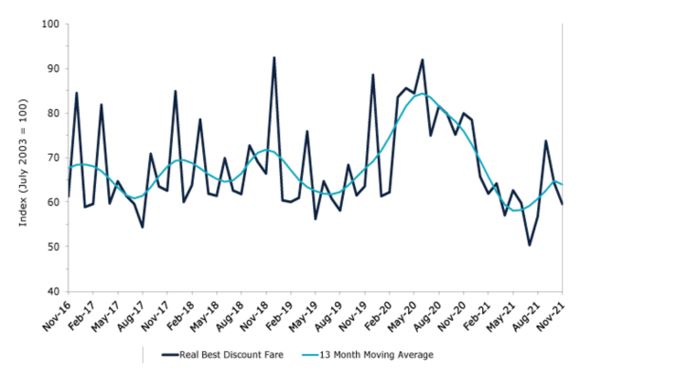 In the years before Rex’s entry into the jet market and ‘golden triangle’ of Sydney-Melbourne-Brisbane routes, Australia’s airlines have benefitted from minimal levels of competition, resulting in almost zero capacity growth and solid yields.

But they have also had to contend with significant infrastructure constraints at key airports, and scarce aircraft capacity was allocated to the optimum set of routes to maximise profitability. This meant that systematic, rather than tactical, fare discounting was rarely a consideration.

The situation today is entirely different, with still some unused and underused aircraft capacity, most of it burdened with monthly leasing and cash charges.  Leisure and, to a degree, VFR travel is price elastic, and it is generally agreed that they produce fare elasticities smaller than -1.

As the domestic duopoly had produced gradual price increases since capacity growth came to a virtual halt in 2013, it is debatable whether CY2019 levels of VFR and leisure travel represent true levels of “underlying” demand. In other words, fare discounting could increase underlying demand and, in effect, promote quicker growth rates for these segments. The continued complexity of international travel also provides a stimulus for further domestic travel.

In summary, the demand side of the equation is alive and well.

2. Supply – no major constraints on seat capacity over the medium term

During the period between 2017 and 2020 capacity supply issues became chronic for the Australian aviation industry.  Limiting capacity growth is very much part of the duopolistic playbook, leading to an optimisation of load factors and maximisation of yields.

However, supply problems became even more entrenched in the years before the pandemic, when Australia’s industry lost substantial numbers of pilots and first officers to better-paying jobs abroad.  Another factor was the growing infrastructure constraints at major airports along Australia’s East Coast.

With domestic capacity expected to be reintroduced gradually, and as competition intensifies, none of the supply issues are expected to bite for at least two years. In other words, it is fair to conclude that the supply side of the equation will not inhibit route development – at least for the medium term. (That is of course tempered by the way slot availability will be managed, particularly at Sydney.)

3. Cash – airlines are keen to get flying to generate revenues

The worldwide airline industry has been suffering since the start of the pandemic and continues to struggle from ongoing health and related policy and border issues, none more so than airlines offering RPT services.

Even though the Australian domestic industry was quick to stand down most of its operating staff, cash burn rates have remained substantial and fairly rapidly led to the administration of Virgin Australia.

Massive financial support packages were put together around the world, and in some cases flag carriers needed to return to at least partial government ownership.

What happened in Australia during the first half of 2021 made one thing very clear though: airlines are keen to get aircraft back into operation to offset cash burn rates with some form of revenue generation.

As such, at least over the short term, airlines are more likely to offer attractive air fares, since any flight generating more revenue than variable costs contributes positively to the bottom line.

At its core, route development is a meeting between demand for aviation services and supply of air capacity.

In a less-than-competitive industry structure, air service providers are likely to lose appetite for what is considered unnecessary risk and to pass on potential route development opportunities, since travellers will find alternative ways to reach their destination. For example, why serve Canberra-Sunshine Coast nonstop if travellers can use an existing Canberra-Brisbane service and drive from there or, alternatively, travel on a Canberra-Sydney-Sunshine Coast itinerary?

However, in an effective or threatened competitive market, air service providers are more likely to accept the risk of route development rather than handing a potentially profitable flying opportunity over to another airline.

Australia has lost Tigerair as a side effect of the Virgin Australia administration process, with Virgin itself likely to remain a smaller entity. However, Rex has entered the domestic jet market and Bonza is expected to take to the skies in mid-2022.

Moreover, with the opening of international markets expected to be slow and cautious and, very likely, interrupted process, Qantas will focus network development on the domestic and regional market, at least for the time being,

So, it is fair to say that even though the return to 2019 levels of capacity may not be instantaneous, the industry structure is more competitive than just two years ago, with four airlines operating large jet aircraft and another two operating 70-seat to 100-seat jets.

Australia’s domestic and regional aviation market is in for an exciting and potentially enormously valuable future.

Route development outside capital city-to-capital city markets has picked up already, and that’s before the new airline, Bonza, with a planned focus on regional markets, has even started operating.

This opens up the prospect for competition developing on two levels: both between airlines and - to an extent never previously possible - also between airports as they seek to capture and secure additional and new air services for their local communities.

The outcome for those cities that are active in their promotional activities could be a once in a generation breakthrough in terms of regional development.

Anchoring one or more airlines to deliver service in this new environment could transform local economies, with an impact that goes much deeper than simply an air service.