RAK Airways confirmed plans to resume services from 10-Oct-2010 with two scheduled destinations initially: Jeddah in Saudi Arabia and Calicut in India. RAK Airways launched operations in early 2007, but suspended scheduled services in May-2009 due to the global financial crisis. However, Chairman, Sheikh Omar bin Saqr Al Qasimi, stated conditions have now improved, especially in terms of international demand, meaning now is the right time for it to make a “spectacular re-entry into the market”.

Sheikh Omar stated RAK’s main aim is to serve the Ras al Khaimah population. The carrier consequently selected Calicut as one of its first destinations due to the large number of expatriate workers in the emirate from southern India. Jeddah was meanwhile selected to cater for the emirate’s Hajj pilgrims. Each route will be operated four times weekly.

RAK Airways plans to launch services to at least five destinations within a year. Destinations under consideration include those in the GCC, Levant, Indian Subcontinent, Africa and CIS. Before suspending scheduled operations, it flew to Colombo, Chittagong and Dhaka. 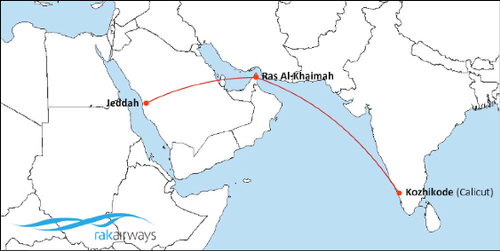 Sheikh Omar said the carrier will play an important role in promoting Ras al Khaimah as a tourist destination. The emirate plans to quadruple tourist numbers by 2012 and increase its number of five-star hotel rooms from 1,400 to 7,500.

The airline will offer complimentary in-flight meals and a 30kg allowance for checked baggage, with fares comparable to those of budget carriers, although the carrier insists it is not an LCC. There had been speculation the carrier was going to be restructured into an LCC, based on similar principles to Sharjah-based Air Arabia. However, it confirmed that it is not an LCC, with Shiekh Omar stating it will “compete on a commercial basis as a full-fledged airline with a service equal to the price they pay. We are not low cost but we will also not compete on the high end of the market. Mid-ranged – this is what we are aiming”. Fares will start at USD2.72 (AED10.00).

The airline is leasing two B737-400 aircraft in a one-class configuration to resume operations. Sheikh Omar stated the carrier will start with the two aircraft and then “judge our situation”, adding that the carrier doesn’t “want to go very positive until we analyse our situation”. CEO, Omar Jahameh, added RAK is in negotiations for new aircraft and is “keeping its options open” in terms of aircraft leasing and acquisitions. RAK has ordered four “smaller and more economical” B737-800s, plus two options in 2008 – a contract that is under negotiation with Boeing. The aircraft, ordered at a list price of USFD300 million, are currently scheduled for delivery in 2011. The carrier had a fleet of three B757 aircraft, including two for charter operations. Two were sold, while the remaining B757 will continue to be deployed on charter services. Earlier this year, RAK operated twice weekly Kabul-Frankfurt and once weekly Kabul-Dubai services on behalf of Ariana Afghan Airlines.

RAK has also launched a new brand to coincide with the resumption of services. Mr Jahameh stated the new brand represents the new airline: “upbeat, full of character, fun and friendly however without compromise on safety or quality”. The carrier also recently relaunched its website.

RAK Airways, which has no plans for an IPO, hopes to reach break-even in the first year. Sheikh Omar stated this would require a load factor of around 50-60%. The airline is owned by the Ras al Khaimah Government and approximately 90 private shareholders, with a paid up share capital of USD543.6 million (AED568 million).

The carrier may struggle re-entering what is already a highly competitive market due to the UAE’s hub status. The region is home to established full-service carriers, Emirates and Etihad Airways, as well as LCCs, Air Arabia and flydubai. Just under 100 foreign carriers also operate scheduled services to/from the UAE. 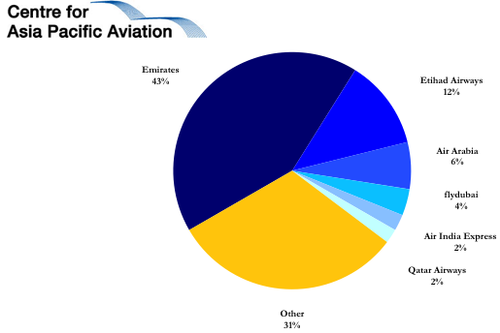 Traffic in the region continues to grow, offering an enticing playing field for RAK. However, capacity is also on the rise, with IATA stating Middle East carriers continue to add the largest amount of capacity compared with other regions worldwide. In Aug-2010, traffic (RPKs) in the Middle East grew 12.3% year-on-year on a 13.0% increase in capacity (ASKs), making it the only region in which capacity expansion outstripped demand for the month. 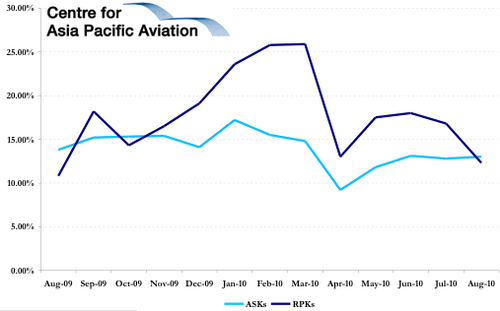 Furthermore, Ras Al Khaimah has only a small population of 250,000. To combat this, RAK plans to operate a free shuttle service for passengers travelling from Dubai, Sharjah and other neighbouring emirates for each flight, to allow for easy access to Ras al Khaimah International Airport (RAKIA). However, it is questionable as to whether such a service will be effective when passengers can already travel to Jeddah and Calicut from other UAE airports. There are five carriers already operating services between the UAE and Calicut, including Air India Express, Emirates, Air India, Air Arabia and Etihad Airways.

Meanwhile, there are eight carriers operating scheduled services from within the UAE to Jeddah.

RAKIA expects passenger numbers to grow to approximately 2.5 million p/a by 2012. The airport handled 242,000 passenger in 2008. RAKIA is currently being refurbished to handle increased capacity and aims to increase capacity to 3 million passengers p/a within 15 years, requiring an investment of USD165 million.

There are currently only two carriers operating scheduled services to RAKIA: Oman Airways and Trast Aero, operating services from Muscat and Hargeisa, respectively.

The airport is also preparing for a sharp increase in passenger numbers in Oct-2010 and Nov-2010 as airlines launch Hajj services via the airport. RAKIA is expecting up to 12 daily flights during the period from destinations in Afghanistan, India, Indonesia, Kazakhstan and Spain. Passenger numbers could potentially reach 600 per day.