Domestic yields at the Qantas Group have soared in the first part of the financial year with the company recording a 9.4% yield increase year-on-year in Jul-2011, its second highest monthly growth in a decade. The period corresponds with the grounding of Tiger Airways Australia, which removed approximately 12,400 seats from the market daily and saw airfares significantly increase.

Yields – calculated across all of the Group's domestic operations – continued to show strong growth even after Tiger resumed services in Aug-2011, albeit with only 10% of its pre-grounding seats. Qantas domestic yields grew 5.8% year-on-year in Aug-2011, the 15th highest monthly growth in the 117 months Qantas has reported figures.

Bruce Buchanan, CEO of Qantas' Jetstar unit, has acknowledged the upward pressure. Domestic yields across all Australian mainline carriers can be expected to grow highly over the next few months as Qantas removes capacity due to union strikes, but will come at the expense of decreased revenue at Qantas. For Virgin Australia, yields will grow with revenue.

A correlation between monthly changes in yield and the lowest economy fares in the market (as measured by the Bureau of Infrastructure, Transport and Regional Economics) has been evident over the past year, but grew closer starting in Jun-2011. Airfares in Jul-2011, calculated the previous month, peaked owing to the popular flying time of school holidays and increased price of fuel, reflected in ticket prices. But yields grew a disproportional 9.4% year-on-year despite yield growth remaining under 4% for the previous year. Qantas on domestic flights fully recovers the cost of fuel on with surcharges.

While airfares dipped in Aug-2011 as school holidays ended, they were still up over previous years, indicating a continuing pressure on airfares owing to reduced capacity from Tiger. Increased fares without higher costs generate higher yields. 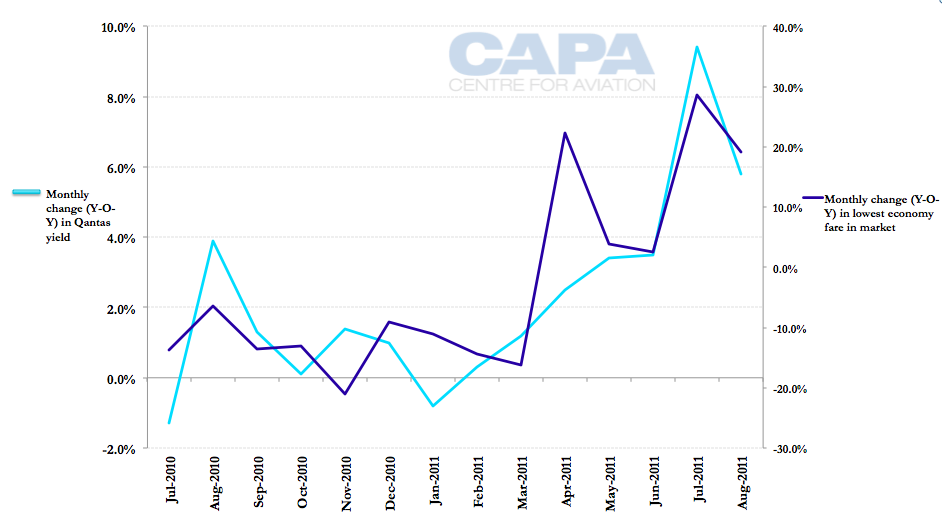 The 15 highest months of yield growth at Qantas can broadly be attributed to three factors. The largest is yield growth in eight months over a period between Oct-2001 and Aug-2002 as a result from the Sep-2001 collapse of Ansett. Qantas noted in Mar-2002 that despite the preceding half-year that saw the 9/11 terrorist attacks affect international aviation, its domestic operations grew and "in this difficult period Qantas' financial performance has been outstanding".

See related article: Ansett’s collapse set decade of positive change for aviation in Australia – and beyond

The second largest growth was the four months from Aug-2005, which Qantas attributed to the introduction of fuel surcharges as the price of oil became volatile. Surcharges in place from Sep-2005 ranged between AUD19 and AUD26 (USD19.66 to AUD26.90) for domestic flights. "These higher fuel surcharges are reflected in increased yields," Qantas said in Dec-2005, but added it still faced a shortfall.

The two months of yield growth attributed to Tiger's grounding are the third largest reason for yield growth. The all-time highest monthly year-on-year yield growth was a one-off occurrence in Jul-2007.

Jetstar's Mr Buchanan, at the company's annual results briefing in Aug-2011, acknowledged the upward pressure on domestic airfares. “We did see a positive lift in the six weeks they [Tiger] were grounded. Whether it’s significant for the full year we’ll have to wait and see over the next few weeks.” Mr Buchanan has not provided commentary since then.

Virgin Australia CEO John Borghetti said in Aug-2011 that his carrier, priced above Jetstar but below Qantas, had not yet noticed a continuing trend of increased passengers due to Tiger's grounding and gradual resumption of services. He did, however, disclose Virgin accommodated approximately 10,000 passengers in the wake of Tiger's grounding, but those passengers typically travelled on reduced-fare tickets. Virgin's yields have seen more significant change from the introduction of flexible tickets, Mr Borghetti said.

The Qantas Group can continue to expect yield growth as Tiger's schedule remains diminished – it is currently operating at one-third of its former size – and its own removal of domestic capacity increases demand on its remaining flights. The latter event has developed in the past month as aircraft maintenance has fallen behind schedule, forcing aircraft to be withdrawn from service. Qantas attributes the work shortfall to ongoing union action over pay and job security disputes.

While the yield growth during and after Tiger's grounding would have resulted in increased revenue, growth over the next few months will come at the expense of less revenue. More worrying for Qantas is if its traditionally loyal passengers select Virgin Australia instead due to the airline's decreased capacity, and if once the Qantas issues settle down they elect to continue flying with Virgin Australia, who is transitioning to being a full service carrier with business class and complimentary food and drink.

Virgin Australia does not report monthly yield data as Qantas does, but it is likely Qantas' Jetstar unit – priced most similarly to Tiger – saw the highest yield growth after Tiger's grounding. As fares remain high over previous years, yields can be expected to increase as well, but going forward on the subject of yields, it is Virgin Australia who stands to benefit most as yields and revenue increase. It will take a few months from the conclusion of industrial action at Qantas to see if a fundamental shift in passenger traffic and resulting yields occurs between Australia's two carriers competing neck-in-neck with each other.

Note: Yield calculations are based on monthly traffic summaries submitted by Qantas since Apr-2001. Qantas did not report monthly statistics for the months of Aug-2001, Sep-2001, Jun-2007, Dec-2009, Jan-2010 and Jun-2010. While Qantas notes the statistics are preliminary, no corrections were issued. A minor accounting change occurred for Sep-2005 figures. Re-calculated figures were provided for Jul-2005 and Aug-2005 and were used in calculations.