A much improved financial performance from Qantas’ international operation along with strong results from Jetstar and Qantas Loyalty has allowed the airline to return to the black, reporting a profit after tax of AUD111 million (USD113.6 million) for the first six months to 31-Dec-2012, a 164% turnaround from the same period in 2011.

All operating segments in the group were profitable with the exception of the Qantas International segment. However losses in this segment reduced to AUD91 million (USD93 million) million from AUD262 million (USD268 million).

In a generally unexciting result – not a bad thing these days – Qantas continued to show a profitable streak, with its virtuous frequent flyer programme continuing to stand out as a cash cow. 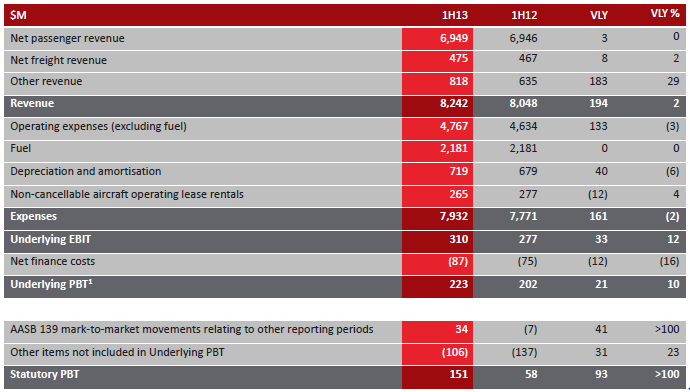 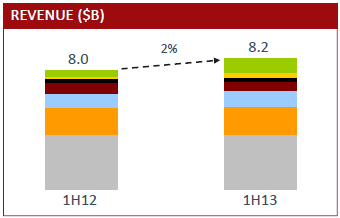 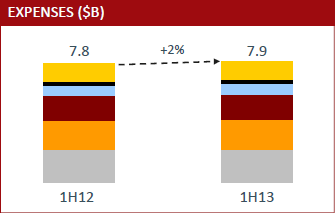 Qantas CEO Alan Joyce said: “The operating environment remains complex and volatile, but we are now beginning to realise the benefits of the tough decisions that we have made over the past 18 months”.

Qantas can now focus on growing Asia, with Europe accounted for

Growing its Asian business is a major priority for the Qantas Group now that it has all but completed its union with Emirates.

Shifting the hub for its European flights from Singapore to Dubai in effect frees up significant capacity on the Australia to Singapore leg. Previously nearly half the seats were reserved for passengers flying on to Europe.

Qantas is growing capacity between Australia and Singapore by 40% and 10% into Hong Kong with improved schedule timings to allow for better onward connections on intra-Asia routes on partner carriers via Singapore, Bangkok and Hong Kong.

As a result of the retimed services to Singapore an additional 25 intra-Asian connections are opened up, while also adding a net 19 new connections via Bangkok.

But even with these changes, Singapore Airlines still dominates the Australia-Singapore market with 50% of capacity, and growing, compared to Qantas’ 22%. 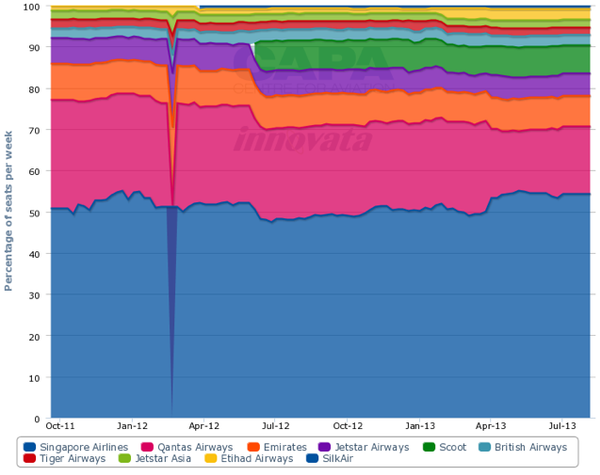 Qantas plans to expand operations to Asia by adding frequencies on existing routes as well as adding more destinations in particular to China and Southeast Asia. The carrier points to the 14 787s on order to support that growth.

Mr Joyce said Qantas is also working to improve the connectivity of the Jetstar networks to expand its presence in Asia.

“The Qantas operation in Singapore will be extensively using also Jetstar into China and into other markets. When Hong Kong gets established and as Japan gets bigger we will also be using those networks.”

However, there are question marks over whether passengers who have chosen to book on a full service carrier will accept being transferred to a LCC part way through their journey. Corporate clients in particular tend to be resistant and actively book away from Jetstar.

The need for a “red tail” operation in Asia remains – something Qantas is looking to achieve through a combination of alliance partnerships and expanded network. 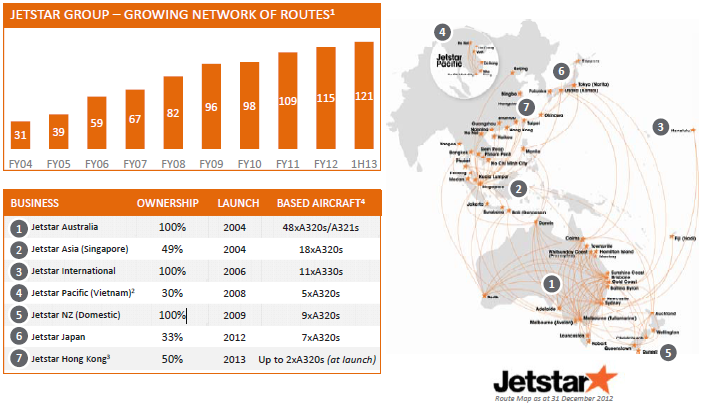 Jetstar Japan, a joint venture with Japan Airlines, Mitsubishi and Century Tokyo Leasing Corporation, has made a strong start, carrying 600,000 passengers in its first six months to 31-Dec-2012 across five destinations. The Japan operation will add six new markets in the second half of FY2013, with its fleet of seven A320s increasing to 13 by the end of the financial year.

The Japanese venture is losing money as expected, but management is happy with the performance of the business which has carried more than 600,000 in the first six months of operation, has a higher seat factor than competitors and the lowest cost base.

Qantas anticipates it will take three years for each of the Asian Jetstar ventures to reach breakeven.

“It is delivering what we expected in terms of the costs and where it stands,” Mr Joyce says.

Jetstar Hong Kong, which is a partnership with China Eastern is working its way through the complex regulatory approval process and is expected to launch services in the second half of 2013, though Mr Joyce was not prepared to be more specific.

“But we are confident that it will start this year. I can’t pick what month it is going to be,” Mr Joyce said. A management team has been established and a CEO and CFO have been appointed.

The approval process has been delayed by recent changes in the Hong Kong and Chinese governments. The move is also predictably being met with stiff opposition from Cathay Pacific which is not keen to have Qantas, and fellow oneworld member, operating on its door step.

Qantas and China Eastern are also exploring options for a deeper partnership to connect their Australian and Chinese networks.

Individually, China Eastern and Qantas are the smallest players in the Australia-China market, but combined they would represent about 37% of capacity, making them a formidable opponent to China Southern’s 43%.

Jetstar has one of the highest levels of ancillary revenue in the industry, increasing to AUD31.7 (USD32.4) per passenger in the half, while unit costs improved 2%. Underlying demand in Jetstar Asia businesses is reportedly good, although with Singapore becoming an increasingly competitive market.

The Qantas International segment made an underlying EBIT loss of AUD91 million (USD93 million) for the half year, turning around the AUD262 million loss in the first half of FY2012, as the carrier withdrew from unprofitable routes, retired aircraft and consolidated operations.

As part of the long-haul transformation programme nine Boeing 747-400s were refitted with A380-standard cabins while Qantas has worked to strengthen alliances with American Airlines and LAN. Mr Joyce sees the American Airlines-US Airways merger as being very valuable for Qantas: “I have already talked to (US Airways CEO, also to be American Airlines CEO) Doug Parker and we are very confident that improved access to US East Coast markets that US Airways adds will be very good for Qantas.”

The cornerstone partnership with Emirates will take effect on 31-Mar-2013, subject to final approval from the ACCC. Bookings on the new joint network during the second week of sales were five times greater than for the same week in 2012 when the JSA with British Airways was still in effect. This however should be seen against the release of pent up demand following the hiatus between ending sales under the British Airways partnership and being permitted by the ACCC to commence sales on Emirates over the new Dubai hub.

Transitioning hubs from Singapore to Dubai cost Qantas between AUD40 million (USD41 million) and AUD50 million (USD51 million) mainly in lost revenue incurred between Oct-2012 and end Jan-2013 when Qantas had services for sale on the route, but it has only been able to sell them jointly with Emirates for the last three weeks after receiving interim permission to do so from the ACCC pending its final determination on the alliance. That had impacted the forward booking profiles for those services.

With a European solution in place, Qantas is now able to turn full attention to Asia where it has announced extensive network and schedule changes to improve connections on partner carriers in key hubs of Singapore, Bangkok and Hong Kong.

“Taken together, these measures provide a platform to return Qantas International to profit and, over the long term, target growth opportunities,” Mr Joyce said.

Qantas is sticking with its forecast that the international business will reach breakeven by FY2015.

Domestic yields are under pressure due to around 10% market capacity growth outstripping demand, leading to an oversupply of seats. That situation was now beginning to ease as passenger numbers improved.

The domestic segment reported a substantial reduction in profitability as the effects of this capacity battle with Virgin Australia began to bite and Qantas responded to maintain its "profit-maximising 65%" line in the sand market share. The resulting pressure on yields saw the Qantas mainline domestic operation’s underlying EBIT fall AUD110 million (USD113 million) to AUD218 million (USD223 million).

The corporate market is holding up, with Qantas maintaining its 84% market share of the lucrative sector, renewing 40 accounts and winning 39 new accounts, including four that had been lost to Virgin Australia.

Qantas expects group domestic capacity to increase by between 5-7% in the 2H2013 compared to the same period last year, but Mr Joyce says the carrier has the flexibility to “zero” the increase or add more capacity if required. Group capacity overall is expected to increase between 0.5%-1.5% period on period.

LCC subsidiary Jetstar was not immune to the domestic capacity oversupply situation, which together with start-up costs for Jetstar Japan, which launched in Jul-2012 and yet to launch Jetstar Hong Kong, saw underlying EBIT reduce AUD19 million (USD19 million) to AUD147 million (USD150 million) despite revenue increasing 12%.

Qantas Frequent Flyer members reached nine million members in Jan-2013. Qantas also announced the programme’s membership cards will be replaced with a debit card, called “Qantas Cash” which will also be used for check-in and lounge access. The funds will be held in escrow, but Qantas will benefit from accrued interest, according to Qantas CEO Loyalty, Lesley Grant. 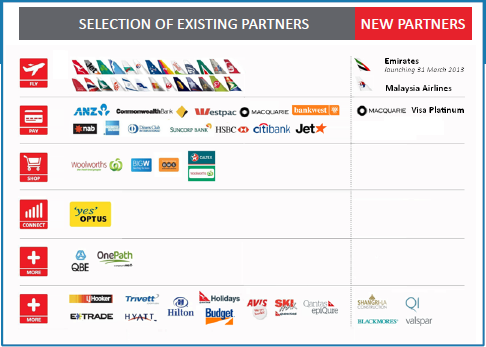 The A330 refit is designed to attract the premium market

In a bid to cement its position on the Asian and domestic networks, Qantas will refit its entire fleet of A330 aircraft with lie-flat business class seats, a refreshed economy cabin and new inflight entertainment offering.

The refurbishment programme will start in late 2014, coinciding with “C” check maintenance where possible in order to maintain seat availability.

Ten A330-300s will operate between Australia and Asia, and 20 A300-200s will fly between Perth and the Australian east coast. The new seats on the A330 will be a new model and different from those on board the current international fleet.

An additional five Boeing 737-800 aircraft are also to be added to the domestic network in 2014 and the leases on two existing 737-800s extended this year.

Qantas prepares for a challenging market, in reasonably good shape

In a generally unexciting result – not a bad thing these days – Qantas continued to show a profitable streak, with its virtuous frequent flyer programme continuing to stand out as a cash cow. A 65% domestic market share is to die for and with a cash balance of AUD3.1 billion, a reduced capex requirement, a relatively young, average eight year old, fleet and – apparently – a strategy that is now growing solid roots, the carrier remains in a strong position.

It is a serious relief for the group that the distraction of fighting a losing battle on international long haul is now largely resolved, as the Emirates partnership starts to function, delivering a valuable product for corporate and leisure passengers alike.

The ability to focus on the main international game, in Asia, will be welcome. This is an obvious assignment, but far from a straightforward one to achieve.

Since the dark day in Jun-2012 when the company's share price sank below AUD1, a healthy rise has restored market profile, closing on 21-Feb-2013 at AUD1.62.

Mr Joyce will not be too concerned that his predecessor, Geoff Dixon and partners, collected an AUD18 million profit on their low end purchase; the threat from his "consortium", seeking again to maximise the value of the Qantas Group's ingredients, has now gone away as they captured their profit. The de-integration idea will recur, as Jetstar and the FFP continue to deliver solid returns and high growth. But for now the main game is keeping a reinvigorated Virgin Australia at bay and entrenching an Asian presence for the future.