Peru’s domestic aviation market has opened up, which is a good sign for aviation in Latin America. However, similarly to other areas in the region, the country is still battling rising case numbers of COVID-19.

Despite the rising case counts, Peru’s low cost airlines seem somewhat optimistic about the restart of flights. The country’s domestic market has changed during the last year as a couple of larger airlines have ceased operations, leaving the market leader LATAM Airlines Peru and two larger low cost operators.

Another airline aims to enter the Peruvian market, with JetSMART outlining ambitions to launch a new subsidiary in the country. Those evaluations reflect a certain optimism about Latin America’s potential over the long term.

Peru’s airlines restarted domestic flights on 15-Jul-2020 after the country’s aviation system had been shut down for nearly four months. The low cost operators Viva Air Peru and Sky Airline Peru took to their LinkedIn accounts to outline their operations.

Viva reinstated flights from Lima to Iquitos, Cusco and Piura. The airline remarked that bit by bit, it would regain passenger trust.

On 16-Jul-2020 Sky stated that it had begun 10 flights to Cusco, Iquitos, Lima and Pucallpa and would add Juliaca, Piura and Trujillo over the coming days.

Those airlines were the second and third largest domestic operators in Peru during 2019 measured by passengers carried. Sky only launched operations in Apr-2019. 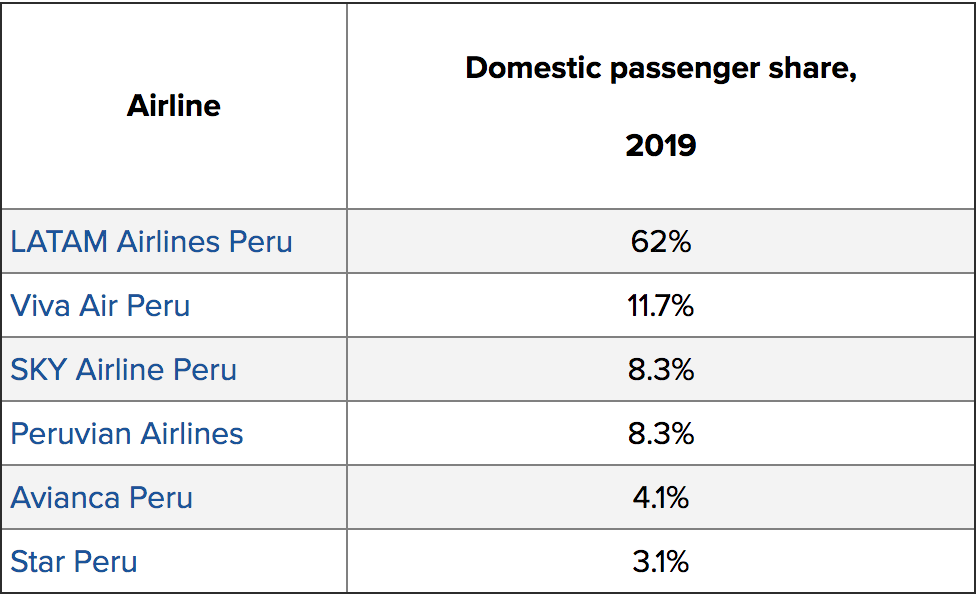 The optimism occurs as Peru continues to battle rising cases of COVID-19.

Even though Peru was one of the first countries in Latin America to institute a lockdown, it is struggling to contain the virus. It has the second largest case count in South America behind Brazil, at approximately 342,000 in mid-Jul-2020. 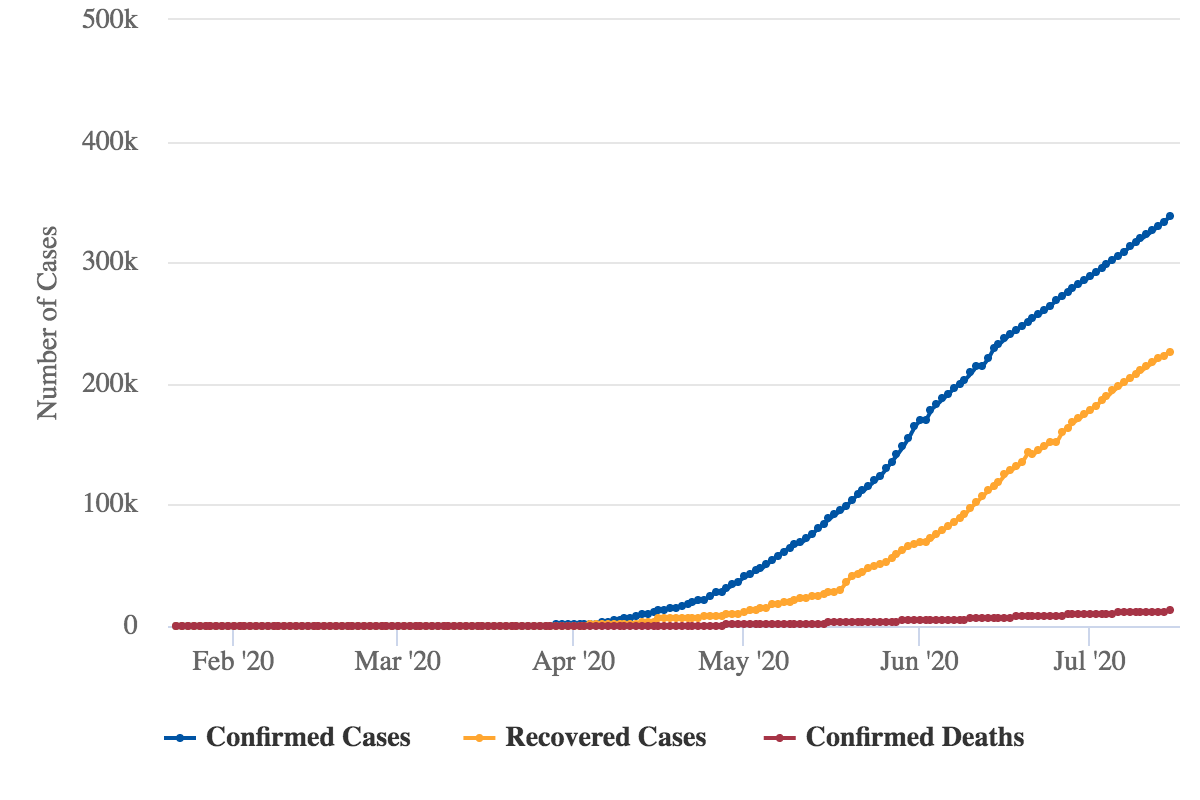 Dynamics in Peru's domestic market have shifted during the past year

Two of the country’s airlines have exited the market during the past year.

Peruvian Airlines ceased operations in Oct-2019, and Avianca has opted to exit the market as part of its Chapter 11 bankruptcy protection.

At one point, Avianca and Peruvian were trading places as Peru’s second largest airline, but Avianca was eliminating domestic routes within Peru, and then it filed for Chapter 11, and Lima-Cusco was the only domestic route the airline was operating in Peru before it dissolved its Peruvian subsidiary.

Essentially, rationalisation in the Peruvian market was occurring before the COVID-19 pandemic, which in some ways could be beneficial as airlines attempt to rebuild once the country lifts air travel restrictions.

But some Latin operators are seeing opportunities sprouting from the COVID-19 crisis.

JetSMART has declared plans to launch a new subsidiary in Peru, and aims to launch operations in early 2021.

JetSMART Chile debuted in Jul-2017 and the ultra low cost operator launched operations in Argentina during Apr-2019. Indigo Partners, which owns JetSMART, in the past has outlined numerous opportunities in Latin America, including Bolivia and Paraguay.

Indigo Partners still believe that Latin America has a bright future that is obscured at the moment by political and COVID-19 issues, the company’s managing director William Franke recently told a recent CAPA masterclass.

JetSMART’s interest in launching a domestic operation in Peru seems logical, given the country’s solid passenger growth before the crisis. Peru’s trips per capita in 2018 were 0.6, and the country has a population of approximately 32 million.

If JetSMART does enter the market during the next couple of years, it would be the third low cost airline operating within Peru, leaving LATAM Airlines Peru as the only full service airline in the country.

LATAM Airlines Group is currently restructuring under Chapter 11, but it has long been the largest airline operating in Peru. The country represented 8% of the LATAM’s trailing 12M revenue as of Sep-2019, and 15% of its ASK deployment by country.

The duration of Latin America's current challenges is an unknown

The big unknown for companies looking to take advantage of some opportunities stemming from the COVID-19 crisis is the trajectory of traffic recovery in Latin America. Weak economies could hurt the pace of middle class expansion, which is a pillar for the business case of low cost operators spreading the model across the region. The International Monetary Fund (IMF) has forecast that GDP in Latin America and the Caribbean could contract by 9% in 2020.

The challenge is that if discretionary income has all but dried up, low fares may not be enough to entice a cautious public to travel again until economies stabilise.

But CAPA partner OAG recently concluded that while barriers to entry for a new airline in South America have not been low in many years, the numbers of aircraft being parked and the general downsizing of the industry could result in an abundance of aircraft and qualified flight crews readily available.

“And competition may be exhausted”, said OAG. “Existing competitor airlines will be working to recover rather than expand, aiming to build balance sheets before focusing on growth”.

Some airlines are looking for opportunities in the COVID-19 crisis

With a full recovery in demand for air travel not expected for at least two to three years, most airlines are working to determine their optimal size and are making tough decisions about their operations.

But some airlines believe that the crisis is presenting certain opportunities, and are moving to broaden their reach as other operators shrink.