JetSMART is casting a wide net through South America for potential expansion, but the ULCC start-up aims to create a stable platform in Chile before aggressively expanding to other countries in the region. However, the airline plans to use rights it has secured for service from Santiago to Lima in the near future.

Backed by the ULCC specialist Indigo Partners, JetSMART is learning the nuances of operating within Latin America, including navigating complex ownership rules imposed by some countries, and establishing a home market base where rivals have already positioned themselves to compete with new low cost entrants.

Although there has previously been some discussion about Indigo making moves in the Canadian market as aspiring ULCCs are working toward a launch, the company is not yet ready to commit to Canada as it continues to study the country’s regulations governing foreign airline ownership.

JetSMART is not surprised by rivals' competitive response in Chile

Indigo launched JetSMART in Chile during Jul-2107, joining other low cost new entrants Volaris Costa Rica and Viva Air Peru that have debuted within Latin America during the past year. Copa has also transitioned the bulk of Copa Airlines Colombia’s operations to a new low cost platform, Wingo.

Indigo settled on Chile for several reasons, including its having a government that acts reasonably with respect to foreign ownership, and an operating environment where opportunities exist to entice bus passengers to travel by air. Chile allows 100% foreign ownership of its airlines.

On most of those routes JetSMART is competing with Chile’s incumbent airlines, LATAM Airlines Chile and Sky Airline. For the seven months ending Jul-2017, LATAM captured a 70.8% share of Chile’s domestic market and Sky garnered a 27% share, according to data from Chile’s JAC. Domestic passenger levels in Chile during that period increased by 3.2% to 6.5 million.

Indigo's founder and Managing Partner, William Franke, speaking at the recent CAPA Latin American Aviation Summit in Cartagena, Colombia, stated that JetSMART’s strategy was passenger stimulation rather than stealing customers from rivals. He remarked that Sky had done a good job supporting passengers in the low cost sector.

Approximately two years ago Sky embarked on a transition to a low cost model, and the company’s CEO Holger Paulmann (in an interview with CAPA TV during the summit) stated that Sky’s unit cost on a stage adjusted basis were at the same level as those of ULCCs in the northern hemisphere. For 2H2017, US ULCC Spirit’s unit cost excluding fuel and special items was USD5.73 cents.

Mr Franke told CAPA TV that the competitive response to JetSMART’s launch had been predictable. Both LATAM and Sky have developed a tiered fare structure, with the lowest rung designed to target cost conscious travellers.

See related report: LATAM Airlines Group is the latest in the region to build an arsenal to combat the ULCC threat

JetSMART believes there are opportunities in smaller markets – Bolivia and Paraguay

JetSMART aims to become another competitor on service between Santiago and Lima after recently securing rights, through an auction process, to serve the route.

Mr Franke stated that JetSMART would likely announce service on the pairing during the next few months, and Lima was the first logical route for international service. He cited high traffic volumes between Santiago and Lima. Santiago is Peru’s largest international market for inbound traffic. 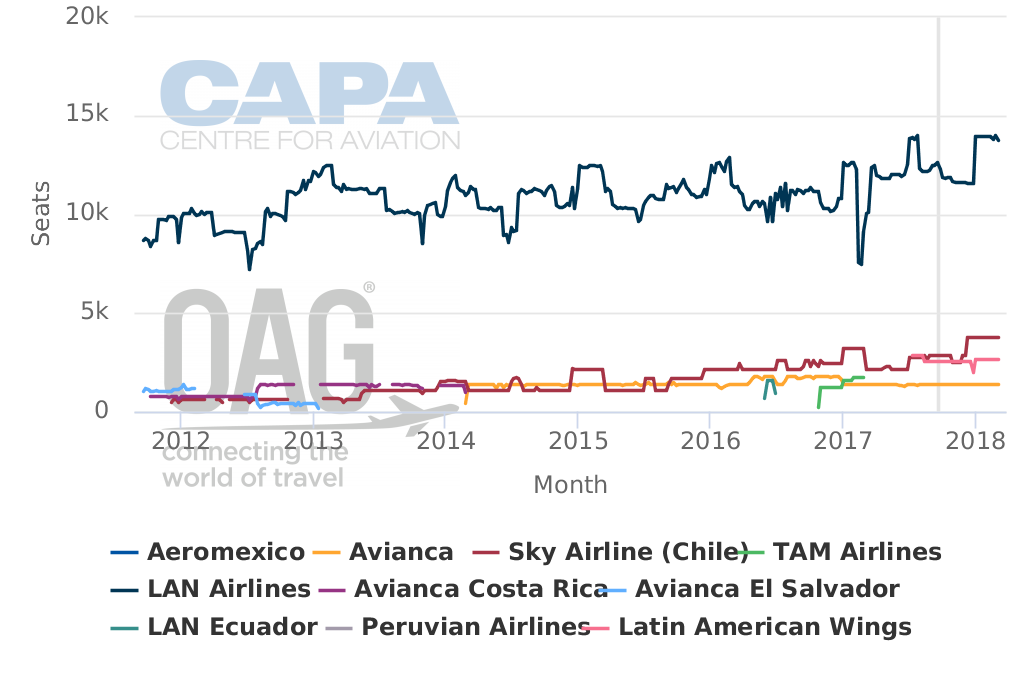 Over the longer term, Mr Franke stated that Bolivia, Paraguay and Argentina were the next logical markets for JetSMART. He also believes Colombia could be a possible market at some point, and Brazil is a hard market to ignore.

According to Mr Franke, while Bolivia and Paraguay are smaller countries, there is a requirement for travel in those regions. Bolivia has been recording solid economic growth, with forecasts showing GDP growth of more than 4% for 2017.

Boliviana de Aviación is Bolivia’s national airline, operating services to 12 domestic markets, one each in North America and Europe, and four intra-regional international routes in Latin America. The airline has a nearly 66% seat share of Bolivia’s system seats for the week of 18-Sep-2017. Bolivia is holding a presidential election in 2019, so it is likely JetSMART could wait until after the election cycle before expanding into the country. 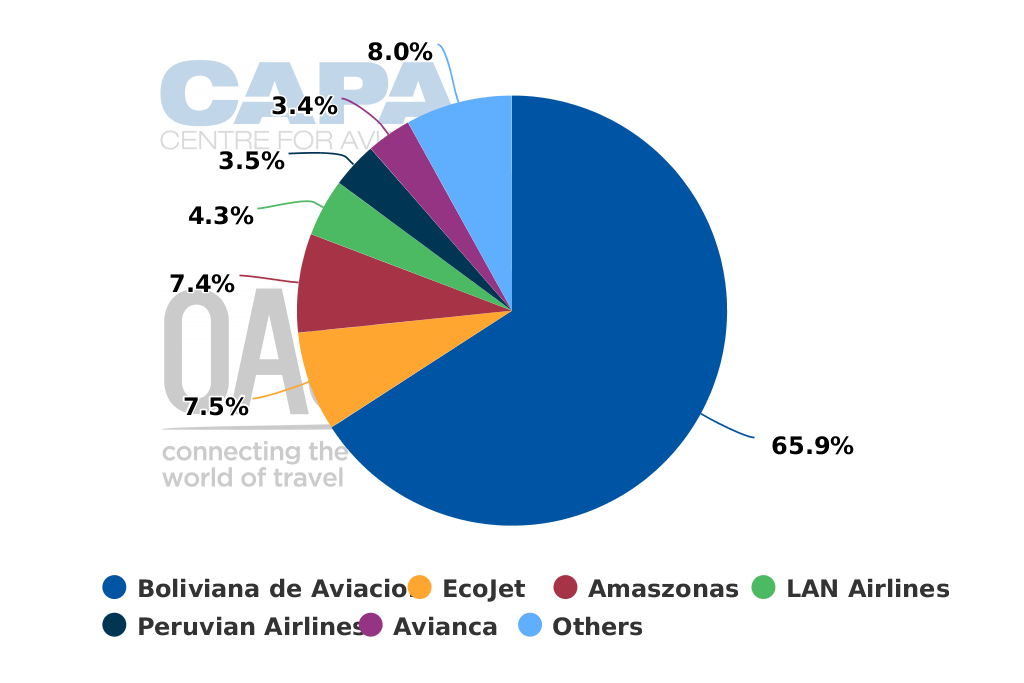 LATAM is the largest airline operating between Chile and Bolivia for the week of 18-Sep-2017, holding a 90% share of seats between the two countries. It operates services from Santiago to La Paz.

Paraguay is one of the smallest markets in Latin America. On a system-wide basis, 95.6% of the country’s seats are deployed into international markets, and LATAM Airlines Paraguay is the country’s largest operator based on system seat deployment for the week of 18-Sep-2017. It operates service from Santiago to Paraguay’s capital of Asunción. 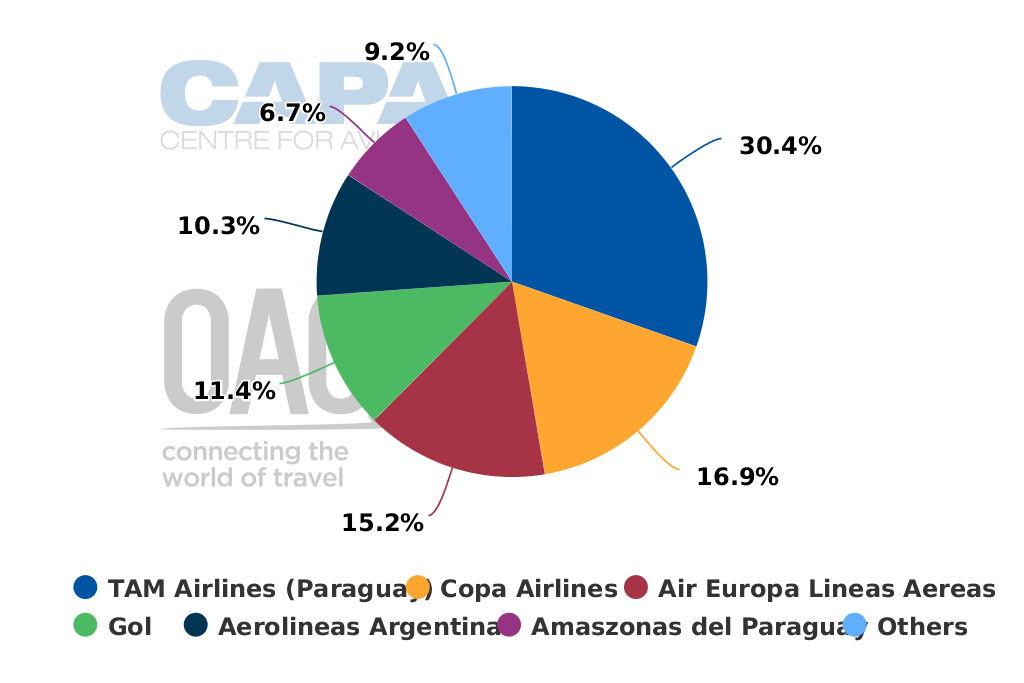 Mr Franke noted that cross border flying from Chile to Bolivia and Argentina is a logical step for JetSMART; however, he admitted there is a “feeding frenzy” in Argentina as hopeful airlines aim to capitalise on a more liberalised stance adopted by a new government, which took control of the country in late 2015.  Flybondi, Norwegian and Avianca Argentina are just three of many airlines hoping to tap pent-up demand in Argentina.

Mr Paulmann of Sky has concluded Argentina’s domestic market is not ready for a low cost or ultra low cost airline for two reasons – a minimum fare regulation remains in place in Argentina, and monopolies held by suppliers for ground handling and fuel create cost challenges for airlines operating in the country.

There is no set time frame for JetSMART to launch flights to Argentina, and Mr Franke stated that Indigo was not afraid of competition. But for now, the company is spending time with Argentinian regulators to “try to create a model that meets their expectations and is profitable to us”.

Although Mr Franke believes examining opportunities in Latin America’s largest market, in Brazil, is unavoidable, in his view the country presents challenges in government oversight of private capital. Investors in Brazil “have to be brave”, he remarked.

In late 2016 the Canadian airline Enerjet announced partnership with Indigo as it worked to launch a ULCC – FlyToo. Along with a fellow ULCC start-up, Canada Jetlines, Enerjet won an exemption from Canada’s foreign ownership rules, which stipulates that foreign entities may hold a 49% stake in each of the companies.

See related report: Canada’s government paves the way for ULCCs Enerjet and Jetlines to jump into the market place

Mr Franke explained that Indigo had spent a lot of time evaluating the Canadian market. He stated that the country has very arcane foreign ownership rules, and “laws around foreign investment in airlines in Canada are pretty fuzzy”. Indigo has spent the past 18 months attempting to understand those regulations.

While Canada is a smaller market in terms of absolute travellers, Mr Franke believes it is a market that should be examined closely. “You have hundreds of Canadians driving across the border to the US to pay lower fares. That tells you something”, he said.

Canada’s second largest airline, WestJet, has declared its intent to debut a new ULCC in 2018 to compete with the aspiring ULCC start-ups in the country and capture cross border spill traffic. WestJet has estimated that approximately 5.5 million Canadian travel across the border to access ULCC capacity from those border airports.

After establishing ultra low cost airlines in several countries worldwide, Indigo decided to tap Latin America’s potential with the creation of JetSMART in Chile, having one of the more liberal governments in the region.

Other areas in Latin America are not as business friendly, and Indigo is aware of those realities. As it looks to expand JetSMART beyond Chile, Indigo will carefully craft a strategy to navigate the nuances of spreading the ULCC model in one of the most promising regions for low cost growth worldwide.