When Dubai took over from London Heathrow as the world’s premier international airport in 2014 it seemed to signify a significant shift in pre-eminence in the air transport industry as a whole.

But events have a habit of influencing such calculations and the COVID-19 pandemic has done that, with US airports occupying the top seven positions as measured by passenger numbers in 2021 and China’s Guangzhou Baiyun International being the busiest airport in the world the previous year.

As a degree of normality has returned over the last three months or so Heathrow has reoccupied that #1 position, with Amsterdam Schiphol and Paris CDG airports not far behind.

Tourism, leisure demand generally and plenty of low cost capacity (all too often on flights that are being cancelled on account of insufficient supply) is driving demand, and the head of one influential industry body is saying that the recovery should be complete by 2024.

But that doesn’t allow for further events…

Airports Council International Europe (ACI Europe) and OAG have revealed that London Heathrow Airport has resumed its long-standing position of being the world’s busiest international airport as measured by point-to-point passengers (i.e. not taking into account transit passengers) and by future seat capacity measured in the week commencing 16-May-2022.

Even so, the 2019 passenger throughput figures remain elusive for most airports.

While the news may be good for Heathrow - which held the title for many years until overhauled by Dubai International in 2014 and was an airport adversely impacted by the pandemic to a greater degree than most competing airports in Europe - the news is not so good for many others.

Focusing on 2021, there was the relatively new Istanbul Airport, which opened in Oct-2018 ranked second, followed by Amsterdam Schiphol, Frankfurt International, Paris CDG, and Doha before Heathrow in seventh place - only just ahead of Antalya, the Turkish holiday resort airport.

Figures in 2021 for all passengers dominated by US airports

There is a considerable dichotomy in these statistics when they are compared to those for the world’s busiest airport overall, which in 2021 was dominated by US airports, where domestic travel was not so severely impacted.

Indeed, the top seven airports for overall passenger traffic in that year were all in the US, led by Atlanta Hartsfield-Jackson, which also resumed its #1 berth, taking over from Guangzhou Baiyun International which had ranked #1 in 2020, then slipping to eighth place in 2021.

Passenger numbers tumbled in Asia Pacific, where events in China continue to dictate

In the international airport domain there have been casualties among numerous previously well-used airports, and especially so in Asia Pacific, where the impact of the pandemic is still felt, and more so than in Europe and North America.

In 2019 Hong Kong International was the world’s fourth busiest airport as measured by international passengers (71.2 million) and the 13th busiest overall.

Currently Hong Kong International is in 84th position, with only 12% of comparable capacity being operated.

HKG’s plight was highlighted in the Hong Kong aviation traffic increases in early 2022, but there’s a long recovery in prospect analysis in Mar-2002.

There is a similar story at Seoul’s Incheon International Airport, which was the fifth busiest international airport in 2019, just behind Hong Kong, on 70.6 million passengers.

Both the Hong Kong and Incheon airports are dependent on Chinese traffic, including transfer traffic, and their position is unlikely to improve unless and until large cities in China reopen fully for business.

While it is not clear why London Heathrow has made this recovery now, it is highly likely that it is connected to the reestablishment of tourism in the UK capital since the government there began to relax travel restrictions in Feb-2022, removing them almost entirely in Apr-2022.

The city has positioned itself again as the European capital and de facto global focal point for both leisure and commercial airline travel, with its attraction enhanced by the globally televised Platinum Jubilee celebrations for Queen Elizabeth. Further, travel within the city-region has been enhanced by the opening of the three-year delayed Crossrail (Elizabeth Line) which runs to Heathrow Terminal 4 (which will reopen on 14-Jun-2022).

Gatwick Airport has also benefitted from this renewed interest in the UK recently, managing to attain eighth place in the ACI list for passenger numbers and ensuring that London has the accolade of being the world's most visited city presently (and that is without taking into account London’s other airports, Stansted, Luton, City and Southend).

At the same time, depending on which measure is used, the UK’s regional airports in big city conurbations are doing even better.

Although Heathrow (and Gatwick) lost as much capacity - in some cases even more - than did the regional airports during the height of the pandemic, Heathrow was initially quicker to recoup those losses as long haul airline routes were reintroduced in London, but not necessarily to the same degree as in the regions.

Equilibrium has now been restored as the table below makes clear: all three regional airports are ahead of both Heathrow and Gatwick airports.

That will be good news for a UK government whose fortunes hinge on the votes it gets in the next general election - from the English regions in particular; the government having promised to improve their economic fortunes as a major campaigning plank of the last (Dec-2019) election.

Amsterdam Schiphol and Paris are now vying for second place for capacity in Europe, reflecting the slower exit from travel restrictions in those countries than the UK, although the capacity recovery has speeded up in the last few weeks.

The major hubs of Dubai and Doha vary considerably in international capacity at present.

In the week commencing 06-Jun-2022 Dubai is only at 66% of 2019 capacity but its recovery line has fluctuated in recent weeks, whereas Doha’s line is consistent and that airport is now at 93.7% of 2019 capacity.

Reflecting on the European figures, Oliver Jankovic, Director General of ACI Europe, spoke in terms of a full recovery to pre-pandemic volumes now being expected in 2024 rather than 2025 - although he did not specify whether that was in Europe or globally.

There are numerous ways of interpreting that statement.

It would appear to be based solely on current recovery rates from a virus that has not been extinguished, and which could yet return in a more serious form in the coming winter, and the statement also appears not to take into account the implications of extended conflict in Europe, nor of economic recession.

And Mr Jankovic was quick to point out that the recovery is founded on a disproportionate increase in leisure travel influenced by high degrees of LCC capacity, which will not necessarily equate to actual flights flown (see below), as well as being most susceptible to the factors listed above.

In other words, the evident recovery could be short-lived.

But positive statements about recovery might stir governments and the industry into action.

That is an improvement, but hardly qualifies as something to celebrate.

On the other hand, a positive statement on the lessening of the anticipated recovery period, when made by a senior figure in the industry, is welcome news.

There are many reasons being advocated by the government in the UK and the air transport industry for the current spate of mass flight cancellations and snail-like progress through airports and at baggage carousels, which have included overbooking by airlines when they know they have insufficient capacity, pilots and cabin crew; too many airport staff having been fired when they were protected by government financial support; and the government removing restrictions too quickly.

Yet one reason has not been aired.

And that is the fact that the industry was conditioned by 'experts' almost from day 1 of a global pandemic to accept that it would not end for five years (and that period was even increased to six by some commentators).

Consequently, a mindset that traffic levels could not recover appreciably until 2025 at the earliest was put in place and that became immovable. Only Qatar Airways' CEO Akbar al Baker was consistently prepared to predict a recovery as early as 2022.

Hopefully, some more in the way of a positive outlook from industry leaders will help loosen and shift that mindset. 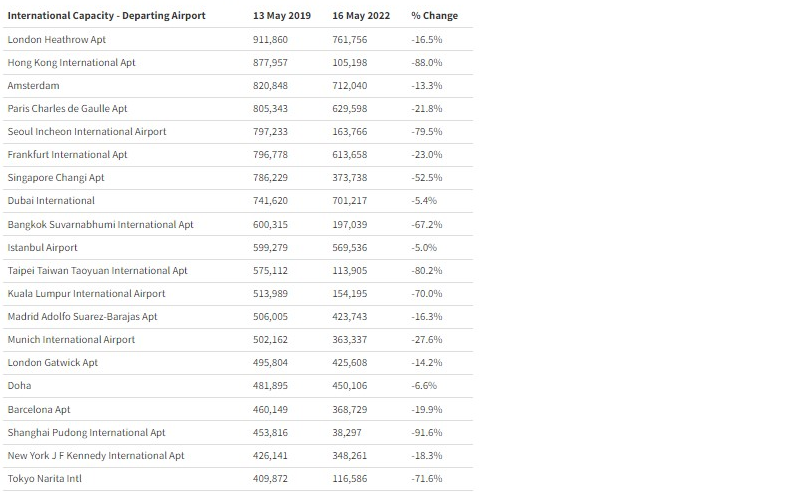