Two years after the coronavirus pandemic was called by the WHO, some countries now treat it – rightly or wrongly – as no more than a minor inconvenience.

Not so in certain parts of Asia Pacific, including the outlier China, which is once again locking down its citizens in Shanghai.

The ‘Special Administrative Region’ next door, Hong Kong, is undergoing its own crisis too; its fifth wave nonetheless, one that is infecting more people than ever before, and to world record proportions.

Even so, passenger traffic increased strongly in Hong Kong in Feb-2022 and there are hopes that this recovery can be sustained, perhaps by reducing the stiff measures imposed on visitors.

Whether or not that happens, Hong Kong needs to get a move-on with restoring its economy as best it can, because rivals like Singapore are well placed to take advantage of any lingering weaknesses.

Passenger volume increase of 80% recorded in Feb-2022, but movements and freight down

Airport Authority Hong Kong (AAHK) announced that Hong Kong International Airport (HKIA) had handled 86,000 passengers in Feb-2022, which is a year-on-year increase of 80.2%, but passenger volume continued to remain significantly lower than the pre-pandemic level recorded in 2019.

Hong Kong has recorded 5,000 COVID-19 deaths and over one million cases among its population of 7.5 million.

Reported new cases are actually coming down as this is written: from a high of more than 75,000 a day at the beginning of Mar-2021 to 14,000 on 20-Mar-2022; but as the chart below shows, there has been a distinct spike since mid-Feb-2022, the fifth wave and the worst outbreak the ‘Special Administrative Region’ has suffered. 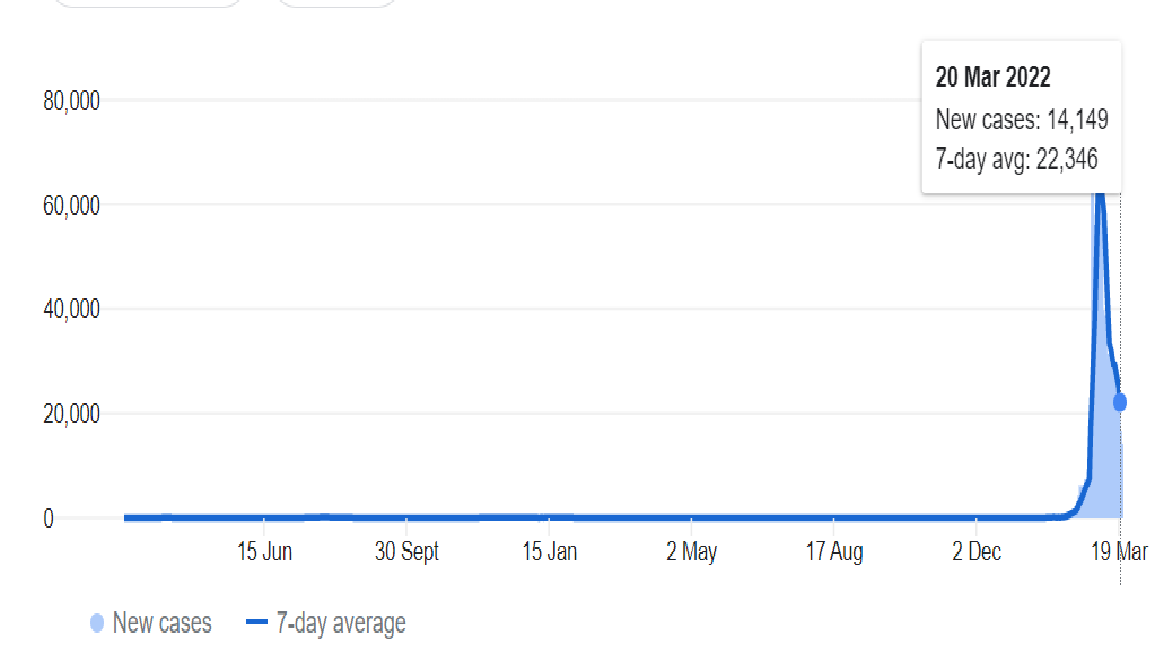 This infection rate has outpaced other cities around the world. At its height there were almost 900 confirmed infections per 100,000 Hong Kong citizens in early Mar-2022 and the daily death toll, over 200, was as high as the total number before this outbreak.

The all-time high for the coronavirus pandemic was previously held in Jan-2022 by New York City, with 500 cases per 100,000 residents.

One factor behind this high rate is the high density of population within crowded apartment blocks, a common factor elsewhere of course, but Hong Kong is the fourth most densely populated country or territory in the world.

The infection rate has prompted the healthcare system to crumple under its weight, with the “elderly and unvaccinated” most badly affected, according to local reports. Another factor may be alleged inefficiencies of one of the two vaccines in use.

Mirrors the position with China and it won’t encourage travel between the two, even though traffic was up in Feb-2022

There is bound to be a spin-off effect in China, itself suffering from its own Omicron outbreaks, which have ‘locked down’ 30 million of its citizens.

China is obsessed with achieving a Zero-COVID count on a city-by-city basis, which it actually did in 2021 for a while. Accordingly, it is unlikely to encourage travel from Hong Kong once the significance of the Hong Kong outbreak becomes clear – to put it mildly.

So far, the SAR has not been adversely affected by mainland Chinese concerns. Departure passengers from the Chek Lap Kok airport to mainland China and Southeast Asia experienced the most significant increases during Feb-2022, but transfer/transit passenger volume did underperform owing to the tightened restrictions. 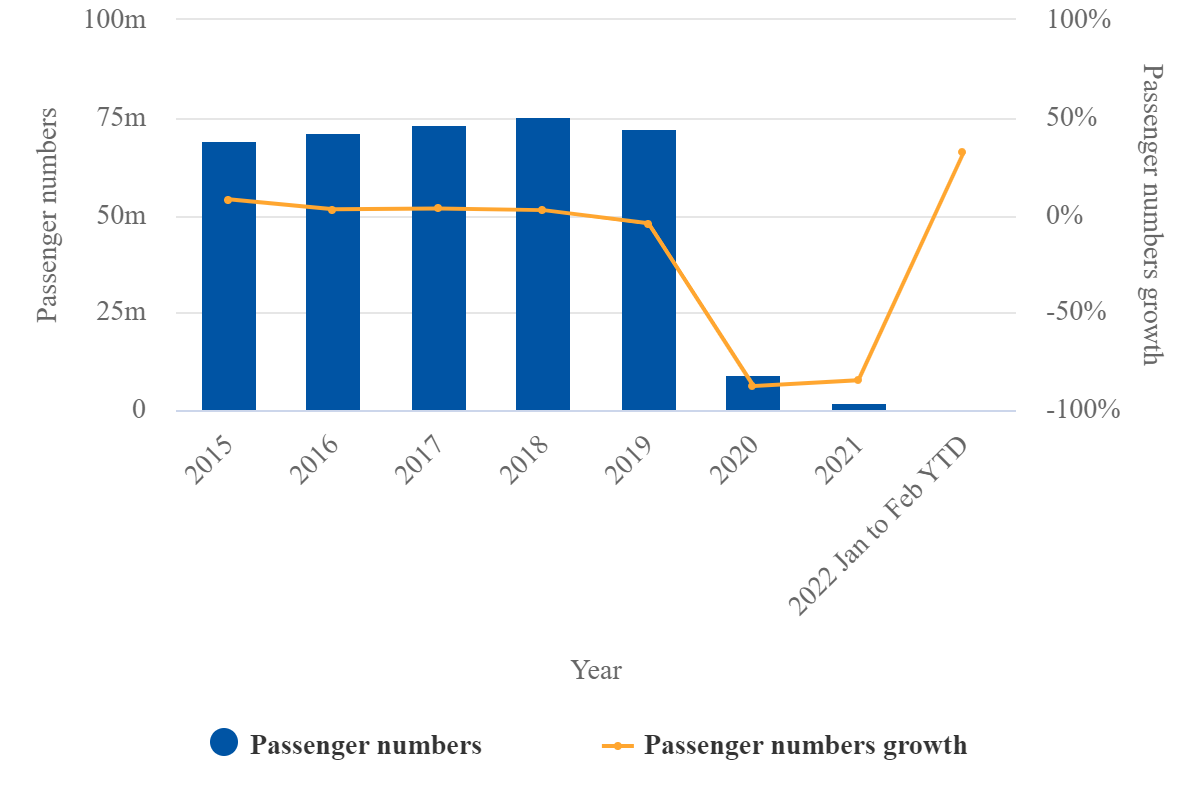 So the big gain in Jan-2022 and Feb-2022 (collectively +32%, and the bigger share of the increase in February) should offer some solace at least.

Tourism arrivals on the up overall, but most markets are down

There was more good news from the Hong Kong Tourism Board, which reported an increase in tourism arrivals for Jan-2022 that amounted to a +61.7% gain year-on-year, even if it was only to a total of 7064.

In other words, the increase in tourism is being generated solely by China. How long can that last?

It is perhaps for those reasons that Hong Kong Chief Executive Carrie Lam said recently that there are strong grounds to shorten quarantine for overseas arrivals, and during the week of 21-Mar-2022 the government will announce the latest anti-epidemic measures to last until 20-Apr-2022.

Ms Lam said that the government would make sure the controls will be a balance of public health and the economy and citizens' level of tolerance. Hong Kong currently bans arrivals from nine countries, including Australia, Canada, France, India, Pakistan, the Philippines, the UK, and the US, effective until 20-Apr-2022.

It’s as if Ms Lam was saying, ‘We have so much infection here anyway that allowing foreigners (presumably who are vaccinated) in and letting them mix sooner won’t really make that much difference’.

Many European countries chose that option in Jan-2022. Most have ‘got away with it’, so far, but in some cases only marginally so.

And the chart of seat capacity, below, does seem to suggest that.

During 2020 (the beginning of April) and 2021 there was a worrying uniformity of seat capacity, or more accurately – the lack of it. The capacity ‘flatline’ extended throughout both those years and into Jan-2022 and Feb-2022, but has finally begun to rise, albeit very slowly, and despite the continued onslaught of the pandemic in Hong Kong.

In fact, with 184,000 seats on offer in the week commencing 28-Mar-2022 that is the highest total for exactly two years, to the precise week. 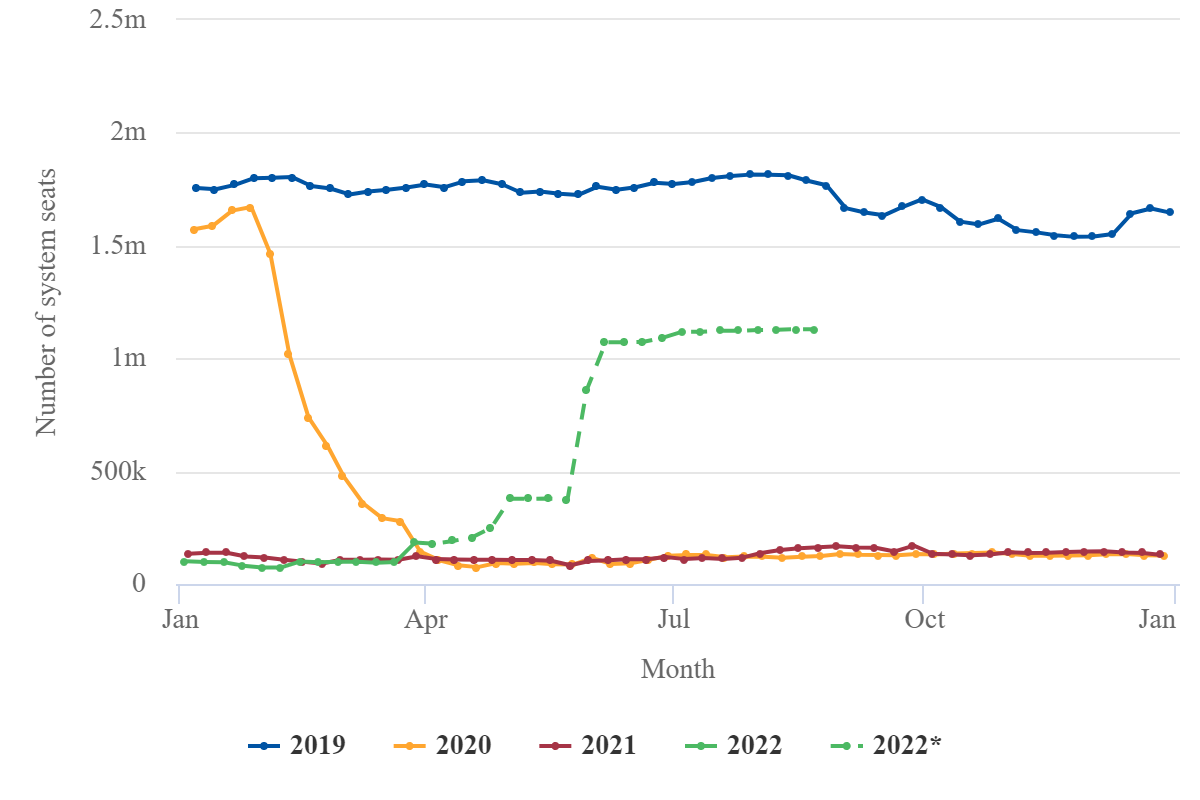 Of course, there is still plenty of the year left in which that could change in either direction.

Cathay Pacific still the largest airline, despite its problems…

Despite its many problems, Cathay Pacific is still the largest airline by seat capacity at Hong Kong, with 36.3%.

China Airlines is second, with 12.9%. Between them, Singapore Airlines and its low cost arm Scoot account for just less than 10%. 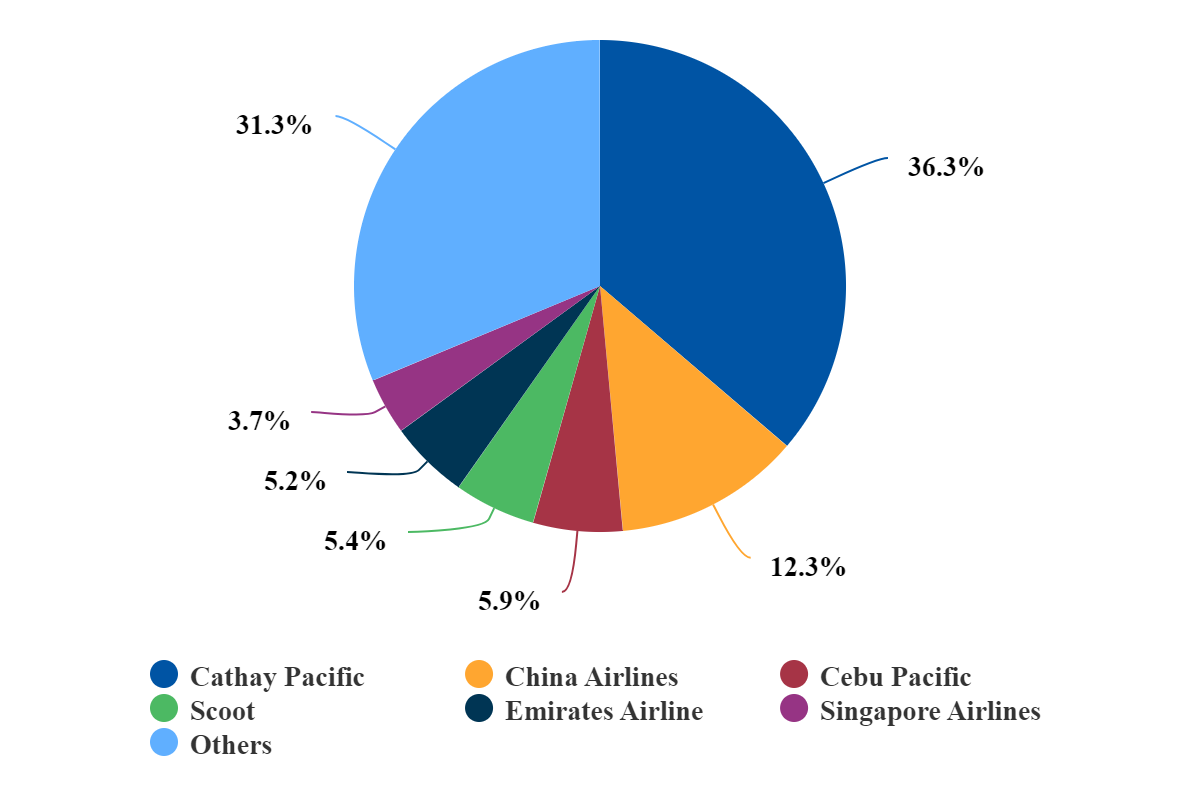 On account of restrictions either in Hong Kong or elsewhere, currently passenger capacity is available only to Asia (Northeast, Southeast and South) and the Middle East.

Almost 70% of capacity is on flights of four hours or less.

That does not compare well with Singapore, which vies with Hong Kong for the title of Asia Pacific’s leading financial centre, having already leapfrogged it in fifth position globally during the 2019 riots in Hong Kong.

Singapore is currently connected to nine continental regions – not four.

One benefit that Hong Kong retains is that although its seat capacity is still very low, it is well spread among the three main airline alliances, and two localised ones, with only 13% of seats ‘unaligned’, which is almost identical to the ratio at Singapore (week commencing 21-Mar-2022).

Utilisation of the airport, as measured by seat capacity during hourly blocks, varies considerably from day to day and can best be described as ‘patchy’.

The chart below is for Monday 21-Mar-2022, the lightest day for utilisation in the week commencing on that day. It reveals no utilisation at all for one third of the day – eight hours.

Hong Kong International Airport: whole system (there are no domestic) seats per hour for 21-Mar-2022 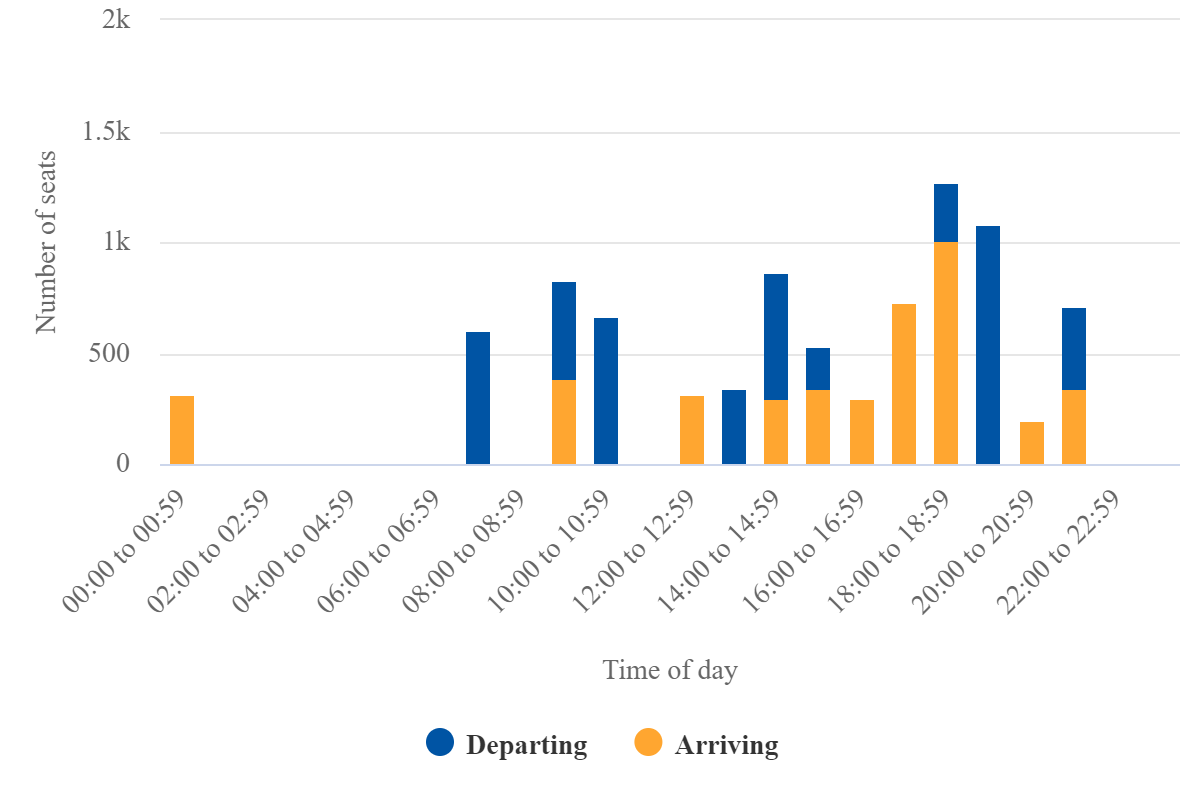 Again comparing Singapore, every hour block of every day in week commencing 21-Mar-2022 is occupied by arriving and/or departing aircraft.

Turning to cargo, throughput declined as a result of flight reductions following the emergence of the Omicron variant of COVID-19.

Exports and transhipments were affected most significantly, declining by double digits compared to same month in 2021. Overall cargo to and from North America experienced the most significant decrease during the month of Feb-2022.

That said, capacity is once again showing signs of increasing in Mar-2022 and Apr-2022. It is especially important for Hong Kong that it regains lost ground in cargo, having been the world’s busiest cargo airport in 2019 and second in 2020 to Memphis, which mainly handles parcels. 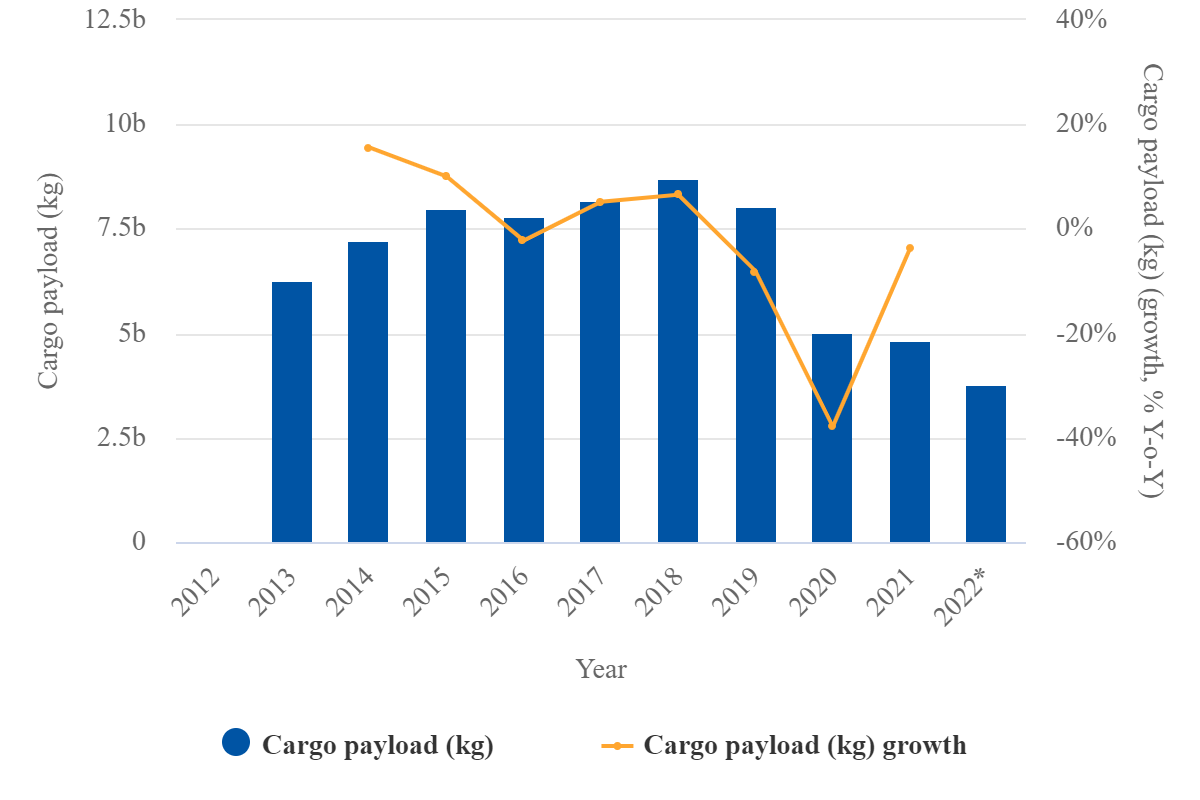 Hong Kong’s airport has languished in the plague wilderness for too long and is at a tipping point.

With coronavirus cases rising it is a bold decision to relax entry rules, but it may be the only way to sustain any sort of recovery this year as mainland China once again slams down the shutters.