The Japanese airport privatisation programme initiated by the Infrastructure, Transport and Tourism Ministry over a decade ago was progressing nicely until the coronavirus pandemic, which slowed it down without stopping it entirely.

Now it looks set to pick up speed again with the Niigata Prefecture aiming to make a final decision on whether or not to proceed in Nov-2022. The likelihood is that it will, because the programme can be judged to have been a success so far and because Niigata, while being only Japan’s 24th largest city, is underserved by air transport.

What is of equal interest is whether or not MLIT’s critical twin aims of increasing the number of LCCs and of their passengers, and increasing tourism, can be achieved at Niigata.

In the first case it can, but greater tourist numbers won’t flow automatically from a privatisation.

Niigata Airport privatisation decision to be reached by Nov-2022

The Niigata Prefecture in Japan has established a council to review a proposal to privatise Niigata Airport. The prefectural government will reach a conclusion on whether it will privatise the airport by Nov-2022.

Niigata is a port city on Honshu, Japan’s main island.

It is the capital and the most populous city of Niigata Prefecture, in the Chūbu region, and it is the largest second largest city in the Chūbu region after Nagoya. The city has an estimated population of approximately 800,000. It is a free port.

One of a number of smaller airports to be concessioned, or heading that way

Niigata is the latest in a string of smaller airports coming up for privatisation by concession under the auspices of the Ministry of Land, Infrastructure, Transport and Tourism (MLIT), which is one of the few government departments anywhere in the world which effectively marries the diverse demands of infrastructure, transport and tourism under one roof.

The department has done a sterling job in privatising a number of airports since it began the task in 2011, before which there were few examples, although it has fallen short of its initial ambition to privatise “all national airports by 2020.”

There are 19 airports so designated.

Japan’s airports are divided into:

Categories 3 and 4 are not currently targeted for privatisation. 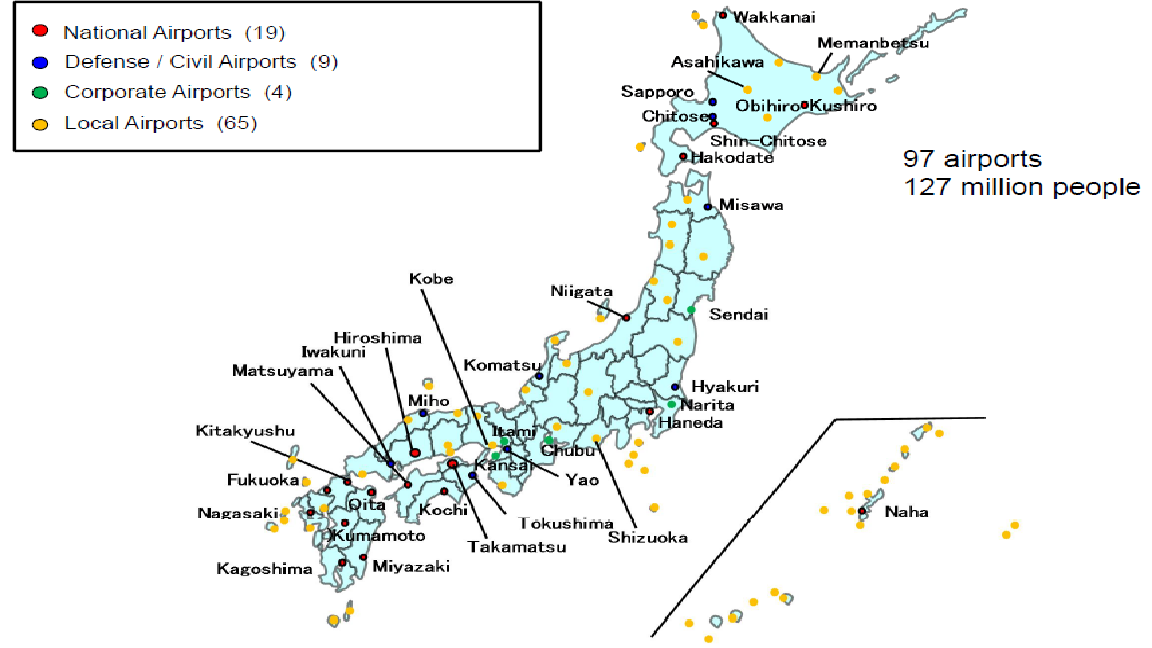 Large, medium and small airports have all been concessioned out, attracting local and foreign investors

Those airports that have been privatised include large city ones like those in and close to Osaka (Kansai, Itami and Kobe); also Sendai (the first privatisation) which is 100km from Niigata; mid-sized city airports such as Fukuoka and Hiroshima; also smaller ones such as the seven Hokkaido Island airports, which were concessioned in a package; Kumamoto Airport and Shizuoka Mount Fuji Airport.

More are waiting in the wings. The pandemic affected the privatisation schedule but not unduly, and delays (for example Hiroshima) were measured in months.

The process has brought an eclectic mix of investors to the sector in Japan, including international heavyweights such as VINCI Airports (the Kansai airports at Osaka, which it operates in conjunction with the Japanese company Orix) and a very wide range of Japanese financial institutions, keiretsu (industrial conglomerates) and national/local transport and infrastructure companies, which brought their own particular expertise to the table. It is probably the most diversified range of investors in the world.

The reasons why MLIT opted to follow a privatisation path after many years in which they eschewed it have been chronicled previously but are worth repeating.

They boil down to:

Japan’s incoming tourism is growing, but it remains well behind equivalent countries in Asia Pacific and Europe

In the first instance, Japan was the third most visited country in Asia Pacific by foreign tourists in 2019 after China and Thailand but does not figure highly in the world rankings, being just outside the Top 10.

However, it was the seventh largest generator of international tourism receipts, at USD46.1 billion (+8% over 2018). In other words – tourists spend more money in Japan than they do in many other countries, so there is every incentive to enhance that expenditure further.

In the second instance, it is often the case that a high number of LCCs and their seat capacity at any airport equates to a greater generation of tourism, and that private sector airport operators tend to chase LCCs harder than do municipal operators, who are sometimes more concerned with ‘image’ than with the bottom line.

Accordingly, a virtuous circle is formed – privatisation by a concession method that rewards both parties based on results > LCC growth > tourism growth > profits.

There has been a consequential increase in low cost airports and terminals (LCATs), including a terminal at the (privatised) Osaka Kansai Airport, one at the (corporatised but not scheduled for privatisation) Centrair Chubu Airport at Nagoya, and one at Okinawa Naha Airport (a privatisation target).

Ibaraki Airport, in the Tokyo Metropolitan area and about 80 km (50 miles) northeast of Tokyo, close to the city of Omitami, was converted from a military base in Nov-2010. It was designed specifically to be a low cost airport (LCA).

The increase in LCCs and LCATs actually predated the privatisation drive

This is not a wholly recent phenomenon.

When Kitakyushu Airport opened in 2006 this offshore airport set out its stall to attract LCCs with 24-hour operation, and indeed, it did attract Korea’s Jeju Air, a budget airline, from 2008.

There is realistic potential to attract more LCCs to Niigata...

So the question must be: how would Niigata fall into the MLIT ‘regime’ of low cost carrier growth and accompanying tourism?

Before the coronavirus pandemic Niigata had experienced quite strong passenger traffic growth in 2018 (+10.5%) and 2019 (+6.9%); much better than in the preceding years. 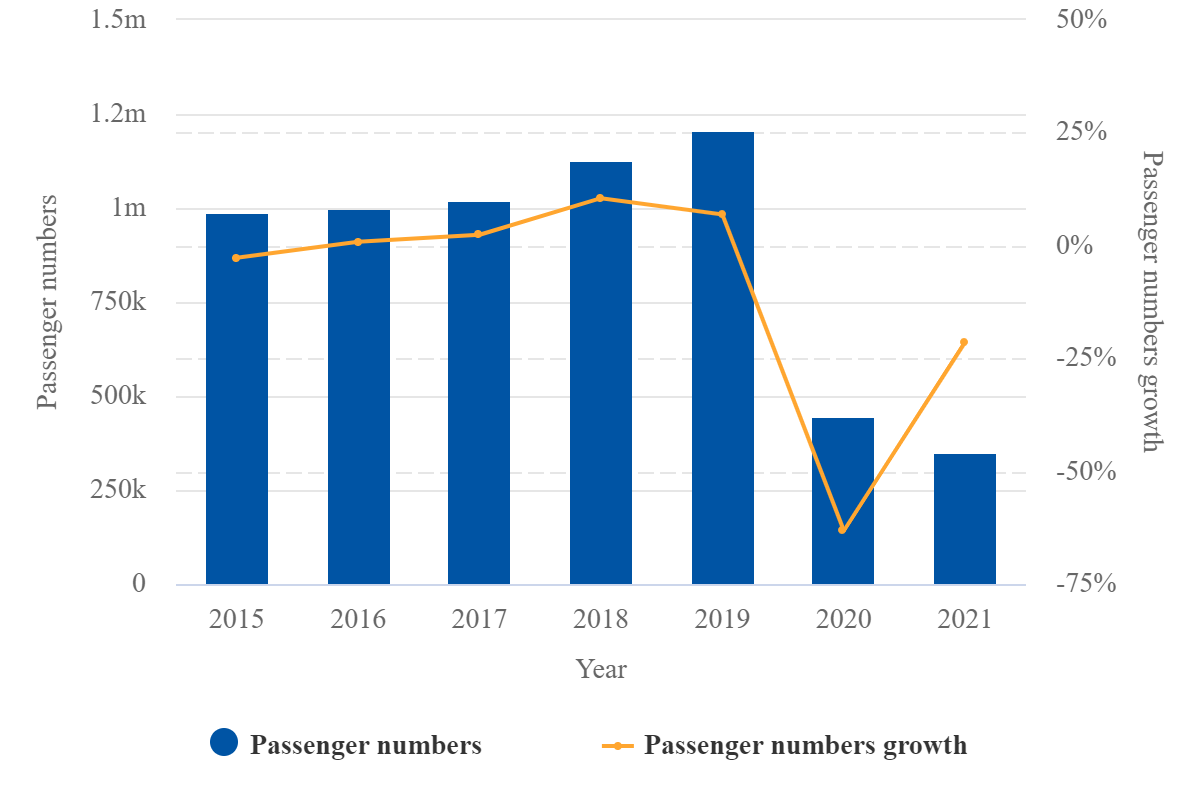 That growth did not really emanate from the budget sector.

Presently (week commencing 07-Feb-2022), LCCs account for only 11.5% of all seats, which are also all domestic seats.

That is less than half of the ratio for domestic seats in Japan as a whole in 2021. 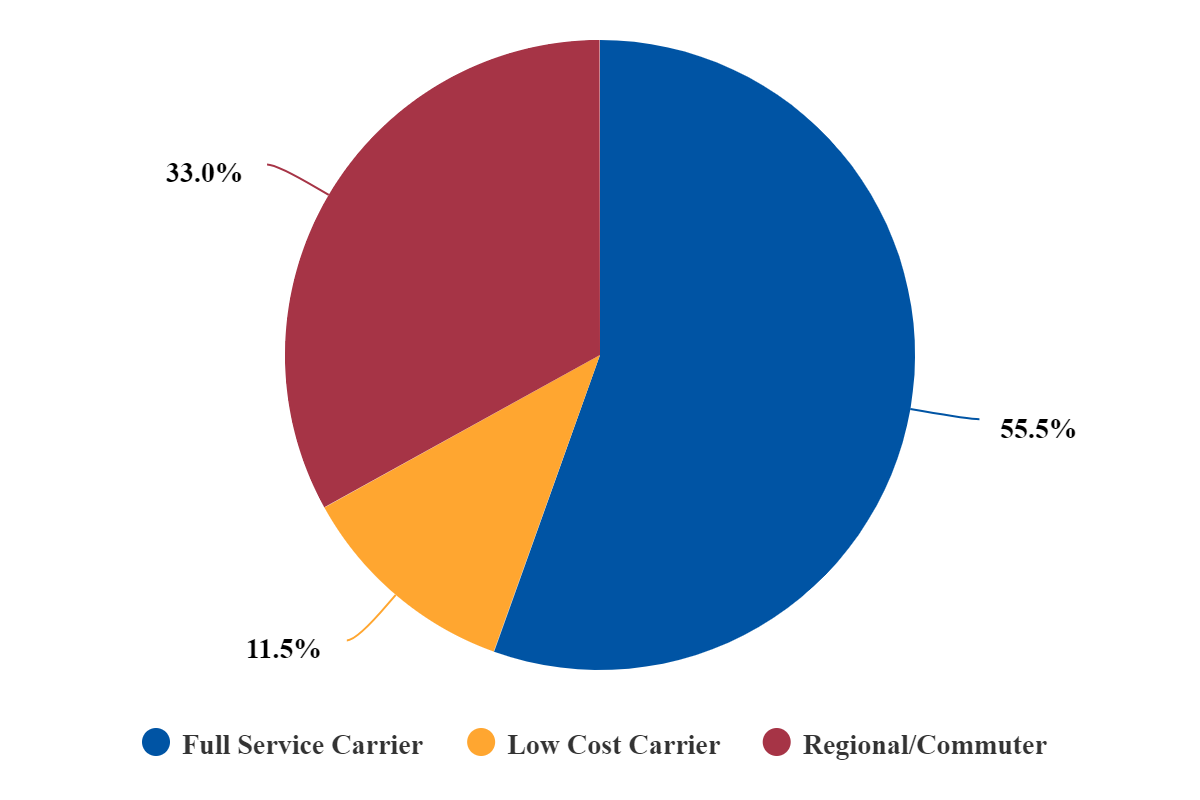 It is also less than half of the LCC seat ratio (26.2%) at Sendai Airport, which was the first to be concessioned.

Another way of looking at it is that the LCC seat ratio was even less at Niigata, at 6.1%, when CAPA last examined the airport in May-2021.

So there has been progress. To what degree that has been dictated by the pandemic, which afflicted Japan badly and still does by most standards, is yet to be determined.

...but it isn’t a tourist attraction

It is a substantial city economically, its GDP driven by the agricultural sector. Rice is the principal product – and among the prefectures of Japan Niigata is second only to Hokkaidō in rice output – and another popular product is flowers. In the manufacturing sector Niigata is the metal production equivalent of Pittsburgh in the US, Hamilton in Canada, Sheffield in the UK, and Essen in Germany.

There is little of touristic interest, apart from ‘alpine’ skiing, a trip to the offshore Sado Island, and visiting the traditional 'onsen', or hot springs, which in any case are located around the country.

So part of MLIT’s requirement is met – the potential to build on slowly but steadily increasing LCC operations, whereas the tourism one is unlikely to be.

The big difference is that it is the prefecture pushing the agenda, rather than MLIT

The difference here, though, is that it is the local prefecture that is driving the agenda as much as MLIT. It has observed the positive impact of these concessions on airports across Japan, although waiting until later in the year, when hopefully the pandemic has abated, before making a decision to proceed.

More prefectures are likely to follow in its path.

For its part, MLIT hopes that with the inbound tourism market starting to grow before the pandemic and the LCC market steadily taking hold in Japan, both local and foreign investors will look again at its privatisation agenda as an exciting opportunity this year.

At the same time, it has admitted that it still has some way to go to convince the Japanese community – especially those in rural cities with entrenched attitudes where some of the airports are located – of the value bringing in experienced global operators/investors.

In Niigata’s case at least, those investors are more likely to come from within the Japanese industrial and financial community rather than from abroad.

It is as likely that local companies will join consortiums, hoping to bring their particular expertise to the table and to reap the rewards accordingly.