New Zealand has negotiated 12 bilateral agreements in the past 18 months as the government moves to implement its new International Air Transport Policy announced in Aug-2012. This places emphasis on establishing open skies agreements with key markets even if the offer is not reciprocated. To that end the government has negotiated the new or expanded bilateral agreements with the United Arab Emirates, Qatar, Kuwait, China, Taiwan, Japan, Indonesia, Brazil, Paraguay, Uruguay, French Polynesia and Iceland.

Negotiations have also been held recently with Papua New Guinea while talks with Vietnam and Thailand are planned in the near future.

New Zealand Ministry of Transport GM of Aviation and Maritime, Bruce Johnson said at the CAPA Australia Pacific Aviation Summit in Sydney on 07-Aug-2013 that the policy has a large focus on capacity and a strong commitment to open skies agreements where possible. “But [the policy] has also gone further than that and said where open skies can’t be agreed then we will agree to whatever is good for New Zealand. And if that means we don’t get reciprocity, then so be it.”

New Zealand’s open skies agreements with the United Arab Emirates, Qatar and Kuwait are the cornerstone of a five-year NZ Inc Gulf Cooperation Council (GCC) strategy and “pave the way for more direct flights” to and from the Gulf region. The strategy, announced in Jun-2013, aims to grow New Zealand's relationship with the GCC based on closer collaboration between government agencies and the business community.

Emirates is the only Gulf carrier to operate to New Zealand and has done so for the past 10 years. But Emirates operates its daily services to Auckland and Christchurch as tags to its Dubai to Sydney, Melbourne and Brisbane flights. Emirates flies to Auckland from Sydney and Melbourne with A380s and from Brisbane with a 777-300ER. The daily Christchurch service from Brisbane is operated with a 777-300ER. All these services codeshare with Qantas as part of their extensive alliance.

Fellow United Arab Emirates carrier, Etihad does not cross the Tasman, but instead codeshares with Air New Zealand from Sydney to Auckland. 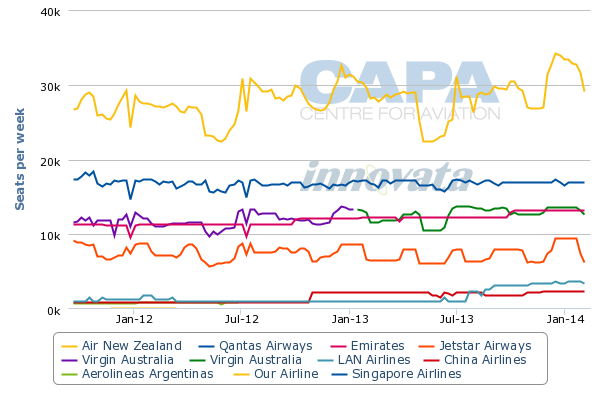 Qatar Airways is a likely Gulf competitor to Emirates on New Zealand routes, most likely via Australia

But Qatar seems likely to be interested in competing with Emirates under its open skies agreement with New Zealand which is yet to be approved by the New Zealand Cabinet, though this should be a formality.

Qatar approached New Zealand in 2012 with a view to negotiate a bilateral agreement. Qatar Airways would be most likely to launch services to New Zealand via Australia. The carrier operates daily from its Doha base to Perth with a mix of Boeing 777-200LR and -300ERs and to Melbourne with Boeing 777-200LR.

But Qatar Airways’ current schedules on both routes do not allow time for a trans-Tasman crossing. The Perth flight arrives at 17:55 and departs on its return journey to Doha at 23:00. The Melbourne flight arrives at 21:25 and departs again at 22:55. So schedule changes would be necessary to follow the Emirates model, requiring greater commitment of aircraft to the route.

The carrier could alternatively adopt a disruptive approach by becoming the first Gulf carrier to offer a one stop service from New Zealand to Europe via the Gulf. Qatar Airways operates an extensive network beyond Doha throughout Europe as well as a number of key African destinations.

The distance from Doha to Auckland is 7,850nm, nearly 1,400nm further than Doha to Melbourne, but the 777-200LR has the range to operate the sector with a full passenger payload according to Boeing's website. Based on flight times from Doha to Australia the journey would take about 18 hours from Auckland and about 17 hours to Auckland.

The Gulf region is important to New Zealand’ as an exporter of education services; it is the country's seventh largest education market and the GCC Strategy’s education initiatives are expected to increase study-related travel to New Zealand. In addition the strategy’s high value export initiatives should also increase demand for air freight capacity to the region.

However, Qatar Airways lacks the advantage of its Asian competitors being able to draw on a broader pool of feeder traffic in Asia which help to make one stop services via their hubs to and from New Zealand viable. The European market for New Zealand has also been in decline since the start of the global financial crisis and in the year to Jul-2013 fell by another 8.7% to 408,000. In contrast Asia as a whole grew 9.7% to 543,000.

Open skies with Brazil clears the way for one stop services

An open skies agreement between New Zealand and Brazil announced in Mar-2013 removes previous route restrictions and the number of flights that could be provided between and beyond the two countries.

While Brazil’s two key destinations, Rio de Janeiro and Sao Paulo are out of reach for direct flights from New Zealand, even with next generation 787 and A350, the new agreement will allow cooperation between merger partners LAN Airlines and TAM Airlines to serve Brazil via Chile. Brazil is a surprisingly large market for New Zealand, accounting for about 10,000 inbound visitors annually and more than 3,000 Brazilians study in New Zealand.

LAN currently operates four times weekly according to its online schedules as part of its service between Santiago and Sydney.

Similar open skies agreements have also been reached with Paraguay and Uruguay, neither of which is currently served directly from New Zealand.

China is a key growth market for New Zealand tourism, but the expansion of a bilateral agreement in Apr-2012 that tripled capacity allocations to 42 return flights per week, divided equally between the two countries, has so far had little uptake.

Currently Air New Zealand and China Southern operate daily frequencies between Auckland and Shanghai and Guangzhou respectively. China Southern will increase capacity in Dec-2013 with the addition of three weekly services and becomes the first airline to operate the Boeing 787-8 to New Zealand, replacing its existing A330-200 service. The change increases China Southern’s total capacity to 2,280 seats from 1,708 seats in Aug-2013.

Air New Zealand has found it difficult to build demand on its China services while also contending with increased competition from China Southern, forcing the carrier to consolidate its Beijing service to Shanghai in 2012. In Nov-2012 Air New Zealand entered into a codeshare alliance with Cathay Pacific combining their Auckland to Hong Kong operations and providing Air New Zealand with network access to mainland China and India.

The rapidly growing Chinese travel market is expected to become New Zealand’s second largest visitor source market by the end of the decade, behind Australia. Chinese visitors to New Zealand grew 27% in the year to Jul-2013 to nearly 225,800 and Auckland International Airport forecasts that number to grow to about 575,000 per year by 2020, as an increasing number of middle class Chinese tourists look to travel beyond Asia.

In addition the Chinese market is expected to become increasingly valuable to the tourism industry with the number of high net worth individuals forecast to grow by 130% in the next decade.

At the time of announcing the expanded Chinese bilateral the New Zealand Government expressed a desire for China Southern to launch services to Christchurch, New Zealand’s only other gateway able to accommodate long-haul widebody services. Christchurch has a daily direct link to Asia operated by Singapore Airlines to Changi. 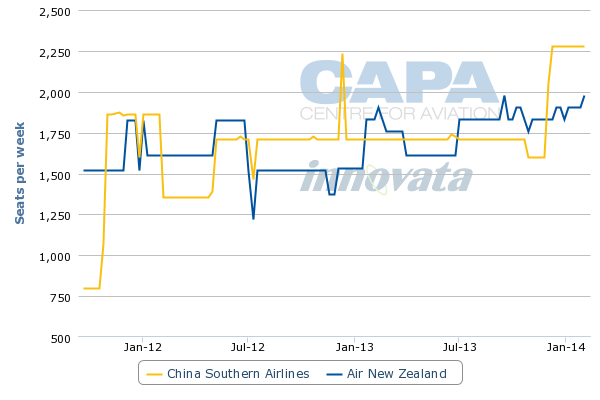 In addition to the capacity increase, New Zealand and Chinese carriers are permitted to fly to three more third-country airports en-route between New Zealand and China and beyond with full rights. The third countries are not specified in the agreement, but are to be nominated by the designating state. About 30% of Chinese visitors to New Zealand are dual destinational, via Australia.

Officials from both countries will meet again in 2014 to discuss opportunities to further liberalise air services arrangements, including capacity constraints at some Chinese airports.

The skies between New Zealand and Japan are open, with the exception of some limits on additional flights to the congested Tokyo airports. Access to Tokyo Haneda Airport and for fifth freedom services through Tokyo Narita Airport is limited to daily frequencies due to a lack of slot availability. In the case of Haneda access under the agreement is limited to night time slots.

Air New Zealand operates up to daily services to Narita with a range of equipment. But the difficult Auckland-Osaka service, which operates up to three times weekly will be suspended indefinitely from 01-Oct-2013. 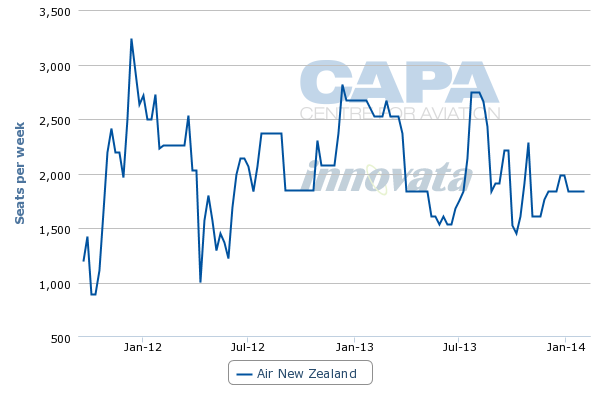 Visitor numbers from Japan grew by 8% to about 74,200 in the year Jul-2013, but the market had suffered a steep decline between 2004 and 2011 from about 170,000 visitors per year. Air New Zealand plans to increase its successful summer charter programme to regional centres in eastern and western Japan to help drive demand from the important market.

Indonesia will receive a large phased increase in capacity

Under a new arrangement recently agreed with Indonesia, this fast growing market will receive a large phased capacity increase. Details of the capacity increase or over what period it will be implemented have not been made public.

Currently Air New Zealand has an allocation for 550 seats per week on the route which it uses to provide seasonal services to Denpasar aimed at New Zealanders looking to escape the winter for a Bali beach. Garuda Indonesia has rights to operate 900 seats per week between Indonesia and New Zealand, but does not currently operate on the route. The carrier signed an MoU with Auckland International Airport in Apr-2012 to resume direct flights from Jakarta once market conditions improved.

The number of Indonesian visitor arrivals to New Zealand grew by 6% in the Jul-2013 year to about 12,500, but with a population of 240 million and a growing middle class, it is a market with enormous potential.

This is a clear example of trade benefits being maximised; Air New Zealand remains under majority government ownership. following the carrier's renationalisation after the collapse of its 100%-owned subsidiary Ansett Airlines in 2001. The flag carrier has navigated very effectively through often adverse economic conditions since then, recently reporting a strong profit. It is unlikely to be able to take up many of the rights made available under the new open skies agreements, but its government owner is well set on a course of using the airline as only one part of a wider aviation strategy designed to stimulate as much air service as possible.

That said, it will take time for the newly negotiated capacity to be taken up. Meanwhile, New Zealand will need to compete with rival destinations that are in most cases geographically better placed.