Mexican low cost airlines Volaris and Interjet are engaged in a significant transborder push in 2016. Combined, the airlines will launch a dozen routes to the US as an upcoming new bilateral lifts restrictions on the number of airlines operating routes between the US and Mexico. With many countries in Latin and Central America experiencing economic weakness, the US is a safer bet for expansion in the near term.

Volaris and Interjet target different passenger segments, and the airlines have little overlap on the new flights that they are launching to the US. Volaris cites numerous route opportunities in the US transborder market, and has grown rapidly in that space during the past several years. Interjet has grown more slowly but has quickly broadened its US reach in 2016, entering some markets that already have ample service.

Although US airlines still dominate the transborder market Mexican airlines are working to chip away at the sizeable gap between them, growing their international passenger numbers 10% year-on-year for the first five months of 2016.

(This is Part 1 of two reports examining the Mexico-US transborder market. Part 2 will focus on the proposed joint venture between Aeromexico and Delta).

Volaris plans to grow system capacity 17% to 19% in 2016, with the bulk targeted to international markets, and mostly to the US. 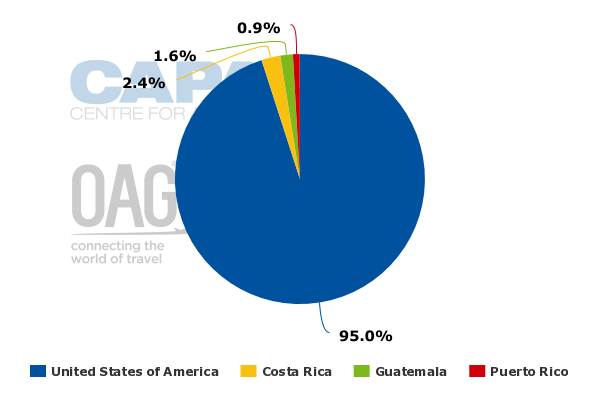 So far in 2016 Volaris has added flights from Guadalajara to Seattle and San Francisco, Monterrey to Dallas and Chicago O’Hare, Durango to Los Angeles and Culiacán to Phoenix. On three of those routes, Volaris is uncontested.

It will also face no competitors on new flights from Guadalajara to Austin that are set to launch in Aug-2016.

Competitors and seat share on Volaris transborder routes launched in 2016

Volaris’ transborder strategy is to target the VFR (visiting friends and relatives) passenger segment on routes that have low levels of competition. There is an opportunity to serve more than 100 transborder routes, Volaris has estimated, in addition to the approximately 50 it currently operates. 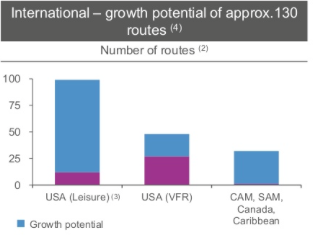 Executives at Volaris have concluded that its US transborder routes require more capacity, and those markets are performing well due to the resiliency of VFR traffic in a weak exchange rate environment – during 2Q2016 the MXP depreciated 18% against the USD.

Interjet turns its attention to the US in 2016, with several new route launches

Interjet’s new transborder routes launched in 2016 include Cancun and Guadalajara to Los Angeles and Mexico city to Dallas and Orlando Sanford International. It has outlined plans to introduce new flights from Cancun to New York in Sep-2016. Data from CAPA and OAG show Aeromexico, American, Dynamic Airways and jetBlue operate service from New York JFK to Cancun. United and Volaris operate service from Newark to Cancun.

Volaris is Interjet’s competitor on flights to Las Vegas. No other airline serves Orlando Sanford, but Aeromexico, Volaris and jetBlue operate flights from Mexico City Juarez to Orlando International airport.

Competitors and seat share on Interjet transborder routes launched in 2016

Interjet’s US transborder growth has been slower than that of its rival Volaris, but it has taken the path of significant growth in the market during 2016. Its seats on offer between Mexico and the US have grown 44% year-on-year for the week of 18-Jul-2016.

Among Mexican airlines, Interjet had a 16% share of the 4.3 million international passengers travelling on those operators from Jan-2016 to May-2016. Volaris had a 25% share and Aeromexico captured a 58% share.

Although Interjet operates international routes to Latin America and the Caribbean, the US represents the airline’s largest country of international seat deployment.

It has capitalised on the loosening of restrictions on the number of airlines serving Mexico-US routes.

However, Interjet also faces higher levels of competition on many of its transborder routes, given that it targets the same type of passengers as do its rival Aeromexico and its US competitors. It may take time for its routes to spool up, considering the higher levels of competition and Interjet’s lack of brand awareness compared with other airlines. Still, the US cross border opportunity is one that Interjet can ill afford to ignore. 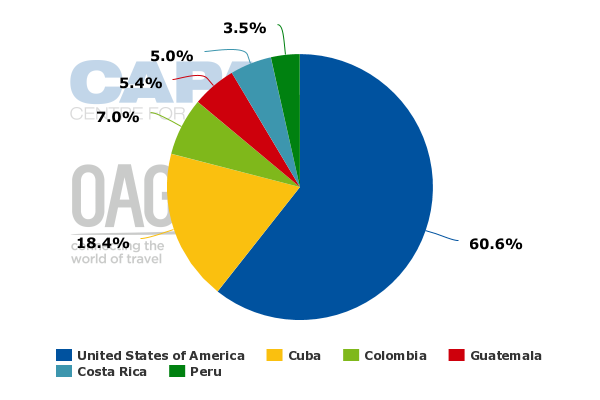 Mexico’s airlines could expand their transborder push further if VivaAerobus resumed international growth in 2017. The LCC made a short-lived transborder push in 2015. VivaAerobus completing a fleet renewal in 2016 and is likely crafting its strategy to re-enter the transborder market once the more liberalised Mexico-US biltaeral is finalised.

See related report: VivaAerobus pulls back on US routes as the Viva Group takes aim as Costa Rica

Real opportunities for the transborder market should materalise

Volaris and Interjet have made interesting moves in the transborder space during 2016. Volaris has stuck to its strategy of tapping some uncontested markets to stimulate VFR traffic while Interjet has entered more contested routes, competing with both fellow Mexican airlines and US airlines.

During the next few years the US-Mexico transborder opportunity created by the more liberalised bilateral should fully materialise for Mexico’s airlines. Volaris and Interjet are in the process of crafting their strategies, and VivaAerobus seems to be working to add new transborder flights within the next year.

Mexico’s more stable economy, the growth prospects for air travel for the country, and a more liberalised operating environment are coalescing to create inroads for Mexican airlines to tap the valuable transborder market.