A promising transborder push by VivaAerobus has become short lived, leaving the Mexican low cost carrier with only one US route. With the recent suspension of Cancun-Houston, six US routes that VivaAerobus launched over the last year have now been axed.

On most of the routes VivaAerobus faced formidable competition from both large US global network airlines and Mexican rivals Aeromexico, Interjet and Volaris. VivaAerobus’ international passenger numbers have grown at a steady clip in 2015, but its larger rivals Aeromexico and Volaris have also directed most capacity growth this year to international operations, particularly to the US.

VivaAerobus’ decision to end transborder routes occurs as the Viva Group is reportedly aiming to launch a third affiliate in Costa Rica by the end of 2015. Presently there is no coordination between VivaAerobus and the second airline created by the group VivaColombia, so it remains to be seen if the new airline will have any effect on VivaAerobus’ network strategy.

Among the four Mexican airlines serving US routes, VivaAerobus has been the most inconsistent. It first launched flights to Austin from Monterrey and Cancun in 2008, but pulled out a year later.

In a second foray into the transborder market in 2010 and 2011 VivaAerobus launched services from Monterrey to Chicago, Houston, Las Vegas, Miami and Orlando. All these routes were short lived except Monterrey-Houston, which the airline has been able to maintain since it was launched in 2010.

In a third attempt at transborder expansion, VivaAerobus launched in 2H2014 and 1H2015 services to Dallas from Guadalajara and Monterrey and to Houston from Cancun and Guadalajara. It also resumed during this timeframe flights from Monterrey to Las Vegas and San Antonio.

But all the routes launched in 2H2014 and 1H2015 have now been terminated. The last of these routes, a twice weekly service from Cancun to Houston, was suspended on 12-Oct-2015. Data from OAG and the VivaAerobus website show Monterrey-Houston as the only remaining international route for VivaAerobus with four weekly flights.

The expansion to the US was an ultimately unsuccessful attempt by VivaAerobus to narrow the gap with its larger competitors. VivaAerobus is by far the smallest player in Mexico's international market, accounting for only 2% of all international passengers carried by Mexican carriers in the first eight months of 2015 according to Mexican DGAC data.

VivaAerobus was the first of Mexico's new generation of LCCs to launch international services, beating both Interjet and Volaris. But VivaAerobus has repeatedly struggled to gain traction in the international market while its rivals have expanded rapidly.

VivaAerobus surpassed 20,000 monthly international passengers for the first time in Jun-2015 and Jul-2015. While this is a very small figure compared to its LCC rivals, it represented significant growth compared to prior years. 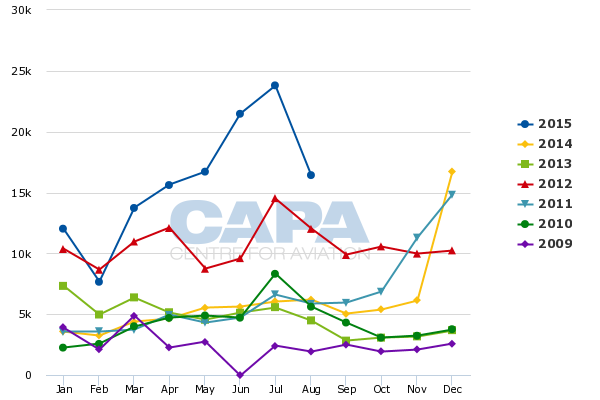 VivaAerobus faced a mix of competition on its transborder routes from its fellow Mexican rivals, large US network airlines and ULCC Spirit. On Monterrey-San Antonio and Monterrey-Las Vegas its competitors were Mexican airlines Aeromexico and Interjet. Its only competitor on the route between Monterrey and Dallas was American Airlines.

Shortly after VivaAerobus launched flights from Guadalajara to Dallas, its Mexican rival Volaris also entered the market. By Jul-2015 VivaAerobus and Volaris each held about a 17% seat share on the pairing with American accounting for the remaining 66%.

The same scenario played out on VivaAerobus’ service between Guadalajara and Houston, where VivaAerobus initially broke United Airlines’ monopoly status on the pairing. Shortly after Volaris launched service on the route. In Jul-2015 VivaAerobus and Volaris each had roughly a 13% seat share in the Guadalajara-Houston market while United accounted for the remaining 74%.

Although neither VivaAerobus nor Volaris made a huge capacity push into the transborder markets from Guadalajara, Volaris has the distinct advantage as Guadalajara’s largest airline measured by seats with a nearly 39% share. VivaAerobus is a distant fourth with just a 10% share of total seat capacity at Guadalajara, according to CAPA and OAG data. 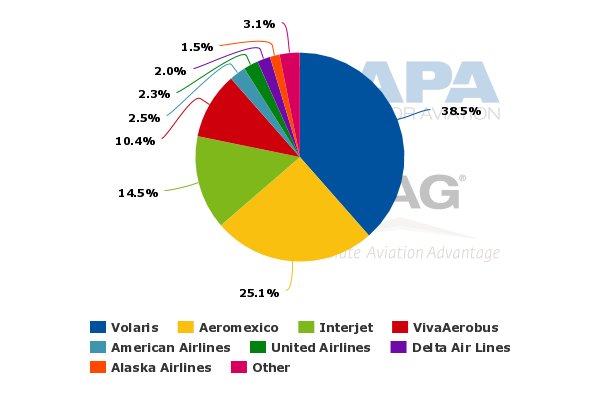 Guadalajara is a relatively small base for VivaAerobus with significantly less capacity than Monterrey or Mexico City. 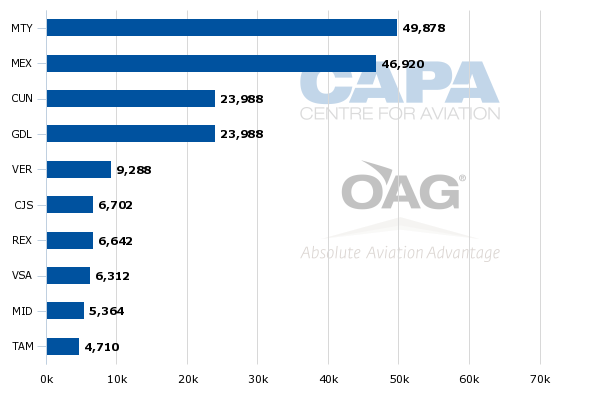 VivaAerobus is the second largest airline at its main base in Monterrey, behind only Aeromexico. Data from CAPA and OAG for the week of 12-Oct-2015 to 18-Oct-2015 show VivaAerobus has a 24% seat share at Monterrey compared with nearly 29% for Aeromexico (includes Aeromexico Connect). Interjet is a close third with about a 22% share. 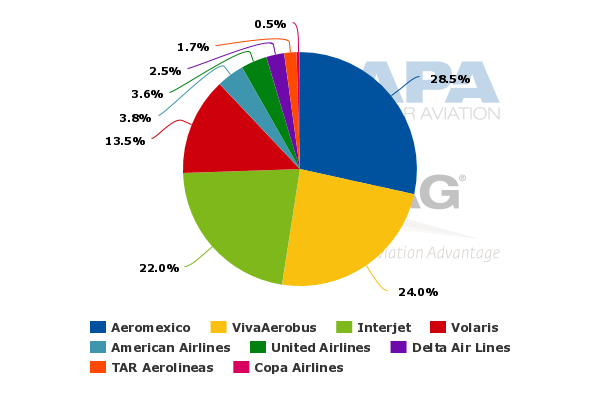 In the case of Monterrey-San Antonio, perhaps the route became too crowded with three Mexican airlines. VivaAerobus had less than a 25% seat share and was the last to enter the market, putting it in a difficult position.

Spirit Airlines introduced service from Houston to Cancun after VivaAerobus inaugurated flights on the pairing. Houston-Cancun was previously only served by United.

Spirit has served Cancun from other points in its US network for several years, and perhaps with its brand awareness in the US and ULCC structure, its entry into the market slowed VivaAerobus' ability to mature the route in a timely manner. Cancun is primarily an inbound market, a sector VivaAerobus and other Mexican LCCs have generally struggled to compete in against US carriers.

Was there too much competition among Mexican airlines in the US transborder market?

The two largest Mexican airlines offering flights between the US and Mexico, Aeromexico and Volaris, are growing their international capacity at a much faster clip than domestic supply during 2015. Although Aeromexico serves long haul intercontinental destinations including London, Paris, Madrid, Shanghai and Tokyo, the bulk of its international seats, nearly 60%, are deployed to North America.

For the first nine months of 2015 Aeromexico’s international capacity grew roughly 15% year-on-year compared with domestic expansion of roughly 6%. Its loads on international routes have been flat year-on-year at about around 81%, driven by international traffic growing in line with supply.

Data from the US DoT show that VivaAerobus’ load factor on US routes for the first three months of 2015 was roughly 52%. This is clearly unsustainable and likely was a factor in the decision to pull back its US operation. But the low load factor is also likely an indication that most of its US routes had been launched since 4Q2014 and were still in the spool up period.

Competition in the Mexico-US market has become extremely intense, particularly between Mexican carriers. The market has shown signs of overcapacity over the last year and market conditions are not likely to improve as the two largest Mexican carriers show no signs of slowing growth. It could be a sensible strategy for VivaAerobus to pursue opportunities elsewhere.

VivaAerobus’ has only operated international services to the US since launching in 2006. After VivaColombia’s launch in 2012, it seemed as if the two airlines would work together at some point, but a tie-up has yet to materialise.

In mid-2015 news outlet The Telegraph reported the Viva Group was planning to launch a third airline in Costa Rica by the end of 2015 with two Airbus A320s. Investors in the Viva Group include Mexican bus company IAMSA and Irelandia Aviation. Viva has had a team looking at potential new LCC opportunities in the Latin American market since launching VivaColombia over three years ago.

VivaAerobus in 2013 placed an order for 52 A320s which was intended to replace its original fleet of 19 Boeing 737-300s as well as support growth for both the Mexican LCC and sister carriers. The CAPA Fleet database shows that VivaAerobus currently operates 10 A320s along with 13 737-300s. The airline expects to complete its fleet transition to the A320 by early 2016.

The new Viva entity is dubbed VivaCam, and its president Joseph Mohan told The Telegraph that the airline would operate up to six A320s within three years. VivaCam has not yet identified a source for its aircraft but they will likely come from the VivaAerobus order.

Conditions in Mexico’s domestic markets are slowly improving, but the country’s two publicly traded airlines, Aeromexico and Volaris, have indicated that yields have some distance to climb before they rebound. VivaAerobus has almost certainly encountered the same yield weakness, likely resulting in low fares to sustain load factors.

Placing some of the group's A320s in Colombia and Cost Rica would be logical. Costa Rica has one of the more stable economies in the Americas. Its 2015 GDP growth is projected at 3.8% compared with 3% for Mexico.

There are also fewer competitors in the Costa Rican market with Copa and Avianca each accounting for roughly 23% of the country’s international seats, according to CAPA and OAG data. Avianca closed in 2013 its Costa Rican hub that it inherited from its 2009 merger with Central American airline group TACA, which included Costa Rican subsidiary LACSA.

The reduction in capacity by Avianca leaves a potential opening for a new Costa Rican carrier, particularly an LCC. But it remains to be seen if the establishment of a third airline will foster new cooperation among Viva affiliates.

VivaAerobus' aspirations seem unclear after the pull down of international flights

VivaAerobus could be entering a critical period after shelving a planned IPO and retracting expansion in the US transborder market.

VivaAerobus could be taking a step back, and evaluating its network options, possibly looking at new international routes to Central and South America. But at this point its future aspirations seem somewhat unclear even as the Viva Group starts spreading its wings.