Lufthansa Italia this month announced plans to launch frequent (up to daily) services from Milan’s Malpensa Airport to Catania (Sicily) and Prague from 01-Nov-2010, using A319s. These are not easy routes on which to win business with considerably more offered on the Catania route from Alitalia’s Air One subsidiary, Windjet and easyJet, and to Prague from CSA and easyJet. Less than two years after Lufthansa’s interest in taking over the ailing Alitalia fizzled out when Air France purchased a stake, prompting Lufthansa to set up its own new brand, Lufthansa Italia, at Milan, what are the prospects now for Lufthansa’s first new airline that it had set up in a foreign market?

At the time Lufthansa Italia was instigated, the fact that Alitalia had reduced its presence in the Milan market (Italy’s commercial capital) as a result of its financial difficulties was viewed by the German flag carrier as one of the best opportunities further to gain market share in Europe. Previously, it wanted its 100% Italian regional airline subsidiary Air Dolomiti to take on the task. As the Lufthansa Italia CEO, Heike Birlenbach stated at the time, “Milan is a strategic market: the population in the area reaches over 10 million and the city is one of the wealthiest in Italy as it is the financial and business capital of the country.” At the time Lufthansa was carrying some five million passengers a year from and to Italy, one of its largest markets in Europe after Germany.

Big money originating from business gives to the whole Lombardy region – with Milan as its capital - a powerful tool to influence economic decisions. With Italy’s embattled national carrier Alitalia consolidating its core activities in Rome, Milanese people felt increasingly frustrated. “There is an enormous potential for point-to-point destinations out of Milan, especially as the Milanese are very reluctant to transit today via Rome or Paris to reach the rest of the world,” added Ms Birlenbach.

Alitalia gave its support to Lufthansa to move into the market, as did the Lombardy regional government, which sees Lufthansa Italia as the unofficial new ‘home carrier’ for the region. Indeed, right from the start Lombardy has had ambitions to see further development and quickly asked Lufthansa to boost frequencies and routes.

The initial fleet was of six 138-seat A319s, quickly increasing to nine – one of them wet-leased from bmi - and airport facilities were improved by the airline. Non-stop flights were offered to eight European cities and three domestic ones (Bari, Naples and Rome), offering 180 frequencies per week with some 35,000 seats. The focus was on the needs of business travellers, especially punctuality, and average load factor of 60% was quickly achieved.

A sensitive point was how to sell a “German” airline to an Italian audience, which has a reputation for being somewhat fussy, if not nationalistic. Lufthansa attempted to solve the issue by adding Italian ‘flair.’ Specific uniforms were designed by an Italian company, and the airline added a new logo with Italian colours. Onboard, typical Italian dishes were served as it was recognised that Italian passengers’ tastes are different, even down to serving real espresso coffee on short haul flights. ‘Copy and paste’ was not considered an option; coffee and pasta was.

The airline first used German-based staff and aircraft registered in Germany, but immediately sought to gain an Italian AOC with the aim of hiring Italian staff. That was achieved in 2010, and helped position itself in the market in its own right as an Italian carrier, differentiating itself from the parent company. Even taking all these measure into account though, the airline was initially slow to gain respectability in the market, prompting LI to reconsider the message it was communicating to its target audience. Even now one could argue that not having a stand-alone website but having the Lufthansa logo draped all over the Lufthansa website embedded reservation pages does not help its cause. It does not even offer a basic ‘about us’ page. 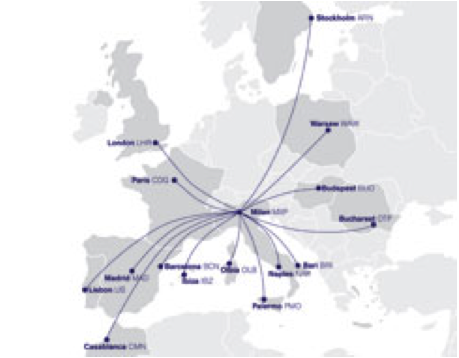 But it conceded defeat, at least as far as Malpensa is concerned, in its efforts to compete on the key Milan-Rome link against the Alitalia – Air One monopoly that connects Milan's smaller but downtown and more convenient Linate Airport with Rome’s possibly not so convenient primary airport, Fiumicino. It suspended its Malpensa-Rome service in Feb-2010 in favour of pressing for Linate route rights instead. Ms Birlenbach considers it “difficult” to sell the Rome route out of Malpensa.

Alitalia’s earlier reduction of its presence on the Milan – Rome route had been a major influence on the decision to base the Lufthansa Italia product there. But that policy has not quite worked out and it failed to penetrate Alitalia’s core market. Another problem facing Lufthansa Italia, Alitalia, and Italian airlines generally is the dramatic increase in high-speed rail services, both domestically and internationally through connections with other rail operators – a predicament that airlines in countries as diverse as France, the UK and China are currently facing up to.

For that reason the fact that transfer passengers represent 15% to 20% of total traffic is good news to Lufthansa Italia, which is now looking to regional partners to serve smaller markets as it experiences a surge in those transit passengers. Notwithstanding such co-operation the fleet could go to 12 aircraft in the near future. In the longer term, Lufthansa Italia could even fly long-haul. Ms Birlenbach stated, “We have already been solicited by Lombardy. There are no plans for the time being but this is certainly an option we are considering.”

For now it operates a three-pillar’ route strategy comprising: enhancing the current network and improving slots; enhancing the domestic network; potentially serving more leisure destinations with flights to the Mediterranean and some destinations in North Africa and the Canary Islands.

As things stand, LI and easyJet are the largest scheduled operators at Malpensa; an unusual situation with one being a regional division of a legacy carrier and the other an LCC (of sorts).

The economic crisis certainly impacted on the carrier’s business plan, but Ms Birlenbach remains convinced that it took the right decision to launch in 2009, if only because it showed the Lombardy region that one of the world’s largest airlines had faith in it and was prepared to make the commitment, which can only gain it kudos amongst the local population in the long term.

In fact, it is an experiment that Lufthansa has the opportunity to replicate elsewhere in Europe where there is still a demand for legacy airline services, but the responsible flag carrier is failing to provide the supply to match.