LAX seat availability dropping despite the efforts of David Beckham

These are difficult times in Los Angeles, as the city and state come to terms with a huge budget deficit. It seems that two of the region’s airports may enter the private sector with the transfer of their lease. Meanwhile LAX, probably the only airport in the world better known by its three letter IATA code than by its actual name, sees demand shifting from traditional transatlantic markets towards Asia.

City of Angels squares up to demonic levels of debt

For decades the dream habitat for aspiring actors and those just seeking the good life in a benign year-round climate, Los Angeles also offers up crime, smog, earthquakes, fires and riots to the dreamers, not to mention the current effects of the recession that forced the California government, effectively broke, to consider paying its creditors in IOUs.

Los Angeles still continues to attract immigrants from across the globe and is now regarded widely as the country’s second city after New York, with a city population approaching four million and 13 million in the wider metropolitan area. Southern California (SoCal), the sub-region dominated by Los Angeles, counts 24 million inhabitants, and is the country’s second most populated such sub-region after ‘BosWash’ the Boston-New York-Washington sprawl in the northeast.

The city region is served by several airports operated by Los Angeles World Airports (LAWA) – Los Angeles International (colloquially known as LAX) in the southwest, Van Nuys in the San Fernando Valley to the north, Ontario in the Inland Empire (San Bernardino County) almost 50 miles to the east and Palmdale, which no longer handles commercial flights. Because of its vast area (the city alone covers almost 500 square miles) it is also served by the non-LAWA airports at Long Beach and John Wayne Orange County, to the south and Bob Hope Airport at Burbank (Glendale/Pasadena to the northeast), which is claimed to be the closest to downtown LA. The lease on Ontario Airport may be sold following an auditor’s report earlier this year (as indeed it may also be at Long Beach). There are no known plans for a change of ownership at LAX, which must have the same degree of importance to LAWA as London Heathrow does to BAA.

The five square mile area, nine-terminal, LAX is far and away the most important airport on the whole of the US Pacific Coast - though it is being challenged by San Francisco on international routes because it has been tardy in constructing new infrastructure - and is the world’s 7th busiest passenger airport (2008 – 59.54 million passengers) and 13th busiest for cargo. All the US’s major airlines are represented with American having the largest passenger share of the market (14.73%), followed by United and Southwest, both with double digit shares, then Delta and Alaska Airways with 7.3% and 4.7% respectively. All the top ten airlines have international routes except Southwest (which has none at all although it does selectively code share on international services) and Continental. Mexicana, with 2.5% of passenger share, only operates international flights at LAX. Federal Express is by far the largest freight airline with a 21.6% market share, followed by Korean Air (5.02%) and American, United and Singapore Airlines, emphasising Los Angeles’ international trade credentials. In terms of revenue pounds (weight) landed, United comes out on top with a 12.54% market share, followed by American and Southwest.

LAX is a major hub for United and Alaska Airlines, and a focus city for American, Southwest, Allegiant Air and Virgin America. It offers direct flights throughout North America, also to and from Latin America, Europe, Asia, Oceania and the Middle East. LAX is also the only US airport to serve three or more international destinations with one million passengers or more annually (Tokyo Narita, London Heathrow and Taipei).

Total seats down by 7.5% this July

Just how the recession has affected capacity at LAX is demonstrated in Chart 1 below. In excess of two million less seats were on offer in Jul-09 compared to Jul-01, two months before the terrorist attacks in New York and Washington that themselves caused a similar reduction in 2002 and 2003. The seat total rose back above the seven million mark in 2004 and remained that way for a further four years until this year, which is 7.35% down on Jul-08. 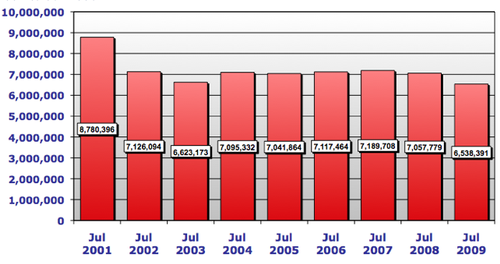 Much the same conclusions can be drawn from Chart 2 below, total flight frequencies in the month of July from 2001 to 2009. In this instance frequencies reduced by 12.9% between 2008 and 2009, indicating the deployment of larger aircraft at LAX. 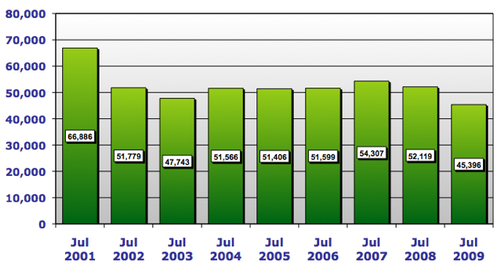 The following charts, three and four, indicate the top ten destinations domestically from LAX in Jul-08 and Jul-09 by available seats per week. There are many factors influencing statistics of this variety, not least the effects of the recession on different cities. Americans have the greatest propensity to travel of any nation, partly because of their intense mobility – a typical family can reasonably expect to move up to three or even four times during the working lives of the parents, to take up new job offers, often isolating family members from each other at opposite ends of the country and complicated by choice of tertiary education facilities by the children.

DFW and Phoenix. The comparative figures for Jul-08 and Jul-09 show a surprising consistency, but there are some notable variations. Traffic to some of the major hubs like Atlanta remained steady but traffic to Dallas Fort Worth grew by 6.7%. DFW has secured a nationally highly significant airport city in its environs, whereas Phoenix, Arizona (-14%), one of the 1980s-90s era favoured ‘sun city’ locations for the new industries that encouraged large scale population movements there, has not fared so well in the latter part of this decade. It is firmly in recession with housing related employment in freefall. Phoenix also developed hapharzardly without an obvious centre and this has caused it to be a less favoured migration location now. 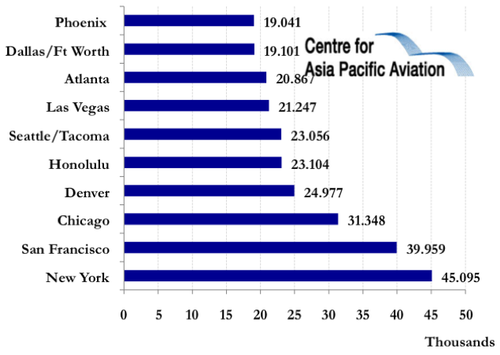 High rollers are reluctant to lose their gambling habit

Chicago, San Francisco and Las Vegas. Chicago, the mid west industrial centre, is down by 5.9%, broadly in line with the reduction in traffic that has been experienced at both its main airports, O’Hare and Midway for the best part of a year. San Francisco seats rose slightly but may in the future be at risk if one of the high-speed rail lines favoured by the Obama administration is completed. Las Vegas seats are up by a whopping 42.6%, surprisingly, given the poor performance at McCarran Airport this year. It appears that SoCal’s high rollers are reluctant to lose their gambling instinct.

Seattle. It is not clear why Seattle-Tacoma disappeared from Chart 4, unless there is an error in the figures. The indication is that it lost over 40% of available seats during the year. However, that is possible. Seattle, the home of Boeing, Microsoft, Amazon, Starbucks and Frasier was able to ride the recession until the end of 2008 but is built on industries (aircraft, consumer IT, and High Street retail) that were most likely to feel the pinch eventually. It is also the home of Washington Mutual (WAMU), the savings and loan institution that has come to be regarded as a pacesetter in the bad practices that brought on the recession. WAMU’s demise is hurting many local investors, charities, tax revenues, as well as employment at all levels, leading to a downtown job loss of probably 20,000 in the city-region. Another casualty is the port business. A substantial part of Seattle’s growth and wealth is tied up in international trade. Container traffic has slowed markedly and is at further risk. Hard times have arrived in Seattle, not just for Joe the Plumber, but the vaunted ‘creative class’ as well. 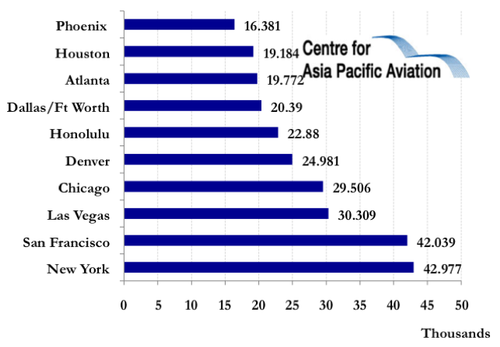 Comparison of charts 5 and 6, the top ten international destinations from LAX by seats per week in Jul-08 and Jul-09 make for more illuminating reading.

Australia. Firstly, the increase in the number of seats offered to Sydney, Australia (+45%) and the emergence of Auckland in the 09 chart with over 7,000 seats. The Oceanic region has so far been least badly affected by the recession, especially Australia, whose economy actually grew by 0.4% in the first three months of 2009, having fallen by 0.5% in the last three months of 2008. But with six of Australia's major trading partners now in recession and economic growth again stalling it will be interesting to observe if this level of seats continues to be made available.

London. Secondly, the collapse of seats made available to London, the only UK gateway with direct flights from Los Angeles, at least for now* (-14.2%). Apart from the recession, the collapse of the Pound Sterling (GBP) against the Dollar and the efforts of David Beckham to keep business up as he commutes between Hollywood, London and Milan trying to get a game of soccer, another factor may be US-Europe ‘open skies’, which has opened up alternative methods of air travel between the US and Britain without necessarily increasing frequencies on existing routes.

(* The City of Los Angeles has, this summer, signed up with Manchester, UK as its 25th ‘twin city’, to develop links in business, art, culture, science and education. This is expected to be a precursor to the establishment of a direct air service once the economic situation improves).

Paris. Also notable is the emergence of Paris in the Jul-09 list – a sign of the growing ‘entente cordial’ between the US and France in the post-Bush era? 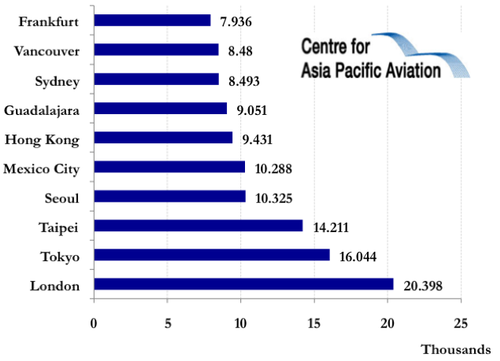 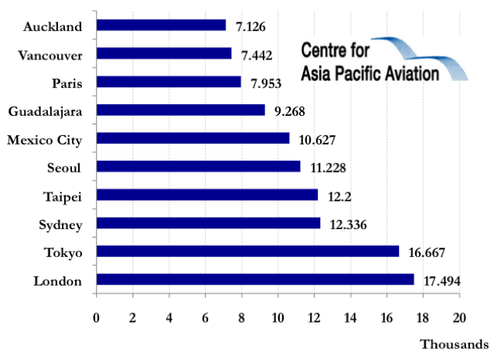 Western Europe, Asia and Latin America. The final three charts (7,8,9) demonstrate the sharp fall off in monthly seats available to western Europe generally (-21.2% between 2008 and 2009), the relative stability of seats to Asia (-4.65%) and the surprising tail-off over two successive years in seats to Latin America (-14.6% followed by -17.5%). 'Surprising' because new services have been inaugurated to LatinAm for other parts of the US on a regular basis during this period. In Jun-09 Volaris commenced a service between Los Angeles and Toluca (Mexico) and will codeshare with Southwest, one of the first such instances of Southwest indulging in an international code share. 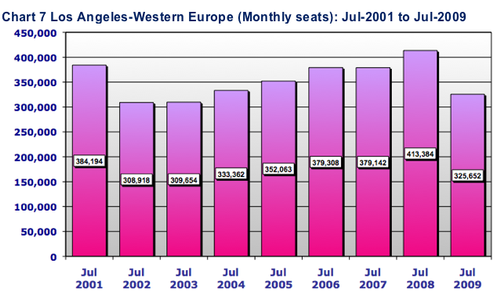 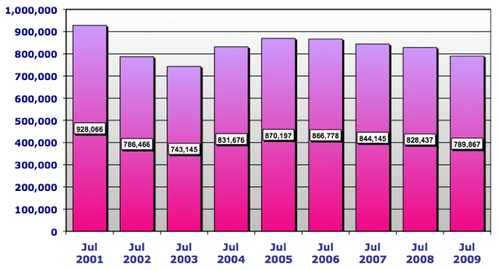 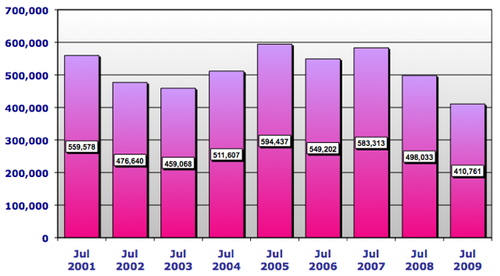