It is no coincidence that those markets have the most developed low cost sectors in Latin America.

GOL made its debut in 2001 and Volaris is 14 years old. Each airline has had more than a decade to stimulate traffic in two countries that boast some of the largest passenger bases in Latin America.

Outside Brazil and Mexico there is no shortage of low cost start-ups in other markets; but it remains to be seen whether LCCs can achieve the same level of scale as GOL and Volaris in Argentina, Chile and Colombia.

Data from CAPA show that Brazil’s passenger level of 103 million in 2018 was nearly the same level as achieved in 2013 before an economic downturn that drove passenger levels below 100 million.

GOL has been Brazil’s domestic market leader for some time, achieving a 35.6% passenger share from Jan-2019 to Jul-2019.

During 2019 all of Brazil’s airlines have benefitted from Avianca Brazil’s market exit: the airline sought creditor protection in late 2018 and ceased operations in May-2019.

For the first seven months of 2019 Avianca Brazil’s domestic market share fell 54% year-on-year. During that same period, GOL, LATAM Airlines Brazil and Azul grew their shares by 5.9%, 4.5% and 16%, respectively.

For the first time in 2019 Volaris overtook the Aeromexico group as Mexico’s leading domestic airline. For the 7M ending in Jul-2019, Volaris’ domestic passenger share was 31% compared with Aeromexico’s 25% share. Combined, Mexico’s three ULCCs/LCCs captured 70% of the country’s domestic passengers during that period.

A central tenet of Volaris’ domestic strategy in Mexico is switching bus passengers to air travel.

Mexico has a population of approximately 129 million people and previously, Volaris has calculated that 38 million Mexicans have never travelled by aircraft. During 2018, approximately 1.1 million passengers took Volaris’ flights for the first time, and the airline expects to register a similar volume in new travellers in 2019.

Volaris has calculated that the bus market in Mexico represents more than 3 billion passengers, “and we believe we can take away a share of those customers”, company executives have declared.

Similar opportunities to switch passengers from buses exist in Argentina, whose trips per capita from 2007 to 2017 jumped from 0.2 to 0.4 (see chart above). The country’s total passenger levels in 2018 were approximately 30 million and Argentina’s total population is approximately 45 million.

After the election of Mauricio Macri as Argentina’s president in 2015 his government adopted a more liberalised stance in the aviation sector, and over the past couple of years three low cost operators have made their debut – Flybondi, Norwegian Air Argentina and JetSMART Argentina.

Data from the Argentinian government show that combined, those three airlines represented approximately 31% of the country’s domestic flights from Jan-2019 to Jul-2019. In fact, JetSMART Argentina only launched in Apr-2019. 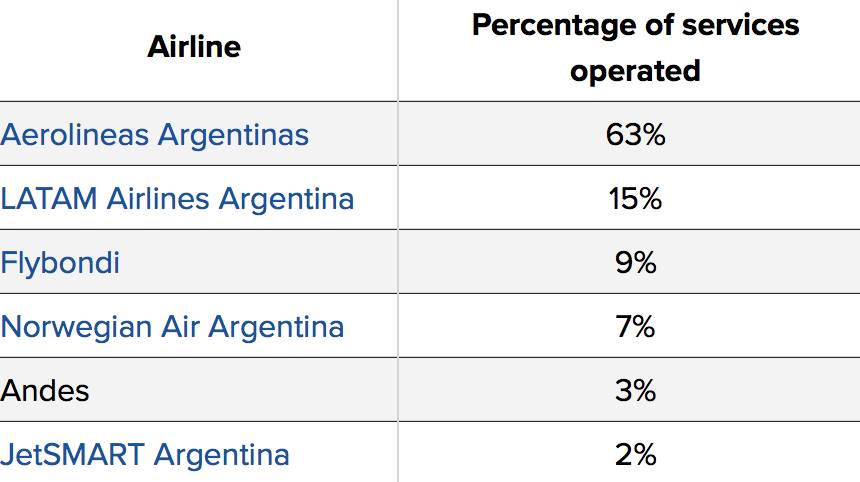 JetSMART Chile made its debut in Jul-2017, and the airline was the first to adopt the ULCC model in lower South America.

The airline made its debut in 2012 and has steadily built up its share to become the country’s third largest domestic airline. Previously, the Viva Group (which includes Viva Air Colombia and Viva Air Peru) has calculated that it will add 63 million passengers to the Latin American market by 2022.

Colombia’s passenger levels were 42 million in 2018, of which 27 million were domestic travellers. The country has a population of approximately 49 million.

In late 2018 the Colombian government forecast that Colombia’s annual passenger levels should reach 100 million by 2030.

How much market share can LCCs achieve outside Brazil and Mexico?

Latin America’s low cost airlines operating outside Brazil and Mexico have achieved impressive market shares in their respective domestic markets. But it remains to be seen how yields at those operators are performing; in the recent past there’s been some yield pressure in Chile, and most of Latin America’s largest economies are battling weakness in 2019.

Colombia and Chile are also facing weakening economic forecasts and Argentina’s economic turmoil continues, with inflation hovering at more than 50% and the country experienced a 20% fall in its currency after presidential primary elections in Aug-2019.

During that contest presidential candidate Alberto Fernández and his running mate former president Cristina Fernández de Kirchner won 47% of the vote, and Mr Marcri’s chances of re-election look to be diminishing. It remains to be seen how a change in administration would affect Argentina’s start-up low cost airlines.

It also remains to be seen whether LCCs outside Brazil and Mexico can ever achieve market leadership, given the respective population sizes of Argentina, Chile and Colombia compared with those larger markets.

But there is no argument that ample opportunities for stimulation remain in Argentina, Chile and Colombia – especially once Latin America’s economy regains some of its footing.

The low cost evolution in Latin America is still unfolding, with countries in the region experience different stages of LCC development.

The ultimate composition of LCCs in the region remains to be seen. But even with strengthening economic headwinds, low cost operators show no signs of tempering their ambitions.