Dynamics have shifted in the Latin American market during the past two years.

Those changes span from the bankruptcies of the region’s three largest airline groups to operators forming new partnerships to capitalise on the recovery.

Avianca’s decision to acquire Viva is the latest in the interesting moves that Latin American airlines are making, or attempting to make, in order to remain competitive now that the COVID-19 pandemic has moved to an endemic phase.

It is the latest move in the chess game Latin American operators are playing to ensure they remain competitive over the long term.

Avianca decides: 'if you can't beat them, buy them'

Avianca is working to solidify its position in the Colombian market through the planned acquisition of its ultra-low cost rival Viva.

Terms of the agreement have not been disclosed, but Avianca stated that both airlines would be a part of the same holding company while maintaining individual brands and strategies.

Avianca emerged from Chapter 11 bankruptcy protection in late 2021 with a clear focus of competing fiercely with its low cost rivals in Latin America. It used the restructuring process to slash costs and reconfigure its network to operate 130 higher-density aircraft on more than 200 largely point-to-point routes by the end of 2025.

Now Avianca has gone a step further, announcing plans to acquire Viva, which launched in 2012. But even as Avianca used the bankruptcy process to slash its costs, its low cost rivals were not resting on their laurels.

In late 2021 Viva executives explained that the company had renegotiated more than 1,000 contracts, ranging from larger companies, such as aircraft lessors, to smaller vendors.

As a result, Viva’s cost per available seat mile (CASK) had fallen approximately -10% below pre-pandemic levels.

How will regulators react to Avianca's pursuit of Viva?

Viva has charted solid growth during its broadly 10 years in operation, and is now Colombia’s third largest airline based on domestic departing frequencies.

Colombia: domestic departing frequency by airline, as of early May-2022 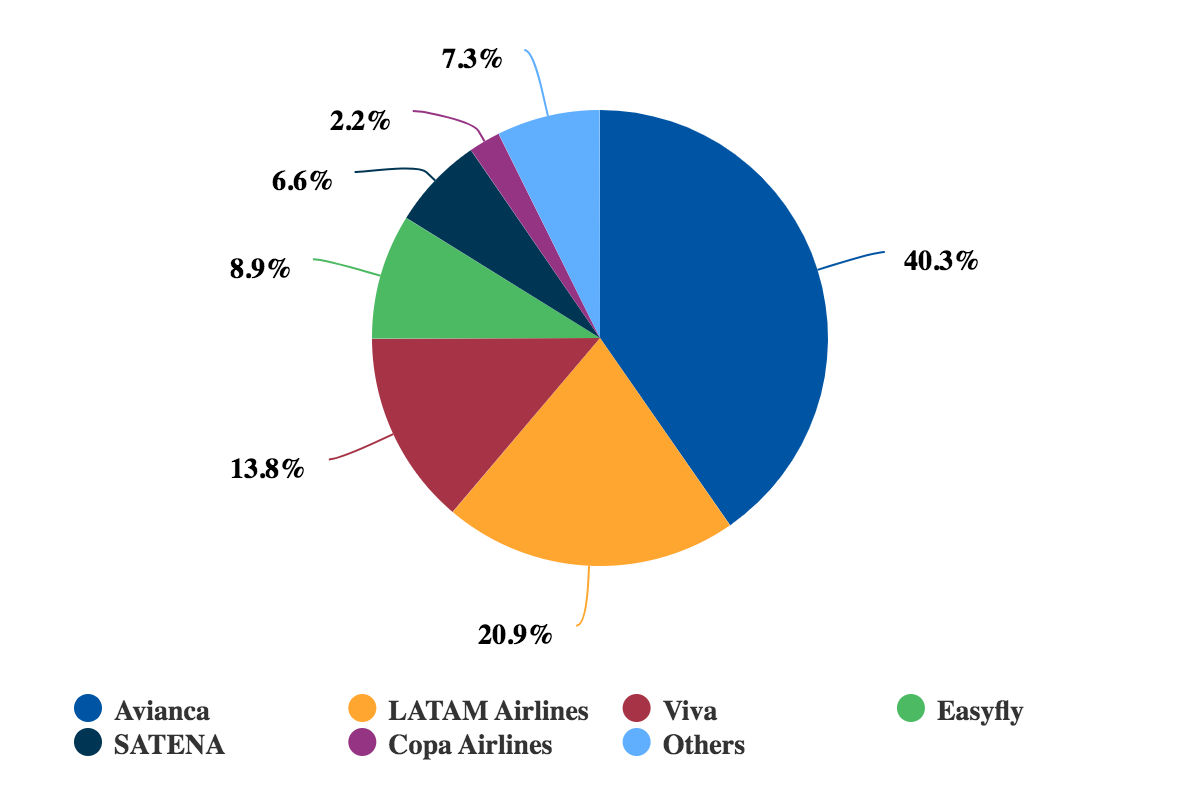 As of early May-2022, Avianca and Viva have a combined domestic share of domestic departing frequencies of just over 50%.

One aspect of Avianca’s proposed acquisition of Viva is how regulators will react.

Other than LAN’s 2010 purchase of Aires, there has not been a lot of high profile merger and acquisition activity in Colombia – and certainly not of this magnitude. LAN basically acquired Aires to establish more of a foothold in the Colombian market.

Questions are also arising over what, if any, concessions would be required for the transaction to gain approval.

Even if Avianca and Viva adhere to their plan to operate as separate entities, the Avianca Group would be dominant at Colombia’s two largest airports: Bogotá and Medellín. As of early May-2022 Avianca has a 50% system ASK share in Bogotá, and the two were the largest airlines at Medellín.

Medellín Jose Maria Cordova Airport: system ASKs by airline, as of early May-2022 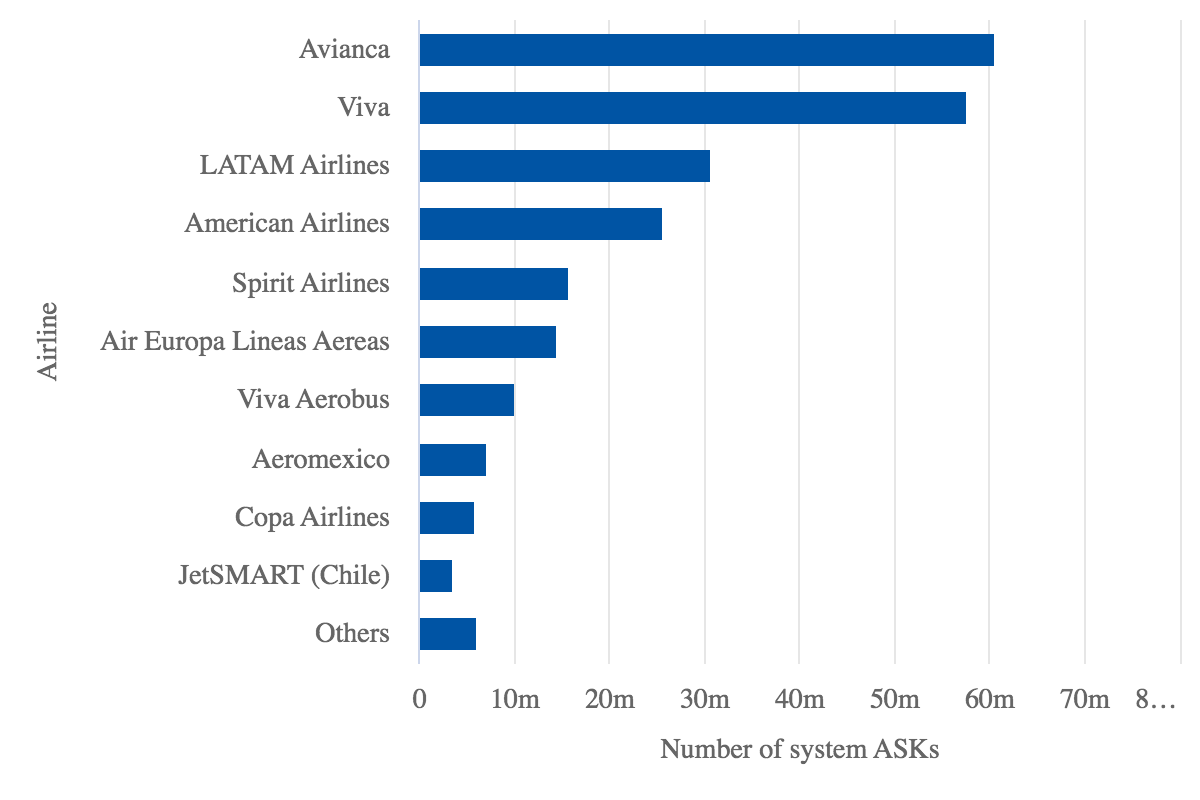 What – if any – fleet changes will occur at Avianca and Viva?

Another element that will need to be settled is if any fleet changes will occur at Avianca and Viva.

CAPA's fleet database shows that Avianca has 136 aircraft in service and 90 on order.

Avianca Holdings: fleet summary, as of early May-2022

According to CAPA's fleet database, Viva is operating 23 aircraft and has the same number of aircraft on order.

At one point Viva stated that it was planning to grow its fleet to 50 aircraft or so by 2025, and it is not yet known whether those growth plans will remain intact if the proposed acquisition is successful.

Combined, the airlines have a total of 113 aircraft on order, the majority of which are Airbus A320neo family narrowbodies.

Avianca’s decision to acquire Viva is the latest in the interesting moves that Latin American airlines are making – or attempting to make – in order to remain competitive now that the COVID-19 pandemic has moved to an endemic phase.

Azul attempted to spur consolidation in Brazil’s market with its efforts to acquire LATAM Airlines Group. But Azul ultimately dropped its efforts to buy its rival, concluding that the valuation of LATAM in the company’s Chapter 11 reorganisation plan was higher than Azul thought to be credible.

GOL recently acquired the small Brazilian operator MAP, but the main logic behind that purchase was GOL’s ability to secure more slots at one of Brazil’s most strategic airports: São Paulo Congonhas.

There have also been new partnerships emerging in Latin America – the ULCCs Allegiant Air and Viva Aerobus are working to establish a joint venture in the US-Mexico cross border market. American Airlines has opted to take a stake in both JetSMART and Brazil’s GOL.

Latin airlines are playing a game of chess with new partnerships

Although little is known regarding Avianca’s formal proposal to purchase Viva, it is the latest move in the chess game Latin American operators are playing to ensure that they remain competitive over the long term.

And it is unlikely to be the last move made in the game.