The trans-Atlantic has been a challenging market for large US network airlines during the past year for a variety of reasons – the UK Brexit vote, terrorist attacks, expansion by low cost airlines and currency fluctuations. As a result of those coalescing factors, unit revenues for American, Delta and United in their respective trans-Atlantic entities have been less than stellar.

Despite lingering challenges on the trans-Atlantic, those three airlines are presenting a somewhat positive outlook for the US summer season driven by strong US point of sale that is offsetting weakness in Europe, particularly in the UK as its currency remains weak against the USD.

None of the large three global US network airlines are declaring that conditions in the trans-Atlantic are on a definitive road to recovery. In fact, Delta has warned that it will take longer than expected to attain positive unit revenues on trans-Atlantic routes, while American and United appear to hold tempered expectations for the region beyond summer 2017.

Delta offers a mixed assessment on its trans-Atlantic market performance

The airline attributed approximately 1.5ppt of its unit revenue decline in 1Q2017 to currency pressure, and has warned that attaining a positive unit revenue performance in the trans-Atlantic could take longer than expected.

Delta has forecast robust point of sale demand from the US to Europe for the peak US travel season in 2017, and over the long term the airline is working to adjust seasonal capacity with demand in its trans-Atlantic markets, and to maximise cost efficiency by upgauging older Boeing 767s with Airbus A330s. That transition is scheduled to start in the US summer period. Delta plans to retire three 767s used on trans-Atlantic routes by YE2017.

One of the drivers of Delta taking a 49% stake in Virgin Atlantic and forging a joint venture with the airline was expanding its presence at London Heathrow. Combined, those airlines represent 24% of the available seats between the US and Heathrow for the week of 7-May-2017. 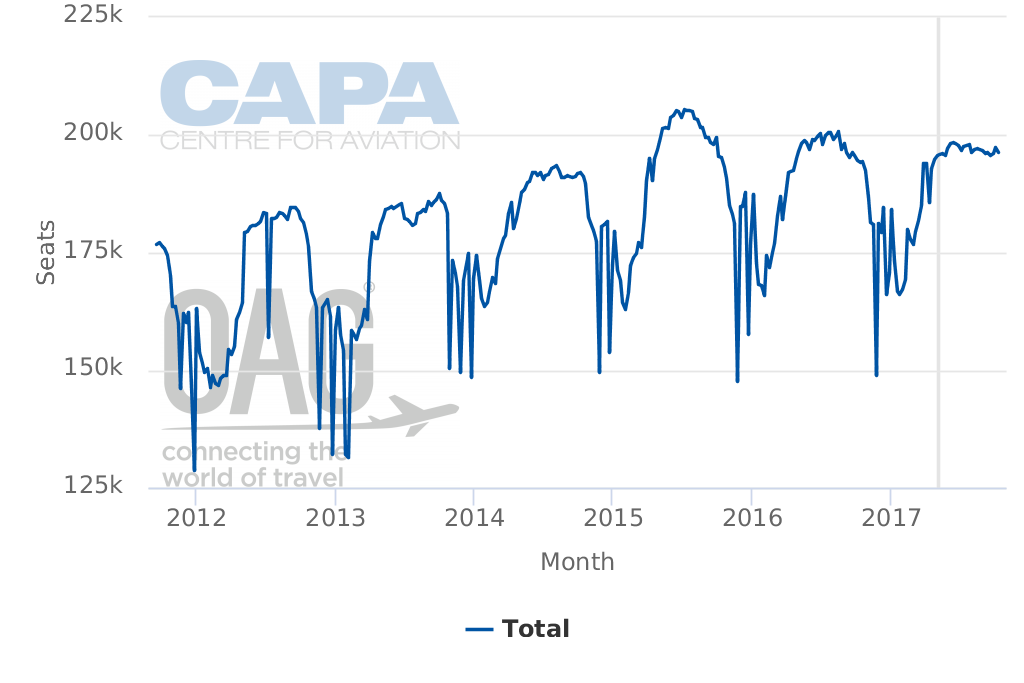 Recently, Delta executives fielded queries about the potential risks of the US banks moving operations from London to other European capitals post Brexit. Delta’s management stated that it was too early to outline a strategy for a possible decline in demand, noting that the UK’s economy had held up better than expected after the Brexit vote.

For now, Delta's interpretation is that the stronger US point of sale has offset declines in UK sales origins as the GBP has weakened against the USD.

American posted a 5.9% passenger unit revenue decline in its trans-Atlantic markets year-on-year during 1Q2017 on the largest capacity decrease – 6.9% – among the three large US global network airlines (see chart above).

The airline has explained that half of the trans-Atlantic PRASM decline was due to an out of period adjustment that positively affected its 1Q2016 results. Another 1.5ppt of the 1Q2017 drop was due to the falling GBP. American and its oneworld joint venture partner represent broadly 60% of the seats between the US and London Heathrow for the week of 7-May-2017.

American has concluded that it continues to see modest improvements in trans-Atlantic markets as a result of some comparisons becoming easier after the lapping of certain terrorist events. But the still weak GBP, and the growth of low cost airlines, are still presenting challenges on trans-Atlantic routes.

Forward data from CAPA and OAG show seats between the US and Western Europe are scheduled to grow approximately 5% year-on-year in mid-Jul-2017, which is the peak travel period for US point of sale. Norwegian Air Shuttle’s seats are forecast to grow 39% year-on-year and Icelandic airline WOW Air’s seats are jumping 99%.

However, those two airlines still have low overall seat share compared with the larger airlines. Combined, the Norwegian group and WOW have just an approximate 5% seat share between the US and Western Europe for mid Jul-2017.

Seat share for American, Delta and United and select LCCs from the US to Western Europe for mid-Jul-2017

American believes the industry undertook a pricing reset in the trans-Atlantic market heading into 4Q2016, and has said that it has been a bit more aggressive versus low cost airlines. The company has also stated that US point of sale for trans-Atlantic routes for the peak summer period is stronger than in the same period a year ago, and it expects to post higher load factors year-on-year during the high demand season. American’s trans-Atlantic load factor in 3Q2016 (which includes the high demand summer season) was 78.3% – a 3.9ppt drop year-on-year.

The airline is also leveraging its joint venture with IAG (parent to British Airways, Iberia, Vueling and Aer Lingus) to compete with new low cost competitors in the trans-Atlantic.

CAPA has previously reported that IAG’s new low cost long haul arm LEVEL – debuting in Jun-2017 – will be included in the joint venture with American and IAG. LEVEL will operate on flights from Barcelona to Los Angeles, Oakland, Buenos Aires and Punta Cana. American has stated that LEVEL would launch using the Iberia code, and although that does not preclude LEVEL from using its own code in the future, as an umbrella business of Iberia, American will share in the revenue.

United's view: Star partners are not discounting as heavily as other alliances

United Airlines posted a positive PRASM result on trans-Atlantic routes in 1Q2017, driven by calendar placement of the 2017 Easter holiday in Mar-2017 versus Apr. The airline has explained that it has not adjusted pricing in the markets it operates to in conjunction with its Star Alliance partners. However, United said that oneworld and SkyTeam partner airlines had adjusted pricing points.

United has calculated that oneworld and SkyTeam alliance members have restructured and lowered their prices in trans-Atlantic markets, and advance purchase fares for those groupings have dropped 20% to 30%. Fares in that same class among Star Alliance airlines had only fallen 10%.

Even with its lower adjustments for advance bookings, United is feeling the effects of pricing pressure in trans-Atlantic markets, but has also cited strong US point of sale for the US summer high season.

However, in the latter half of the peak travel season the dynamics shift to more Europeans travelling to the US, which should result in more weakness for United in the trans-Atlantic in 3Q2017. The airline is forecasting a flat unit revenue performance year-on-year in trans-Atlantic markets during 2Q2017.

Challenges remain status quo for US airlines in trans-Atlantic markets

After more than a year of challenging conditions in the trans-Atlantic market, the three large US global airlines have resigned themselves to bracing for weakness in the midterm. Although demand looks solid for the summer high season, pricing pressure is lingering and geopolitical and economic uncertainties show no signs of waning.

Given that context, American, Delta and United will all need to craft strategies to handle the challenges that remain inherent in the trans-Atlantic market. But the general message is that unit revenues in those markets will remain under pressure for the foreseeable future.