United Airlines expects to attain a positive passenger unit revenue performance in 2Q2017, which would mark the first positive result for the airline in that metric since early 2015. The airline’s PRASM results in 1Q2017 were in line with its initial forecast, which was more conservative than those of its larger US rivals.  American and Delta refined their 1Q2017 unit revenue forecast downward, while United kept its guidance intact, and its performance fell within its initial estimates.

The airline’s 2Q2017 positive unit revenue outlook is driven by many factors, including a shift in its management of close in bookings to reduce reliance on advance purchase discounts. Latin America and the US domestic market continue to be bright spots for United, while declines in Pacific unit revenue continue to moderate. United’s better than expected unit revenue performance in trans-Atlantic markets in 1Q2017 should moderate as point of sale tilts more toward Europe later in the year.

Markets seem still to be digesting United’s decision to increase its planned 2017 capacity growth by 1.5ppt. United is stressing that much of the growth is driven by increased gauge, and the growth is designed to restore United to its natural share in the US domestic market.

United’s consolidated passenger unit revenue was flat year-on-year in 1Q2017, which was in line with a forecast ranging from a 1% decline to an increase of 1%.

United’s domestic passenger unit revenues notched downwards 0.1% in 1Q2017, but the airline expects positive growth in 2Q2017. The company has adopted changes to managing its close in bookings. For the past two years, United would never allow its 60 day advance bookings to fall 2% behind.

If the goal was to keep bookings high, the easiest way was to lower prices, and that was the method United adopted, company president Scott Kirby recently explained. A negative byproduct of that strategy was selling out too soon, spilling its natural market share of close in business demand to its competitors, Mr Kirby stated.

The company has now opted to take on more risk with advance bookings to gain back high yield business customers. Not surprisingly, United believes the strategy shift is working, citing a 12% year-on-year rise in close in bookings during 1Q2017, and 11% growth in corporate revenue.

United believes that the lowered unit revenue outlooks issued by its competitors were not about weakness in demand, rather it was due to United’s ability to gain customers it could not previously accommodate because of the absence of last minute seats for those higher yielding passengers. “While the whole industry is seeing strong close-in demand, United is better positioned to capitalize on it with more seats to sell close-in on a year-over-year basis”, said Mr Kirby.

The company posted the highest passenger unit revenue improvement in its Houston hub during 1Q2017, after reducing capacity by ASM deployment Houston at United's fourth largest hub during the past couple of years, due to weakness in the oil sector.

United believes that the energy business in the market, while still reduced significantly compared to its historical performance, is beginning to recover. United’s corporate revenues in the energy sector were up 13% year-on-year in 1Q2017. 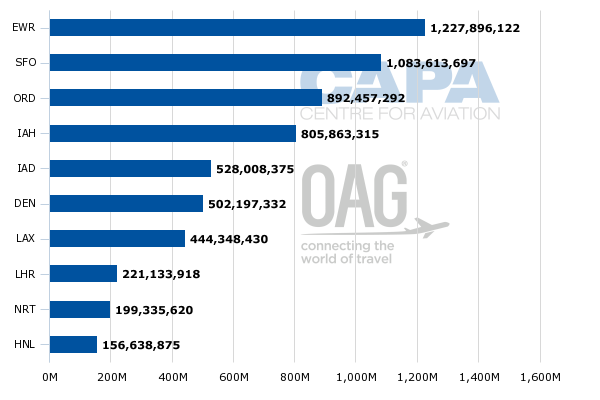 Similarly to the situation for the rival Delta, Latin America has been a bright spot for United during the past couple of quarters. Its PRASM on Latin American routes grew 7.3% in 4Q2016, before moderating to an increase of 2.8% in 1Q2017. United cited continuing improvement in Brazil unit revenue and strong results in Argentina. The company forecasts a PRASM increase in the mid single digits in Latin America for 2Q2017, driven in part by the timing of the Easter holiday and strong performances in Brazil and Argentina.

Mr Kirby highlighted United’s desire to expand its relationships in Latin America, particularly with its fellow Star Alliance partners Avianca and Copa. The company is holding talks with Avianca about a deepened partnership, including a joint venture, but shareholder infighting at Avianca is casting clouds over those discussions.

United has deep ties to Copa; its merger partner Continental previously held an equity stake in Copa. Forging deeper ties with Avianca, Copa and Azul (a non aligned airline in which United has 4% stake) would allow United to give American and LATAM Airlines group a “run for their money in Latin America”, Mr Kirby has said.

The oneworld partners American and LATAM are awaiting approval to forge a joint venture covering several countries within Latin America. Those airlines are already dominant in the US-Latin America market, and Delta is working to gain strength through a new immunised joint venture with its SkyTeam partner Aeromexico while upping its equity stake in Mexico’s largest airline to 32%.

Data from CAPA and OAG show that American and LATAM Airlines Group hold a 46% seat share between North America and upper South America for the week of 17-Apr-2017, while stand alone United holds a 10% share, and Delta’s share is 9%. Avianca’s share is 14%, which could help lift United’s stature in the region if the two airlines press forward with a joint venture.

In the strategic US-Mexico market, Aeromexico and Delta control 23% of the seats, compared with 20% for American and United, respectively.

United posted sequential improvement in trans-Pacific PRASM in 1Q2017, recording a 3.5% decline in the quarter compared with a 6% drop in 4Q2016. The airline expects the declines to moderate further in 2Q2016.

Previously, United has cited overcapacity in the Pacific as one driver of the region’s weak performance, and has often predicted that some of the capacity growth should moderate in 2H2017 as caps in the bilateral agreement between China and the US are reached.

Most US airlines operate to China’s larger markets Beijing and Shanghai, but United has launched service from its Pacific gateway in San Francisco to the secondary markets of Chengdu, Xi’an (seasonal) and Hangzhou.

Mr Kirby has highlighted capacity pressure in secondary markets, which remain a challenge for the airline. He cited subsidies that airlines are receiving to open up new routes from China to secondary cities. In Mar-2017 Hainan launched flights from Chengdu to San Francisco, and in late 2016 Sichuan Airlines added service from Los Angeles to Hangzhou, with continuing service to Chengdu. 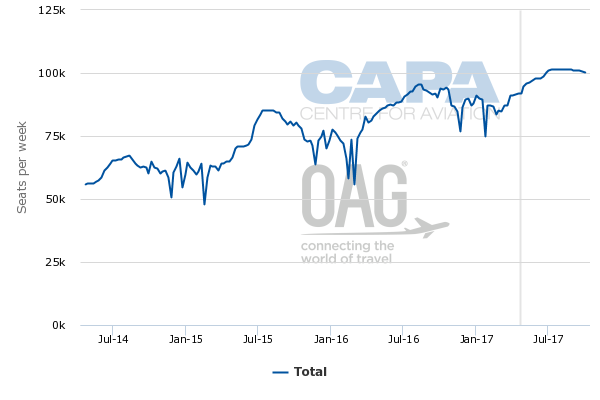 The trans-Atlantic continues to be a challenged market for US airlines due to geopolitical developments and competitive capacity additions. After posting a 2.8% PRASM decline in 4Q2016 in trans-Atlantic markets, United posted a 2.1% increase on routes to the region in 1Q2017; this was due to the calendar placement of the Easter holiday in Mar-2017.

United’s trans-Atlantic forecast for 2Q2017 is a flat performance year-on-year. Mr Kirby has said that oneworld and SkyTeam alliance members have restructured and lowered their prices in trans-Atlantic markets, and advance purchase fares for those groupings have dropped 20% to 30%. Fares in that same class among Star Alliance airlines had only fallen 10%, he said.

In 1H2017 United’s trans-Atlantic is tilted more heavily toward US point of sale. But in the latter half of the peak travel season the dynamics shift to more Europeans travelling to the US, said Mr Kirby, which should result in more weakness in the trans-Atlantic in 3Q2017.

United is taking great care to reiterate that its decision to make a domestic push rests on recent assessments that one significant driver of United’s revenue disadvantage against its peers was that the airline had lessened its focus on the US domestic market and subsequently lost share.

Mr Kirby noted that United’s 2017 capacity growth entails a 5% increase in gauge that is partially offset by fewer departures.

He also contends that United’s changes to its domestic network – pulling regional jets off larger routes such as Newark-Atlanta and improving connectivity to smaller markets at its hubs – is working, reflected in United’s 2Q2017 PRASM forecast of a 1% to 3% increase. United’s rival Delta is forecasting unit revenue growth of 1% to 3% in 2Q2017. Mr Kirby also remarked that accounting issues are creating 50 to 70 basis points of revenue headwind for United in the second quarter, so that United is in fact expecting a stronger core revenue performance than numbers suggest.

The airline’s problems in the domestic market stemmed from responding to market pressure – in order to keep capacity growth low, reducing capacity and removing regional jets from smaller markets such as Rochester, then placing them on larger routes such as Newark to Atlanta, Mr Kirby explained. However, that was driving lower margin growth.

United’s move in the domestic US domestic market is not designed “to go in and invade someone’s hub”, Mr Kirby stressed. “This is about restoring United to where it should have been.”

Markets and investors are likely to adopt a wait and see attitude towards United’s strategy of gaining lost ground in the US domestic market. The airline opted to initiate a marked rise in supply just as investors were breathing a sigh of relief that US airline unit revenue was finally reaching an inflection point, after idling in negative territory for two years.

In the short term United’s logic to find ways of regaining lost ground in the domestic market seems sound, given its passenger unit revenue forecast for 2Q2017. But it may take time for investors to bless the strategy, even as United champions the results its domestic revamp are producing.