Latin American airline group LAN has reported a significant improvement in its third quarter earnings following a surprisingly weak second quarter. Latin America’s buoyant economy drove the strong showing and has LAN confident it can remain highly profitable in 4Q2011 and 2012 despite the challenging global market conditions. LAN’s planned merger with Brazil’s TAM, which will now almost certainly be completed in Mar-2012, further improves the group’s medium to long-term outlook as LAN gains access to Brazil, the region’s largest economy by a wide margin and one of the world’s largest emerging markets.

LAN turned a net profit of USD95 million in 3Q2011 and an operating profit of USD161 million. While still representing an 11% drop in net earnings compared to 3Q2010, the performance was far better than 2Q2011, when LAN saw its net profit tumble by 74% to only USD16 million. LAN’s operating margin, which in recent years has been one of the highest in the global airline industry, also returned to a respectable 10.8% in 3Q2011 compared to an unusually low 4.2% in 2Q2011.

LAN credited the improved financial performance compared to the prior quarter to stronger yields and load factors across its passenger and cargo businesses. Revenues for 3Q2011 were up 29% to USD1.487 billion. Passenger revenues increased by 33% to USD1.060 billion while cargo revenues were up by 23% to USD395 million. 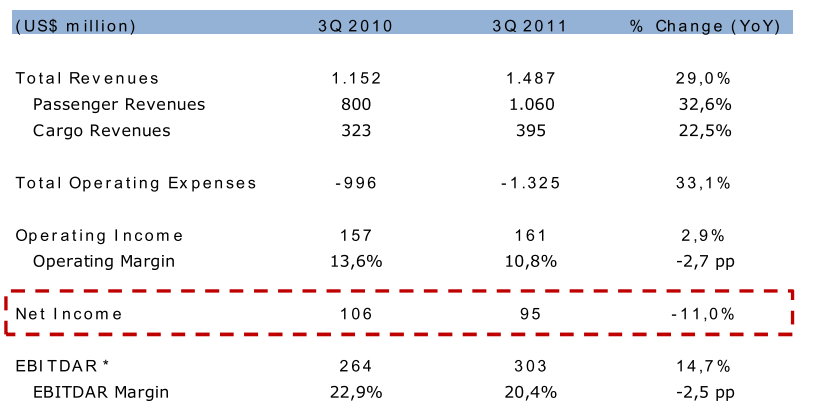 Operating costs for the quarter increased 33%, including an 11% jump in non-fuel costs due partially to foreign currency fluctuations. LAN’s fuel bill increased by 43% but this was offset by fuel surcharges, yield growth and higher load factors. 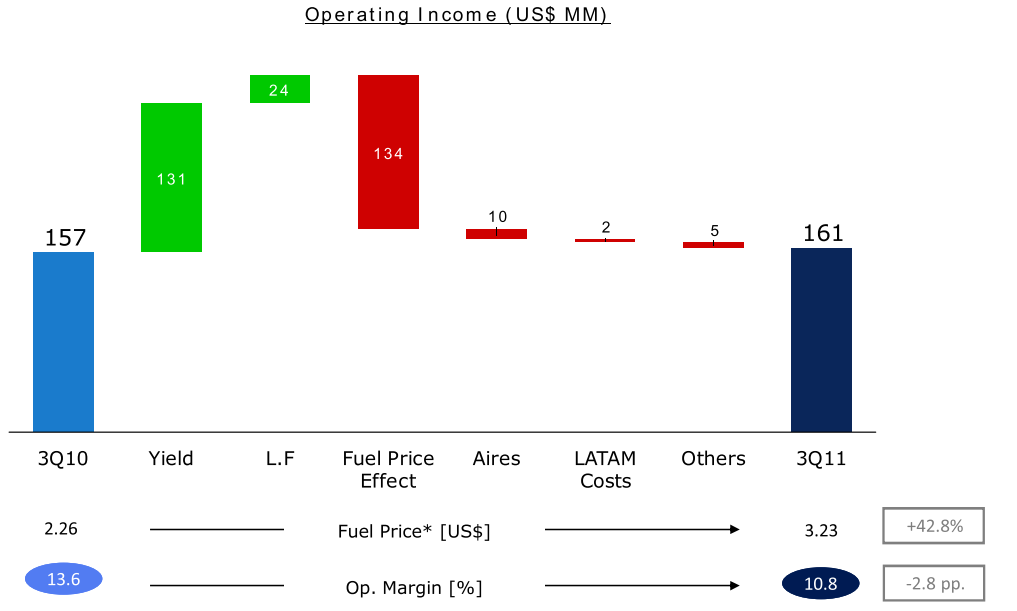 LAN’s new Colombian subsidiary Aires, which the group acquired late last year, remains in the red but is showing signs of improvement as restructuring efforts near conclusion. During LAN's 3Q2011 conference call with analysts, LAN executives revealed that Jul-2011 was Aires’ first month in the black on an operating level since the acquisition although small losses were incurred during the months of August and September.

Aires will be formally rebranded LAN Colombia in early Dec-2011. Rebranding costs already incurred during 3Q2011 include repainting Aires’ fleet of 23 aircraft in LAN’s livery and migrating Aires’ IT systems to the LAN platform.

Aires, which now has a fleet of nine B737-700s and 14 Dash 8s, will also start operating three LAN-branded A320s in Nov-2011. Since the beginning of this year LAN has already adjusted Aires’ network, dropped the carrier’s previous LCC model and changed its pricing strategy. After the rebranding Aires will formally become part of LAN’s full-service regional network.

LAN previously said it expects Aires will be break-even by early 2012. It expects the carrier’s positioning in the Colombian market will improve following the rebranding as passengers will start to recognize the improvement in the carrier’s operation and product. After initially cutting capacity as part of the restructuring process, Aires will resume expansion in 2012 as domestic capacity is increased by about 10% - matching LAN’s expectations for the overall Colombian market.

Aires’ entire B737-700 fleet is expected to gradually be replaced with A320 family aircraft, providing commonality with the rest of the narrowbody fleet at LAN and TAM. LAN has not formally decided whether to retain Aires’ Dash 8 turboprop fleet although they will likely be returned to lessors as their leases expire. The current LAN group fleet plan already has three Dash 8s being returned in 2014. 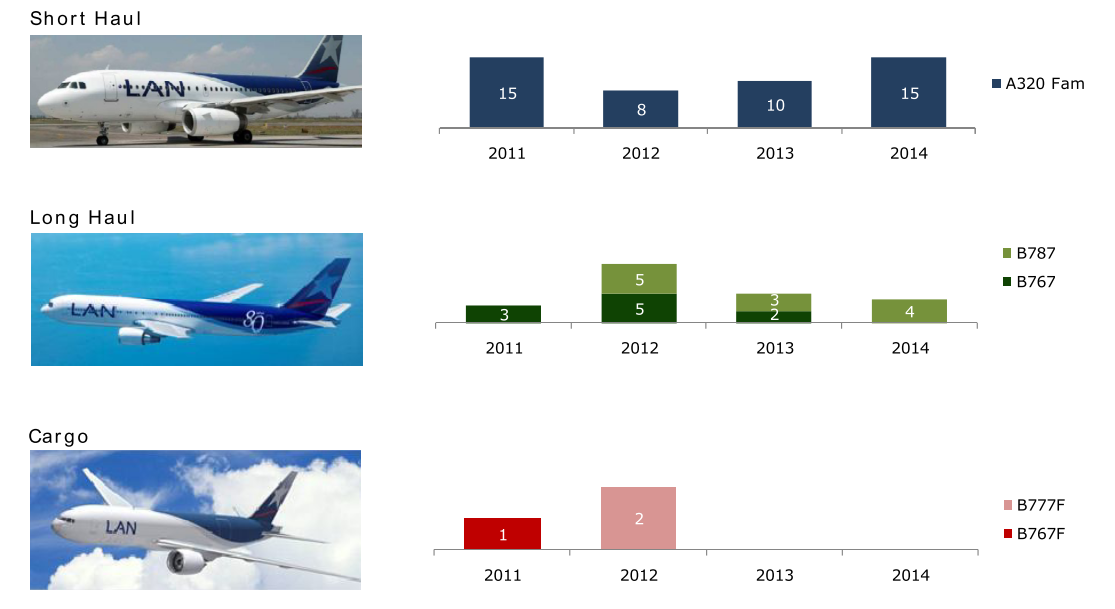 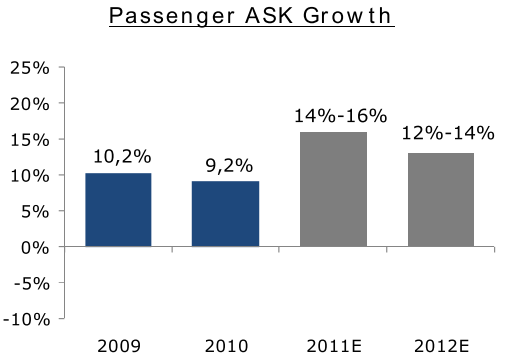 LAN VP commercial planning Luis Eduardo Riquelme told analysts during this week’s earnings conference call that LAN is confident the double-digit capacity increase planned for 2012 can be absorbed despite the relatively bleak global economic outlook because demand for services within Latin America is expected to remain very strong, offsetting the expected slowdown in its long-haul markets. “Most of the growth is driven within Latin America and within some of our domestic markets, which are doing pretty well,” Mr Riquelme explained.  “We see strong demand in Chile in general and we expect also that with the integration [with TAM] there will be new opportunities within the region ... Brazil is a market that has been doing very well this year and we expect that to continue in the future.” 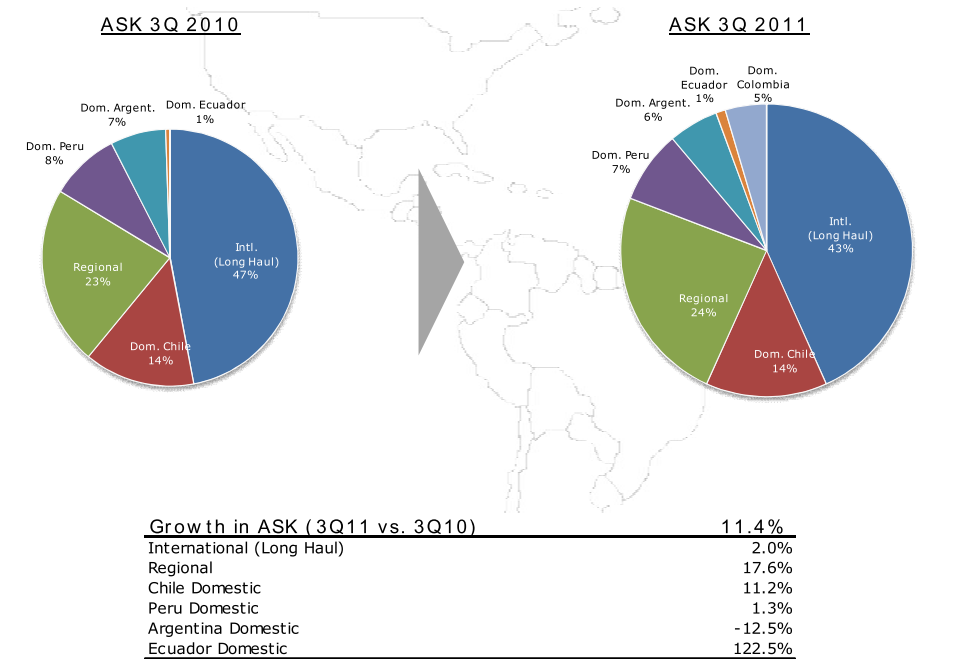 LAN Cargo VP Claudio Silva told analysts that despite the recent slowdown in global air cargo traffic, LAN still expects “modest” cargo traffic and revenue growth in 2012. “We will face in 2012 no doubt a more challenging market but we will face very strong northbound markets ... both to Europe and to the US,” Mr Silva said. 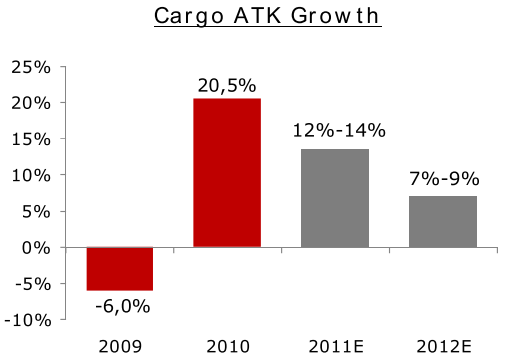 LAN is bullish on its overall outlook as it expects to continue to cash in on its leading position in the Latin American market, which will be further augmented once it merges with Brazil’s TAM. LAN says its strong 3Q2011 performance shows its “ability to leverage continued growth opportunities in both cargo and passenger markets, enhancing the company’s leadership position in Latin America and reflecting its ability to face and mitigate impacts of adverse scenarios such as fuel price volatility”.

Boosting its short and long-term outlook, LAN is now confident it will be able to finally conclude in late 1Q2012 its proposed merger with TAM, which was first forged in Aug-2010. The biggest obstacle was cleared last month when Chilean anti-trust approved the merger on the condition that 14 mitigation measures are implemented.

LAN has since appealed three of the proposed mitigation measures to Chile’s Supreme Court, claiming they are “unconstitutional and disproportionately severe”. But the airline group says it does not expect the appeal to result in any further delays in completing the merger. LAN CFO Alejandro de la Fuente told analysts during this week’s conference call that the carrier expects a ruling from the Supreme Court by the end of December.

If the ruling is delayed until 2012, LAN will likely decide to move forward with the merger without a final decision on the three challenged mitigation measures. “For us the priority is to not delay the process,” Mr de la Fuente told analyst. “The objective is to go with the synergies as soon as we can.”

As LAN is moving forward with other parts of the merger transaction while it awaits the Supreme Court decision, the appeal for now is not slowing down the merger process. As LAN has determined the mitigation measures would have minimal impact on the synergies that are to be generated by the merger, it would not be in LAN’s interest to continue the appeal if it the appeal for any reason later threatens to result in a further delay to the merger process.

The three mitigation measures being reviewed by the Supreme Court include a requirement for special approval of any codeshare outside the single global alliance LATAM selects (LAN and TAM have up to 24 months after closing the merger to select a single alliance, which is expected to be oneworld); a requirement to give up four fifth-freedom rights to Lima in Peru; and a requirement that LATAM gives unrestricted access to a consultant which will be used by TDLC as part the post-merger surveillance process.

Small Chilean carrier PAL also initially appealed the TDLC ruling to the Supreme Court, arguing that the mitigation measures proposed by TDLC were not sufficient. But PAL this week dropped its appeal as part of a settlement with its rival. LAN has reported that it will incur a one-time charge of USD5 million related to its settlement with PAL as it has agreed to cover the legal costs PAL incurred in fighting the proposed merger to the TDLC and Supreme Court.

With the TDLC having now approved the merger, LAN and TAM are now only waiting for approval from Brazilian anti-trust authority CADE. This approval is believed to be forthcoming with few or no mitigation measures expected.

LAN says all required approvals in Europe, including from anti-trust authorities in Germany, Italy and Spain, have also now been secured. As a result the long-planned merger is on course to finally be concluded “towards the end of 1Q2012”.