LAN turned a net profit of only USD16 million in 2Q2011, a 74% decrease compared with the USD61 million profit from 2Q2010 and the airline group’s lowest profit for any quarter since 2Q2009. LAN, which over the past several years has had one of highest airline profit margins in the world, also recorded its lowest operating profit margin in five years. The Chile-based airline group said its 2Q2011 results were impacted by higher fuel prices, operational disruptions caused by volcanic ash and losses at new Colombian subsidiary Aires. 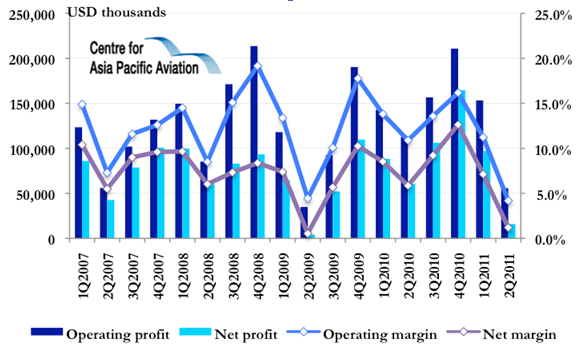 LAN blames the unusually low operating margin in 2Q2011 on a series of factors. The eruption of the Puyehue volcano in southern Chile, which affected air traffic in Chile and Argentina during Jun-2011, resulted in USD18 million in operating losses. Fuel prices increased by 46% compared to 2Q2010, resulting in $143 million in additional fuel costs and a $120 million impact after factoring in fuel hedge gains.

The 2Q2011 operating result was also impacted by USD8 million in costs related to the pending merger transaction with Brazil’s TAM. Aires, which LAN acquired late last year and is now in the process of restructuring, also contributed USD11 million in operating losses. 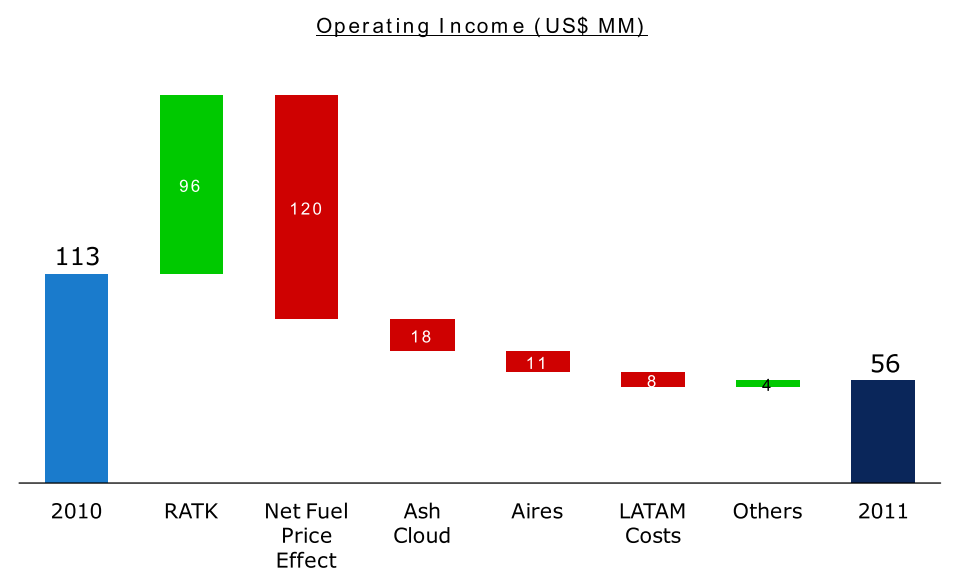 Losses at Aires have now totalled USD22 million since the unprofitable Colombian low-cost carrier was acquired by LAN in 4Q2010. LAN previously stated it expects Aires to be break even by early next year, at which point it will complete a restructuring and be rebranded LAN Colombia. In its 2Q2011 results presentation, LAN said the turnaround project at Aires includes implementing LAN’s punctuality and service standards, securing IOSA certification, eliminating unprofitable routes and applying revenue management.

LAN’s relatively low net profit for 2Q2011 was also affected by a USD66 million settlement agreement at its cargo business related to a civil class action suit. However, this was partially offset by the sale of LAN’s courier operation, Blue Express, which netted USD45 million.

LAN during its 1Q2011 analyst call was bullish for 2Q2011 and said demand in the region remains strong, allowing it to pass on rising fuel costs to the consumer. But in the end, LAN was only able to partially offset the rise in fuel costs through fuel hedge gains, fuel surcharges and higher fares. LAN’s passenger yield increased 10% in 2Q2011 while its cargo yield improved 16% (both are inclusive of the fuel surcharges).

The worse-than-expected 2Q2011 performance has prompted LAN to again slightly reduce capacity growth for the remainder of 2011. Three months ago LAN adjusted plans for 2011 passenger capacity growth from 20%-22% to 16%-18% LAN now expects capacity growth of 14%-16% this year. It says new figures include the impact on capacity from the recent ash cloud, which continued to cause disruptions in some markets earlier this month.

Capacity across the group was up 12% in the 2Q2011. RPKs were up 20%, resulting in a 5 ppt gain in load factor to 77.6%.  But the improvement in yields and load factor were simply not enough to offset the rise in fuel and other costs.

While down 6 ppt compared with the initial plan, LAN’s expected ASK growth for 2011 still surpasses the 9% ASK growth from 2010 as well as the 10% recorded in 2009 and the 11% in 2008. Some of the growth this year is being driven by the Aires acquisition as well as expansion in LAN’s short/medium-haul international operation and in the domestic operations in Chile and Ecuador.

Domestic accounted for 32% of ASKs, compared with 30% in 2Q2010. The driver of this growth is Colombia, a domestic market LAN only entered at the end of last year. Aires’ domestic operations now accounts for 4% of group ASKs. Over the last year LAN has reduced domestic capacity Argentina and Peru but has significantly increased capacity in its two other domestic markets – Ecuador and Chile.

The new aircraft will be partially offset by the return next year of three of Aires’ nine B737-700s. Eventually LAN expects to replace all of Aires’ B737-700s with A320 family aircraft from the group’s order book.

For now LAN is not slated to return any B737-700s in 2013 but plans to return four B737-700s in 2014 along with three of Aires’ 14 Dash 8 turboprops. But the phase out of Aires’ existing aircraft – which do not fit at all with the fleet composition of the rest of the LAN group - could be accelerated if LAN is able to negotiate early returns with leasing companies.

LAN says it is also now working on installing winglets on its B767s fleet, resulting in a 4% to 5% fuel burn improvement. It also plans to reconfigure the B767s operated by LAN Ecuador with a larger economy class section, resulting in a 7% decrease in costs per ASK at the Ecuadorean long-haul operation.

Last month LAN placed an order for 20 A320neos. It says these aircraft will be delivered in 2017 and 2018. According to Ascend data, LAN currently has 145 aircraft on order, including about 100 A320 family aircraft.

Meanwhile, LAN faces an additional delay in its merger with TAM. CAPA reported early last month that LAN and TAM were expecting a decision in Jul-2011 from Chilean antitrust court TDLC. LAN now says “the TDLC’s resolution is expected in August”.

TDLC is considered the last major hurdle in proceeding with the merger, which was first unveiled in Aug-2010 and originally was anticipated to close in 2Q2011. LAN and TAM also still need to secure final approval from antitrust authorities in Spain, Brazil, Italy and Argentina but these are expected within the next several weeks.

The TDLC decision will most likely be positive but could be appealed, leading to a further three-month delay in proceeding with the merger. Once a final decision is received from TDLC and the other anti-trust authorities TAM and LAN can finally proceed with shareholder meetings, final exchange offers between the two companies and closing the transaction. It is hard to predict exactly when the transaction will close but 1Q2012 appears to be a likely outcome, allowing the two airline groups to begin the roughly two-year integration phase.

LAN-TAM merger status and next steps 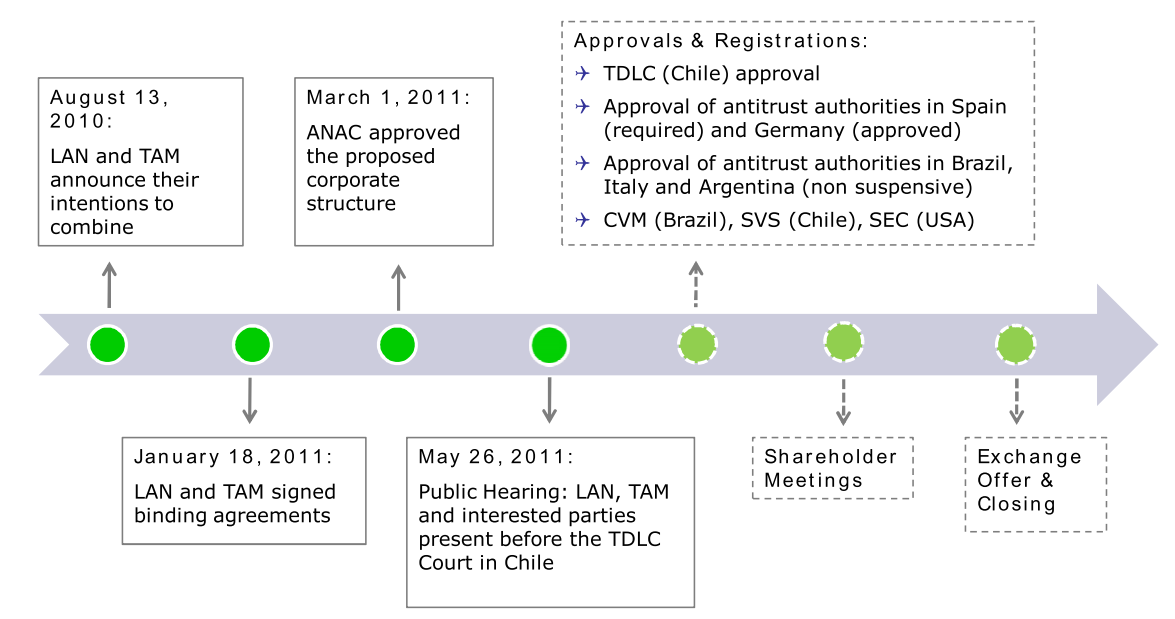 LAN and TAM are already the two largest airline groups in Latin America. Their merger would create a leading airline group from a global perspective and better position the two companies for tapping into the rapid growth expected for the region.

While LAN’s 2Q2011 results were relatively weak given the group’s typically stellar financial performance, LAN said “the operating results during the quarter evidenced ample growth opportunities in both cargo and passenger markets, enhancing the company’s leadership position in Latin America and reflecting its ability to face and mitigate impacts of adverse scenarios such as fuel price volatility. Based on LAN’s diversified, solid and flexible business model, as well as the company’s consistent track record and solid balance sheet, LAN is continuously improving the company’s long-term strategic position by addressing opportunities, strengthening its market presence and increasing competiveness.”