LAN is cutting capacity in its original home market of Chile as part of a move by parent LATAM to reduce domestic operations in most of its markets. The cuts are in response to slower economic growth and the devaluation of several South American currencies.

Chile has been one of the world’s fastest growing domestic markets, recording high double digit growth in 2010 through 2013. Growth has slowed significantly in recent months and could be flat or even negative in 2H2014 as LAN cuts capacity.

The upcoming FIFA World Cup is also driving further capacity cuts in Brazil as LATAM subsidiary TAM prepares for a drop in traffic and revenues during the tournament. Unlike Chile, capacity in the Brazilian domestic market has already dropped, with ASKs down 3% in 2013 and up only 1% in the first four months of 2014.

LATAM Airlines Group, which was established in 2012 following the merger of LAN and TAM, currently operate domestic services in seven markets – Argentina, Brazil, Chile, Colombia, Ecuador, Paraguay and Peru. Domestic operations account for about 80% of the group’s passenger traffic and almost 50% of its RPKs, based on data for the first four moths of 2014.

The Brazilian domestic market alone accounted for 50% of LATAM’s passenger traffic in the first four months of 2014 and 32% of the group’s system-wide RPKs. Brazil is the fourth largest domestic market in the world and by far the largest in South America.

LATAM cuts capacity in every domestic market except Peru

LATAM CEO Enrique Cueto told CAPA on the sidelines of the 2-Jun-2014 IATA annual general meeting in Doha that the group is adjusting its domestic capacity in response to weaker demand and the devaluation of local currencies. He says the group is now only planning to grow domestic capacity in Peru. The most recent adjustments have been made in Chile and Argentina while in Brazil a further capacity cut is planned from mid-June to mid-July during the FIFA World Cup.

According to CAPA and OAG data, LATAM domestic seat capacity for the week commencing 2-Jun-2014 is down by 1% year over year in Brazil, by 22% in Argentina, by 6% in Chile, by 5% in Colombia and by 24% in Ecuador. In Peru the group’s domestic seat capacity is currently up 5% compared to this time last year while in Paraguay capacity is relatively flat. Chile is LATAM’s second largest domestic market based on current seats, followed by Peru, Colombia, Argentina, Ecuador and Paraguay.

For 1Q2014 LATAM reported a 3.5% reduction in ASKs in the domestic Brazilian market and a 5.4% increase in ASKs in its Spanish-speaking domestic markets. (The Spanish-speaking markets include Argentina, Chile, Colombia, Ecuador and Peru; Paraguay is excluded in these figures but this is not significant as LATAM currently only operates one domestic route in Paraguay). International ASKs were down 7.6% in 1Q2014 as system-wide capacity was cut by 4.3% compared to 1Q2013.

But in Apr-2014 domestic ASKs in LATAM’s Spanish speaking domestic markets were flat, providing an initial indication of the adjustment made. Domestic ASKs in Brazil were down only 1% in April while international ASKs were down 4%.

RPKs were up across all three segments in Apr-2014 as LATAM was able to significantly improve its load factor. Some of the load factor improvement however is likely a result of the Easter holiday falling in April this year compared to March in 2013. 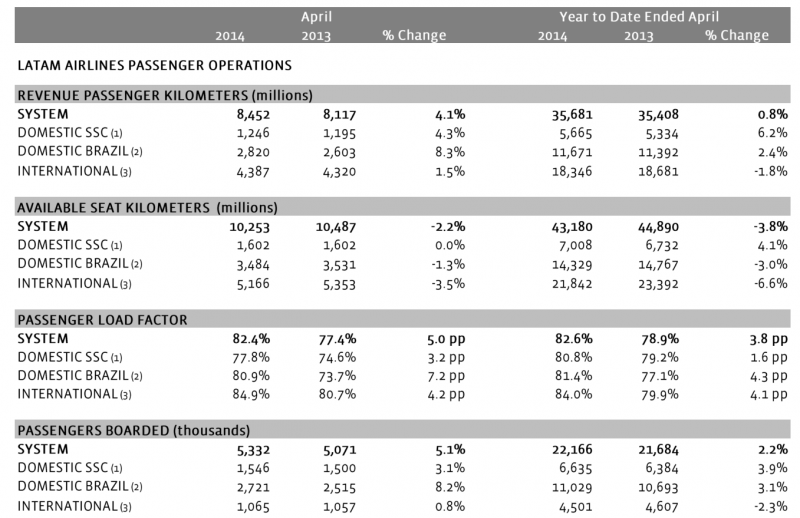 LATAM does not break down domestic traffic figures for its Spanish-speaking markets but some data is available on Chile, Colombia and Peru as these countries release passenger traffic data. Chile data is the most up to date, through Apr-2014, while Colombia hasn’t yet released data beyond Feb-2014 and Peru beyond Dec-2013. 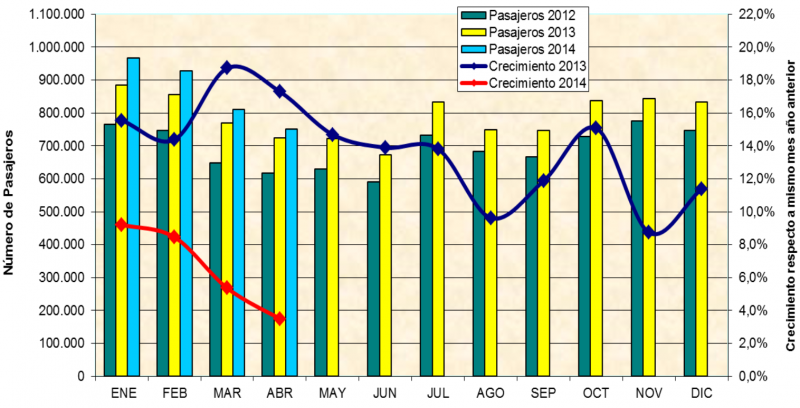 A slowdown is hardly surprising given Chile’s domestic market has nearly doubled in size over the past four years. There were 9.5 million domestic passengers in Chile in 2013 compared to only 5.1 million in 2009. The 14% to 19% annual growth rates recorded from 2010 to 2013 made Chile one of the world’s fastest growing domestic markets.

Such a high growth rate was unlikely to be sustainable given that Chile is a relatively mature market with the highest propensity for air travel in South America. Chile’s economy also has slowed, with its GDP projected to grow by 3.6% in 2014 compared to 4.2% in 2013 and over 5% in 2010, 2011 and 2012. 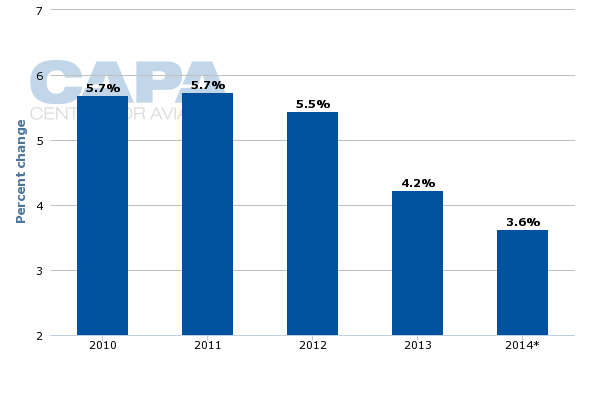 But most significantly, the Chilean peso has devaluated significantly and was down nearly 20% against the US dollar in 1Q2014 compared to 1Q2013. The devaluation has impacted LAN’s yields (in US dollar terms) and profitability as most of its costs are in US dollars. LATAM has been similarly impacted in Argentina, Colombia and Peru, where the local currency depreciated by about 50%, 12% and 9% respectively in 1Q2014.

Mr Cueto says weaker economic growth and currency devaluation have been the “two main issues” in Argentina and Chile. He says LAN is now planning domestic capacity in Chile to be down a couple of percentage points in 2014 compared to 2013 but points out this is a relatively small adjustment given the significant expansion from 2012 and 2013.

As LAN has a dominant position in the Chilean domestic market its decision to cut capacity will likely result in flat or even a small drop in year over year passenger figures in the coming months. For the full year the Chilean domestic market will still grow, driven primarily by the 8% growth recorded in 1Q2014 to 2.7 million passengers. But Chile's streak of four consecutive years of double digit domestic passenger growth will almost certainly end and even a high single digit figure for the full year is unlikely.

For the first four months of 2014 LAN domestic passenger traffic in Chile increased by 5% to 2.6 million. (These figures combine LAN’s two domestic brands, LAN Airlines and LAN Express – both of which operate under the same operating certificate and “LA” code.)

LAN domestic seat capacity was slightly higher in 1Q2014 and in Apr-2014 compared to the same periods of 2013, according to CAPA and OAG data. Capacity started to track down in the second half of May-2014 and is projected to continue to be down on a year over year basis for the remainder of 2014.

Current seat capacity for Chile’s second largest carrier, Sky Airline, is also down by 5% compared to the same period last year. Sky’s capacity is projected to be roughly flat or slightly down for the remainder of 2014. As a result LAN is unlikely to cede a significant amount of domestic market share beyond the 1ppt ceded in Apr-2014 compared to Apr-2013.

Three other smaller carriers account for the remaining 3% of Chile’s domestic market. The market is essentially a duopoly between LAN and Sky with LAN having a much larger share. Chile’s third largest carrier, PAL Airlines, was a more meaningful competitor on domestic trunk routes but has steadily cut capacity over the past few years. PAL captured only 1.1% of the Chilean domestic market in Apr-2014 compared to 3.3% in Apr-2013 as its traffic was down 63% to an insignificant 8,200 passengers.

LATAM's capacity cuts come at the expense of market share

The group continues to take delivery of new A320 family but is phasing out Boeing 737s and Bombardier Dash 8Q400s that were inherited when it acquired its subsidiary in Colombia. It also plans to phase out by 2016 A330s and A340s, which it inherited through its acquisition of TAM, leaving it with an all-Boeing widebody fleet consisting of 787s, 767s and 777s.

LATAM’s original capacity guidance for 2014 included a slight reduction in international capacity (2% or less), flat domestic capacity in Brazil and domestic growth of 5% to 7% growth in other domestic markets. But the latter will likely be adjusted downward given the recent changes in Chile and Argentina.

Brazil may also end up showing a slightly negative capacity figure for the year. Brazil domestic ASKs were down 3% in the first four months of 2014, giving TAM a 37.4% share of capacity compared to a 39.1% share in the first four months of 2013 as ASKs in the total market were up by 1%. TAM’s domestic ASKs for the current week are down by about 1% year over year and the carrier is planning a steeper reduction over the next month for the World Cup.

Mr Cueto expects a “dramatic reduction in domestic traffic” during the month-long tournament, which starts on 12-Jun-2014 and ends on 13-Jul-2014. Revenues will be down by an even bigger margin as there will be virtually no demand for business travel within Brazil during the World Cup.

International traffic will be also impacted as Mr Cueto says Brazilians are generally foregoing their normal (southern hemisphere) winter holidays and staying home for the World Cup instead of travelling. Typically a large number of Brazilians travel domestically or take holidays in Argentina, Chile, the US or Europe during this period.

TAM has adjusted its domestic schedule and operation to offer more flights between host cities before and after games. But Mr Cueto points out this type of traffic is entirely leisure and is unbalanced, leading to high load factors in one direction but very low load factors in the opposite direction. Overall he says capacity will be down significantly as the additional flights between host cities on peak days does not come close to offsetting the reduction in frequencies across most of TAM’s network in response to the reduced demand. According to CAPA and OAG data, TAM’s domestic seat capacity for the last two weeks of Jun-2014 will be down 28% compared to the same period of 2013.

LATAM is not providing guidance on the potential impact on revenues and profits but the group expects it will be significant. Operationally the group also expects challenges and a messy situation at some airports as the infrastructure struggles to cope with the surge in traffic on peak days.

Overall LATAM faces a challenging period as market conditions are not favourable in several of its key markets.

But, as market leader, the group is taking a sensibly cautious approach in reducing capacity, including domestically in Chile where the rapid growth rates recorded over the last few years simply cannot be sustained.