Growth in Chile’s domestic market slowed slightly in 2013 compared to previous years but was again in the double-digits at 14%. Traffic expansion on the country’s domestic routes remain among the fastest growing in Latin America as Chile’s economy has remained relatively stable during the last couple of years compared with more dramatic fluctuations within Mexico and Brazil.

The only legitimate challenger to LAN’s domineering position in Chile – Sky Airline – grew its positioning in the Chilean domestic market during 2013, and improved its load factor. But its loads remain well below the market average, which puts the privately-owned airline in a tough position to become a viable challenger for LAN.

The slowdown in Chile’s domestic growth in 2013 reflects the growing maturity of the market and the country’s relatively small domestic population of 18 million (versus 119 million in Mexico, 201 million in Brazil and 48 million in Colombia). Compared with other high-growth markets in Latin America, a larger number of Chile’s residents already travel by air, making it difficult to tap large numbers of first time flyers to stimulate the market.

Sky increased its domestic market share during 2013 by roughly two 3ppt as it increased its passenger levels by nearly 28% to 2.1 million. Small operator PAL kept its share flat at roughly 3%, but its passenger numbers dropped 7% year-on-year in 2013, reflecting its ongoing struggles to compete effectively in the market.

LAN Express’ share fell approximately 2ppt to 45% even as it grew its passengers by 8%. LAN’s share remained essentially flat year-on-year in 2013 at 29%, but it recorded 15% passenger growth to 2.8 million. The market share breakdown during 2013 reflects LAN’s strategy in recent years of pushing the main LAN brand within Chile as domestic expansion has grown rapidly.

For the full year 2013 Sky grew its load factor 1.7ppt to 66.9%, after posting declines in its loads during 1H2013 of 3.2ppt. But its loads still remain far below the average 76% in the domestic market, still well below its largest rivals.

Santiago remains Chile’s largest airport by a wide margin, with more than eight million domestic passengers travelling through the airport during 2013. With LAN commanding a 77% domestic seat share from the airport, and rich connecting opportunities, Sky faces a tough climb in creating a formidable challenge to LAN. 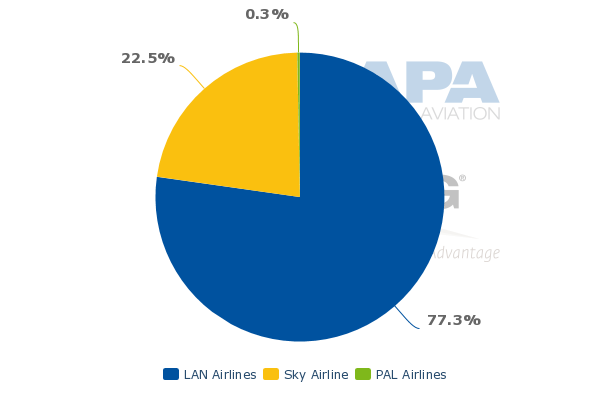 Santiago-Calama was the fasting growing market among Chile’s major domestic trunk routes in 2013, growing its passenger levels by nearly 35% to 1.4 million. Data from CAPA and OAG show that from the end of 2012 to the end of 2013 one-way seat deployment on the route grew by approximately 13,170 to roughly 13,909.

LAN’s seat share fell from 81% to 78% while Sky increased its share from 16% to 21% and PAL exited the market. The market was also Chile’s fastest growing trunk route in 2012, recording year-on-year growth of 48%. 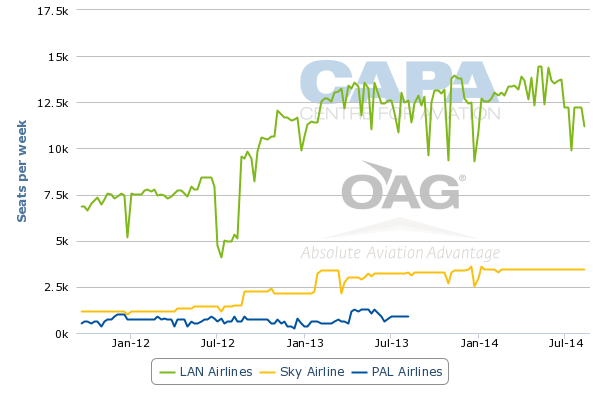 A major similarity between Chile and Peru is that on paper both countries seem ripe for LCC penetration given that each country is dominated by one full-service carrier. LAN Peru held a 64% market share in Peru’s domestic space in 2013 followed by TACA Peru (now rebranded as Avianca) with a 14% share.

It is a high-stakes gamble to compete with LAN in markets where it is the dominant carrier, which is likely why the low-cost model is absent from Chile and Peru with no visible signs of a low-cost entrant emerging any time in the near future. At one point the Viva Group has considered the Chilean market for a third Viva franchise after establishing carriers in Mexico and Colombia. But Viva is now focusing on Peru and Central America.

The Viva Group has yet to crystallise its plans for a potential new Peruvian low-cost carrier; but VivaColombia plans to launch new international destinations in 2014 including service from Bogota to Lima where it will compete with Avianca (both legacy Avianca and TACA Peru, which is also now braded Avianca) and LAN. Perhaps the Viva Group is waiting to examine the performance of injecting low-cost competition on that route before a full-scale move into Peru’s domestic market.

As previously reported by CAPA, LAN has the capacity to outmuscle a new low-cost competitor in Chile, its home market. LAN Express has a lower-cost structure and could be used to deter a low-cost carrier or other new entrant. Sky could be a potential takeover target, with Avianca the most likely suitor. But so far no Latin American airline group (full-service or low-cost) has made any serious moves to acquire Sky.

Chile’s international passenger levels slowed dramatically in 2013 to roughly 2% after 16% growth in 2012 and a 17% expansion in 2011. TAM was the fastest growing international carrier serving Chile during 2013, charting 59% growth year-on-year, reflecting continuing network synergies between LAN and TAM under the new LATAM operating structure. LAN and TAM completed their merger in mid-2012 but continue to work on exploiting synergies.

Sky grew its international passengers by 26% year-on-year in 2013, but still accounts for only 5% of Chile’s total international market. Its passenger levels from Santiago to Buenos Aires and Lima increased 44% and 33%, respectively.

Data from CAPA and OAG for the week of 24-Feb-2014 show that Sky increased its seat share in Buenos Aires from 10% to 14% year-on-year and in Lima from 5% to 11%. The growth is encouraging, but LAN remains dominant in those markets, and Sky’s scale of just 15 Airbus narrowbodies limits the breadth of what it can offer on some of Chile’s busiest international routes within South America. 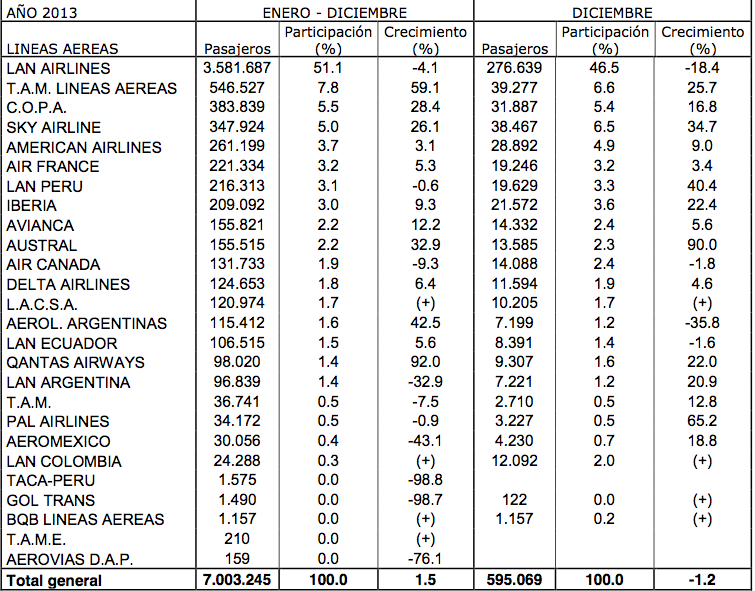 The explosive growth in Chile’s domestic market is likely to continue moderating, reaching a certain level of maturity over the next few years as its population growth is forecasted to remain relatively flat at 18 million. Chile’s geographical composition makes air travel the only viable method of transportation in many regions, the opportunities to migrate passengers from bus travel in Mexico and Brazil are not as ripe in Chile.

But its domestic growth is not likely to slow significantly although LAN and Sky seem to have achieved somewhat of a duopoly, albeit heavily weighted in LAN’s favour. In Jan-2014 domestic passenger traffic was again up 9%, according to the most recent data from Chile's JAC. International passenger traffic growth in Chile in Jan-2014 was again a modest 2%.

LAN has repeatedly maintained that it sees potential for continued rapid domestic growth in Chile. Chile’s projected GDP growth of 4.5% in 2014 is among the healthiest in South America and is higher than Mexico, Brazil, Argentina and Colombia. Peru is slightly higher.

The growth in Chile would be attractive to potential LCCs, which could stimulate even faster growth by lowering fares. But the prospect of competing with LAN in its home market will likely continue to scare away prospective LCCs. LAN almost certainly recognises that by continuing to grow domestically in Chile it makes it even harder for a new entrant.

With a relatively stable economy to support air travel, LAN will continue to be the biggest beneficiary of Chile’s strong domestic growth. Chile has opened its domestic market to foreign carriers, permitting cabotage and encouraging competition.

But so far there has been no emergence of a brash new entrant that dares to challenge one of Latin America’s strongest airline groups on its home turf.