The trans-Pacific market between Asia and North America has been experiencing a growth surge, with available seats growing about 10% in each 2014 and 2015 after years of limited growth. This has been accompanied by yield pressure, but most airlines appear willing to sacrifice performance for a long-term shot at market share.

This is not the case at Korean Air, which has typically been the largest Asian carrier across the Pacific and second overall only to United. In 2015, Cathay Pacific and Delta will surpass it. Korean Air, having already built up scale, is now focussing on financial performance instead of capacity growth. Korean Air VP Americas John Jackson, speaking at CAPA’s Americas Aviation Summit in Las Vegas, says that with 13 destinations in North America, Korean Air is not looking immediately to add new points but will selectively add frequencies over time.

Not all services will be made daily and Korean Air does not plan a hyper-frequency approach of multiple 777 flights a day; instead it offers double daily A380 flights to Los Angeles and New York and will soon add 747-8s and 787-9s to its fleet. About 50% of Korean Air's North American passengers transfer beyond Seoul. China is the large opportunity followed by core Southeast Asian markets like Thailand, Singapore and Vietnam and then smaller "boutique" markets like Cambodia and Myanmar .

Korean Air’s North American network remains the same size as in 2012. All other top 10 carriers have grown

For most of the past decade Korean Air was the largest Asian carrier between Asia and North America and second only to United in terms of seats on offer. However in 2015 a growing Cathay Pacific will overtake Korean Air while Delta continues a recent trend of outpacing Korean Air.

Using 2012 as a base level, the ten largest trans-Pacific carriers in 2015 have all grown since 2012 with the exception of Korean Air. 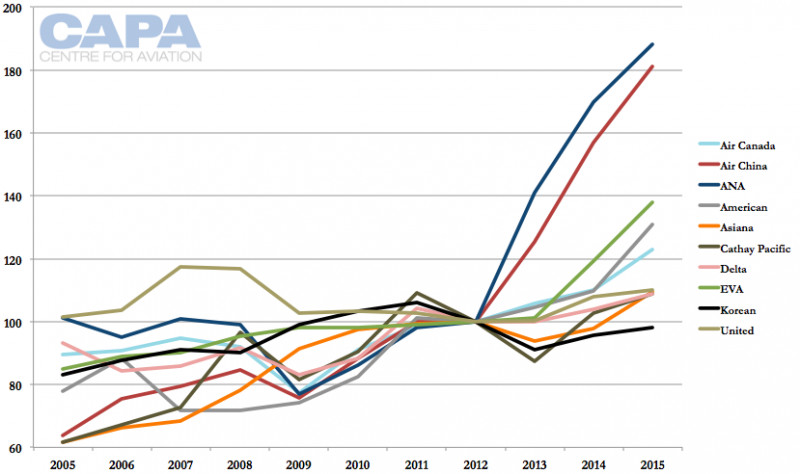 Korean Air is forecast to be only the fourth largest carrier across the Pacific in 2015, according to OAG data. United has a clear foothold as the largest carrier while Delta, Cathay and Korean Air are relatively close to each other, with Delta (second-largest) being about 10% larger than Korean Air. 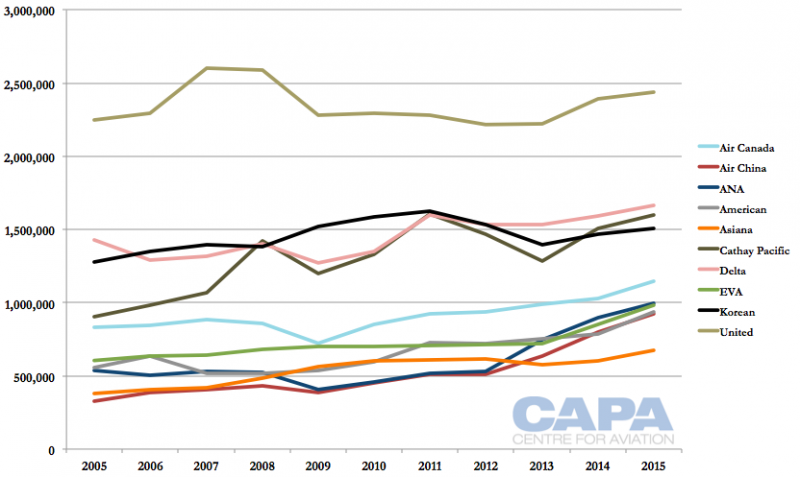 There is some distance in between Korean Air and the fifth largest carrier, Air Canada. Korean Air’s trans-Pacific seat capacity is about one-third larger than Air Canada. Air Canada is ahead of four carriers – ANA, EVA, American and Air China – with a relatively similar amount of capacity in 2015. Asiana, Korean Air’s local competitor, is a distant 10 largest.

Delta Air Lines in 2015 is adding a new daily Shanghai-Los Angeles service but expects to downgauge other services. Cathay Pacific can be expected to add further North American capacity (with 2016 to see a full-year realisation of additions in 2015, such as Hong Kong-Boston). Air Canada is conservative with Pacific growth while EVA Air and Air China plan significant growth.

JAL (11th largest) will be more free to grow in 2017 due to regulatory circumstances while China Eastern (12th largest) will likely enter the top 10 ranking in the medium-term. China Southern (15th largest) and Hainan (17th largest) could also do so in the medium/long-term as the focus continues to shift to China and those carriers receive more long-haul aircraft.

Growth is on the cards for Korean Air, but selectively, Mr Jackson tells CAPA at its recent Americas Aviation Summit in Las Vegas. Korean Air has the largest network of destinations, serving 13 points in North America. This is more than any other Asian carrier and more than the number of points any North American carrier serves in Asia. Additional points in the medium-term are unlikely, Mr Jackson says: "We''re present in every place we want to be."

About 50% of Korean Air’s traffic connects beyond Seoul. China is the key beyond market

The share of Korean Air’s North American traffic connecting beyond Seoul has varied in recent times and has been as high as 70%, but currently stands around 50%, according to Mr Jackson. With the exception of Tokyo Narita-Honolulu, all of Korean Air’s long-haul North American flights are to Seoul Incheon, which across all airlines saw 15.9% of passengers connect in 2014.

The cultural interest in Korea – the "Korean Wave" – has made Korea as a destination very popular, with supportive yields. At the same time, connecting markets beyond have become very competitive as new trans-Pacific capacity has been added.

Seoul Incheon transit passenger volumes declined in 2014 from 7.7 million to 7.2 million, leading to a drop in the share of transit traffic from 18.5 to 15.9% in 2014. Overall, Incheon performs exceptionally well, but nonetheless the airport is concerned about decreasing transit traffic. Incheon is looking at initiatives with other airlines, although Mr Jackson says Korean Air is necessarily not explicitly focused on boosting North American transit traffic to aid Incheon. For beyond traffic on trans-Pacific routes, Korean Air sees three opportunities. First is the obvious pick: China. Seoul Incheon has a geographic advantage being almost on the flight path of North America-China routings.

Of non-mainland Chinese, Korean Air’s China network is the largest in terms of destinations, serving 25 cities in mainland China (Asiana serves 24 while Dragonair serves 20). Mr Jackson observes North American carriers focus on two Chinese cities but “we’ve got all the cities behind Shanghai and Beijing”.

Incheon Airport and Korea overall is an attractive transfer point

Tokyo has similar geography to Seoul, but ANA and JAL have cost bases too high to support large China networks that can feed long-haul flights. Hong Kong’s Cathay Pacific (and in the medium-term Hong Kong Airlines) have more favourable cost bases but, being at the southern tip of China, require backtracking on China-North America routes.

Unlike Beijing, Hong Kong, Shanghai and at times Tokyo, Incheon has had infrastructure available to support growth. The airport’s duty free collection is especially popular with Chinese passengers. 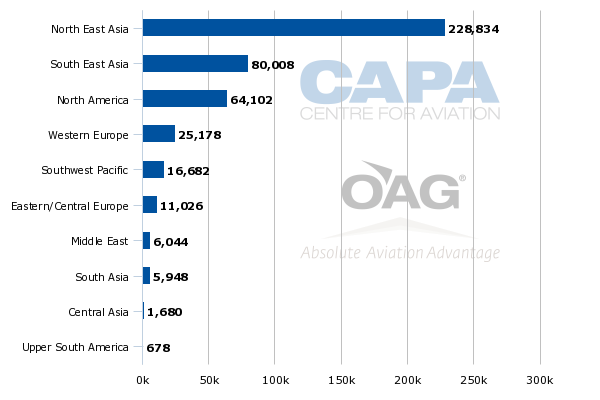 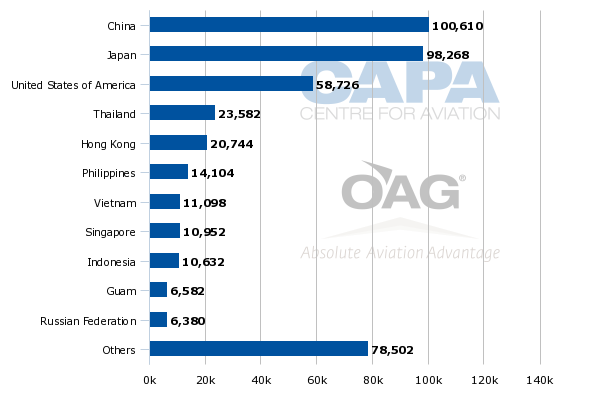 The third and last opportunity is in the "boutique" markets like Myanmar and Cambodia that help fill in the market. They are often leisure markets although there is increasing business traffic to Myanmar (from a low base).

There is much attention to the deployment of 787s on secondary trans-Pacific routes, from ANA’s Tokyo Narita-San Jose to United’s Chengdu-San Francisco. Korean Air has 11 787s on order (a single -8 variant and 10 -9 variants) for delivery from 2015, according to CAPA’s Fleet Database. While Mr Jackson did not say the exact routes the aircraft will serve, he told the CAPA Summit Korean Air’s 787-9 “is not for thin markets”.

Korean Air has filed with US regulators for the ability to serve the US with the 787-9. Korean Air has not publicly disclosed the aircraft's configuration.

More immediately on the fleet front, Korean Air is planning for the introduction of its 747-8 passenger version. Korean Air has 10 passenger 747-8s on order, supplementing an existing fleet of five in-service freighter 747-8s and two freighters on order.

Korean Air's older aircraft, like the 747-400 and 777-200ER, have a premium seat share (depending on the configuration) similar to the 747-8. Korean Air may look to deploy the 747-8 on more premium-light routes while reserving its flagship A380 for heavy trunk routes.

Part 2 of this report will be published for CAPA membership access: Delta Airlines is a challenging but potential JV partner. Pause on US-Latam growth

Part 2 of this report will continue its review of Korean Air's shift in its trans-Pacific business. Korean Air expects new premium products to further enhance its position. As part of its conservative growth, plans for a Los Angeles-Lima flight, with local pick-up rights, have been put on hold.

Korean Air's other mainland US fifth freedom flight, Los Angeles-Sao Paulo, is seeing over-capacity after American Airlines entered the market. Finally, Korean Air sees opportunities for a deep partnership and even joint-venture with Delta – if the hard bargainer comes to the table.