An agreement for Korea Airports Corporation to take up a concession to operate the coastal Manta Airport in Ecuador was all but finalised a few months ago when the country’s civil aviation authority suddenly stopped it. Now it seems to be back on again.

Not much has changed since then, apart from a big hike in seat capacity. There are only two airlines operating, both are in bankruptcy protection, and there are no LCCs.

Yet that should not be a problem for KAC, which has ample experience of handling what are fundamentally tourist-oriented airports back in Korea.

Korea Airports Corporation (KAC) stated in mid-Nov-2021 that it was in talks with Ecuador's Government to operate Manta Eloy Alfaro International Airport. The contract is estimated to be worth USD456.8 million and would run until 2051.

Previously CAPA articles and news items have detailed how KAC had intended to sign a KRW540 billion (USD482.3 million) contract to manage the airport in Jun-2021, before the project was declared void by the Ecuadorian civil aviation directorate, DGAC.

The Ecuadorian President, Lenin Moreno, had even confirmed an executive order to finalise the concession contract at the end of Jun-2021.

KAC will manage and operate Manta Airport (2021-2050) to include airport facilities if the new talks are successful.

According to local press reports in Korea, KAC has stated that it is “close to signing a business deal” with the Ecuadorian government to operate Manta Airport. A negotiation team is currently visiting Ecuador for talks to finalise the deal.

This one is estimated to be worth KRW40 billion (USD33.76 million), and would result in the corporation acquiring a 100% stake and, again, operating the airport until 2051.

Unless the figure has been misquoted, that would represent a huge downscaling of the size and scope of the deal compared to the other one. A misquote is more than likely.

A local corporation would be set up to manage and operate the airport’s facilities, including the passenger terminal and runway, and KAC would have the right to all profits generated over the next 30 years. The local corporation principle is similar to the one used by operators such as Fraport and AENA in Brazil.

Should the deal be signed and sealed this time, it would mark the 15th airport to be operated by KAC, which currently operates 14 airports, exclusively across Korea, and including Jeju, Seoul Gimpo and Gimhae airports; the second, third and fourth busiest in the country. 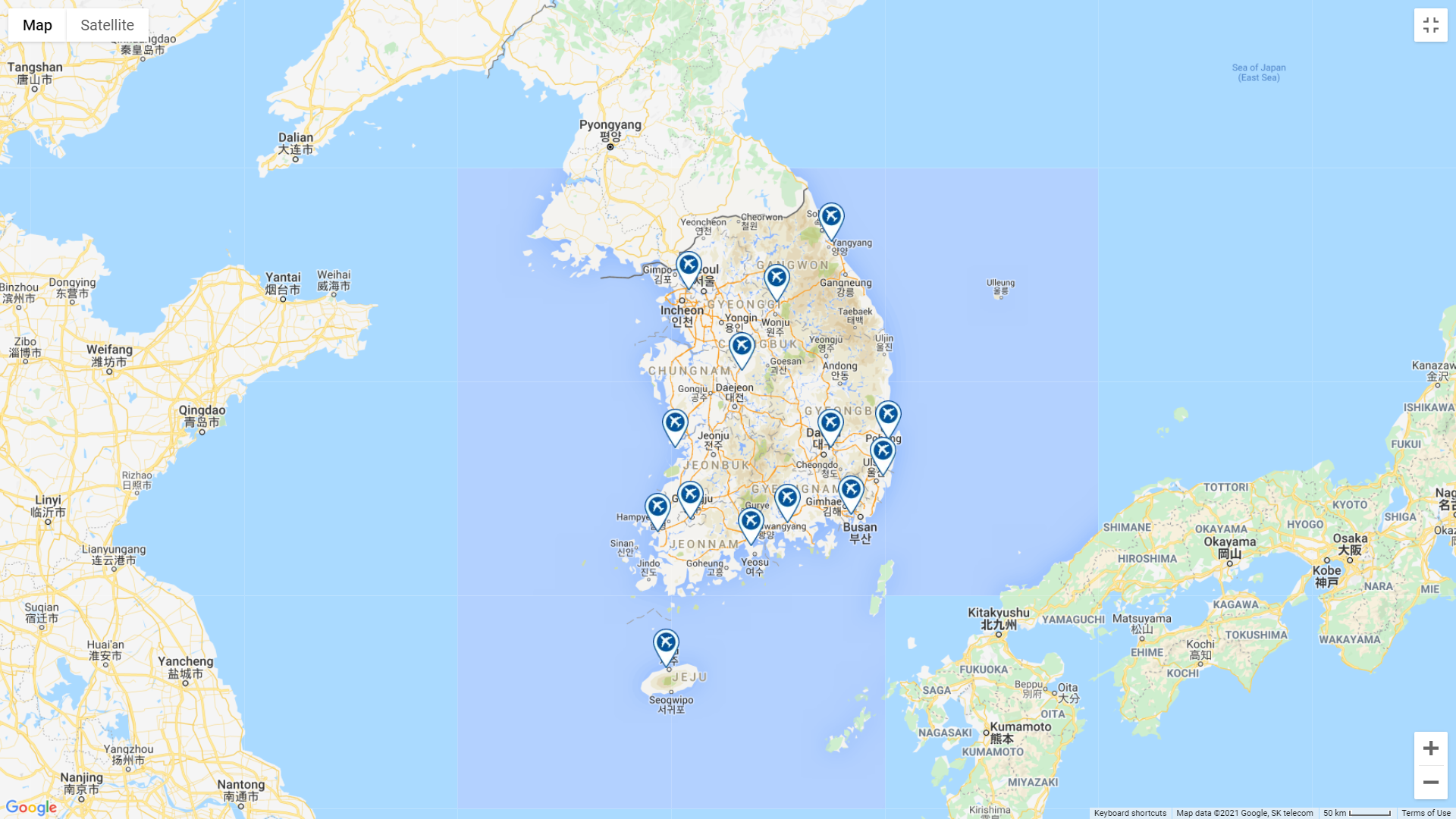 The talks initially began after the former South Korean Prime Minister Lee Nak-yon visited Ecuador and proposed the project to the government, rather than it being a direct initiative of KAC.

It is not clear at this moment if the initiative to restart talks came from either of the governments, from KAC, or from the DGAC.

Other Ecuadorian airports could be concessioned if this deal is successful

As the previous CAPA article pointed out, KAC has displayed an ambition to be an international airport operator for some time now, zeroing in on opportunities in Ecuador, where other airports could also be concessioned if the Manta deal was completed successfully.

On the other hand, it is not evident that there is much in the way of competition from other operators to manage Manta or other Ecuadorian airports, despite Manta in particular offering numerous attractions.

KAC also working with an airport in Laos

KAC has also expressed interest in an airport in Laos.

In May-2021, and with the Manta deal seemingly in place, KAC unexpectedly announced that Laos' Ministry of Planning and Investment had selected KAC to undertake a feasibility survey for the expansion and improvement of Luang Prabang Airport, which would be the first such project by any Korean firm in Laos.

Situated 300km north of the Laotian capital, Vientiane, in a rural province of north central Laos, and literally meaning "Royal Buddha Image", Luang Prabang was once the Royal Capital of the Kingdom of Laos (until 1975), and 33 of its 58 constituent villages together comprise the UNESCO ‘Luang Prabang World Heritage Site.’ It was listed in 1995 for unique and "remarkably" well preserved architectural, religious and cultural heritage.

Although the survey is only a feasibility study, the expectation must be that any contract for expansion and improvement would be offered to KAC as first option if the Laotian government is happy with the report.

Tourism is the driver, and KAC has plenty of experience at Jeju

The attraction in this instance (tourism) is evident. And that is probably the case with Manta, too.

KAC has the experience of operating Jeju Airport, the second busiest in Korea. Located on an island off the Korean Peninsula, Jeju has mild, warm weather during much of the year and is a well known resort, with prestigious hotels and public casino facilities. At one time the Seoul Gimpo-Jeju air route was the world's busiest passenger air route.

Indeed, it could be the award of the feasibility study in Laos which tipped the balance back in favour of KAC in Ecuador.

Manta is the tenth most populous city and the largest port city in Ecuador and is called the “tuna capital of the world” for its tuna catching and processing industries. It is also home to many of the biggest revenue-earning companies in Ecuador in a variety of industries (including hat manufacture), coming third behind Quito and Guayaquil in that respect.

But it is tourism where Manta has made its mark.

Cruise ships have made Manta a port of call while passing through the southern Pacific Ocean and the city is the closest of any to the Galapagos Islands (1000 km), which is another UNESCO World Heritage site.

That fact alone increases Manta’s importance both as a port of call for those cruise ships and as a meeting point on fly/cruise vacations. KAC’s experience at the island resort of Jeju would evidently add weight to its claims to manage Manta Airport.

Relationship of Manta/airport to the Galapagos Islands

It could also be anticipated that KAC would have the wherewithal to develop international as well as domestic tourism directly into Manta, as it does at Jeju.

An underserved segment of the tourism market may be windsurfing and kite surfing, for which the town is quickly developing a reputation.

Seat capacity has returned dramatically in the past few months

Another possible factor behind the original contract being annulled is the complete collapse of passenger seat capacity at Manta from May-2020 caused by the coronavirus pandemic, from which it had not even started to recover when the previous article was published.

KAC will be aware of how numerous organisations overpaid for concession status at the start of the Brazilian airport auctions when, or just before, Brazil became involved in a series of economic downturns.

In the last article it was reported that in the week commencing 17-May-2021 capacity was almost exactly the same as in the same week in 2020, and that the trend line in 2021 was stable, with some potential at least for an upturn.

And that is exactly what has happened. A capacity recovery began in earnest in Jul-2021, and in the week commencing 22-Nov-2021 that capacity has gained, to reach 81% of what it was in the same week of Nov-2019 – which will be of comfort to KAC.

The caveat is that the recovery is entirely in the domestic segment. There are no international services at all, which is the size of the task for KAC if and when this deal is complete. Almost all the capacity at Jeju is domestic at the moment, but that is on account of the pandemic.

Few airlines operating; the two that are, are in bankruptcy protection; no LCCs

Another problem is that there are only two airlines operating, Avianca and LATAM: both in Chapter 11 bankruptcy protection, and neither of them is an LCC. Tourist resorts typically benefit the most from LCCs, and at Jeju they account for 54% of capacity.

That should be a target figure for KAC at Manta and it is not unachievable. In Upper South America as a whole ‘within’ the region LCC seats account for more than 20% of the total, and that proportion is growing steadily. 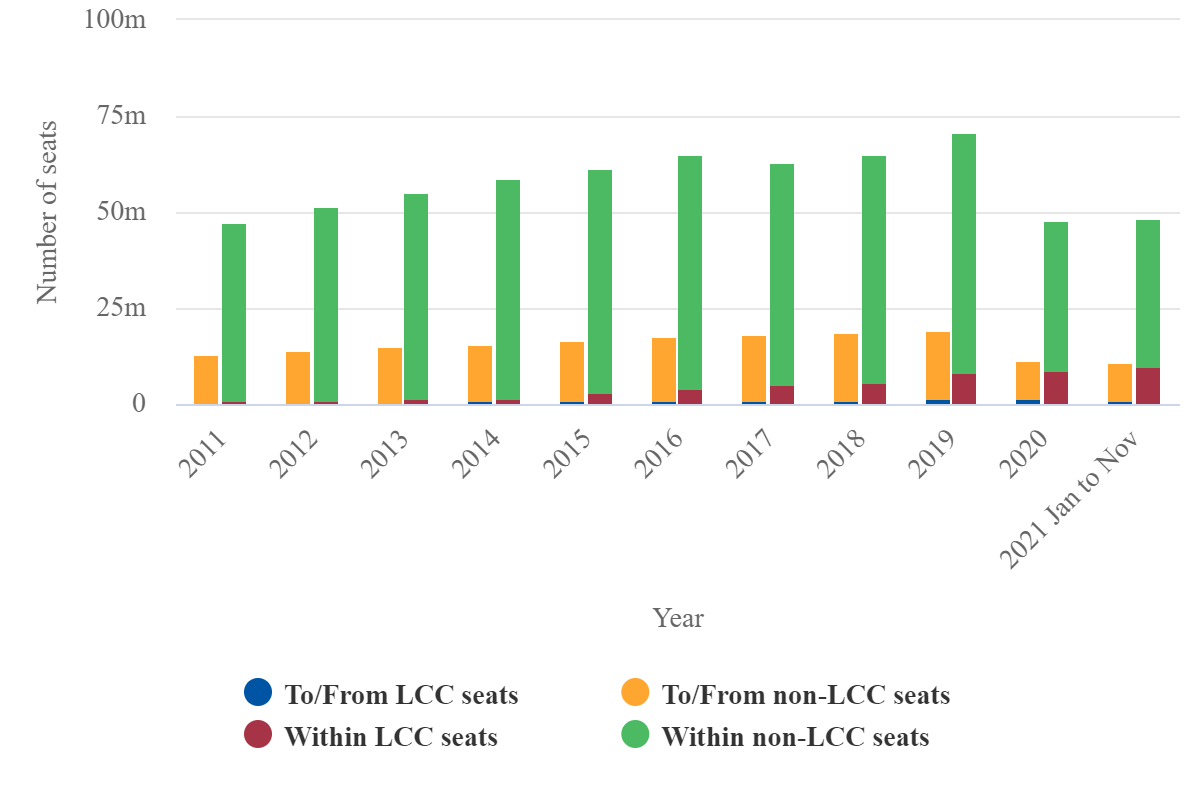 Apart from the similarity of Manta to at least one of the airports that KAC operates at home, political interference, and the fact that there are previous-generation(s) of Koreans living across South America, there may be other reasons that prompted KAC to chase down the Manta deal in the first place.

One is simply that it is a modern facility, rehabilitated recently by way of a new passenger terminal, ATC tower and enhanced parking. There is little to do to it in the immediate future.

Another one that springs to mind is the continuing success that Incheon International Airport Corporation (IIAC), which operates Seoul Incheon Airport, has had internationally with its investments.

IIAC is not active at all in Latin America; its focus is on Asia (east Russia, Indonesia), the Middle East (Kuwait, where it operates a terminal under a very short concession) and Europe, where it has a strategic advisor role for a new airport in Poland and bid for the Montenegro airports. It also has a co-operation agreement with Airports Corporation of Vietnam and could possibly fill the role of strategic partner there following the breakdown in 2017 of an agreement with Groupe ADP to do the same.

It is also a bidder in the suspended Bridgetown (Barbados) Grantley Adams airport PPP as a prequalified bidder, but there is no indication that any part of the Americas is within its sights.

That leaves the field there open to KAC to pursue if and when the Manta deal is concluded and it can build up a reputation in the area as an operator.

There are still opportunities remaining in Brazil, some of them announced only this week in the Amazonas province.

Latin America historically offers plenty of opportunities to investors in all sizes of airport, but mainly small and medium sized ones, and another outcome of the deal could be renewed enthusiasm for the region from other operators outside the South American continent.