JetBlue keeps focus on Florida and Caribbean with new routes as it plans up to 8.5% growth in 2012

JetBlue’s plan to grow its capacity on the high side for the US industry by 6.5% to 8.5% in 2012 is reflected in a planned roll-out of new destinations to the Caribbean, Florida and Latin America during 4Q2012. Those regions, particularly the Caribbean and Latin America, are the primary growth vehicles for the carrier as some other US airlines retrench in those areas. The airline’s new Florida markets build on JetBlue’s strong brand awareness in the region as the airline expands into Florida from the less dense market of Providence, Rhode Island.

Executives at JetBlue recently stated the carrier continues to grow profitably in the Caribbean and Latin America, with those regions representing 10% of the 7% to 9% capacity growth the carrier expects to record during 3Q2012. The airline’s other major growth market, Boston, is accounting for about 7% of the 3Q2012 capacity growth.

Grand Cayman is a logical market for JetBlue as the carrier touches most of the major markets in the region. By year-end 2012 the carrier’s Caribbean and Latin America will encompass service to Aruba, The Bahamas, Barbados, Bermuda, Cayman Islands, Colombia, Costa Rica, Dominican Republic, Jamaica, Puerto Rico (where JetBlue has a focus city in San Juan), St Croix, St Lucia, St Maarten, St Thomas and Turks and Caicos.

The US Department of State estimates tourism represents 30%-40% of GDP in the Cayman Islands, and no US carrier offers direct flights to Grand Cayman from either JFK or Boston. Cayman Airways operates flights from JFK to Grand Cayman. JetBlue should not have challenges in building maturity in the new markets to Grand Cayman as its footprint to the Caribbean from both JFK and Boston is robust, and promoting flights to another Caribbean destination will not pose a challenge for the carrier.

The new flights to Grand Cayman from Boston are once-weekly on Saturdays, so the resources necessary for JetBlue to start-up the market are minimal. JetBlue will operate three weekly flights from JFK to Grand Cayman. Schedules in Innovata show that for the week of 11-Nov-2012 through 17-Nov-2012 JetBlue’s 450 seats will represent 65% of the weekly capacity in the market while Cayman Airways’ 244 seats will account for the remaining 35% share. Starting in mid-Dec 2012 as part of the high season Cayman's 488 weekly seats will clip the 450 offered by JetBlue. 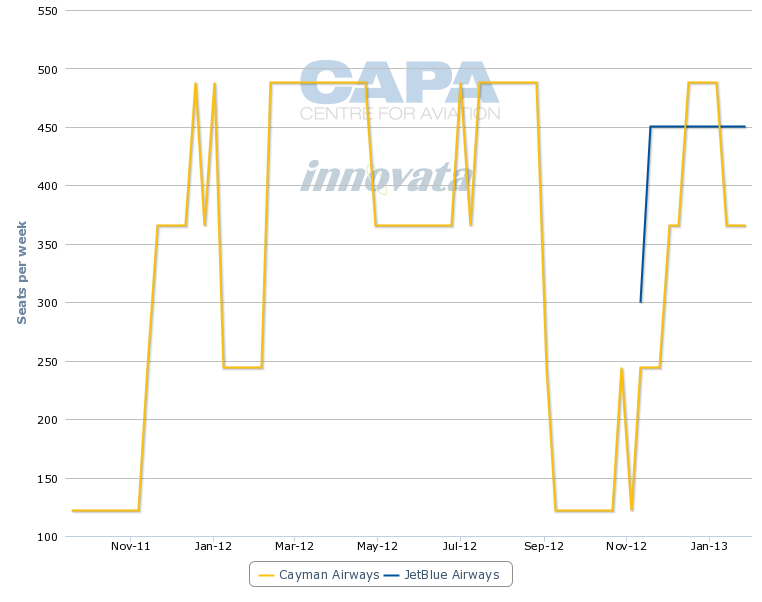 Joining JetBlue’s new service to Grand Cayman in Nov-2012 are two new weekly fights from New York JFK to Samana, Dominican Republic, which will become the carrier’s sixth destination in the country.

JetBlue inaugurated service to the Dominican Republic in 2004 with flights to the country’s capital Santo Domingo and Santiago. Since that time the airline has added service to La Romana, Punta Cana and Puerto Plata. 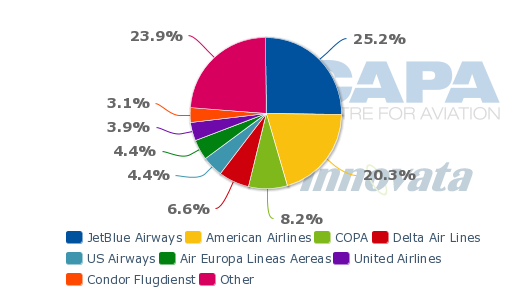 JetBlue serves all of its markets in the Dominican Republic from JFK, and also offers flights from its Boston focus city to Punta Cana, Santo Domingo and Santiago. JetBlue competes with both American and Delta on its flights from JFK to Punta Cana, Santiago, and Santo Domingo. But in all three markets JetBlue offers far more weekly seats than its legacy competitors, holding more than 60% of the weekly seat share in all of the route pairings. United also serves Santo Domingo and Puerto Plata from its hub at Newark Liberty International Airport, but does not match JetBlue’s seating capacity in either market.

On flights from Fort Lauderdale to Santo Domingo JetBlue competes directly with fellow low-fare carrier Spirit Airlines, but JetBlue is the dominant carrier in the market in terms of seat share, accounting for 64% of the weekly seat share. 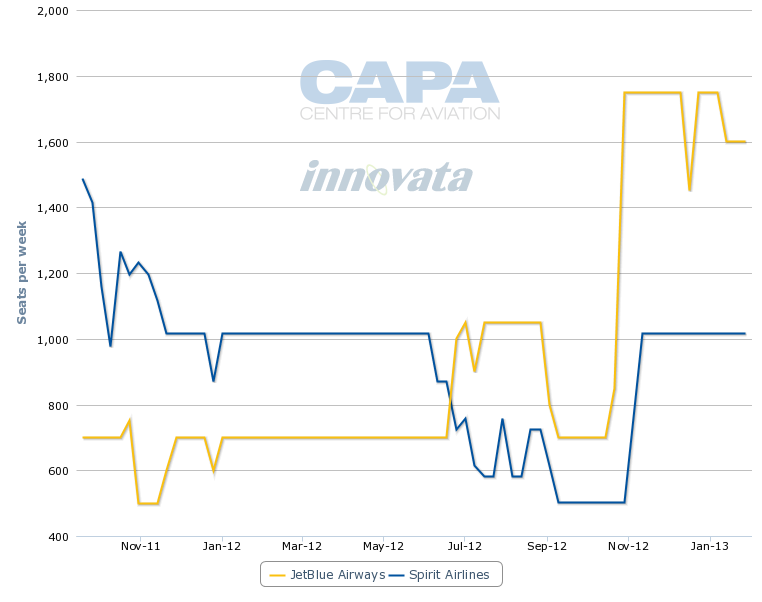 After it launches flights to Samana, JetBlue will be the only US carrier serving the city, which lies on the eastern coast of the Dominican Republic. The carrier characterises Samana as an up-and-coming tourist destination. Both of Canada’s major carriers offer service to Samana with WestJet operating one weekly flight from Toronto and Air Canada offering a single weekly flight from Montreal.

JetBlue has been eying growth in the Colombian market since it launched flights to the country in 2009 with service from Orlando to Bogota. It expanded flights to Colombia in May-2012 with a Fort Lauderdale-Bogota pairing. During Nov-2012 the carrier is launching three new weekly flights from JFK to the coastal city of Cartagena.

The carrier has had ambitions to expand into Colombia after it enjoyed load factors on its Orlando-Bogota flights of approximately 89% during 2011 and about 80% for 1Q2012. JetBlue’s management recently declared Colombia “has been really good for our airline”.

With the launch of flights from New York to Cartagena, JetBlue is expanding its Colombian footprint beyond its Florida-Colombia offerings. Although Florida has a larger number of hispanics of Colombian origin, New York’s Colombians account for about 5% of the region’s hispanic population. Cartagena’s popularity as a tourist destination is also growing as it is situated in the northern part of the country on the Caribbean sea.

Spirit Airlines is currently the only other US carrier serving Cartagena, typically offering four weekly flights from its Fort Lauderdale base. Colombian flag carrier Avianca operates flights from Miami to Cartagena. Its service offering from JFK includes flights from Bogota and Medellin.

JetBlue may have opted to test out the Cartagena market on a route where it would be uncontested, and could likely add more US routes to Cartagena if the market proves to be successful. Flights from southern Florida to Cartagena could become a possibility as JetBlue has not shied away from competing with Avianca and Spirit in both its routes from Orlando and Fort Lauderdale to Bogota.

JetBlue is rounding out its 4Q2012 service expansion with the launch of flights in Nov-2012 from Providence, Rhode Island to staples in its Florida network: Fort Lauderdale and Orlando. The move further bolsters JetBlue’s strength in the US northeast-Florida corridor, which has been one of the carrier’s areas of strength since its launch in 2000. About one-third of the carrier’s capacity is dedicated to markets from the northeast to Florida. JetBlue also serves Fort Lauderdale and Orlando from its Boston focus city, which is 80km north of Providence.

Southwest Airlines has long been the dominant carrier at Providence TF Green International Airport, which the carrier served before launching flights from Boston in Aug-2009. Southwest accounts for 48% of the weekly seating capacity at Providence. But traffic growth at the airport has remained stagnant during the last couple of years as passenger numbers fell to 3.9 million in 2010 and remained at those levels in 2011 from a total of 4.3 million recorded in 2009. During 2Q2012, passenger traffic at Providence dropped 6% year-over-year in Apr-2012, 10% in May-2012 and 7.4% in Jun-2012. 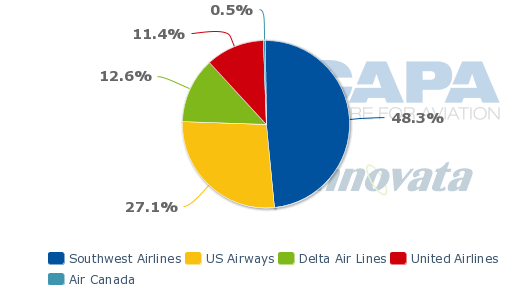 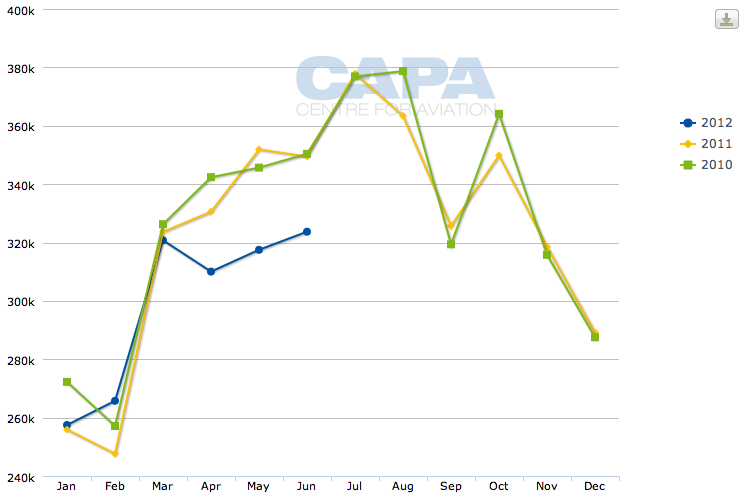 JetBlue is competing with Southwest in both of its new markets from Providence, adding ample capacity on each pairing, and challenging the incumbent’s monopoly position on the routes. Schedules in the Innovata database show that for the week of 02-Dec-2012 to 08-Dec-2012 JetBlue is operating about 1050 weekly one-way seats in the Providence-Fort Lauderdale market, which will account for a 49% share. During the same time period the carrier is operating approximately 2100 seats from Providence to Orlando, which will account for a 35% share. 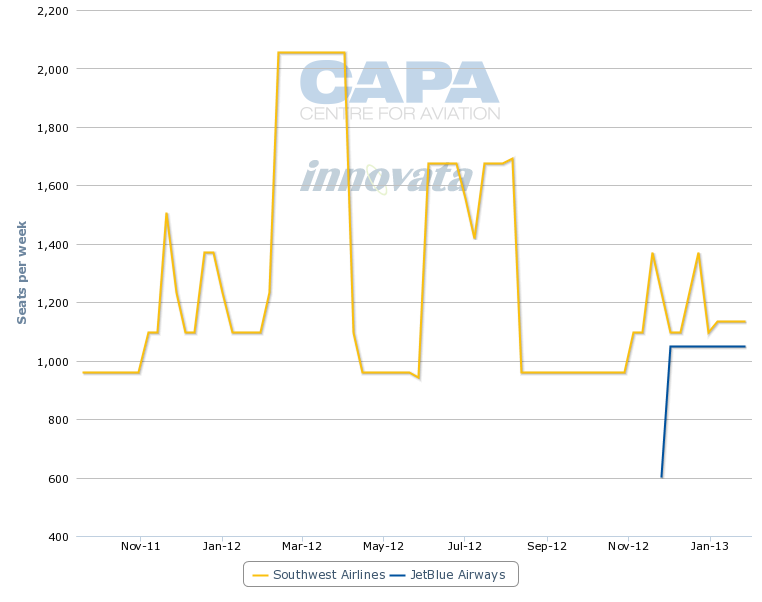 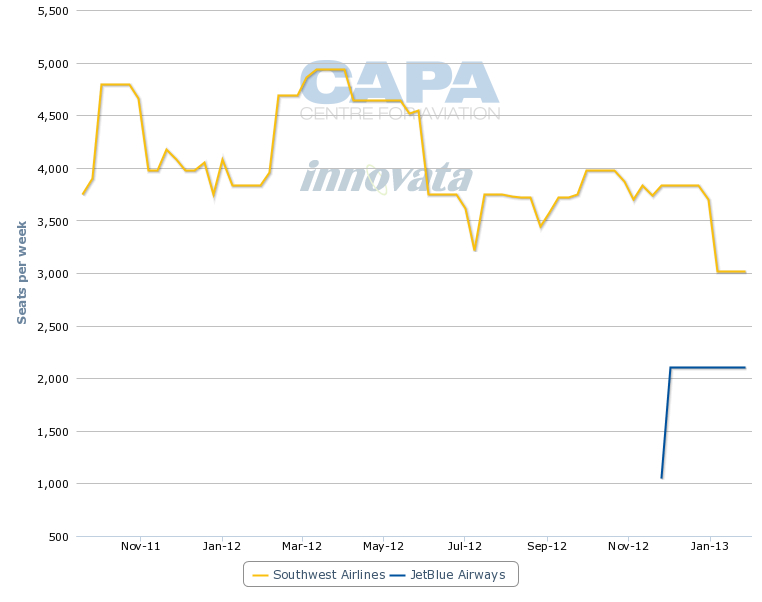 It is likely JetBlue could expand from Providence into additional markets in Florida if the first two perform well. Service to Tampa is not unfeasible as it currently serves Tampa from Boston.

With Southwest and JetBlue emerging as two of the largest US low-fare carriers after rounds of consolidation in the country during the last decade, it is likely the competition between the two carriers will intensify. Meanwhile smaller LCCs Spirit, Frontier and Allegiant will look to make some markets work that are no longer viable for Southwest and JetBlue as their networks become more complex.

JetBlue’s latest additions to its route network show the carrier’s belief that the Caribbean and Latin America are prime targets for expansion. Recently JetBlue chief commercial officer Robin Hayes assured that as the carrier approaches 2013 there will be “no suprises”. JetBlue’s network expansion over the next several months will be much the same as it has been during the last few years: a continuing push internationally into the Caribbean and Latin America along with growth from Boston.