In our continuing series, which examines the most robust routes between various global geographies using CAPA’s Route Analyser Tool, we will look at India in a more comprehensive way, showing that regulatory policy in India has actually moved its hubs to the Gulf states, primarily Dubai.

While there are a few additional Europe-South Asia routes (i.e. Pakistan, Sri Lanka) that meet the selected criteria, they have been eliminated from the analysis. What is left is a pattern that has two significant offers, between London and India’s two primary cities, followed by a robust, but much smaller offer, primarily originating in Germany. Following this, every service is essentially a single daily flight, most to either Delhi or Mumbai.

For a nation with many cities boasting a population in the millions, only six have non-stop connections to Europe.

Relatively limited connections – and variety – to Asia as well

Even more striking is the paucity of service between India and other expanding markets in Asia. On assessment of the top routes, it is evident there are even fewer Indian destinations, with Kolkata not represented.

The seat offer between Bangkok and Delhi would rank 12th, and between Hong Kong and Delhi would rank 21st, in comparison with routes between Southeast and North Asia. For a geography that is leading the world in growth and expansion, Indian routes are clearly not playing in the same league.

A decade of some progress, but lagging by comparison

But there has actually been significant progress. While seat counts a decade ago are difficult to retrieve, frequencies are not. The following graphs display the increase in frequencies on top 2011 routes in the 10 years since 2001. 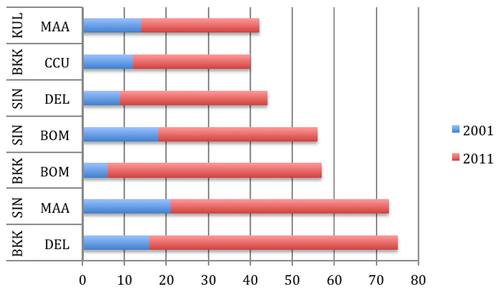 In terms of percentages, routes to India have shown greater increase but from a smaller base. The frequency increase between Bangkok and Delhi is about 360% over the decade. But even at the 2011 levels, the route continues to be operated less often than others in the region.

"Find a need and fill it"

No place on earth has shown such devotion to this business adage like Dubai. There we have observed spectacular growth to India, not only in numbers of seats but also in destinations served. Unfortunately for India, the connecting point lies outside its borders.

The seat offers from Dubai to Delhi and Mumbai each exceed the seats available between India and any other global point, including London, and there are 10 Indian destinations served directly from Dubai. A similar, but less imposing network is also available from Abu Dhabi on Emirates or from Doha on Qatar. Not only is there frequency, but also a wider choice of departure times for travellers.

And to some Indian cities, like Thiruvananthapuram, they are virtually the only practical option. A passenger from New York could connect twice via Europe and India or make a single connection at Dubai. Plus, 35 of the 65 other international frequencies are operated by airlines also based in the Gulf – Air Arabia and Oman Air.

India is perhaps most challenged from within

India continues to be a late bloomer, with much of that tardiness doubtlessly attributable to the regulatory environment which, after opening up rapidly between 2004 and 2008, is now once again limiting access in order to protect Air India. India’s carriers have steadily increased their share of international traffic since 2004, but they have largely expanded on routes with existing service rather than extending their network to new markets. All but one of the European services to cities other than Mumbai and Delhi are operated by non-Indian airlines and while Indian carriers compete on many of the Gulf sectors, they are, for lack of a broader network, generally limited to origin and destination traffic.

LCCs might have pursued more innovative route development strategies but until recently most have been prevented from operating overseas due to a regulation which first requires them to complete five years of domestic service. And now that strong carriers such as IndiGo have completed this qualification period, they are facing difficulties in securing traffic rights.

A renewed focus on shielding Air India has resulted in a freeze on new bilaterals and a reluctance to grant traffic rights to private Indian carriers. Aside from the impact on trade and tourism, India’s airlines may, as a result, be forced to deploy aircraft earmarked for international services on domestic routes – the additional capacity could destablise an already weak domestic sector.

India’s international aviation market has great potential, supported by strong growth in disposable incomes that is driving outbound travel, increasing international trade and investment, and a wealth of attractions that should generate far more foreign tourist arrivals than the 5.6 million visitors recorded in 2010. But maximising this potential will require a much more holistic approach than one focussed on protecting the national carrier.