Tigerair Mandala has announced the launch of services to Hong Kong from Bali and Surabaya from Dec-2013, supplementing its relatively new Jakarta-Hong Kong route. Indonesia AirAsia is preparing to also launch Surabaya-Hong Kong service in 2014 and is looking at serving Hong Kong from Medan. 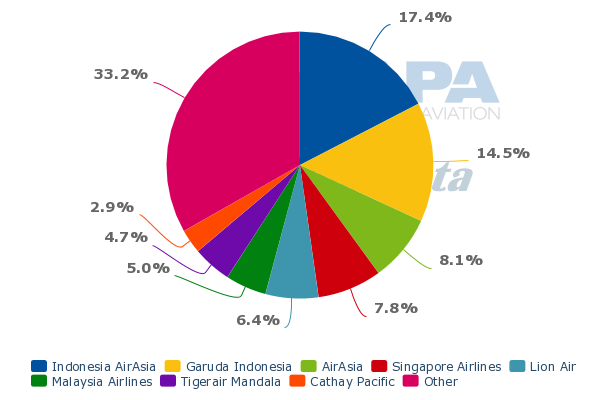 LCCs overall account for 45% of international capacity in Indonesia, marking it the second most penetrated international market in Southeast Asia after Malaysia. The 55% share from full-service carriers is led by Garuda Indonesia with less than 15% and Singapore Airlines with 8%. When including its regional subsidiary SilkAir, the SIA Group has a 10% share of the market – or just 4.3ppt below the flag carrier Garuda.

Nine of the 11 LCCs currently serving Indonesia’s international market are from the AirAsia, Lion, Tigerair or Jetstar groups. The only exceptions are Cebu Pacific from the Philippines and Mihin Lanka from the Sri Lanka, which each account for less than 0.5% of total international capacity in the Indonesian market.

The AirAsia Group currently has almost 200,000 weekly seats in the Indonesian international market compared to less than 90,000 weekly seats in the much bigger and more competitive domestic market. AirAsia currently only has about a 4% share of capacity in Indonesia’s domestic market. The group has repeatedly stated it is keen to become a more meaningful domestic player in Indonesia, which is by far the largest domestic market in AirAsia’s extended home market of ASEAN, and has made some progress over the last year by increasing domestic capacity by about 60%.

But Indonesia AirAsia is again focusing more on international expansion in 2H2013 as it adds another five A320s for a total of 29 aircraft. Almost all the capacity being added in 2H2013 is on international routes, including new services from Medan and Surabaya to Singapore and from Bali to Kota Kinabalu and Darwin (the latter is a resumption of a suspended route). The carrier also is adding capacity on several existing international routes.

Indonesia AirAsia is also planning more international than domestic expansion for 2014. The carrier says it plans to launch services from Surabaya to Ho Chi Minh and Hong Kong although has not yet set a launch date for either route.

Indonesia AirAsia also says it plans to launch services from Medan to greater China and India but has not yet decided on exact destinations or launch dates. Hong Kong and Macau are being considered from Medan along with potential destinations in southern India. Medan’s new international airport, which opened in Jul-2013, is particularly well positioned to attract Indonesia’s first non-stop route to India given its location in the western part of the country and its large Indian population.

Indonesia AirAsia reportedly is expected to receive eight more A320s in 2014, which would provide sufficient capacity to launch several new international routes. But its 2014 fleet plan has not yet been finalised as the AirAsia Group is still working on allocations for its affiliates.

Five of Indonesia AirAsia’s top 10 international routes are to Malaysia. Three are to Singapore, which currently accounts for nearly 20% of the carrier’s total capacity. 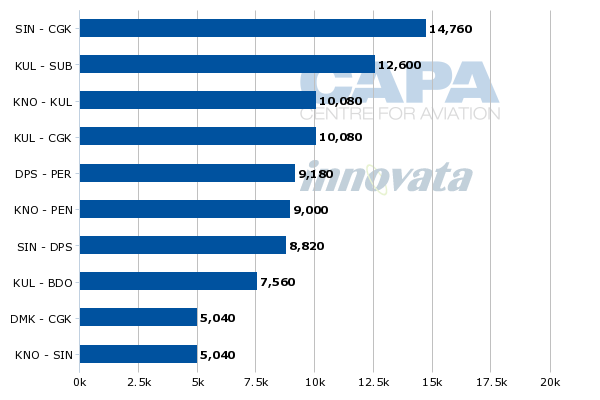 The Indonesia-Vietnam market is not currently served non-stop by any Indonesian carrier. Lion currently serves Ho Chi Minh from Jakarta but with a one-stop product via Singapore. Garuda dropped Vietnam from its network several years ago.

Indonesia AirAsia this time plans to serve Ho Chi Minh from Surabaya, a market which would presumably be even smaller than Jakarta-Ho Chi Minh. But the carrier has previously proven several times that new international routes from Indonesia can be viable by stimulating demand with low fares. 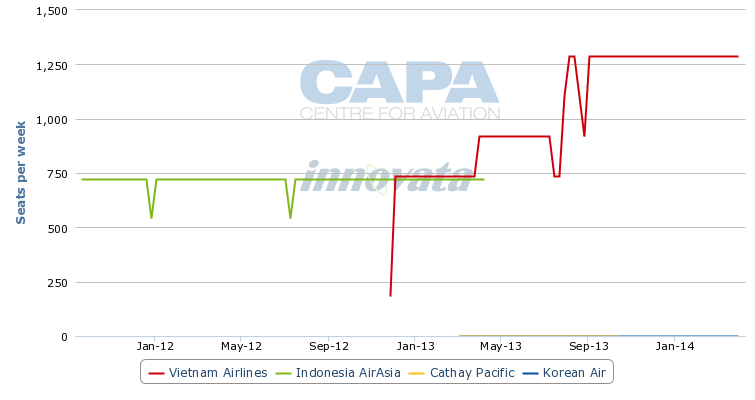 Indonesia-Hong Kong is a much bigger market that was not served by any LCC until Tigerair Mandala launched a daily service on the Jakarta-Hong Kong route in Jun-2013. Hong Kong is currently the fourth largest international market from Indonesia after Malaysia, Singapore and Australia – with about 46,500 weekly return seats, accounting for about 6% of total international capacity. 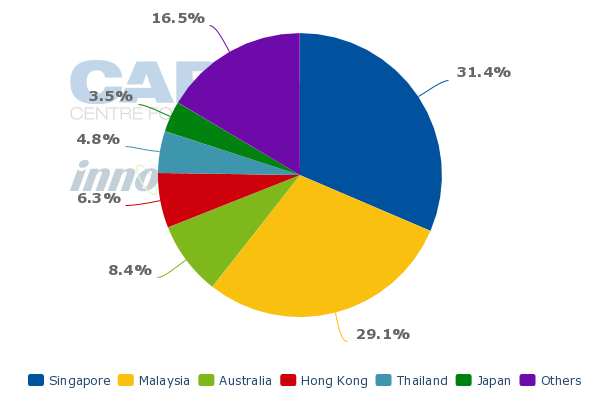 The Jakarta-Hong Kong route is also currently served with three daily flights from Cathay Pacific and two daily flights from Garuda. Taiwan’s China Airlines (CAL) also operates 12 weekly flights on a Taipei-Hong Kong-Jakarta routing with pick-up rights for the Hong Kong-Jakarta leg. All the flights are operated with widebody aircraft except one of the two Garuda flights and the one Tigerair Mandala flight. Jakarta-Hong Kong is about a five hour flight.

Cathay Pacific currently has a leading 46% share of seat capacity in the overall Indonesia-Hong Kong market, according to CAPA and Innovata data. Hong Kong Airlines has about a 20% share while Garuda has a 16% share, CAL 13% and Tigerair Mandala 5%. 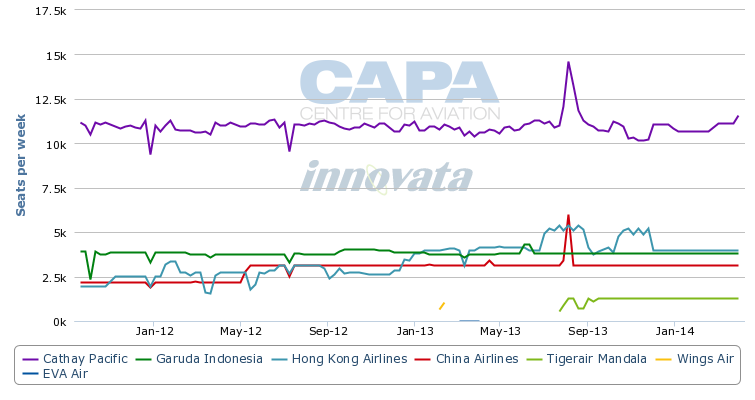 Hong Kong has become an important destination for Tigerair Mandala as it aims to diversify its international network and improve average aircraft utilisation. All its Hong Kong flights are and will be operated during overnight hours, giving the carrier an opportunity to lower its unit costs.

Tigerair Mandala is keen to enter routes not already served by any LCC as it sees opportunities to stimulate demand in the fast-growing Indonesian market. This includes new point-to-point domestic routes such as Yogyakarta-Palembang, which was launched on 1-Oct-2013 and is not served by any other carrier, as well as medium-haul international routes to North Asia not currently served by any LCCs.

Mandala also serves Malaysia and Thailand, giving it as many countries (four) as much larger Indonesia AirAsia. A relatively even mix of international and domestic expansion is expected as Tigerair Mandala aims to double its fleet over the next 15 months from nine aircraft currently to 18 by the end of 2014.

New routes to Hong Kong would also improve Indonesia AirAsia’s average aircraft utilisation as the carrier currently only has one overnight flight, operating one of its four daily frequencies from Bali to Perth in Western Australia. The planned Surabaya-Hong Kong route would be the carrier’s longest route and potentially the longest narrowbody route in the AirAsia Group.

Medan-Hong Kong, which is not currently served by any carrier although has been under consideration by Cathay Pacific regional subsidiary Dragonair, would be even longer. Bali-Hong Kong is slightly shorter but still well over four hours. (Indonesia AirAsia has not cited Bali-Hong Kong as a potential route but it would be logical given the carrier already has six international routes from Bali compared to four from Medan and four from Surabaya.)

AirAsia prefers to keep its A320s operating routes of four hours and less. Bali-Perth is just under four hours. Several but not all LCCs have similar preferences as the operating economics of long narrowbody flights in LCC configuration can be challenging from a profit standpoint. The AirAsia strategy is also partly driven a need to leave routes of over four hours to its sister carrier AirAsia X, which operates A330s. But this is not a factor in Indonesia because AirAsia X only operates from Malaysia with a Thai affiliate expected to be launched within the next several months.

Lion also has no intentions of operating its narrowbody fleet to its maximum range, keeping its 737-900ERs to routes of four hours or less. Lion Group CEO Rusdi Kirana believes Hong Kong cannot be profitably served from Indonesia by an LCC and says Hong Kong will at some point instead be served by its full-service subsidiary Batik Air.

For Lion, the strategy is not only driven by the unfavourable operating economics for longer LCC narrowbody flights but what Mr Kirana sees as a resistance from Indonesian consumers to fly LCCs for over three or four hours. Tigerair Mandala and Indonesia AirAsia have a different perspective and believe with low fares Indonesians can be persuaded to fly LCCs on five-hour flights. These carriers also tap more into Indonesia inbound traffic as they can leverage the Tigerair and AirAsia brands in markets such as Hong Kong, where each group already has a large presence. Lion has a strong Indonesian brand but is not well recognized in other markets.

The Lion Air Group is currently not planning any short-term international expansion at the main Lion brand as the carrier sees bigger opportunities to pursue further domestic growth. But the group is currently expanding in the Indonesia-Malaysia market, where AirAsia is significantly larger, by using its Malaysian hybrid subsidiary Malindo. The group also plans to enter the Indonesia-Thailand market within the next few months using its new Bangkok-based affiliate Thai Lion.

AirAsia and Tigerair, however, are currently pursuing faster international growth than the Lion Group. Jetstar, which is currently only slightly smaller than Lion in the Indonesian international market, is also pursuing growth with additional flights on existing Singapore-Indonesia routes from the end of Oct-2013 and a recently launched route from Perth to Lombok.

The expansion in Indonesia’s international market by the AirAsia, Tigerair and Jetstar groups is a reflection of the huge opportunities in the market, which remains relatively under-served. But it is also a reflection of the bigger challenges that LCCs face in competing domestically against Lion given the scale Lion has built up with the group’s approximately 50% share of Indonesia’s massive domestic market.

With Lion continuing to focus mainly on the domestic market, new un-penetrated international routes such as Surabaya to Hong Kong and Ho Chi Minh are appealing. But proving the viability of such routes could be challenging.