India’s domestic air passenger growth slowed to 8% in Dec-2011 to less than half the pace of growth experienced in calendar 2011 and down from the 17-22% growth rates seen between Jun-2011 and Oct-2011. While passenger numbers in India’s domestic market have seen growth now for 31 consecutive months, the result for Dec-2011 marks the end of 16 consecutive months of double-digit growth. This single-digit growth in the peak month of Dec-2011 (to 5.63 million passengers) is a sign that slowing economic growth is affecting air travel and reflects impending capacity caution by some of the nation’s largest players.

India’s domestic passenger numbers increased 16.6% to 60.7 million passengers in 2011, averaging out at 5.1 million passengers per month, and up 74% from 2006 levels. The largest stand-alone carrier was IndiGo with a 19.5% market share, with IndiGo also the fastest growing carrier in 2011. 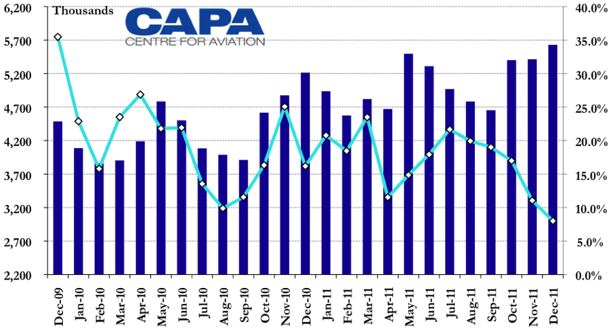 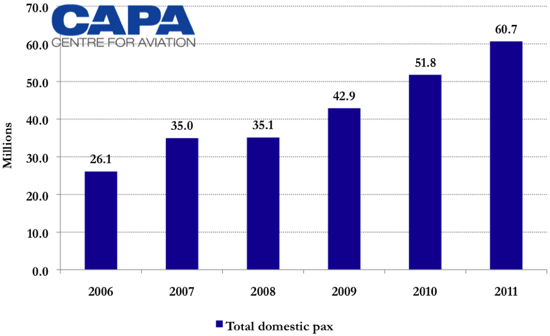 Behind IndiGo, Jet Airways was the second largest carrier in the domestic market in 2011, with an 18.3% market share, followed by Kingfisher Airlines (18%) and Air India (16%), with JetLite (7.6%) and GoAir (6.1%) the smallest carriers in the market with single-digit market share. 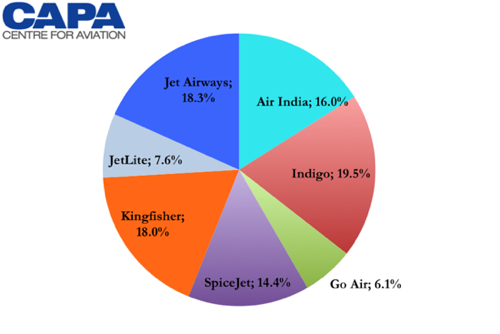 Passenger growth was clearly driven by the LCC segment in 2011, led by IndiGo, although all the carriers in the domestic market reported growth in 2011. At the other end of the spectrum, Kingfisher Airlines was the slowest growing carrier, with Air India also reporting single-digit growth across the 12-month period and Jet Airways reporting growth of below 15%. 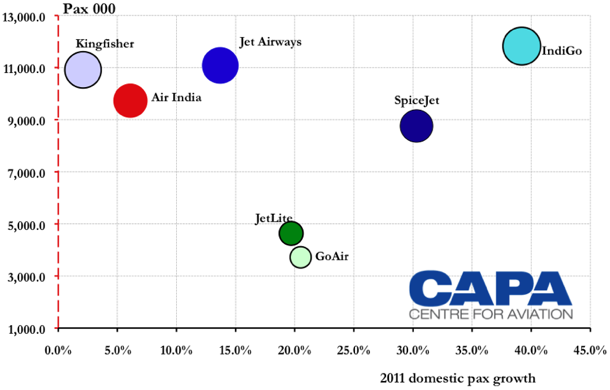 Growth will continue in the domestic Indian market in FY2012/13, albeit at a slower pace, partly on account of increasing costs and fares.

Jet Airways this week said it plans to maintain capacity induction in the year “sedate”, with a maximum increase of around 5%. The airline industry will see capacity induction between -5% and +5%, Jet Airways predicted. If capacity does decline, it will be the first time in the past five years the domestic Indian market will witness net reduction of capacity. The silver lining of this would be that yields, unit revenues and load factors would likely improve. Jet Airways forecasts it will see yield improve, and load factors of around 80% in Feb-2012.

Contrasting Jet Airways' comments, IndiGo president, Aditya Ghosh, this month confirmed the carrier plans to continue to expand its fleet by 12 aircraft during 2012 and commented in an interview with The Hindu Business Line, that overcapacity in the Indian domestic market was a “myth”.

"India is a country of over 1.2 billion people and air travel has just begun. Affordable fares with economic growth at about 7-8% year-on-year basis will result in aviation traffic growing at about 15-16%. We have around 400 commercial aircraft currently in India for scheduled operations. With growth of 15-16%, we should double the capacity in the next few years. China, which is similar to India in terms of population, is aggressively growing its aircraft capacity to keep pace with its economic growth,” Mr Ghosh said. He continued: “The rail and road network and capacity in India is not enough to cater to the burgeoning demand of travel. Over-capacity is a myth in India. Our aircraft penetration is less than one-fourth of even countries like the Philippines and Indonesia, and a fraction of that in the developed markets like the US and Europe. The main issues are the rising cost of aviation turbine fuel and depreciation of rupee against the dollar. Both are impacting the costs negatively. Rising airport costs are another issue impacting airlines”.

Meanwhile, international traffic continues to feel the impact of the rupee's decline against the dollar and deteriorating global economic conditions. India’s Prime Minister Manmohan Singh has forecast that economic growth may slow to 7% in the 12 months ending 31-Mar-2012 (down from an Oct-2011 forecast of 7.6% growth), foreshadowing slowing growth in the months ahead, although recent indicators suggest that the economic situation will likely stabilise in 2012 before strengthening in coming years. The IMF has also cut its economic growth estimates for India from 7.8% to 7.4% for 2011, and from 7.5% to 7.0% for 2012. 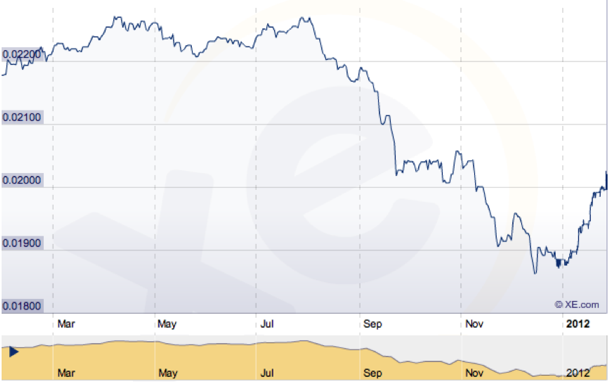 Robust growth in 2011 fails to translate into profits

As previously noted by CAPA, growth in the Indian market in 2011 has failed to translate into profits for India's airline industry, where all the major carriers except IndiGo are believed to be loss-making, as a result of the impact of high jet fuel costs and an inability to raise fares in a competitive market.

CAPA estimates Indian carriers combined will lose USD2.5 billion in the 12 months ending 31-Mar-2012. This is on total revenues of just under USD10 billion – a worse result than even FY2008/09, when traffic was declining and fuel prices spiked at USD150/barrel. In the domestic market, India’s airlines lose USD25-30 every time a passenger boards an aircraft.

These considerable and escalating loss figures will likely lead to some changes to the sector amid calls by airlines to the Government to improve the operating environment for airlines. Key areas of expected reform are anticipated to encompass the ability for airlines to import ATF directly and regulatory changes to approve foreign direct investment (FDI) by foreign airlines in Indian carriers. 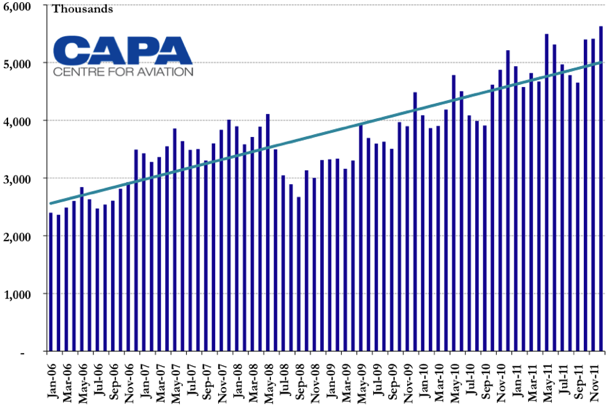 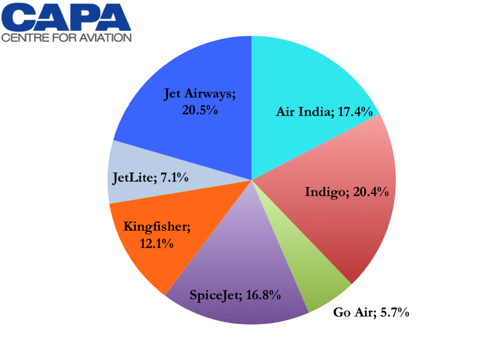 The market share decline at Kingfisher Airlines occurred after the cash-strapped carrier grounded aircraft and cut routes, resulting in significant capacity reductions in the month. Up until recently, IndiGo and Kingfisher had been almost neck-to-neck in the market share race, although Kingfisher’s market share has seen a slump from a high of 20% in Apr-2012 to around 12% in Dec-2012, while IndiGo has simultaneously continued to add capacity and is operating with industry-leading load factors. With continued service cancellations, Kingfisher will likely see further market share losses in the coming months.

Jet Airways is the largest beneficiary of the developments at Kingfisher Airlines, as it has also been able to increase its corporate travel market share, with yields understood to have benefited from the capacity cutbacks by Kingfisher Airlines seen across the board. 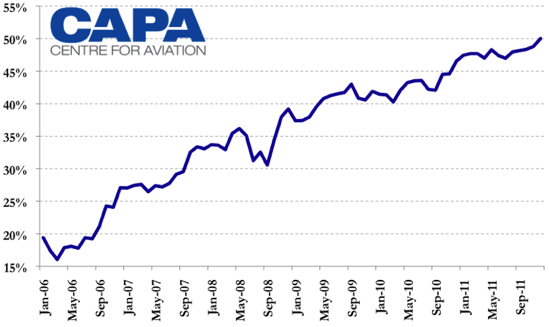 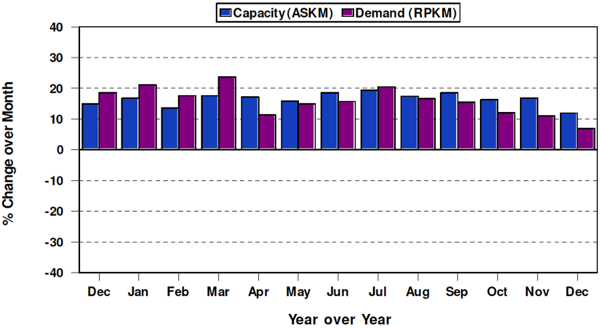 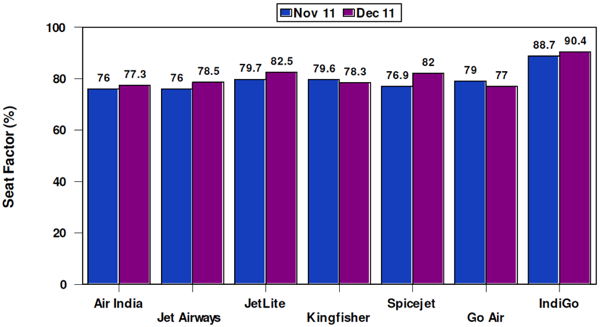 India's domestic aviation market expansion has been among the strongest in the world, tripling in the past five years, according to IATA, to become the ninth largest aviation market in the world. Given the strong market fundamentals, the robust rate of growth is expected to continue with the Indian Ministry of Civil Aviation’s Vision 2020 statement envisaging a compound annual growth rate of around 15% in the next five years. However, domestic passenger growth will likely slow in 2012 to just under 10%.

As previously noted by CAPA, Indian aviation enters 2012 facing its most critical challenges since the advent of the 2004 industry reforms. The key challenge going forward, amid an environment of slowing GDP growth, will be to ensure yields and profitability are maintained. At the same time, the nation’s full service carriers continue to suffer under the burden of approximately USD16 billion in debt, ensuring financial recovery will be slow in India’s aviation market.

Meanwhile, both capacity reductions and fare increases are likely in 2012, as the industry recognises that it is better to have a 10-12% growth and be profitable instead of growing at 17-18% and lose USD2.5 billion. Improved profitability at airlines will also have a positive impact on airport operators, who are facing large non-payment in dues by airlines including Air India and Kingfisher Airlines.