Iberia’s president Sanchez-Prieto: Madrid’s Barajas Airport could be “left behind"

Spain exists in a tourist bubble, being one of the most visited countries on earth. But much of that tourism has historically originated out of Europe.

That could be about to change after visits from some key countries have dried up during the coronavirus pandemic, prompting regional authorities to seek out new markets. One of those markets is Latin America, which is well served already by Iberia and by Air Europa, which is the subject of a takeover bid by IAG, which in turn is already the parent company of Iberia.

Accordingly, there is already good capacity between Spain and Latin America and it could grow further if Air Europa does come under IAG’s wing.

But there are glaring gaps in Spain’s long haul route network, and especially to and from Asia Pacific. This has prompted Iberia’s president to warn that the country’s critical hub airport, Madrid’s Barajas, will be “left behind” without a strong operator capable of developing it.

But even the formidable trio of BA, Iberia and Air Europa would have much to do to fill the gaps quickly and efficiently, and it isn’t clear either how they could do it with cannibalising each other's ‘patch’.

Spain’s importance will wane without a strong international hub

Iberia’s president Javier Sanchez-Prieto said recently that there could be "no better news for the development of the Madrid hub" than an agreement between the airline and Air Europa, warning that the hub will be left behind without a strong operator capable of developing it.

Mr Sanchez-Prieto warned that although Spain's domestic air travel demand is strong, it must be aware of the global competition (internationally), and accordingly it must develop strong companies to compete.

In this regard, he underlined the importance of capitalising on markets such as Southeast Asia, to which Spain only offers 5% of its seat capacity, compared to 25% from other European hubs.

IAG’s attempt to acquire Air Europa thwarted for now by EU; Spanish government could step in?

International Airlines Group (IAG), which includes Iberia, had been in protracted negotiations to acquire Air Europa, and the proposed transaction had come under the scrutiny of the European Commission to examine whether it would negatively affect competition on domestic, short haul and long haul routes to and from Spain, possibly leading to higher prices and reduced quality for travellers.

As a result, the deal collapsed in Dec-2021. That opened the way potentially for the Spanish government to take a direct stake in Air Europa under a new structure reported to be under discussion, in which state-backed pandemic-related bailout loans could be converted into a government holding of approximately 40% in the airline.

In such a scenario IAG might also acquire a stake, leaving the Hidalgo family (Air Europa’s current owners through Globalia) with a small holding. The deadline for the agreement facilitating the entry of the airline, Spain’s third largest after Iberia and Vueling, into IAG was extended at the end of Jan-2022.

So it seems there are two separate initiatives by which Air Europa might still, to varying degrees, come within the orbit of IAG.

Vueling plays a minor role at Madrid; Air Europa is the second airline there

Vueling, an operating division of Iberia, is an airline based at the airport in Barcelona (Spain’s commercial capital on the Mediterranean coast), where it has 35% of seat capacity just now, making it the largest airline there. In contrast, it has a minimal presence at Madrid, operating only between there and Barcelona and Florence in Italy, which is another main base. 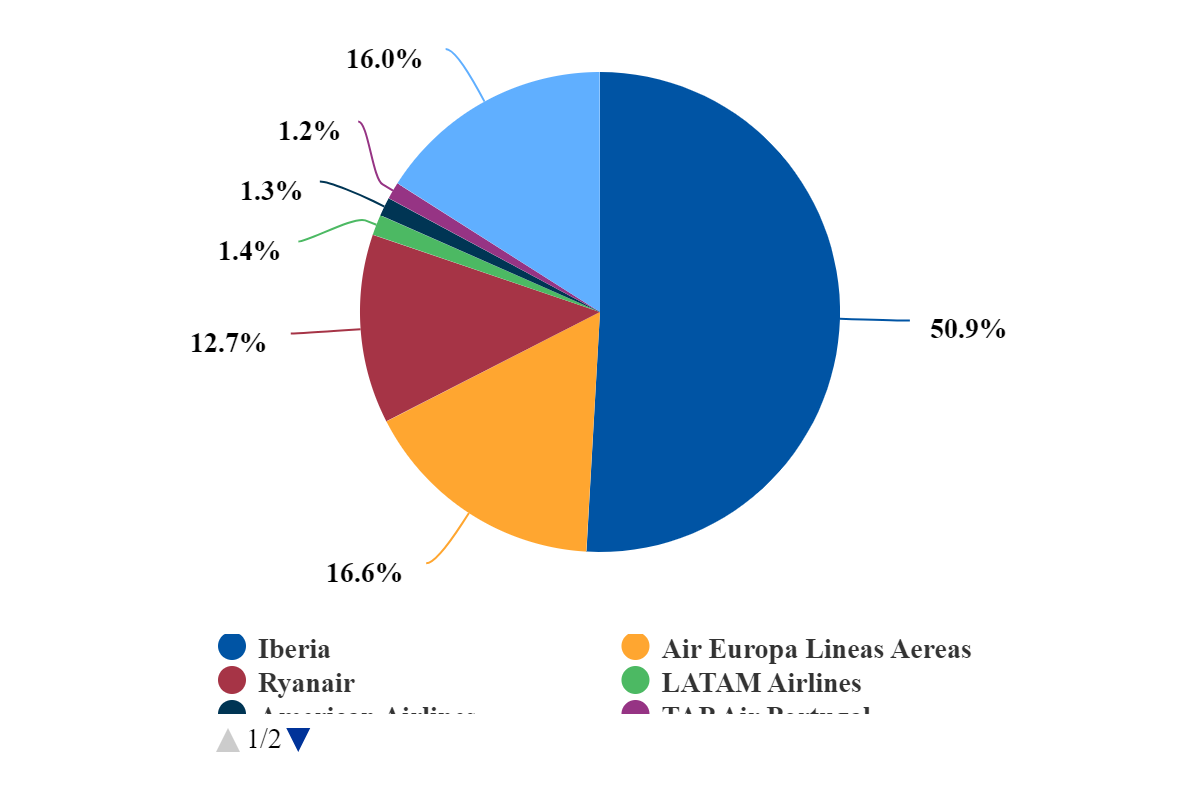 Of greater significance is where that capacity is allocated.

The Air Europa route map below demonstrates the strength of the airline in Latin America (19 destinations), as well as the Spanish and European network that feeds it. 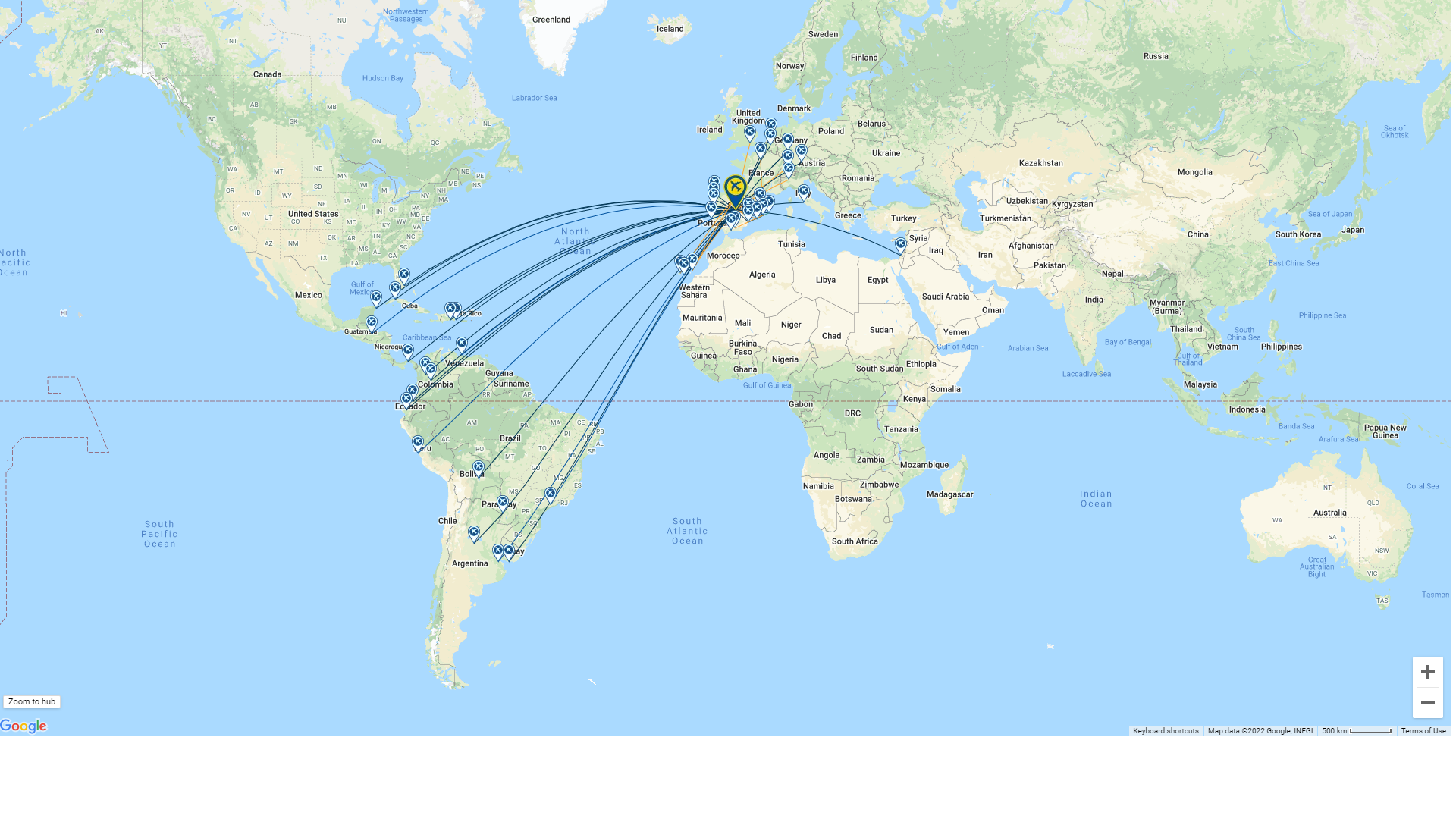 That network supplements, and indeed is almost equal to, the Iberia network to Latin America, which comprises 22 destinations, although Iberia has a considerably greater domestic and European feed market. 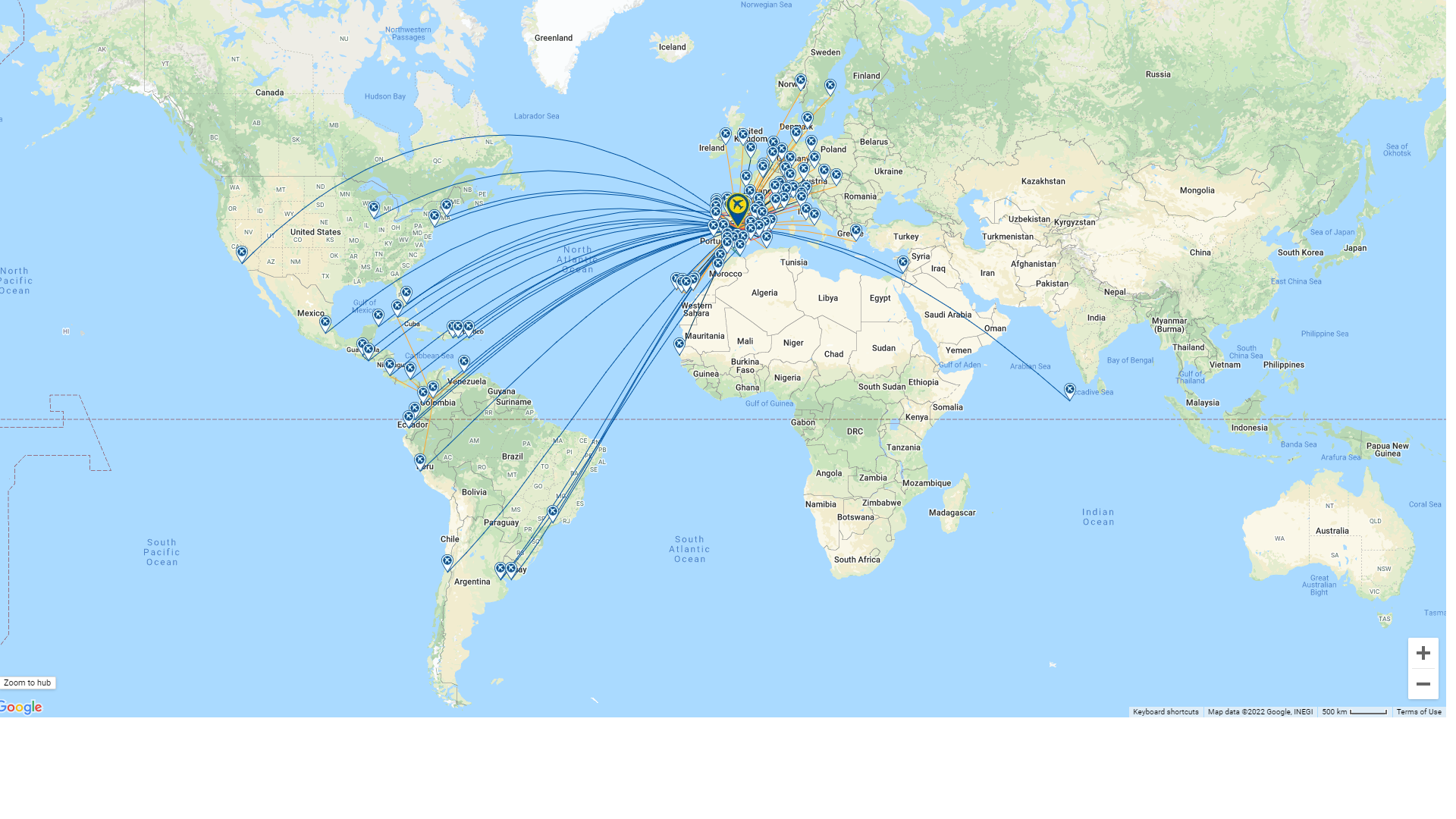 What to do about Asia Pacific would be a conundrum for an IAG consisting of BA, Iberia and Air Europa

There is also the question of where it could operate to within an IAG scenario.

As Mr Javier Sanchez-Prieto said, Spain’s entire seat capacity to Asia Pacific amounts to only 5% of the whole and that is in ‘normal’ times. There is no obvious incentive to IAG to do anything that would impact on British Airways’ Asia Pacific capacity, which usually is much higher than it is now, as many countries in the region are still imposing very stringent pandemic-related regulations.

BA’s capacity to South Asia is 4.2% of the total presently, and that of Southeast and North Asia so small as barely to register at all. Clearly, improving those ratios quickly will be very important to BA as soon as it can, but routing passengers via Spain would not be.

But if the Spanish government were to take a share in Air Europa that would be a different matter. It would clearly have an incentive to build air links to such an important economic region.

Mr Sanchez-Prieto’s remarks were very specific about Madrid being left behind without a strong operator capable of developing it. What is not clear is whether or not he envisages Iberia and Air Europa being merged in some way in order to do that. There would be some route duplication to deal with.

Madrid has fared reasonably well during the pandemic by comparison to some of its peer airports in Europe.

Traffic had been building steadily, as evidenced by the chart below, and in 2019 the airport was the fifth busiest, with 61.7 million passengers.

In 2020 it slipped to seventh, with 17.1 million, and retained that position in 2021 with 24.1 million – broadly on par with Frankfurt and almost five million ahead of London Heathrow Airport, the main base by far for British Airways. Domestic supply and demand had much to do with that result, although there was a return of foreign tourists in some numbers during summer and early autumn 2021. 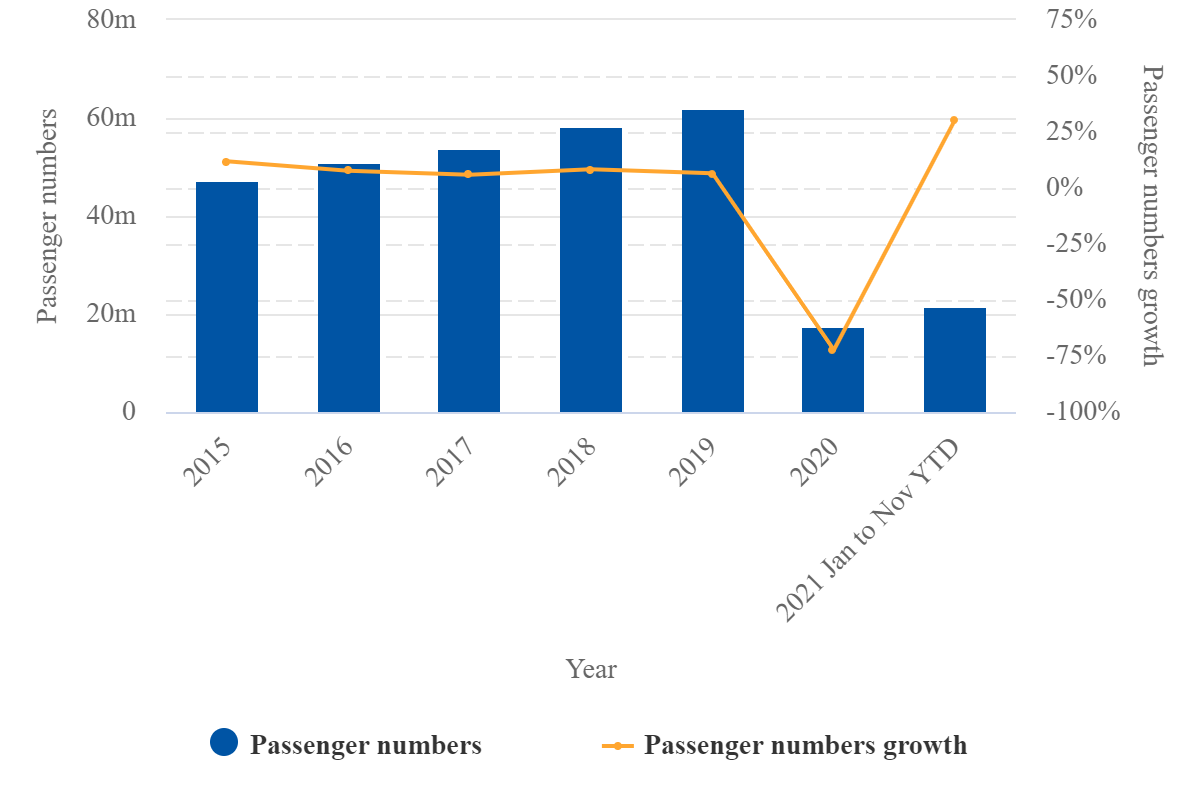 The expectation is that they will return in even greater numbers in summer 2022 if the latest Omicron variant subsides by that time, as is usually the case, benefitting Madrid, Barcelona, and the coastal and island resort cities’ airports.

But in ‘normal’ times that traffic will always be there, albeit that the point of origin might vary.

For example, some of the coastal cities, highly dependent on tourists from the UK for many decades now, have begun to seek out new markets in Europe and further afield after UK-originating visitor numbers plummeted on account of the UK’s stringent (COVID-19) regulations during 2020 and early 2021.

Latin America is one of those markets, and while coastal and island resorts such as Palma de Mallorca, Málaga, Alicante and Tenerife are unlikely to receive direct flights from that continent (even though Air Europa is headquartered, for now, in Mallorca), the expectation in those municipalities is that passenger transit via Madrid will have the same result.

Hence, hopes are high that Air Europa will become part of the IAG family and boost those travel options from Latin America. Or at the very least, that the government will take a controlling stake to the same end.

However, it is the scarcity of Asia Pacific routes that is the principal concern to Barajas’ future.

In the week commencing 31-Jan-2022 Asia Pacific notched up virtually zero percentage of Barajas’ capacity; actually just 509 seats for the week. (There is, in fact, one Asia Pacific route: to Seoul). 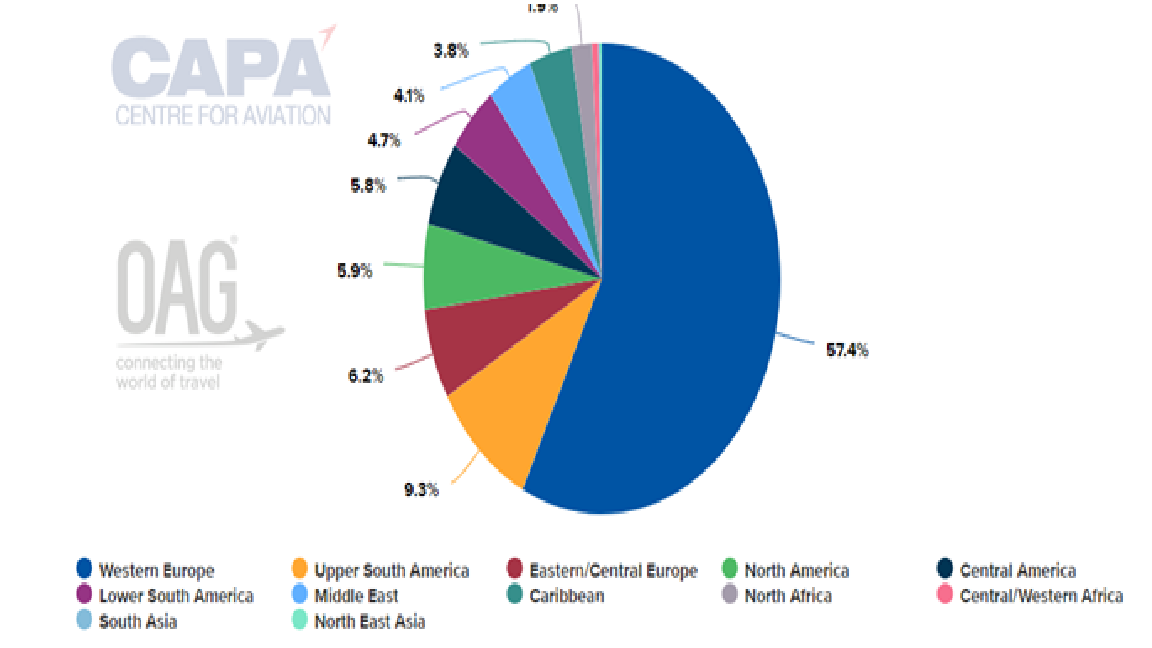 Madrid has the capability to host Asian traffic for nearby countries within its own borders, and to act as a catalyst for Asia-Latin American connections

Madrid airport is well positioned to handle business and leisure traffic destined not only for the rest of Spain but also Portugal, from where there are no services by the national carrier to Asia Pacific. Also parts of southern France, North Africa and even Italy, where the new flag carrier, Italia Trasporto Aereo (ITA Airways) has very few transcontinental flights at all yet. 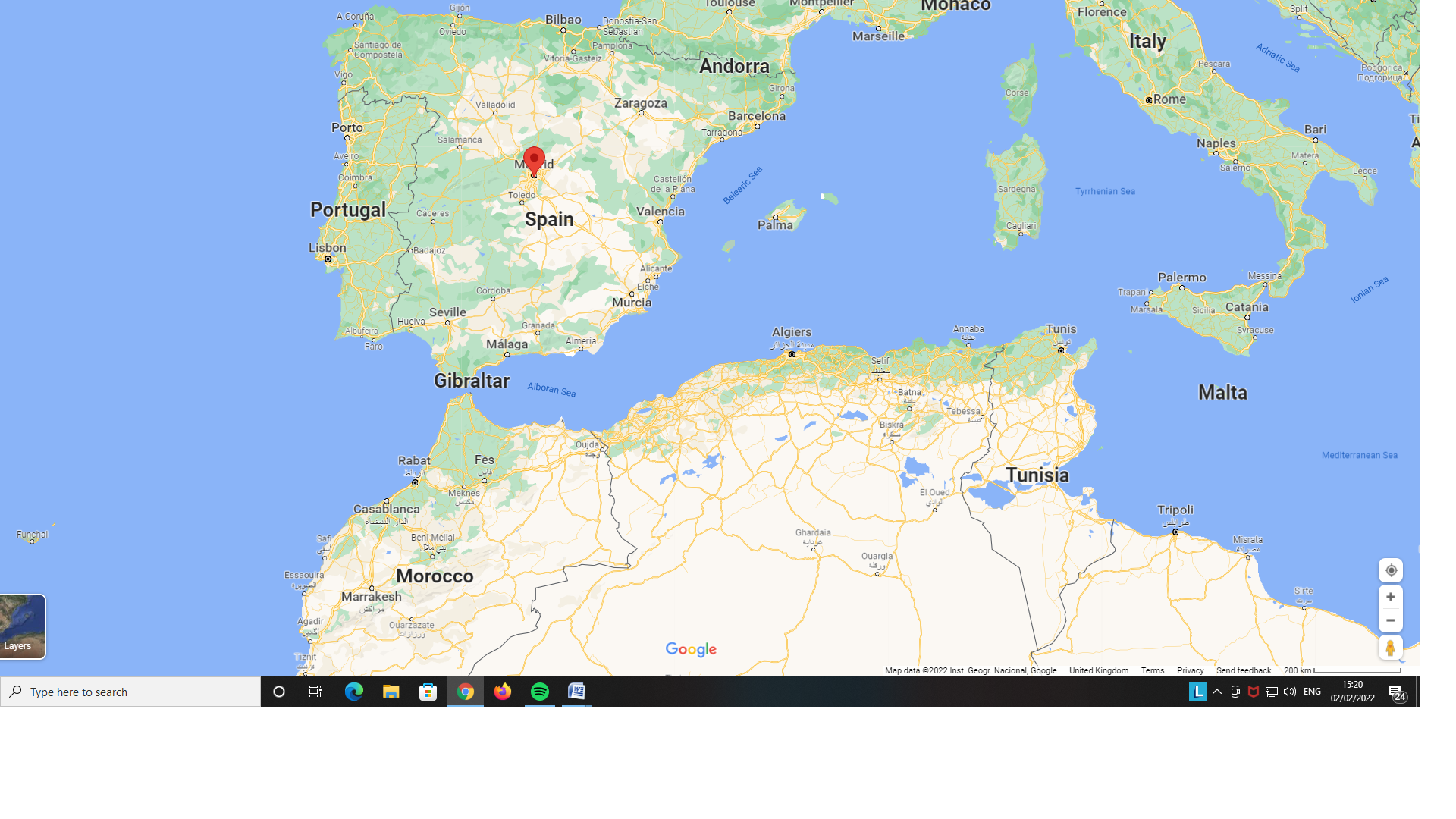 And that is not to mention the potential to connect Asia Pacific travellers to Latin America, where a significant Iberia/Air Europa network already exists.

In a forthcoming CAPA research report series on which airports will emerge in the best condition from the coronavirus pandemic the following observations are made about Barajas Airport: