Iberia increases African presence with services to Accra and Nouakchott

Iberia’s planned service to Accra and Nouakchott will give Spain its first routes to the West African nations of Ghana and Mauritania. The services, to be operated with A319 and A321 equipment, respectively, will provide links for business travellers into the economic centres of each country. Iberia’s presence in Africa is strongest in the north and west, so the new services continue that strategy as the African market grows.

The launch of the services to Ghana and Mauritania on 01-Jun-2012 and 03-Jun-2012, respectively, will bring the number of destinations in Iberia’s African network to 12. Iberia is currently the 23rd largest carrier to operate between Europe and West Africa and although its services to Accra and Nouakchott will not be significant enough to dramatically increase its ranking, it will provide the two West African countries with increased air services to their main trade market of the European Union (EU). Within the EU, Spain is already Mauritania’s third largest trade partner (sixth overall).

The Nouakchott schedule is slightly more convenient, with Iberia departing Madrid at 20:35 and arriving Nouakchott at 00:10 and departing Nouakchott at 02:15 and arriving in Madrid at 10:35. Iberia’s European codeshare partners with limited access into Africa would particularly benefit from the Madrid-Nouakchott service, as the carrier’s service departs in the evening allowing time for travellers to connect from other airports. Overall the timings are not ideal, but once again the market has limited options. Unlike the Madrid-Accra service, the Nouakchott service will not be non-stop as the service will transit through Las Palmas in the Canary Islands.

Ghana is not only one of Africa’s fastest growing economies but the world’s too. It is second only to Qatar in terms of GDP growth rate.

Ghana’s aviation industry is the second largest in West Africa, seeing approximately 38,000 seats per week. A number of international carriers serve Ghana including British Airways, Emirates, Delta Air Lines and KLM, as well as African carriers Air Nigeria, Kenya Airways, Arik Air and ASKY Airlines. While lacking a successful carrier of its own (local Starbow Airlines is still establishing its network), Ghana will continue to grow through the future additions of Fly540 Ghana.

The three largest carriers to operate to Accra Kotoka Airport are British Airways, Lufthansa and Air Nigeria. Iberia’s plans to deploy 122-seat A319 equipment to Accra International Airport is not enough to make it a significant carrier at the airport, although its partner British Airways – part of International Airlines Group – is the market leader. 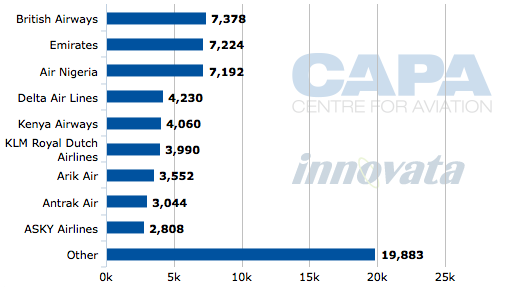 Mauritania, while rich in natural resources such as diamond and phosphate, still depends largely on agriculture and livestock. Around 40% of the population lives in poverty. Upon Iberia’s entry into Nouakchott, it will become the second European carrier to serve the country’s largest airport. 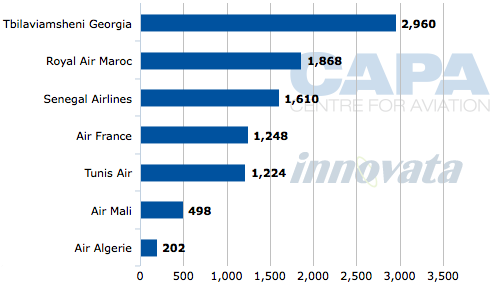 Just seven carriers serve Mauritania, with the smallest carrier, Air Algerie, serving the main airport just once a week and the largest operating service 14 times per week. While Emirates recently opened an office in Nouakchott, it is yet to indicate plans to launch service there.

Mauritania has a number of iron-ore, copper and gold mines including multinational companies such as US Newmont Mining Corporation and Canadian-based Kinross Gold Corporation, Red Black Mining and REX Diamond Mining Corporation. Although Iberia serves US destinations, it serves none in Canada.

Even in bad economic times, seeing growth in Africa

The new services – at a time of a large economic downturn in Europe – attest to Africa’s growth and potential. Iberia’s new services lay the foundations for it to improve its offering to Africa. At this stage the frequencies are limited, as is the case for many African services, but they will be welcomed in the growing market. 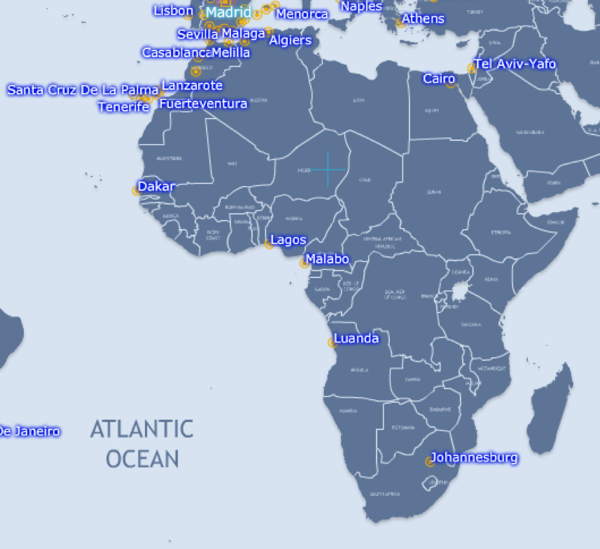