West Africa’s aviation industry is being led forward by Nigeria and Ghana. In Nigeria, the largest carrier, Arik Air, recently revealed itself as Boeing’s un-named B747-8 customer, while national carrier Air Nigeria is in the process of re-establishing its long-haul network. While the airlines are not without their problems, the market is growing and new entrants are appearing. In Ghana, the country is opening up to international carriers who are eager to increase their frequencies to the gold-producing country. Ghana itself is the site of one of Africa’s newest carrier, Starbow Airlines, and an impending base for pan-African LCC, Fly540.

Nigeria: A market with a low propensity for travel, but lots of potential

Nigeria is a rich land. Its borders contain mineral and petroleum wealth and its population comprises 15% of the continent’s total. Egypt, second in terms of population, has only about 60% of Nigeria’s total, and Lagos just trails Cairo as Africa’s largest city. Despite Nigeria’s relative wealth, Airbus, in a graph displaying national propensity to travel by air, ranks it very near the bottom of the list and just barely ahead of war-torn Afghanistan. 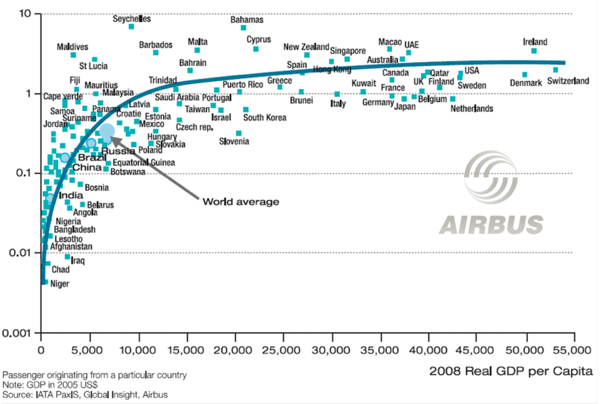 Nigeria is the world’s seventh most populous nation but because of its history and current problems, it remains relatively isolated from much of the rest of the world. There are only 74 services per week from all of Western Europe to Nigeria. From Madrid, Iberia's base, the service is operated with an A319, one of the smallest aircraft in the Spanish carrier’s fleet. Even from the normally dominant Gulf region there are only 21 weekly flights; roughly equal to the weekly offer by Emirates alone to India’s Chennai.

Frequencies and seats per week between Nigeria and all international destinations: 17-Oct-2011 to 23-Oct-2011

Continental Airlines will launch Houston-Lagos service on 14-Nov-2011, which will make it the second US carrier to operate the route. Soon after the launch date, Continental will offer the highest capacity on the route from its Houston base. The Nigeria-US route is dominated by business travellers, with many US companies having offices or headquarters in Nigeria, such as multinational energy business, Chevron Corporation. 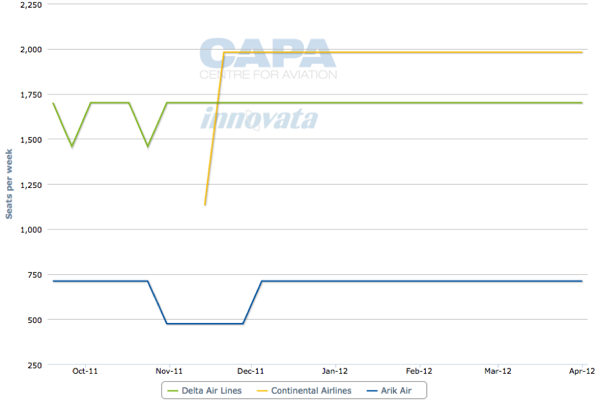 Between 2000 and 2009, 105,667 Nigerians obtained lawful permanent resident status in the US, with 15,253 in 2009 alone. There are an estimated 206,604 Nigerians living in the US, making Nigeria the largest African source country of immigrants to the US. New York has one of the highest Nigerian populations, after Texas. Delta operates in Nigeria service from New York JFK and Continental will launch its from Houston.

Percentage of Nigerians living in the US by area

The UK is Nigeria’s largest market for aviation and is home to a large Diaspora community, reinforcing Nigeria’s colonial history. The UK is now the third largest Nigerian Diaspora community and the second largest excluding African countries. Between Apr-2008 and Mar-2009, the UK issued 1,690 settlement visas to those applying in Lagos and Abuja. During the same period, 23,750 family visit visas were granted by the UK Government. Western Europe is Nigeria’s largest market for air service, while North America is its seventh. 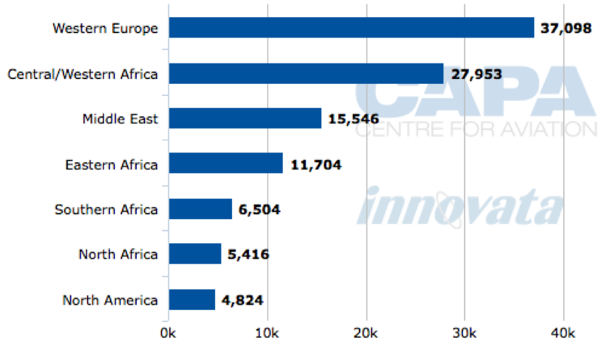 Currently, Nigerian carrier Arik Air operates the UK-Nigeria route along with British Airways and Virgin Atlantic Airways but only until 29-Oct-2011 - when Arik will drop its five times weekly service as part of its efforts to streamline its network and cut non-profitable routes. The suspension comes as a surprise, as the UK is an important trade partner for Nigeria and is ranked as its third largest import partner. In 2009, UK exports of goods to Nigeria was worth GBP1.235 million and in 2008, exports of services was worth GBP1.279 million. Nigeria is the UK’s 33rd largest trade partner.

Arik Air recently revealed itself as the previously unidentified customer of two B747-8s, which it plans to operate on its “key long-haul routes”, which will soon only include New York JFK and Johannesburg after the London suspension.

On 29-Nov-2011, Arik Air will begin its first route to the Middle East, with three times weekly Lagos-Abu Dhabi service with A340-500 equipment. Emirates currently offers 4,816 seats a week on the route from Dubai. The UAE was Nigeria’s 15th largest trading partner in 2010, suggesting ties between the two countries could be strengthened through the air service. The route should benefit tourism, which Nigeria has identified as a key way to develop itself as a top African economy. As expressed at the annual Arabian Trade Market, Nigeria is eager for the Middle East to invest in its tourism sector. 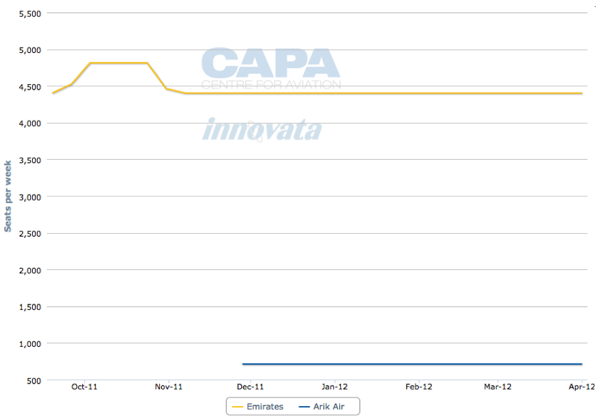 Nigeria has no direct links to the growing markets of Asia. Even between Lagos and Cairo, Africa’s two largest cities, there are under 650 seats each week. Egyptair operates five times as many weekly seats between Cairo and Khartoum, a city that has been involved in civil war for a decade. However the 21 services to Dubai and Doha provide new options to Asia and India that supplement traditional European hubs. As seen in other CAPA analyses of the African aviation market, the Middle East carriers are enjoying a dominant position in Africa-Asia markets, combining and building traffic over their powerful hubs.

Nigeria’s third largest carrier, Air Nigeria, had hoped to re-establish its long-haul network by Sep-2011 through a service to London Gatwick, however this has stalled and no updates have been announced. The carrier also previously mentioned plans to launch a New York service, to compete with Arik, United and Delta, but again, this plan has not come to fruition. See related CAPA analysis: Air Nigeria re-establishes long-haul routes

Air Nigeria took over the position of Nigeria’s national carrier when Nigerian Airways folded in Aug-2004. Air Nigeria operates a fleet of 10 aircraft, and has eight E-190s on order, which it plans to deploy on regional and domestic routes. The carrier’s medium-term goal is to operate to all major West African cities. It has not announced plans to launch any long-haul services within Africa. 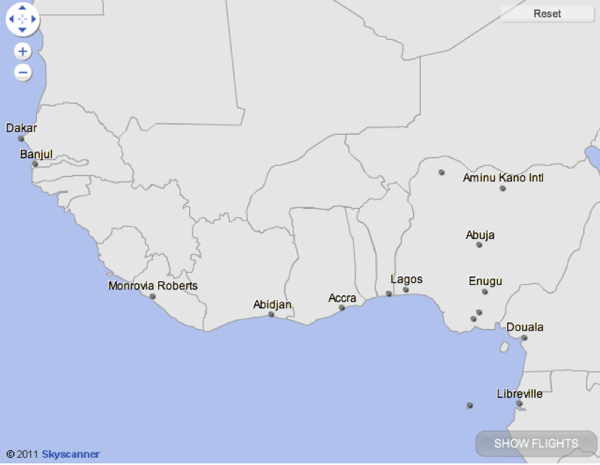 Nigerian President, Goodluck Jonathan, to “turn around the country”

Nigeria’s infrastructure is underdeveloped through lack of investment, however the government is working on repairing its deficiencies through its National Economic Empowerment Development Strategy (NEEDS), under the guidance of President Goodluck Jonathan.

The Federal Airports Authority of Nigeria (FAAN) recently undertook a major restructuring, as part of the President’s “transformation agenda” – a sorely needed initiative aimed at turning the country around before the end of the President’s tenure in 2015. During the period, the government expects to invest NGN465 billion (USD2.9 billion) in the transportation sector. The investment would cover roads, railways, ports, inland waterways and airports, through the evolution of a “multimodal”, integrated and sustainable transport system. The government is attempting to create a stable environment for Public Private Partnerships (PPP) through the implementation of new policies, legislation and institutional framework.

Ghana, while lacking a successful airline of its own, is becoming an increasingly popular market for foreign airlines. The county is home to only a handful of charter and commuter carriers including Air Ghana, Antrak Air, Airlift International of Ghana and as of Sep-2011, Starbow Airlines. 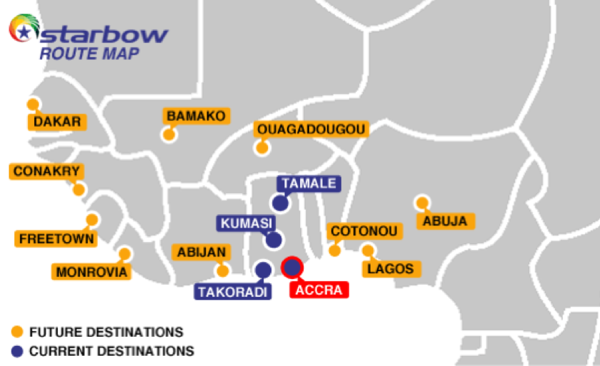 Emirates, Air Nigeria, KLM, Delta Air Lines, Kenya Airways and Ethiopian Airlines are the leading carriers in the Ghanaian international market, which includes many more carriers operating a small number of services than Nigeria. Lufthansa will increase its frequency in the market on 01-Nov-2011, by introducing a daily service with B737-800 equipment. For the week beginning 17-Oct-2011, Lufthansa offers 1,100 seats per week. 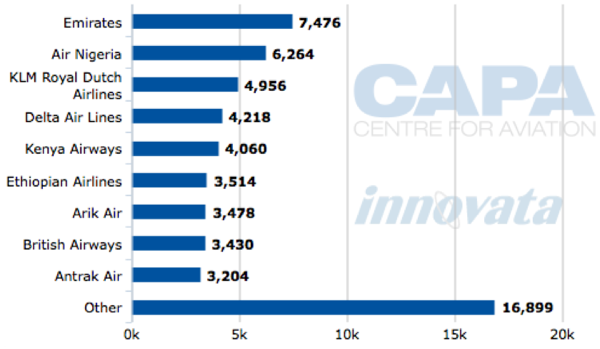 Fly540 to expand to Ghana

Kenya-based LCC Fly540 had hoped to extend its network into West Africa by establishing a base in Ghana. The venture, to be named Fly540 Ghana, will serve Senegal and Equatorial Guinea from a base at Accra Kotoka Airport. Fly540 has already started recruiting for cabin crew, retail agents, ATR72-500 first officers, engineers and customer service agents in Ghana. Fly540 had hoped to commence operations in the country by Oct-2011 however this date is likely to be pushed back slightly. The carrier is still in the process of converting its Air Service Licence (ASL) to an Air Operator’s Certification (AOC). See related CAPA analysis: Turnover growth continues for Fly540 as African expansion plans take off

Ghana’s top export product is gold, with the mineral accounting for 5% of the country’s GDP and 90% of its total minerals exports. The gold mining industry is dominated by AngloGold Ashanti – a South African based mining conglomerate with bases in 20 countries. Direct service operates between Ghana and South Africa, the US and Namibia – which are all sites for AngloGold Ashanti operations. Ghana’s 2009 gold production increased slightly from 2006 and it is now the 9th largest producer in the world, up from 10th in 2006**.

The proportion of business class seats at Accra Kotoka Airport is considerably higher than the worldwide average. 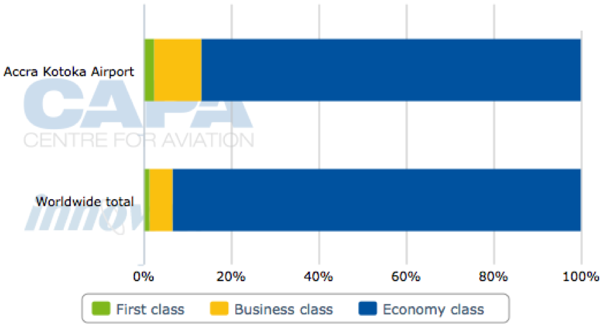 With its natural resources and oil reserves, West Africa is receiving increasing attention from international markets. Nigeria – rich in oil - and Ghana – rich in gold - are proving to be the stand-out aviation markets of the region. While both face difficulties, such as carrier debt, poor infrastructure and unaffordable travel, the economies of the countries are handily exceeding the global average GDP growth rate. Ghana’s GDP is estimated to increase 13.5% for 2011, while Nigeria should see a 6.9% increase. According to the International Monetary Fund (IMF) Ghana’s economy is expected to perform strongly because of its ability to return to private capital flows, which were an important source of financial funding before the GFC. Sub-Saharan Africa is showing a solid macroeconomic performance, with many economies now growing at rates close to their pre-crisis average. Nigeria is slightly slower in its growth rates, reporting a smaller-than-2 percentage point difference from pre-crisis levels. Ghana, on the other hand, is one of the continent’s fastest growing.

Nigeria and Ghana are headlining growth in West Africa, but it is mainly being captured by foreign (US, Middle East and European) carriers in the absence of financial stable and internationally competitive local airlines. 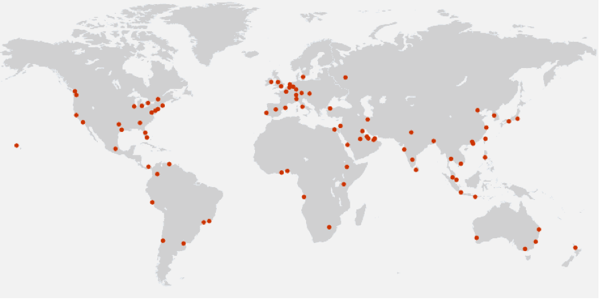 **According to the British Geological Survey, retrieved in Sep-2011

Nigeria Airways had a troubled and erratic time during its 45-year history. In 2003, a new airline, named Transatlantic Airlines, operated for a few weeks before it collapsed, leaving hundreds stranded. Next, the joint venture attempted by Virgin, resulting in the creation of Virgin Nigeria also had a brief and colourful life before Virgin divested itself of the association. The remnant is now operating domestic and regional routes as Air Nigeria.

Bellview Airlines had a similar poor track record. Founded in 1992, it finally disappeared in 2009 with many of its aircraft still derelict in Lagos. The staff then began a new carrier that still awaits certification, First Nation Airways. It is a repetitive tale of failure.

Ghana Airways ceased operations in Aug-2004, shortly after it was banned from US airspace. Ghana Airways suffered a wealth of problems including under-capitalisation and mismanagement. The carrier’s fleet, comprised of Soviet-built Ilyushin jets, could only be serviced in Russia. Ghana Airways served Russia but it was a loss-making route – most passengers were government officials who travelled for free.

Ghana International Airways (GIA) was established to replace Ghana Airways when it folded. GIA launched operations in Oct-2005 but was plagued with similar problems to Ghana Airways. In May-2010, GIA ceased operations, making it the second causality to Ghana’s aviation industry in six years. 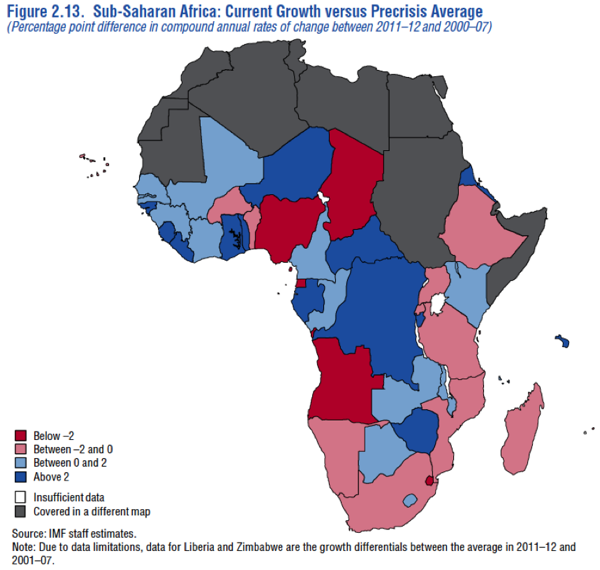 Despite efforts to diversify trade products, oil and natural gas are still Nigeria’s primary exports. As for agricultural products, Nigeria is a strong exporter of cocoa, palm oil, livestock and cotton. From the US, Nigeria imports machinery, chemicals, transport equipment (including US-made Boeing aircraft) and manufactured goods. Nigeria’s top trading partner for 2010 was the US, followed by the EU, India, China and Brazil (there is currently no direct air link between Nigeria and Brazil) 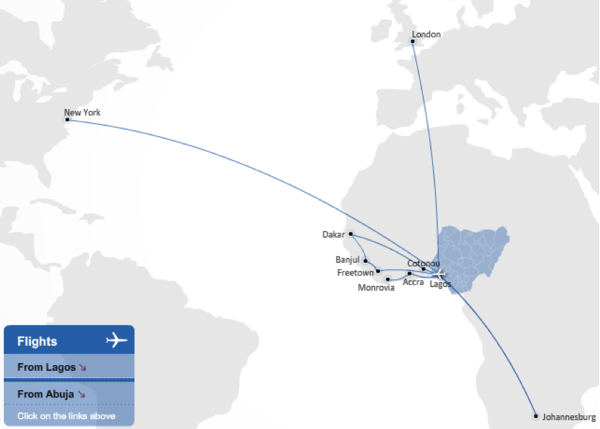 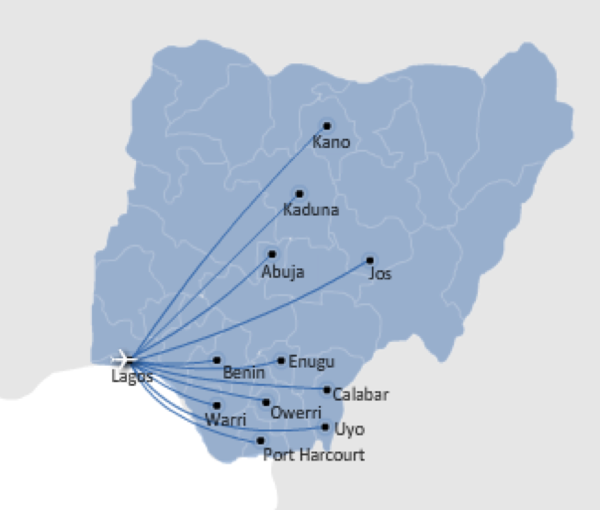 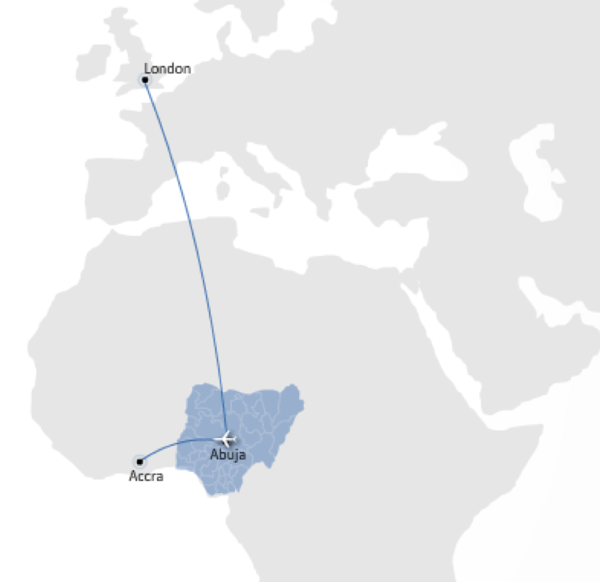 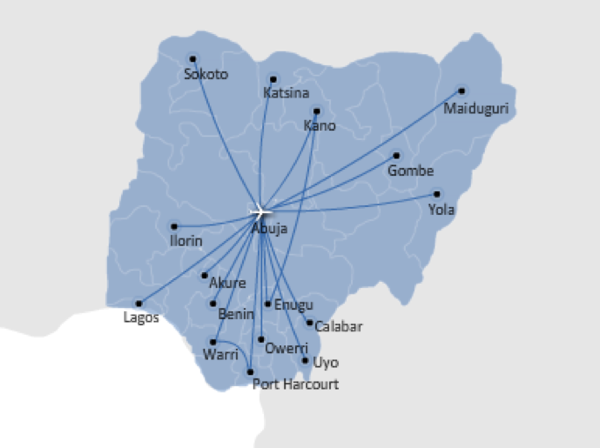