International Airlines Group (IAG), formed by the merger of British Airways (BA) and Iberia in Jan-2011, is facing increased Spanish headwinds as its largest single shareholder is in need of a massive bailout from the Spanish Government. Bankia’s parent company Banco Financiero y de Ahorros (BFA) holds 12.09% of the share capital of IAG and has asked the Spanish Government for a EUR23.5 billion rescue to cover exposures to real estate, deteriorating loans and accounting discrepancies. The embattled banking conglomerate has already announced it will divest several assets and its IAG shareholding is one of the assets being considered for sale.

At the closing the London Stock Exchange on 30-May-2012 IAG’s market capitalisation was GBP2.6 billion (EUR3.2 billion), valuing the BFA-Bankia stake in the airline group at GBP312 million (EUR390 million).

The financial mess of BFA-Bankia – and Spain's problems more generally – is putting pressure on the already depressed share price of IAG (the IAG stock closed at GBP140 pence on 30-May-2012, down from GBP176 pence on 30-April-2012) and is likely to create uncertainty for IAG over the new ownership of the 12% shareholding; a change of hands from a longstanding and supportive Spanish shareholder to a new investor might lead to a strategic shift and will inevitably bring changes to the board. Rodrigo de Rato y Figaredo sits on the IAG board as proprietary non-executive director representing BFA-Bankia but Mr de Rato, a former Finance Minister and past managing director of the International Monetary Fund, resigned on 07-May-2012 as executive chairman of BFA and Bankia.

On the other hand, it does open a strategic investment window for the more creative minds...

International Airlines Group share price (GBP pence): May-2011 to May-2012 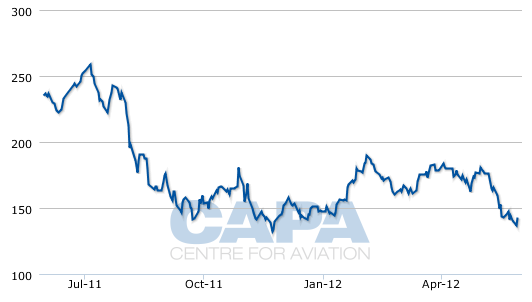 What will happen to BFA-Bankia is not clear and the outlook changes by the day. The Spanish banking conglomerate on 25-May-2012 restated its 2011 results to reflect a EUR3.3 billion loss rather than a EUR41 million profit, following a review of its loan portfolios and capital needs, and announced that it had worked out a restructuring plan with the knowledge of the Spanish Government and the Bank of Spain. The plan called for a recapitalisation of the group with EUR19 billion, which it said “will be provided in full by the Spanish State”. The EUR19 billion funding comes on top of the EUR4.5 billion cash injection received some months ago.

The European Central Bank (ECB) however, refused to endorse the rescue plan, which includes using sovereign bonds and swapping these for cash at the ECB’s three-month refinancing window. The ECB said a proper capital injection was needed for the country's fourth largest banking institution. But on 30-May-2012 Spain’s Government denied reports that the ECB had rejected its plan and stated it would fund the Bankia rescue plan with cash raised through an auction of treasury bonds.

Meanwhile BFA-Bankia's new chairman José Ignacio Goirigolzarri has confirmed that he will “logically look to start a sale process” for the bank's group of holdings as part of the restructuring. European authorities and competition regulators typically require bailed-out banks to sell non-core operations in return for cash injections. The portfolio comprises stakes, among others, in NH Hotels (15.6%), electric utility company Iberdrola (5.4%), the property group Realia (27.7%), food company SOS and IAG.

Mr Goirigolzarri said detailed plans for selling assets would be presented to shareholders at a meeting on 29-June-2012. According to Estragias de Inversion, the hotel chain and IAG are earmarked for sale and the investment bank Lazard reportedly has already been retained to look for buyers.

BFA-Bankia is a historic – and safe – shareholder

BFA-Bankia became an IAG shareholder through the merger of BA with Iberia, in which it is a long time investor via Caja Madrid. Caja Madrid, which merged with six other local Spanish savings banks into BFA in late 2010, was one of Iberia’s core shareholders when the Spanish Government privatised its flag carrier in 1999. It obtained a 10% shareholding in the first phase of the privatisation (much to its annoyance, a joint platform of British Airways and American Airlines also acquired a 10% stake) and enlarged this to 23.45% when the airline was floated on Spanish Stock Exchanges on 03-Apr-2001.

At the time of its merger with BA, Caja Madrid was Iberia’s largest shareholder with just over 24%. This share was diluted to 12.09% when the merger took place in Jan-2012.

A European bazaar of airline stocks for sale

It is rare that such a large and potentially valuable block of equity in a major airline group becomes available, suggesting that there may be a wide range of potential suitors. Institutional investors will almost certainly be alert to the prospect and it would be unusual if BA/IAG were not discussing the possibility with some of its favoured potential partners. Another airline investment, with few exceptions, is likely to be more problematic, especially if it were a non-consensual buyer.

But then again, IAG is perhaps not the most attractive equity investment in the market, being first and foremost in the airline business as well as being largely rooted in a faltering Spanish economy.

And there is an exceptionally large portfolio of airline stocks on the market at present. TAP Portugal, LOT Polish Airlines and Aer Lingus are all available to the highest – or right – bidder.

These are volatile times for the European airline industry and the financial performance of European airlines is substandard compared to the results reported by peers in other regions such as Asia Pacific and the US, making the sector and IAG of limited attraction to investors. IAG reported a 1Q2012 net loss of EUR146 million and an operating loss of EUR212 million, a sharp deterioration on the year-ago period when it posted a net profit; and the full-year outlook is bleak. The Group expects its operating result to be “around the breakeven level” for the full year after exceptional items.

IAG would undoubtedly prefer the BFA-Bankia holding move into the portfolio of another, relatively neutral, financial institution or institutional investors, or pass it to “friendly hands” such as American Airlines Corp. AA is a oneworld partner and BA, Iberia and AA have a joint trans-Atlantic joint venture with ATI.  But American Airlines Corp in is Chapter 11, which makes it an unlikely candidate to invest GBP312 million in IAG.

Minority stakes in European carriers have recently drawn the interest of the Arabian Gulf carriers, with Abu Dhabi-based Etihad taking a 3% stake in Ireland's Aer Lingus and a 29% stake in airberlin.

Qatar Airways has a 35% interest in Cargolux International and was in talks with Spanair before it collapsed. Qatar Airways' CEO Akbar Al Baker has stated publicly he is examining more potential acquisitions in Europe, while IAG CEO Willie has hinted he might want to bring Qatar Airways into the oneworld alliance. A 12% stake by Qatar, which has the funds, in IAG and a oneworld membership seem a straightforward proposition.

There also could be some interest from Chinese carriers or institutions, but so far Chinese airlines have not ventured into equity stakes in European airlines. One possibility is that another oneworld partner, Cathay Pacific, could provide a useful bridge for Air China into the European marketplace. The current cross-shareholding between the two major Asian carriers makes for interesting speculation about Cathay's future alliance allegiances, but a very foxy IAG CEO Willie Walsh might well see Cathay as a relatively friendly option, with an intriguing backdoor into the massive Chinese market.

In this respect, the BFA-Bankia sell-down could actually become a strategically valuable option, if played right.

For Latin American airlines, focused on mergers in their own region, a shareholding in a European legacy airline is probably not high on their agenda, least of all with Spain staring down the barrel of perhaps years of recession, battling with failing banks and 25% unemployment.

A buyback by IAG of the shares currently held by BFA-Bankia is another option; Ryanair has done five buybacks in recent years. If a solution for BFA-Bankia is not found quickly and the bank nears collapse, IAG shares might descend even further, making a buyback a very cheap option. A freefall is perhaps a more unlikely outcome, as any airline with a long-term strategic outlook and short-term deep pockets would see this as a one-off opportunity. Even a deep-pocketed Russian group might see an IAG shareholding as more valuable than FC Barcelona.

For IAG, safety first is the low risk approach, but opportunities in adversity are not to be sniffed at

The financial difficulties of IAG’s main shareholder will not threaten BA or Iberia’s operations, but shareholder uncertainly is disconcerting for management – and for the other shareholders. Disputes between the two main shareholders provoked the near-bankruptcy of airBaltic; Ryanair's board attentions were most unwelcome for Aer Lingus; even the shenanigans with its largest shareholder were enough to rock easyJet for a couple of years; and the entry of Etihad in the capital of airberlin changed the latter’s strategic positioning into a full service carrier.

The "wise" heads in IAG will perhaps favour a low-risk buyback, or introducing a friendly institution. But at a time when the global industry is looking increasingly like the Mad Hatter's Tea Party, using the substantial shareholding to tie in a valuable strategic partnership could be just what IAG is looking for right now.