Gulf Air’s latest attempt at a turn around, launched in late 2012, appears to be quickly producing concrete results for the struggling Bahraini national carrier. The latest in a long line of revival attempts, the plan has dramatically downsized the Gulf’s oldest airline in an attempt to end the years of heavy losses.

At the end of 1Q2013, Gulf Air announced it achieved a 21% cut in overall costs during the quarter, crediting the improvement to a reduction in aircraft leasing fees, cuts to flight-related charges and staff expenses and the closure of loss-making routes.

Yields were up 21% year-on-year in the quarter, thanks to stronger traffic demand in the region and significantly higher sales in Bahrain, as well as its broader fleet and network restructuring. As a consequence, the carrier reported that losses in 1Q2013 were approximately half what they had been in 1Q2012.

The result is 11% better than the carrier’s restructuring plan called for, an encouraging sign that the pain associated with the reshuffle is worth it. The carrier has also been consistently amongst the most punctual airlines in the region, a dramatic turnabout from its operations a few years ago. Despite the improvement, Gulf Air has a long way to go before it can be said to be commercially viable.

According to the Financial and Economic Affairs Committee vice-chairman Abdulhakeem Al Shemri, Gulf Air has cost Bahrain approximately BHD1 billion (USD2.65 billion) over the past four years. The carrier’s owner, the national sovereign wealth fund, the Bahrain Mumtalakat Holding Company, attributed the majority of its 2011 losses of BHD270.1 million (USD717 million) to its ownership of the carrier. In 2009, Mumtalakat CEO, Talal al-Zain stated that the airline was an “unacceptable burden on the national economy” and existed only by the grace of government support.

The global financial crisis, the Arab Spring and the continuing social unrest in Bahrain have not helped the carrier’s restructuring efforts over the past several years. Traffic levels in Bahrain dipped significantly between 2009 and 2011, with Gulf Air hit harder than many of its regional peers. 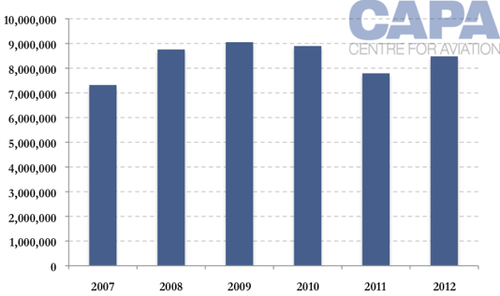 Traffic to/from Bahrain International Airport recovered 8.8% in 2012, but passenger levels have only just begun to return to their peak 2009 levels.

Regional competition has also been relentless. The hubs of the Gulf’s largest sixth freedom carriers – Emirates, Etihad Airways and Qatar Airways – are all within 500km of Bahrain. It also faces stiff competition from low-cost carriers such as Air Arabia, nasair and flydubai. The bankruptcy and liquidation of privately owned Bahrain Air in Jan-2013 has relieved a little pressure on the national carrier, although the failure is not positive for the market in general. 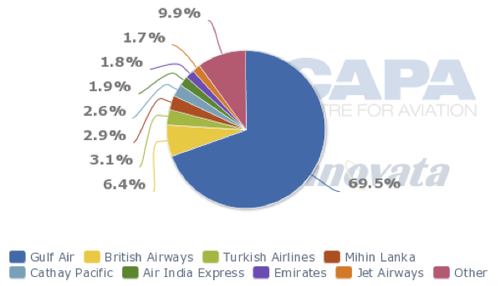 In late 2012, the Bahraini Government approved a BDH185 million (USD491 million) financial aid package for the carrier. While this was less than a third of the size of the support the carrier had been seeking, the funds come with conditions attached. Bahrain's parliament only approved the funds injection with the stipulation that the carrier took strenuous efforts to curb its losses and turn around its operations.

Prior to the funds injection, a number of options had been on the table for the future of the airline, including a sell off/dissolution of the carrier or the formation of a new carrier. Neither option was considered cost effective or politically justifiable, so a combination of downsizing and restructuring was chosen.

In Jan-2013, the carrier unveiled the “rightsizing” of its operations, announcing cuts to its fleet, network and workforce and the introduction of a new performance framework. Gulf Air announced targets of a 24% reduction in costs by the end of the year, as well as a 9% improvement in revenue per ASK.

The restructuring plan has seen Gulf Air cut its fleet from 36 to 26 aircraft, deciding on an all-Airbus fleet for the next few years. It has phased out its Embraer regional jets, and settled on a mix of A320 family aircraft for its Middle Eastern and medium-haul network. Six A330s have been retained to meet its long-haul commitments in Europe and Southeast Asia, as well as some high volume markets. Its average fleet age has been reduced to just 4.3 years.

In concert with this, Gulf Air dramatically cut back and re-aligned its aircraft order book, which cut its long-term financial liability of USD5 billion by more than half. The carrier’s order for 20 A330s was replaced with an order for eight A320ceo aircraft – all of which are now in service – and 16 of the updated A320neo aircraft, which are due to be delivered towards the end of the decade.

Its order for 24 Boeing 787s, long the subject of speculation, has been cut back to between 12 and 16 aircraft. The final number to be delivered will depend on the carrier’s “strategic requirements” towards the end of the decade. The 787s will be used to replace the A330s, as well as to open some new long-haul routes.

Along with the fleet restructuring, Gulf Air’s network has been slimmed down and realigned to focus on point-to-point operations. The carrier is concentrating on markets in the Middle East, where it operates one of the region’s more mature networks.

The Middle East accounts for almost two thirds of the airline’s seating capacity and just under 24% of its total ASKs. The business hubs of Dubai, Doha, Kuwait, Damman, Riyadh, Jeddah and Abu Dhabi are its most important regional destinations. 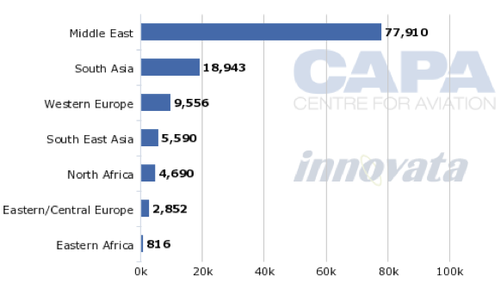 Gulf Air continues to operate to selected destinations in Europe, Southeast Asia and around the Indian subcontinent. In terms of ASKs, London Heathrow remains Gulf Air’s single most important destination, followed by Manila, Bangkok and then Delhi. 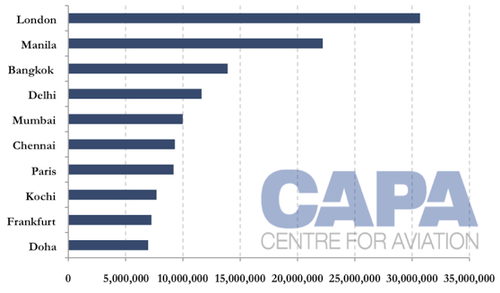 The airline closed eight “commercially unviable” routes in late 2012 and early 2013 and has slimmed down its network from 49 destinations to just 33. The network pull-back is not as drastic as initially proposed in late 2012, when the carrier was expected to cut its network to less than 30 routes.

European routes have been among the main victims of the restructuring. Geneva, Athens and Milan were all suspended in mid-2012, with Copenhagen and Rome following later in the year. The rest of the cuts have been more evenly distributed. Gulf Air pulled out of several South Asian markets, including Kathmandu, Dhaka, Colombo and Kabul. It has also suspended service to Nairobi.

In the Middle East, services to Aden, Basra and Erbil have been cut. Due to political disagreements and the security situation, Gulf Air has still not resumed operations to its four Iranian destinations, which had been among the carrier’s most profitable routes prior to the Arab Spring.

The turn around has not come without its troubles though, the chief among them is the carrier’s labour relations. The carrier is a major employer of Bahraini nationals and workforce cuts have proved a politically sensitive subject, particularly given the social unrest that is still prevalent in the country.

When the bail out was approved, Gulf Air stated its workforce would need to be “aligned to meet the operational, maintenance and administrative needs of the revised fleet and network.” It reportedly aims to cut up to 1,800 staff under the restructuring. The reduction is being carried out via a combination of non-renewal of contracts, natural attrition, the introduction of a voluntary retirement scheme and the closure/restructuring of outstations.

By the end of Feb-2013, the carrier had chopped its headcount back by 15%, without revealing firm numbers. At the same time, the airline’s ‘Bahrainisation’ levels at its head office reached a record high of 85%. The carrier had reported an overall ‘Bahrainisation’ level of close to 60%, with a stated goal of increasing this to 75%. While this is hardly an adequate criterion for improved efficiency, it is a political necessity.

The carrier’s two main unions – the National Trade Union of Gulf Air (NTAGU) and the Gulf Air Trade Union (GATU) – have been vocally dissatisfied at the scale of job cuts under the plan, as well as by the way they have been carried out. Despite Gulf Air's commitment to conducting the rightsizing in a “fair and transparent manner” and “continuing to be a key employer committed to developing a national workforce of aviation professionals”, the GATU has formally rejected the workforce reduction plan. It has called on Gulf Air and the Bahraini lawmakers to secure jobs for nationals, accusing the airline of forcing some Bahraini nationals to take the voluntary redundancy packages.

It's hard to run an airline by parliamentary vote

The cuts at Gulf Air have been so contentions that at the end of Jan-2013, the Bahraini Parliament voted to temporarily freeze redundancies at the carrier, to protect the positions of Bahraini nationals. The parliament also put a stop to early retirements at the airline, forcing Gulf Air to offer larger payouts and better benefits to Bahraini nationals who had chosen to leave the carrier. The parliament has also recommended the hiring of around 100 Bahraini pilots, despite the fleet and network reduction.

As dissatisfaction with the restructuring has built up, so have threats of strike action. Despite meetings involving union representatives, the carrier’s management and Bahrain’s Ministry of Labour to outline the nature of the restructuring, unions have been directly petitioning the Ministry of Labour and Parliament to halt the workforce rightsizing. Strike action has been put forward as an option by the GATU, but so far the unions have refrained from any concerted industrial campaign.

Gulf Air has acknowledged that cutting its workforce is a difficult and politically unfavourable option, but it simply cannot reduce its losses without workforce reductions. The downsizing will continue as part of its restructuring process, but the reaction of unions and politicians remains unpredictable.

A brighter future for Gulf Air, but still a long way to go

Gulf Air intends to emerge from 2013 a much leaner and more commercially viable carrier, although losses are expected to continue in the interim. Given its prominence and its importance to Bahrain as an instrument of national policy, its restructuring and financial rehabilitation is a politically sensitive issue.

Both the Bahrain Government and the Bahrain Mumtalakat Holding Company are adamant the turn around will follow commercial principles, although the Bahrain Parliament has tended to use the carrier as a political football and seemingly cannot resist interfering. The workforce rightsizing is due to be completed before the end of the year, although union intransigence and political interference may mean it takes longer.

The process is moving Gulf Air’s performance in the right direction, but outside national borders too the airline faces an unenviable competitive position. Compared to its regional rivals, its cost base is still very high and its product, although much improved, still requires further enhancement. It still cannot compete with either the large regional full-service carriers or the fast expanding low-cost airlines, so is striving to find its own niche. Even the exit of Bahrain Air from the local market – as much a victim of politics as Gulf Air – will do little to improve its position.

2013 will be a year of major challenges for Gulf Air, but if it can realise all three of its goals, it will have a solid platform to build on. After a decade of increasingly heavy losses, the airline desperately needs to remedy its ills, if only to stop the haemorrhaging of government money. The most recent plan to resurrect the airline is comprehensive, but it remains to be seen whether the institutional and structural problems at the carrier can be solved in the long term.