Bahrain to continue to back Gulf Air, but carrier may emerge radically changed

Gulf Air will continue to fight another day. After months of uncertainty over the outlook for the carrier, the Bahrain Government and the National Assembly have agreed to invest additional funds to keep the carrier afloat, according to a report in the state-run Bahraini News Agency. However, even if it does get the funds, Gulf Air may emerge from its latest bailout package a radically changed entity.

At a meeting involving Bahrain’s Deputy Premier, Finance Minister, Transport Minster and the heads and chairmen of parliamentary blocs and committees and members of Financial and Economic Affairs Committees this week, it was decided that Bahrain will continue to provide long-term financial support for the airline. The Shura and Representatives councils – the two chambers of the National Assembly – have informally agreed to a Bahraini Government request to pump additional funds into the airline to allow it to settle some debts and dues.

Earlier this year, legislation for a BHD664.3 million (USD1.76 billion) bailout for the airline was rejected by the Shura Council, the lower house of the National Assembly. The council felt that the size of the package was exorbitant and another major overhaul was required for the airline before it would commit to a further round of financing. A committee on the future of the carrier was formed to review its financial position as well as its strategic options as the national carrier for Bahrain and as part of the larger Gulf aviation market.

At the time, Bahraini lawmakers put forward a number of proposals for the future of the airline. These included a wholesale replacement of upper management, a new restructuring effort, an alliance with one or more local or foreign carriers or even completely dissolving the airline and founding a new national carrier. Gulf Air was also urged to seek a partner or strategic investor to allow it to compete more effectively with other regional carriers.

According to Shura Council Financial and Economic Affairs Committee chairman Khalid Al Maskati, the BDH664.3 million bailout package has now been reduced to BDH185 million (USD490 million), a reduction of about two-thirds. Approval of the funds will only be granted once the two houses of the National Assembly have made an examination of the funding request.

A vote to approve the package is expected by the end of Oct-2012, when the parliament returns for its third legislative period of the year. According to Gulf Air CEO Samar Majali discussions between the executive branch and the Shura Council are expected within weeks of the parliament reconvening.

The announcement in the state media noted that the Shura and Representative councils will work with the Bahraini executive branch regarding the challenges facing Gulf Air and will “work out radical and lasting solutions to its problems, for the benefit of the kingdom and its citizens”. How radical the changes will be have not been formally announced.

Multiple management shake-ups and restructuring attempts have been tried since Bahrain took over the carrier in 2007, but they have still not managed to stem the tide of losses.

A report in the Bahraini daily Gulf Daily News indicates that the carrier will emerge from the bailout significantly slimmed down and with a shift in strategy.

Gulf Air will reportedly cut its fleet from 39 to 20 aircraft and shrink its network to 31 destinations, down from 49 at present. There will be commensurate reductions to the carrier’s workforce, with the airline reportedly set to cut up to 1,800 of its 3,800 staff.

Also mandated will be a ‘Bahrainisation’ level of 76%, which would require the carrier to let go of a high proportion of expatriate staff. In Apr-2012, the carrier reported 56% of its workforce were Bahraini nationals, the first time the figure had exceeded 50%.

The carrier will slim down its European network in favour of concentrating on the Middle East and Asia. After the Indian subcontinent, Europe is Gulf Air’s second largest market in terms of ASKs. 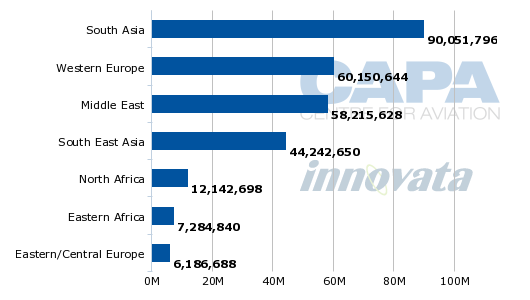 At present, Gulf Air operates to Copenhagen, London, Paris, Frankfurt, Rome, Larnaca and Istanbul. The airline will reportedly preserve London Heathrow and Paris as European destinations, but will let the others go.

Of the other five European routes likely to be axed, only Bahrain-Istanbul is currently served by another carrier. Some of these routes, however, could be picked up if Gulf Air drops them, potentially with support from Gulf Air. On services to Larnaca, Gulf Air has a long-standing codeshare with Cyprus Airways, which could be persuaded to launch its own flights on the route if Gulf Air ends up pulling out of the market.

Gulf Air’s European operations have already undergone one pruning this year. In 1Q2012, the carrier ended its services to Geneva, Athens and Milan, to concentrate on higher-yielding routes in the Middle East and Africa.

The carrier this year has added capacity to routes across the Middle East, India, North Africa and East Africa. It has also received permission to resume services to Iran and Iraq, both lucrative markets that it has been shut out of for more than 18 months.

Cutting most of its European destinations will leave Gulf Air with only a slender sixth-freedom long-haul offering market. Outside of the Indian subcontinent, the carrier’s only Asian destinations are Bangkok and Manila, after it ended Kuala Lumpur service during Mar-2012. The carrier serves the US market via a codeshare with American Airlines, primarily via London Heathrow.

Where the other route cuts will come is uncertain. Gulf Air has an extensive Middle East regional network of 20 destinations. It also serves 11 destinations in the Indian sub-continent and has a small network in East Africa.

Losses at the carrier in 2011 were reportedly BHD95 million (USD250 million), thanks largely to the local political unrest and the regional geo-political situation. These saw the carrier shut out of the Iranian and Iraqi markets, in addition to wider externalities such as the global financial situation and the high price of oil.

Losses are expected to be heavy in 2012, although not on the same scale as in 2011. The carrier has already announced it is targeting a 15% reduction to its cost base this year, after cutting unit costs by 12% in 2011.

The overall objective is to cut the heavy losses that the carrier has sustained. According to the Gulf Air temporary committee chairman Abdulhaleem Murad, the carrier has lost approximately USD2 billion since 2007.

The bail out plan reportedly envisions the carrier cutting its losses from BDH95 million to BHD58 million (USD154 million) by 2017, a recognition of the realities facing the carrier. Even a slimmed down and refocused Gulf Air faces a comparatively weak competitive position against most of its Gulf region rivals.

Also covered under the bail out will be the recovery funds owed to Gulf Air by the Omani government, following its pull out of the carrier in 2007. The carrier’s owner and national sovereign wealth fund, the Bahrain Mumtalakat Holding Company, has reportedly been instructed to secure BHD117 million (USD310 million) owed by Oman to the carrier.

To help turn around its operations, the carrier has increasingly focused on its strong regional connectivity and Gulf market operations. The airline has been shifting towards a narrowbody-focused fleet. In mid-2011 it abandoned eight of the 24 Boeing 787s it had on order and has reportedly cancelled some or all of the 20 A330s it has on order.

Gulf Air has also been attempting to cash in on the MRO boom created by the swelling commercial aircraft fleet in the Middle East. The airline announced in Feb-2012 it was launching a separate MRO division and plans to develop a major MRO entity that will not only take care of its own maintenance but also handle MRO for other airlines, making Bahrain an aviation MRO hub in the region. It followed this up by in-sourcing its fleet technical management in Jun-2012, a move that the carrier believes will allow it to cut costs, improve its MRO competencies and achieve technical self-sufficiency.

A slimmer Gulf Air, but still in the picture

The announcement in the state media stressed the necessity of keeping Gulf Air afloat, given its “importance regarding mainly economy, tourism and investment and essential role in promoting the kingdom's reputation at the regional and global levels.” Closing Gulf Air down is not an option for Bahrain.

The Shura and Representative councils affirmed the “need to keep Gulf Air as one of the basic pillars of the national economy as it links the kingdom to the rest of the world and provides job opportunities for Bahrainis in many specialties”.

While the big three airlines of the Gulf have been busy dealing with rapid growth and re-aligning the global aviation system, Gulf Air is being forced to concentrate on digging itself out of a deep pit of trouble. The oldest and once dominant carrier in the Gulf now finds itself reduced to the second tier, seeking out under-served and niche markets that are under the radar screen of its bigger competitors. Given the competitive situation in the Gulf and the carrier’s own internal difficulties, this has not been an easy task.

Radical diets for airlines have been tried in the Middle East, most recently with Jazeera Airways that slashed its fleet, network and staff and turned itself around in a little under 15 months. However, as a national carrier, Gulf Air doesn’t possess anything like the strategic flexibility that the small, privately held LCC enjoys.

Gulf Air has several strategic options open to it. For example, a merger with local competitor Bahrain Air is reportedly under serious consideration. Bahrain Air currently accounts for about 9% of total capacity in the country, compared to 58% for Gulf Air.

The two carriers now compete on major regional routes and to several destinations in India (as well as to one destination in Africa). As Gulf Air restructures to focus more on point-to-point regional traffic the competition with Bahrain Air could intensify. 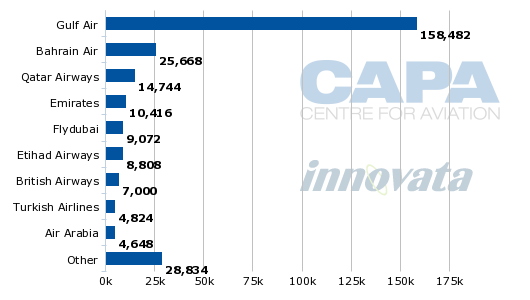 Gulf Air also has been seeking entry into a global alliance, but so far it has been unable to drum up interest from any of the three alliances and its chances seem remote as the carrier continues to shrink in size. Interest is also unlikely given the recent accession of Saudia and Lebanon’s Middle East Airlines to Sky Team and the pending membership of Qatar Airways into oneworld.

For the moment, Gulf Air’s operations will continue normally, and the carrier’s “near-term” plans are unaffected, according to a statement put out by the carrier.

Cutting the size of the national carrier by around 50% is plainly going to hurt Bahrain. Reducing the fleet to 20 aircraft will make it one of the smallest national carriers in the region. Given the social problems extant in Bahrain, cutting jobs at the carrier is a difficult move politically and downsizing the airline will have ripple effects through suppliers. Unions are clearly worried by the plan to slash the workforce and have demanded meetings to discuss the plan. However, the pain from the resizing cannot be worse than letting the carrier continue on its present course struggling to survive while the rest of Gulf aviation surges forward.