Gol pledges a financial turnaround as it records a second consecutive annual loss, of USD745 million

Brazil’s second largest carrier Gol was unable to turn its fortunes positive in 2012 and actually widened its loss for the year. Despite its attempts to combat the cooling Brazilian domestic market through marked capacity cuts and turning some of its attention to international services, Gol recorded a BRL447 million (USD222 million) loss for 4Q2012 and a BRL1.5 billion (USD745 million) negative result for the full year.

Gol believes the changes it has made with respect to its domestic supply and various cost-containment schemes should produce a positive operating result for 1Q2013. But the carrier made similar pronouncements during 2012 as it recorded four quarters of unprofitability, so the pressure is mounting on management to put some grit behind a pledged turnaround.

Unlike its major rival TAM, which is now part of the powerful LATAM Airlines Group, Gol does not have the benefit of large network to help it diversify from areas of weakness to more robust regions. Both Gol and TAM during 2012 had to combat softening demand that resulted from Brazil’s slowing economy. During 2012 GDP growth in Brazil was revised down to 2% from 4%, and during 2013 Gol is projecting growth of 2.5% to a maximum of 3%. This compares to GDP growth of approximately 7.5% growth in Brazil during 2010.

The familiar problems Gol discussed throughout much of 2012 – rising fuel costs, currency fluctuations that resulted in a 17% devaluation of the BRL against the USD, a roughly 30% rise in airport fees and modest GDP growth – continued to plague its 4Q2012 and full-year 2012 results as its operating losses for 4Q2012 plummeted 954% to BRL358 million (USD177 million) and 270% for the full year 2012.

The airline recorded a negative 17% operating margin for the last three months of 2012 and a negative 11% for the full year.

Some of Gol’s negative results were attributed to added costs of BRL197 million that stemmed from the shuttering of Webjet, a regional carrier Gol purchased in 2011.

As of 25-Mar-2013 Gol stated three of Webjet’s 13 remaining leased -300s had been returned to lessors and the 10 remaining on lease should be returned by the end of 1H2013. Gol stated the sale of six of the aircraft is currently under negotiation.

Capacity cutting leader in Brazil, reducing by 5.4% in 2012 - towards sustainability

In an attempt to ease the effects of slower demand in Brazil Gol throughout 2012 continually revised its domestic capacity estimates and ultimately cut domestic supply by 5.4% for the year, eliminating 130 unprofitable flights from the combined Gol-Webjet network.

During a 26-Mar-2013 earnings discussion Gol management declared the company was the capacity-cutting leader among Brazil’s largest carriers as domestic supply at Gol during 2012 fell 5.4% compared with a 1.1% cut at TAM and 32% growth at Azul and TRIP, two carriers in the process of merging.

But Gol highlights that even Azul and TRIP, which have been growing rapidly during the last few years, began to moderate their growth beginning in the Mar-2012-Apr-2012 timeframe, which helped to drive just 2.7% ASK growth in Brazil’s domestic market, a marked decrease from previous years.

Gol’s management is encouraged by the slower domestic capacity growth, as CEO Paulo Kakinoff remarked, the capacity discipline introduced in the domestic market is an “important sign that Brazil’s airline industry is underway to constructing a more sustainable environment”. 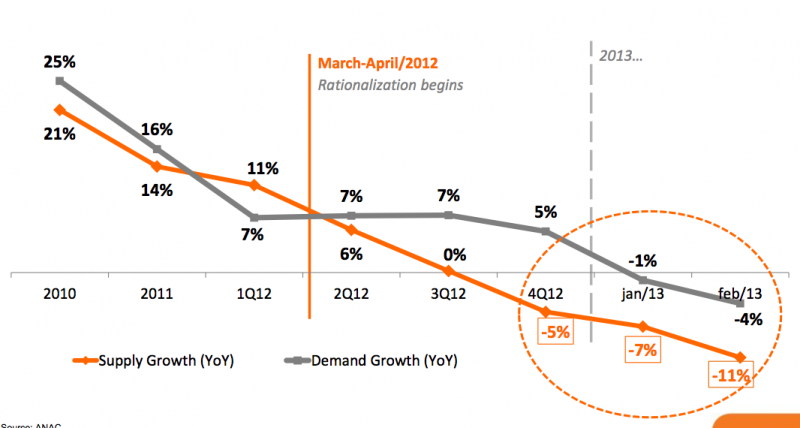 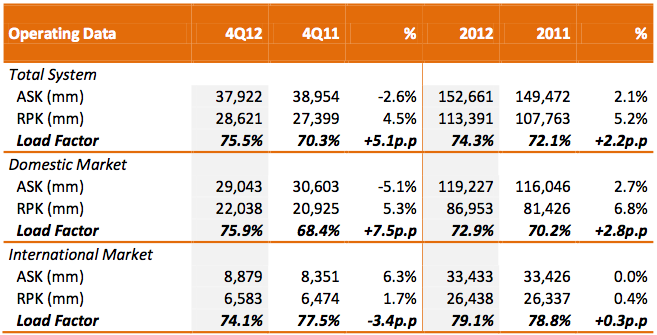 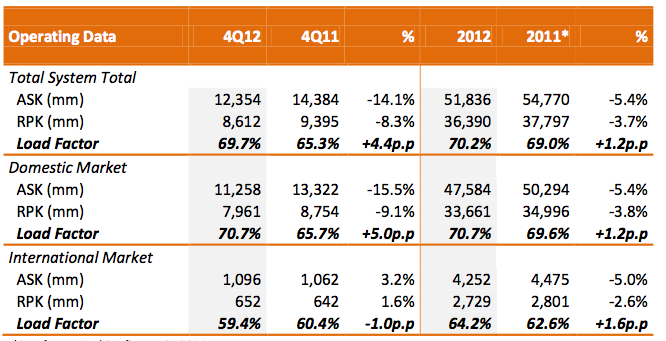 Gol believes its prudent capacity management helped to lay the foundation for a more stable environment in Brazil during 2012 as its yields began to stabilise during 3Q2012 as capacity rationalisation set in.

Gol's yields improved - but less than costs, inflated by the Webjet grounding

Its unit revenue growth also began to grow year-over-year in 2Q2012. But the improvements did not cover the run-up in Gol’s unit costs, which excluding fuel and the charges related to the grounding of Webjet’s fleet increased roughly 16% during 4Q2012, and 10% for the full year 2012.

Gol estimates revenues from its buy-on-board programme jumped 145% year-over-year during 4Q2012, and food for purchase is presently offered on about 50% of the carrier’s flights.

Gol has taken measures to reduce its unit costs including a 15% reduction in its workforce (including Webjet), the grounding of Webjet’s less fuel-efficient 737-300s. Some network changes that include improved connections could also contribute to cost reductions as a result of potential improvement in turnaround times. Its championing of remote check-in, which reached a rate of 12% during 2012, should also deflect some of its airport staffing costs.

During the first two months of 2013 Gol appeared to be reaping some benefits from its own capacity discipline and the overall reigning in supply in the domestic market place. Its yields grew 8% year-over-year in Jan-2013 and 17% in Feb-2013.

Mr Kakinoff buffered some of those projections by stating that the larger macroeconomic environment remains uncertain, and that if Brazil’s GDP is lower than projections, then Gol may need to revise its current revenue and cost guidance for 2013.

Gol is setting the bar high for a rebound, and will have far to fall if it fails

Gol’s aggressive capacity cutting during 2012 relative to its peers did result in the carrier ceding market share to Avianca Brazil and Azul-TRIP, as Gol’s share of domestic traffic (including figures from Webjet) fell 4ppt year-over-year to 39%; meanwhile Avianca Brazil saw its share jump from 3% to 5% and Azul-TRIP recorded a 3ppt increase from 3% to 5%.

TAM’s share remained flat year-over-year at 41%. Capacity cuts at Brazil’s largest carrier were not as deep as the reduction at Gol. TAM cut its ASK growth to about 1.1% year-over-year in 2012, but increased traffic by nearly 6%, which allowed it to raise its load factor by about 5ppt to 73.6%.

Despite putting specific numbers behind its pledge of an improvement in unit revenue and costs during 2013, the reality is that Gol faces the same problems that triggered the weak performance it turned throughout 2012 – high fuel costs, uncertain demand and currency issues. The carrier has made some effort to diversify its network outside of the Brazilian domestic market, primarily with service to Miami and Orlando in the US during late 2012 through a one-stop service in Santo Domingo, Dominican Republic.

Gol is hoping to capitalise on better demand, and presumably better yields, that international service to the US can deliver, but rival TAM and the largest carrier between the US and Brazil, American Airlines, each offer direct service between Brazil and Florida, without the stopover.

Gol’s current schedule on its flights to the US also doesn’t allow for connections onwards to its more extensive domestic network, and there are no connection opportunities for Gol in the US beyond Miami and Orlando. But it seems as if Gol will attempt to stick it out with its less than ideal US-Brazil offering as the carrier declined to offer system-wide capacity guidance for 2013 due to its negotiations to increase its routes operating over Santo Domingo, company officials explained.

With TAM now firmly entrenched in LATAM and the joint company’s keen focus on maximising network value, TAM is in a better position to successfully weather any further deteriorating economic conditions in Brazil since its aircraft operating within the Brazilian domestic sphere can be redeployed elsewhere. For that reason Gol is less shielded from the effects of its smaller domestic competitors that, despite slowing their historically rapid growth, will still continue expanding capacity.

Gol faces a tough climb during 2013 if it is to rebound from a dismal financial performance during 2012. For the moment the number of sceptics of its plan are likely to outweigh the believers as the circumstances that drove the carrier deeply into the red remain largely unchanged.

While Gol’s management assures improvements are underway, and the costly Webjet rationalisation is mostly out of the way, the carrier is placing its faith for a rebound in continued prudent capacity management.

Gol’s plan is only executable if capacity rationalisation in Brazil continues. The prospect of continued sensibility in the domestic market place is as difficult to predict as a time period of when Gol will return to consistent profitability.