GoAir, India’s smallest airline by market share and fleet, has become the latest Indian carrier to announce a large aircraft order, for 72 A320neos ahead of the Paris Air Show. The order, valued at USD7.2 billion at list prices, brings GoAir’s total order book with Airbus to 92 aircraft valued at USD9.6 billion. The agreement will be confirmed at the Paris Air Show next week.

The order will support the carrier’s expansion in the fast-growing Indian domestic market, which has emerged strongly in the aftermath of the global financial crisis. It also signals GoAir’s intention to compete on a more level playing field with its larger LCC rivals such as IndiGo and SpiceJet. GoAir, which operates just 10 aircraft at present with an average fleet age of just over two years, has labelled the A320neo order as a “game-changer”.

The carrier will start to receive the A320neos at a rate of 12-15 aircraft p/a from 2015. The carrier may in due course need to order additional aircraft to replace equipment as it ages. The fleet acquisition would be funded through a “mix of equity and debt” although the carrier did provide details.

The GoAir order is the third large order placed by an Indian LCC in the past six months and the second largest aircraft order in India.

It follows SpiceJet’s order for 30 B737-800s and 15 firm orders and 15 options for Q400s, and IndiGo’s record order for 180 A320s (including 150 A320neos), which is expected to be firmed up at Paris, according to Airbus Sales Chief John Leahy. The orders have been driven by a rapidly expanding economy and air travel market. Strong GDP growth, a young population and the expansion of India’s vibrant middle class are expected to see India achieve some of the fastest growth of any aviation market in the world over the next 20 years.

Jet Airways is also expected to make an order at the Paris Air Show this month, reportedly covering 10 A330s valued at around USD2.5 billion.  Air India, meanwhile, is planning to take 10 A330s and 16 A320s on a rental basis, according to reports in The Economic Times.

These large orders will provide a further influx of capacity for the nation’s LCCs, which are expected to more than double their fleet capacity based on current orders. The nation’s carriers currently have 315 aircraft on orders, excluding the recent GoAir and IndiGo orders, supplementing an existing fleet of 403 aircraft.

India’s current and future fleet: as at Jun-2011

* does not include latest order

India’s aviation sector has undergone rapid transformation since the liberalisation drive that began in 2003. India’s Civil Aviation Secretary Dr Nasim Zaidi last month forecast that the country is poised to emerge as the third largest aviation market in the world by the end of this decade. He further said that huge potential in this sector is yet to be tapped. At present, less than 2% of India’s 1.2 billion population travels by air, pointing to significant growth potential over the next three to five decades.

Mr Wadia also noted the huge potential in the market. Given an example of the future growth opportunities, he noted that the India aviation industry sold 54 million seats in 2010, as per data from the Directorate General of Civil Aviation. Comparatively, Ryanair sold 65 million seats in the same period.

“In terms of aircraft, we see tremendous potential in India, which has barely six airlines with 350 aircraft catering to a billion people, compared to China’s present 1,100 aircraft. With all the present orders placed by Indian carriers, we would only reach 1,100 aircraft by 2020. South West, a domestic airline in America, already has close to 700 aircraft. So the potential for growth in Indian aviation is huge,” MD Jeh Wadia said. “With India’s GDP growing at a brisk 8%-9% per annum, we see a great future ahead for the aviation sector, including GoAir. Our strategy is to fly those who currently don’t fly,” he added.

Regarding funding, Mr Wadia stated the carrier is “evaluating various fund-raising options (for the aircraft acquisition). It will be a combination of debt and equity”.

Last month, Reuters reported that GoAir was planning to raise around USD150 million through an IPO to fund its operational expenses, repay debt and acquire new aircraft.  Announcing the latest order, Mr Wadia however was quoted as saying that there “are no immediate plans to raise funds or an initial public offering (IPO)”. “We will evaluate fund raising later. We are fully self-sufficient for funding the fleet acquisition,” he added. He continued: “GoAir is a 100% family-owned company and we would not be using funds from any other listed entity of the Wadia group”.

To remain focused on domestic market

GoAir plans to remain focused on the domestic market, with the carrier, unlike its LCC peers, having no plans to operate internationally. However, CAPA believes that as the carrier develops a longer term plan, it may consider shorthaul international services, although not in the near term. Similarly, GoAir may also evaluate the induction of regional aircraft in time.

“Going forward, we will roll out in cities where we don't serve today, such as Tier 2 and 3 towns. I am more looking at opportunities in India. At present, I do not have aspirations to fly overseas. On the contrary, we are working out a new network expansion strategy to tap tier II and tier III cities,” Mr Wadia said. The carrier will particularly focus on “growing in the southern region”.

Mr Wadia also said the international market already has a number of players offering competitive rates and entering it would mean a “blood bath”. “The amount of competition we will face outside India is huge. There are many low cost carriers operating in the Middle East and South Asia, who will immediately drop fares if we announce entry,” he said.

Despite the rapid growth, Mr Wadia maintains that GoAir will be targeting “market share but profitable growth”. He added that he expects fares in the market to increase by 10-15% in 2011, due to the favourable environment for the industry. He also noted that improved airport infrastructure has been beneficial for the nation’s airlines. “Earlier, a plane used to take 2.35 hours to complete the Mumbai-Delhi route because of congestion, burning extra fuel. Now, there is an 18% improvement in the same. This is a huge saving,” he said.

GoAir is largely focused on connecting metro routes such as Delhi-Mumbai, the carrier's largest route, Bangalore-Mumbai and Delhi-Bangalore. 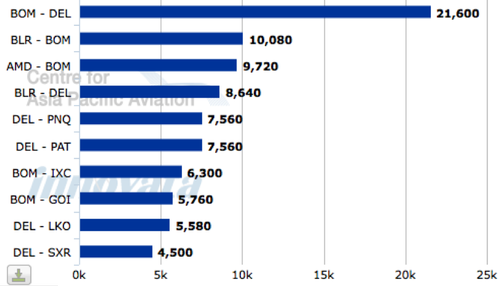 GoAir currently operates to 18 domestic destinations with 931 weekly services. The carrier will also continue with its flexible fleet programme, wherein it leases four to six aircraft for a few months every year. The carrier also plans to introduce more red-eye flights, as the carrier targets passengers who otherwise travel by train on 10-15 hour journeys. “Our idea is to target bus and train travellers by offering lower fares.”

Profitable at net level for past two years

Mr Wadia stated GoAir is now EBITDA positive and has been profitable at a net level over the past two years and at an operating level for longer. He added that the carrier posted a 61% increase in revenue in the last financial year. “Profit after tax was up by 7%, operating margin up by 15.7% and operating profit up by 13.7%,” Mr Wadia said, without giving actual figures.  Of the three listed carriers, only Spice Jet was profitable last year, with Jet Airways and Kingfisher Airlines posting losses.

GoAir grew modestly in FY2008/09 and FY2009/10, a strategy which served it well during the global financial crisis. However, remaining relatively small is no longer an option in light of the growth dynamics of the market. GoAir was expected to report a full year profit of INR675 million (UDD15 million) for FY2010/11 however due to the impact of Q4 CAPA estimates that the final result will now be around INR450 million (USD10 million). The improvements in operating and commercial performance are expected to continue and CAPA estimates that the carrier will post a full year profit of USD18-20 million in FY2011/12.

The carrier, as it expands, will see an increased operating cost base, not only due to increased financing costs, but as it hires more pilots, crew and ground staff in concert with the increase in its fleet. “For each aircraft we will hire five sets of pilots and five sets of cabin crew,” Mr Wadia said. This in itself is a challenge, due to a shortage of trained manpower in the sector. “We are figuring out how to face the challenge of having trained pilots. We may set up a common training facility with a flight simulator. We need to work together as such a machine needs to run 16 hours a day to be profitable,” CEO Giorgio de Roni said.

Mr De Roni is GoAir’s recently appointed CEO and a the former chief revenue officer at  Air One Aviation. He replaces Kaushik Khona who will move to a new role within the Wadia Group. Mr Wadia noted that Mr Khona is a “group resource and he will head back to assist in other businesses in the group."

The top management reshuffle coincides with the aggressive expansion plan, as the company aims to achieve a pan-India presence by adding more aircraft. Mr De Roni said he is no stranger to aggressive growth. “When I joined Air One, it had just 10 planes. When I left, it had 64 planes. So I am ready to lead an aggressive growth path,” he said.

Mr Wadia stated the carrier selected the A320neo as “we felt that it's the best aircraft of the decade". He added that the aircraft would offer a "substantial amount of savings, especially in India where fuel is so expensive".

Airbus expects to have more than 500 A320neo orders by the end of the Paris Air Show, reaching the milestone about seven months after committing to the aircraft type. The A320neo, due to enter service in 2015, will be 15% more fuel-efficient than current aircraft, according to Airbus. It will have a choice of engines from United Technologies' Pratt and Whitney and from CFM International.

GoAir will decide by 2012 whether to select the Pratt & Whitney or CFM engines for the new aircraft. “Till a few weeks ago Pratt & Whitney engines were better, but CFM is developing new engines with better technology…we may opt for that,” new CEO Giorgio de Roni said.

GoAir: Moving ahead with aggressive intent

As previously noted by CAPA, GoAir has been the surprise performer of the year. Under outgoing CEO, Kaushik Khona, stability and consistency has been brought to the airline. Service levels have improved significantly, a fact that has been recognised by passengers and is reflected in improved load factors and yields. Following this focus on service and people issues, GoAir is now taking the next step, moving ahead with its fleet and network expansion. As it grows the airline must ensure that it maintains discipline on costs and yields which has been key to their recent turnaround.