In 2004 the earthquake and tsunami wrought havoc with the northwestern part of Indonesia. Just down the coast from the worst-affected province in North Sumatra is Medan, Indonesia’s fourth largest city.

The government has long intended that the island of Sumatra should receive special attention and there are good economic reasons to do so, particularly the oil and gas business in the Aceh province to the north.

Medan has the main airport for the region, one of 50 million people in all, and earlier in 2021 it was announced that PT Angkasa Pura II, one of the state airport operators, was seeking a strategic partner to develop the airport into a ‘western hub’ for Indonesia.

Now that partner has been found, and it is India’s GMR Airports.

'Hub' should really be interpreted as ‘gateway’ here, because it isn’t easy to envisage what it would be a hub for, or which airlines are going to help it achieve that goal. But the airport does have a sound infrastructure in place with an ‘airport city' to be added to it.

India’s GMR Airports Limited has won a bid to develop and operate Medan Kualanamu International Airport in Indonesia. The company will work with the state operator Angkasa Pura II on a 49:51 partnership basis, with the intention of transforming the airport into a western international hub for Indonesia.

Medan is the capital of the North Sumatra province, and one of the four largest cities in Indonesia. It is also the closest major city to Aceh province, which was devastated by the 2004 Indian Ocean earthquake and tsunami.

Location of Medan in North Sumatra

The project scope includes the operation, development and expansion of the airport over a period of 25 years. A letter of award is expected to be issued shortly, after the bid formalities, with the signing of project agreements expected before the end of 2021.

GMR Group chairman energy and international airports Srinivas Bommidala stated that the project marked the entry of GMR Airports into a "fast growing Indonesian Aviation sector – the largest in ASEAN and a high potential market".

The potential for this airport and its private sector operator has previously been examined in a CAPA report.

In that report it was revealed that PT Angkasa Pura II (APII), one of the two state-owned operators of Indonesian airports, was seeking a strategic partner to turn Medan’s airport into an international transit hub.

The airport serves a region of 50 million people and “handles approximately 10 million passengers annually” according to APII. It was actually just shy of eight million in 2019, which is the last year with any sense of what had been normality.

The scheme is part of a “Masterplan to Accelerate and Expand Economic Development in Indonesia”.

But the report concluded that there is insufficient international passenger traffic, that the existing airlines are not the ones best suited to developing a hub, and that some aspects of the anticipated partnership might put foreign companies off.

GMR still a force to be reckoned with

Having suffered from some financial issues and undertaken administrative reorganisation, the GMR Group is not perhaps the force it once was in the airports sector, but it retains the ability to win contracts of this order.

Currently, it is involved in the operation of four airports in India, including Delhi’s Indira Gandhi International Airport, the main gateway; also two airports in the Philippines, Mactan Cebu and Clark International, in addition to this new contract. 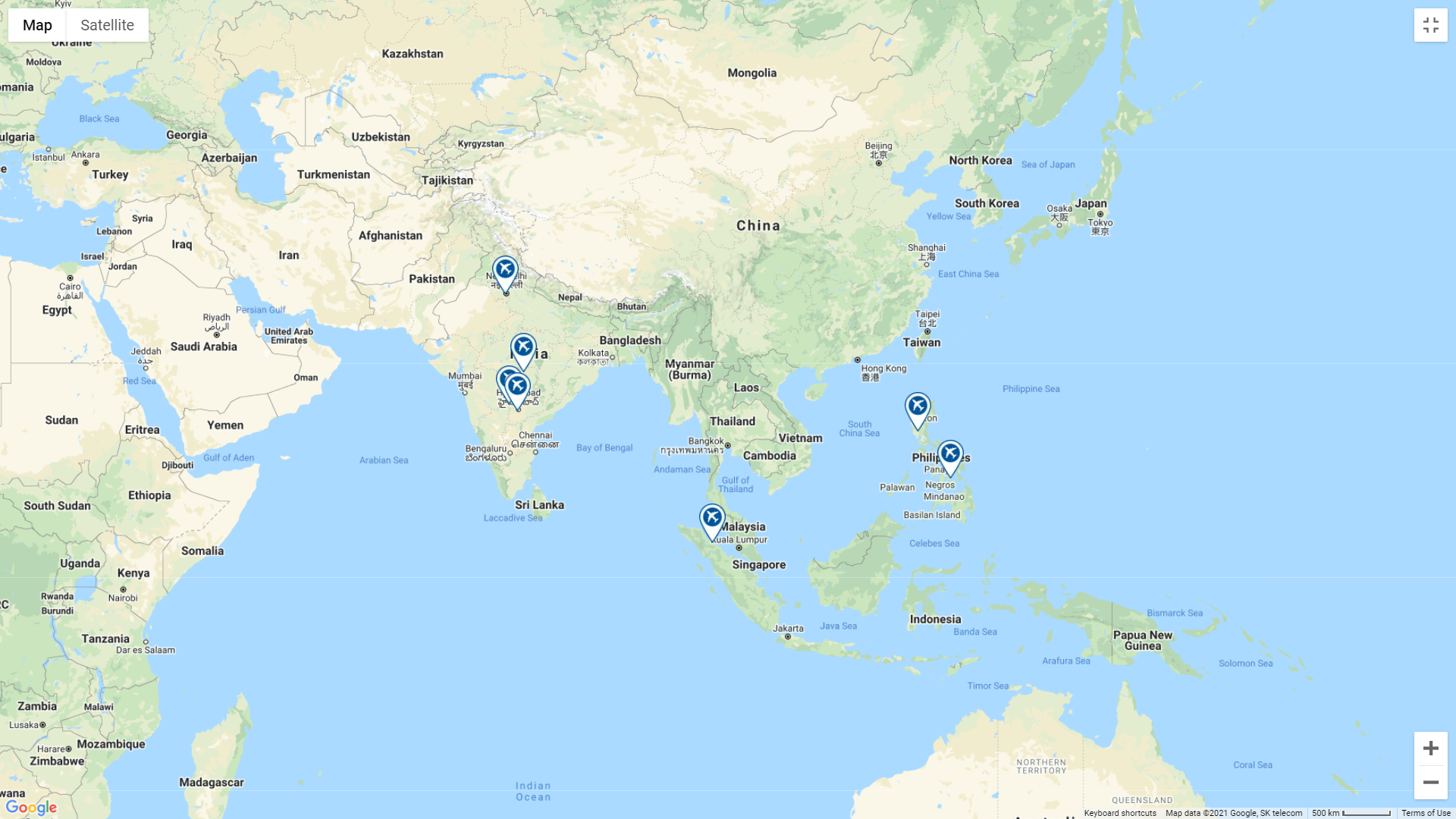 In India GMR has been embroiled in a dispute over the concession of Nagpur Airport.

In late 2018 GMR Airports won a tender to operate and improve Nagpur Airport under a 30-year concession contract, but Mihin India Limited terminated the tender in early 2020.

In Aug-2021 GMR Infrastructure announced that the Nagpur Bench of the Bombay High Court had directed Mihin India Limited to withdraw the termination of its contract with GMR Airports for the operation and management of that airport and to proceed with plans to sign a concession agreement with GMR Airports within the next six weeks.

The previous month GMR Group had signed an industrial partnership agreement with France’s Groupe ADP to establish "an unparalleled airport alliance in the world that builds on the combined experience of ADP and GMR of handling more than 325 million passengers annually".

Together with a concession agreement with Andhra Pradesh's Government in Jun-2020 to develop and operate the new Bhogapuram Airport under a 40-year contract (not on the map above), and a contract to build and operate a new airport in Crete within a consortium (also not on the map), a scaled-down GMR has a lot on its plate already.

But it remains quite capable of handling this sort of contract in addition, by way of its experience at the Delhi and Hyderabad airports in particular.

The ability to tap into the expertise of Groupe ADP will also be attractive to Angkasa Pura II. APII may have an eye to concluding further agreements with the French company, which has already declared its intentions in Southeast Asia by way of an (abandoned) attempt in 2017 to form a strategic alliance with Airports Corporation of Vietnam, including a 20% stake. Both of the Angkasa Puras – I and II – together with the government have at times suggested that they might be partially privatised.

The previous CAPA report, when this transaction was first mooted, was in Jul-2021. Has much changed since then?

The ‘recovery’ from the effect of the pandemic is even patchier now, but Indonesia’s COVID-19 cases peak may be past

That report referred to a ‘patchy’ recovery from the pandemic as measured by seat capacity, with capacity still at less than half the level that it was. 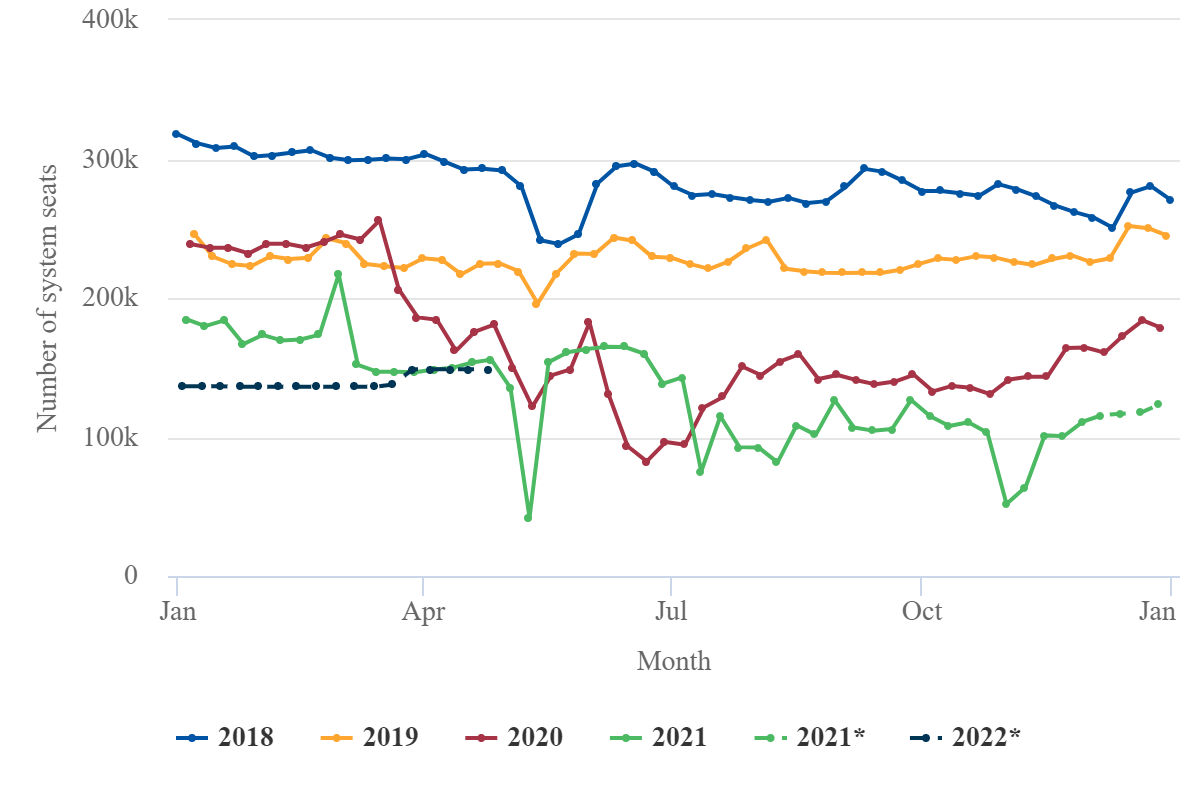 Consequently there has been no change at all in the ratio of domestic (95%) to International (5%) seats.

The previous observation that “there is a long way to go before any sort of international cachet can be achieved” remains. Lion Air remains the largest airline by seats, its share having fallen since Jul-2021 by three percentage points, to 28%. 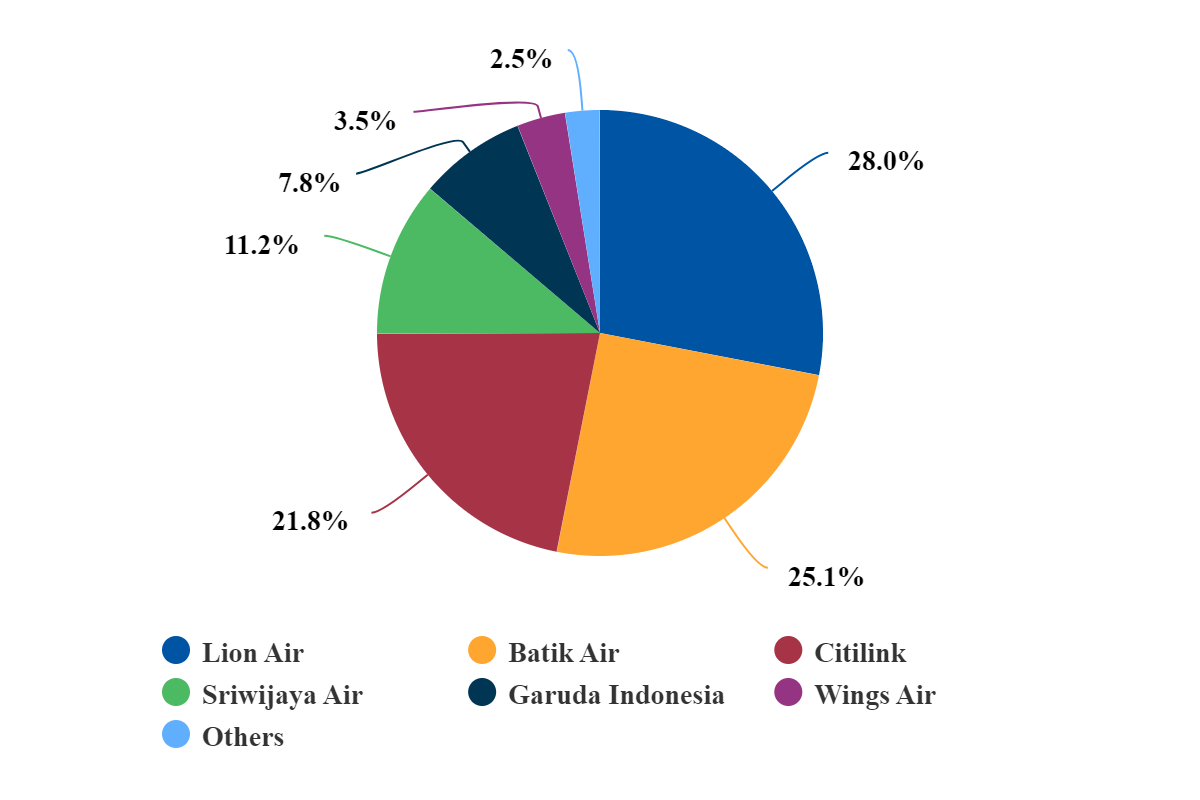 The only countries with air service to Medan are China and also Saudi Arabia, presumably on account of oil and gas business. There are substantial natural resources of oil and natural gas in nearby Aceh province.

There is a reasonable degree of utilisation.

The airport appears to be closed from 2300 to 0400 daily. Otherwise, as can be seen in the chart below, which is for Wednesday 24-Nov-2021, there are flight operations (as measured by seat capacity) in each hour block, although it goes as low on 215 seats in two of those blocks.

Moreover, where international capacity is concerned it occurs in only two of the hour blocks and they are three hours apart, which means paying for border control facilities for a limited amount of time. 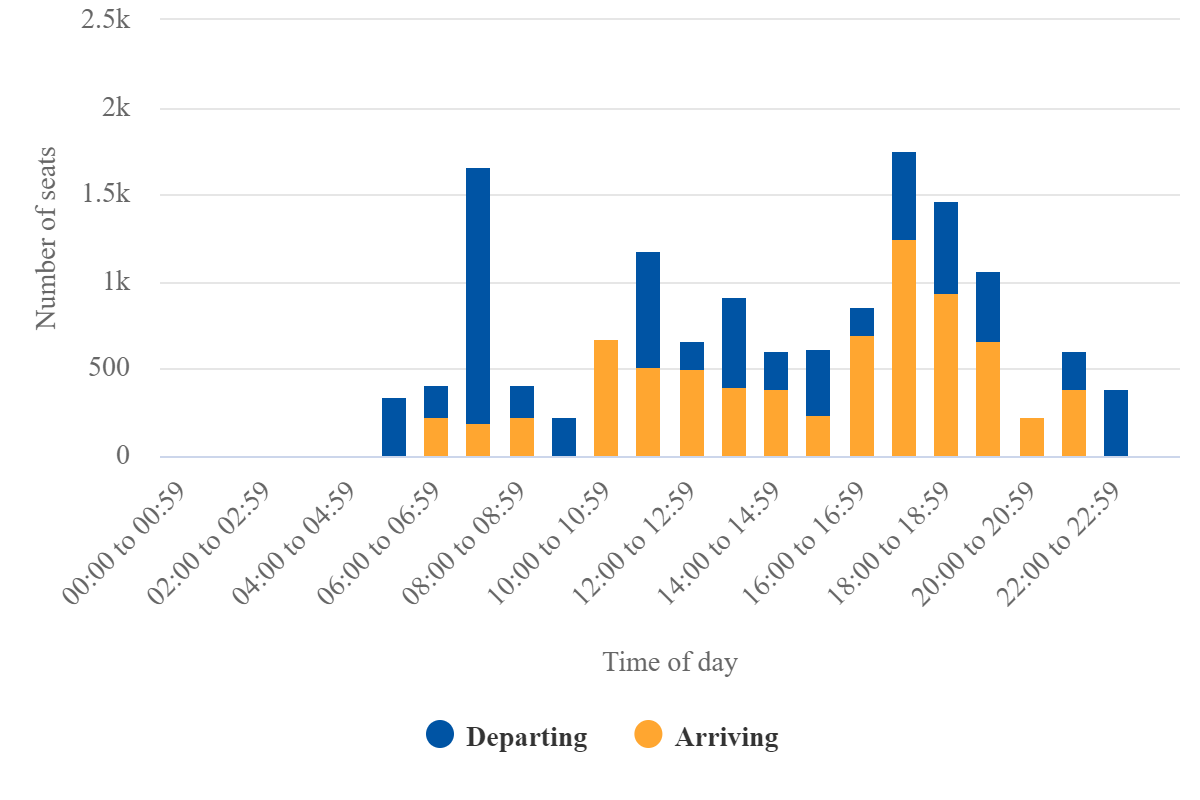 Question marks still remain on the intention of GMR and Angkasa Pura II “to transform the airport into a western international hub for Indonesia”.

The only part of that statement that is accurate at present is that it is in the west of Indonesia, even if it is on the eastern coast of the island of Sumatra, on the Malacca Straits.

The main question is how it will achieve the ambition of being an international hub without foreign airlines, and between which places it will be a hub.

There is an argument for building up point-to-point traffic for sure.

North Sumatra has a population of 15 million and the Aceh province of more than five million, so collectively 20 million, which would be a mid-sized country like the Netherlands in Europe. Sumatra in total has 50 million – the size of a large country.

But whereas Amsterdam saw 72 million passengers at Schiphol Airport in 2019, there were less than eight million at Medan.

The concentration of oil and gas businesses in Aceh is also a reason for encouraging more capacity to build up O&D traffic for that specific purpose, with regular connecting services to Banda Aceh airport (which handled one million passengers in 2019) or others as appropriate, and in that case with Medan acting as the hub.

But for Medan to act as a hub in any other capacity, and in particular international to international, would bring it into competition with Kuala Lumpur, 300 km away on the other side of the Malacca Strait, and with Singapore, further to the south: two of the leading hubs for the entire region.

Angkasa Pura II invested USD815 million in recent years to extend the runway to accommodate wide body aircraft; to expand the cargo terminal from 13,450sqm to 24,715sqm; and increase the size of the passenger terminal to raise capacity from nine million to 17 million passengers per annum. A 3750m x 60m runway should be able to handle any commercial aircraft type.

Then, in Sep-2021, PT Angkasa Pura II announced plans to collaborate with its subsidiary PT Angkasa Pura Aviasi and the Investment Coordinating Board to introduce development projects at the Medan Kualanamu International Airport area to potential investors. An airport city is to be built on an area of ​​135ha consisting of a hotel, convention hall, golf course and driving range, theme park, retail and hospital.

The airport city is projected to accommodate mainly the needs of Medan, Belawan and Tanjung Morawa (industrial zone).

Planned development of a commercial area to be introduced, sounding that it will stand on 20 hectares of land, which will be used for factory outlets. An e-commerce specialised warehousing area will be built on an area of ​​two hectares. The warehousing will accommodate e-commerce needs as the market expands in Indonesia.

Realising the ambition remains a challenge

So the airport does have some things going for it, even if these developments are not specifically related to the growth of hub activities.

Even so, it is difficult not to the draw the same conclusion as for the previous report: i.e. that the traffic mix is currently wrong for an international hub. It really needs airlines like Garuda to make it a secondary hub and start a serious range of international services (and/or for a major foreign LCC to put in a base there) for it to be taken seriously by prospective strategic partners – especially foreign ones.

Except that a foreign investor has taken it seriously.

It might be argued that GMR has done it at Delhi, helping that airport to much-needed modernisation, fast growth (as high as 21%-22% in some years), and the ability to break away from a reliance on Middle East airlines in favour of home grown ones to continue to build its international business base.

But in the end it still has a tough challenge at Medan to achieve the ambition that GMR and Angkasa Pura II have set it.