Finnair: what a new CEO should know before joining. Cost reductions "absolutely necessary"

Finnair’s CEO Mika Vehviläinen stepped down on 28-Feb-2013 to take the helm at cargo handler Cargotec. During his three year tenure, Finnair (which celebrates its 90th anniversary in 2013) came back from heavy losses into the black and added an order for five A321s to its order for 11 A350s. A successor is yet to be appointed, but the group has ambitious targets for its long-haul network and its financial performance. Maintaining profitability to fund aircraft deliveries will be one of a number of challenges for the next CEO.

Mr Vehviläinen set a target of doubling Finnair’s revenue from Asian traffic by 2020. Its unit costs are competitive against other European legacy carriers, but less so compared with carriers based in lower wage Asian economies and European LCCs. Both the short/medium and long-haul parts of Finnair’s network will need to be highly cost efficient.

The strategy will require growing European feeder traffic and Finnair will need to develop appropriate platforms to deliver this, either organically or by building partnerships such as its joint venture with Flybe.

Finnair is back in the black

Finnair returned to a small net profit in 2012, with a result of EUR12 million after posting a net loss of EUR88 million in 2011. The pre-exceptional operating result improved from a loss of EUR61 million to a profit of EUR45 million, representing a margin of just 1.8%.

The positive results achieved in 2012 were Finnair’s first profits since 2007, before the global financial crisis. Revenues and profits took a significant downward step in 2009, since when the recovery path has not been a smooth one. Gross debt has fallen every year since 2009, although net debt increased from 2009 to 2011 before falling in 2012.

The group’s 2012 year end gearing (net debt to equity ratio) of 18% is low by European legacy carrier standards and, even factoring in off balance sheet operating leases (capitalised at eight times annual lease payments), adjusted gearing of 77% is relatively healthy. Finnair’s reserves of cash and cash equivalents were EUR431 million at the end of 2012, equivalent to 64 days of revenues, a reasonable cushion. 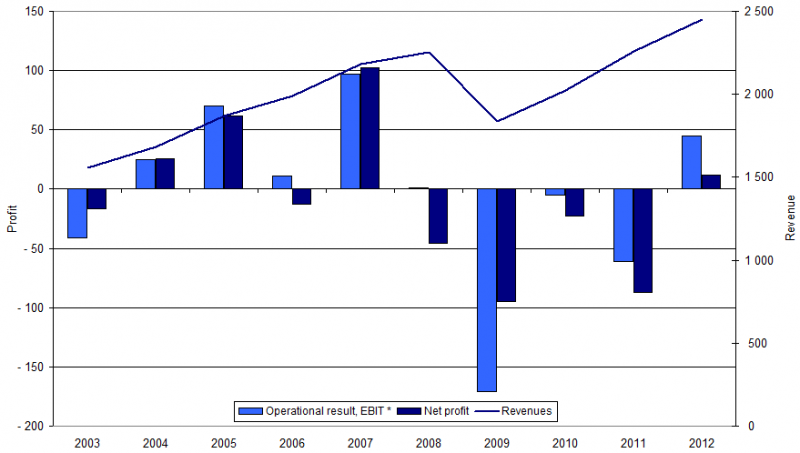 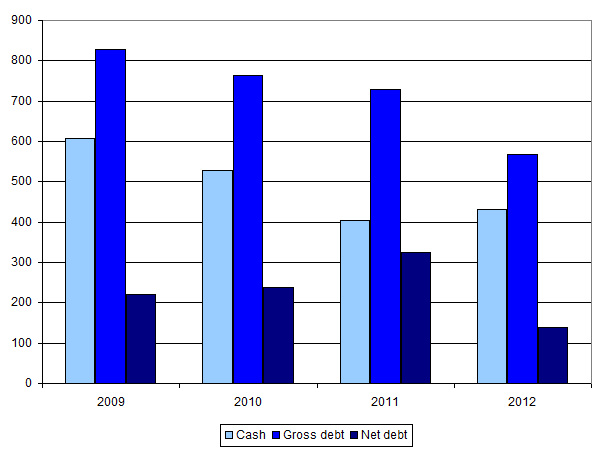 The Airline Business segment is the most important in terms of profits and is also the most volatile of Finnair’s divisions. In 2009 it recorded an operating loss of EUR182 million and this improved to a profit of EUR32 million in 2012. 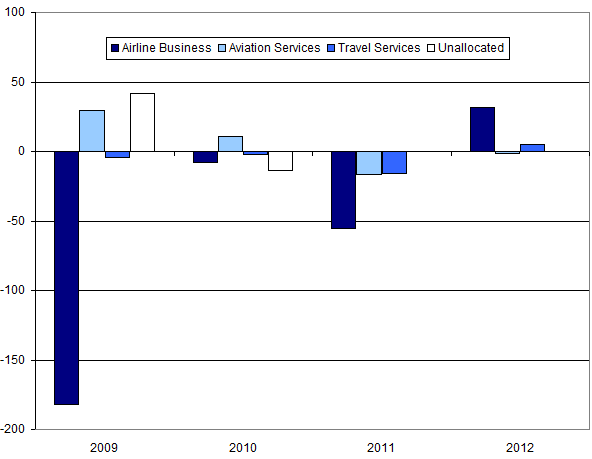 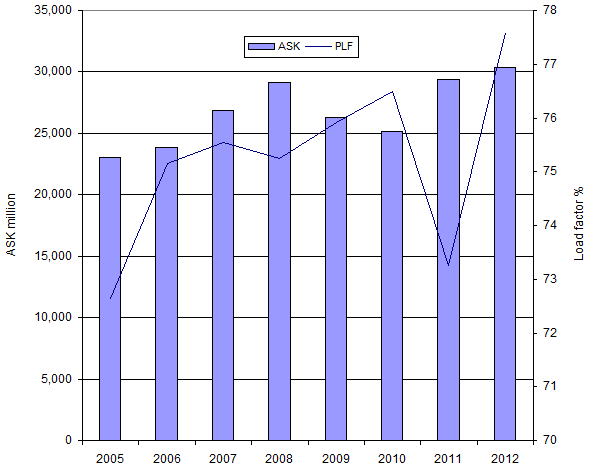 Finnair’s revenue growth in 2012 of 8.5% was driven by growth in its Airline Business segment, whose revenues were up 12.5% to account for almost 84% of group turnover. The Airline Business segment enjoyed RASK growth of 7.6% on capacity growth of 3.5%. In terms of the geographical split, Asia was the most important destination area, accounting for 44% of passenger revenues in 4Q2012, followed by Europe with 34%. 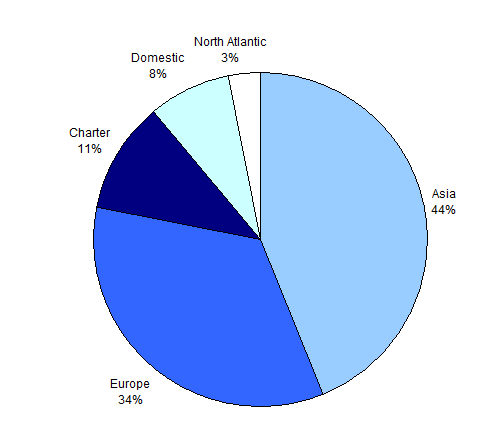 Finnair’s operating costs grew by 3.9% in 2012, considerably slower than the growth in revenue in spite of a 20.7% increase in fuel costs, which were the biggest cost at almost 28% of the total. Staff costs, the second biggest category, fell by 6.3%. Finnair said that it had achieved EUR100 million out of its EUR140 million cost savings programme launched in 2011. It subsequently announced an additional EUR60 million of targeted savings in October 2012.

Unit costs (costs per available seat kilometre) increased by 2.3%, but non-fuel costs fell by 3.6%. Apart from fuel, the only sub-categories where unit costs went up were traffic charges – which are out of management’s control – and maintenance. 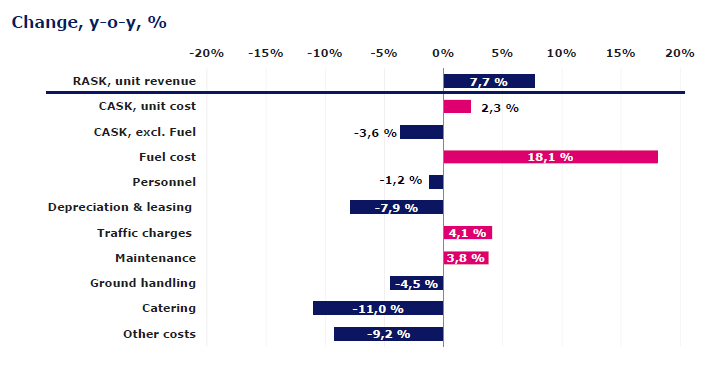 Labour productivity one of the best among European ‘flag carriers’, but complex salary structures need to be fixed

As CAPA noted in our analysis of European airlines labour productivity, Finnair has a relatively productive workforce by comparison with other legacy carriers. It remains lower on all productivity measures than the LCCs, but 2012 saw improvements for Finnair in most of the key measures.

The main exception to this was employee costs per employee, which grew by 3.2% in 2012 and which are in the middle of the range of all the European airlines analysed by CAPA (whereas Finnair is in the better half of the group on other productivity measures). As the recently departed CEO Mika Vehviläinen commented in the 2012 results statement, “With regard to personnel costs, we are still more expensive than our competitors, and this problem has to be solved. The intention is to find solutions together with personnel groups to simplify the complex salary and remuneration structures.”

Finnair's long-haul strategy is based on growth to Asia

Finnair has carved a successful niche out of targeting passengers flying from Europe to Asia by taking advantage of the geographical positioning of its Helsinki hub. It claims to offer the fastest connections between more than 50 European destinations and 11 Asian mega-cities. This strategy is also motivated by the size and forecast passenger traffic growth of aviation markets in emerging regions of the world. 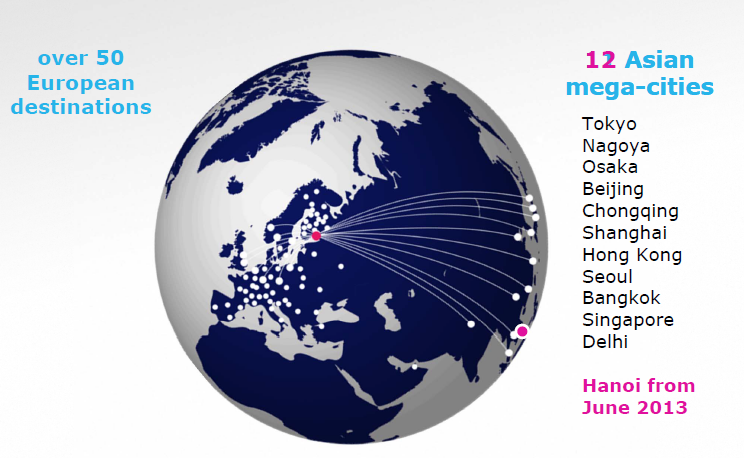 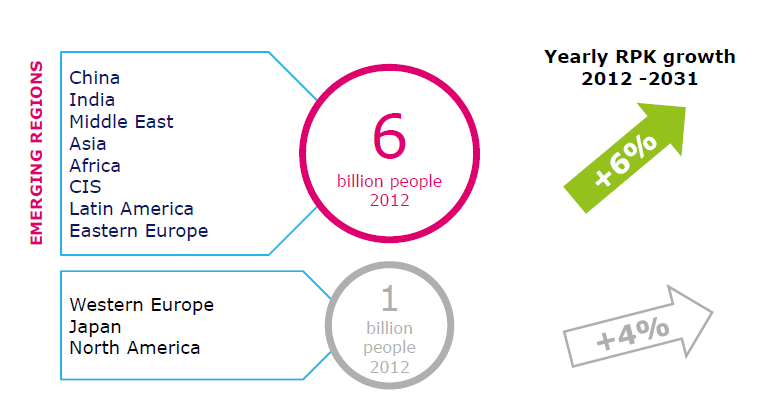 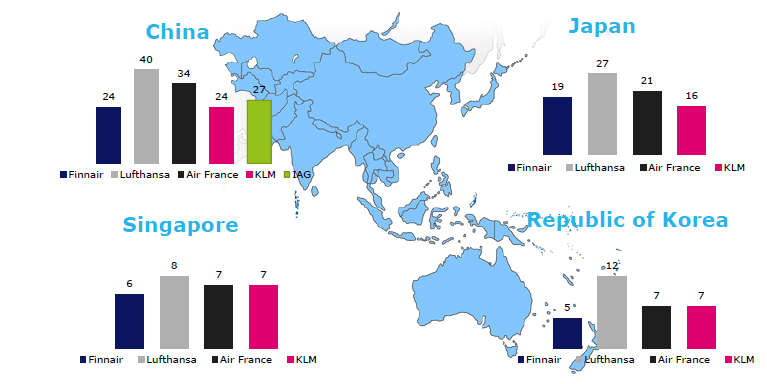 By contrast, Finnair's only other long-haul route area, the North Atlantic, accounted for only 5% of ASKs. Leisure (non-scheduled) capacity has seen its share of Finnair’s capacity fall from 20% in 2007 to 12% in 2012. 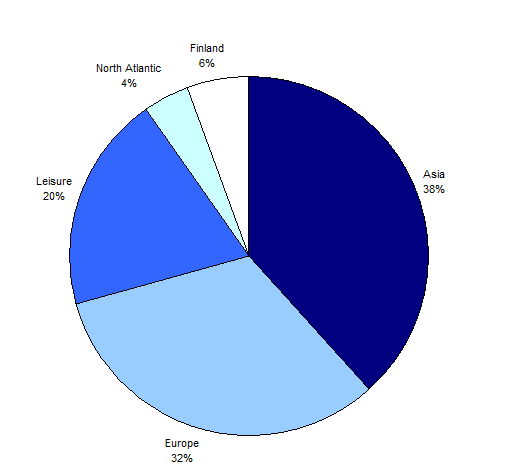 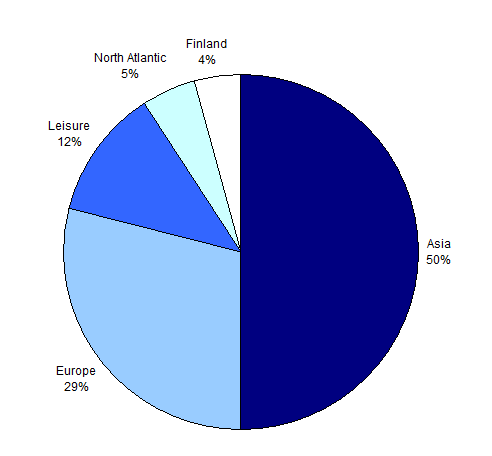 Finnair’s Asia strategy requires short and medium-haul feed and it has a pragmatic approach to developing platforms to generate this feed. Its partnership with Flybe on European niche and domestic routes is all about bringing traffic to Helsinki for its Asian network. 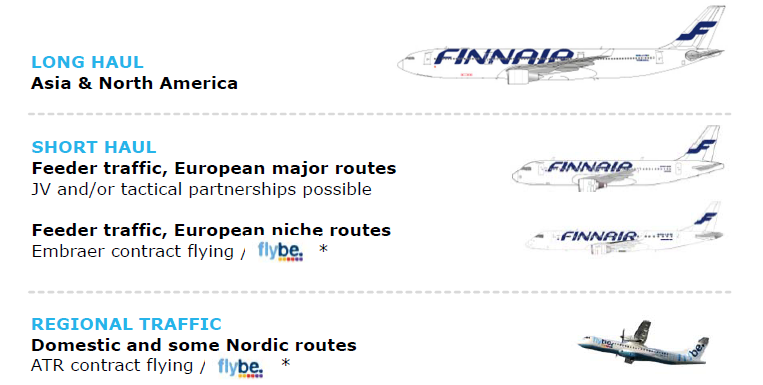 An all Airbus fleet is on the horizon

At 31-Dec-2012, Finnair operated a fleet of 45 aircraft, of which 25 Airbus A320 family, 15 were Airbus wide bodies, one Embraer and four Boeing 757s carrying leisure traffic. The average age of this fleet was 9.8 years. Finnair owned a further 24 aircraft operated by other airlines, mainly Flybe Finland (12 Embraers were transferred from Finnair to Flybe Finland in Oct-2012). Flybe operates the aircraft as contract flying, whereby the commercial control over the routes and the risk remain with Finnair. 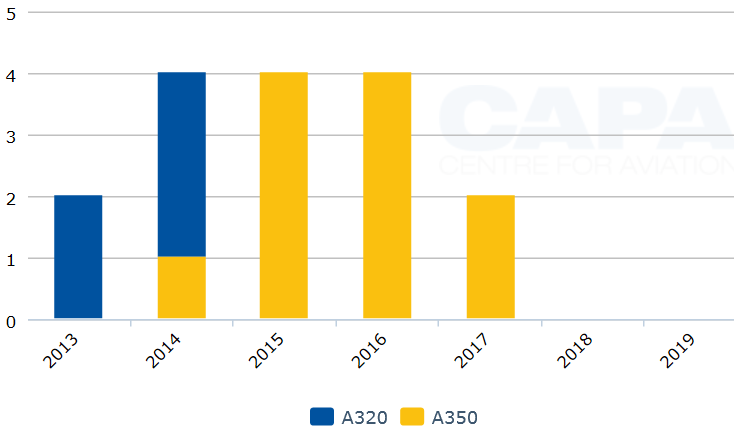 Finnair was cagey about its prospects for 2013, referring to “the uncertain economic outlook in Europe, together with weakened consumer demand and slower growth in Asia” and warning that fuel costs are expected to remain high. Nevertheless, Finnair expects its turnover will grow in 2013 and that CASK ex fuel will fall, leading to an expected positive operational result.

Beyond 2013, Finnair’s financial targets are as follows:

The first three targets will require further cost reductions and an ongoing favourable unit revenue environment, in addition to controlled capital expansion. The adjusted gearing target (net debt including capitalised operating leases as a percentage of total equity) is already being exceeded. The fifth target, coupled with a proposed 2012 dividend of EUR0.10 implies that Finnair would hope to achieve sustainable earnings per share (EPS) of at least EUR0.30 (compared with EUR0.02 in 2012) if it is not to have to cut future dividends.

RASK is up, but CASK remains key: 'Additional cost reductions are absolutely necessary'

Finnair has done a fairly good job in containing unit costs (particularly ex fuel unit costs) in recent years, but the growth in unit revenues has been the main driver of its profit recovery. As demonstrated by its cost savings programmes, Finnair acknowledges the need to go further with CASK reduction plans.

Mr Vehviläinen said: “Additional cost reductions are absolutely necessary for Finnair: the goal is sustainable profitability so that Finnair is capable of investing in new Airbus 350 aircraft that are vital for a competitive future.” 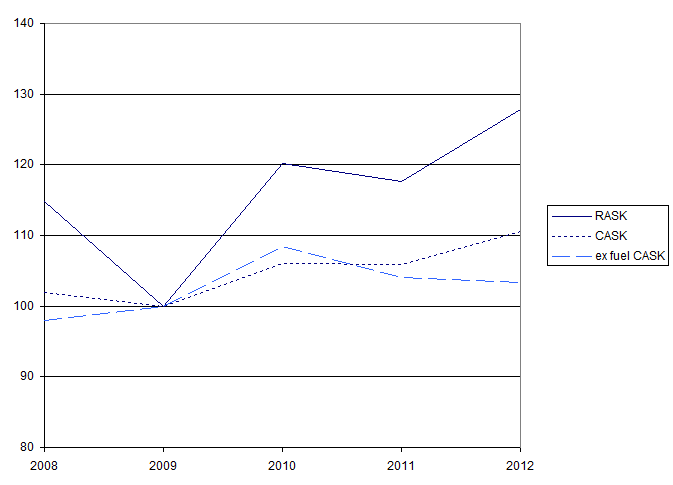 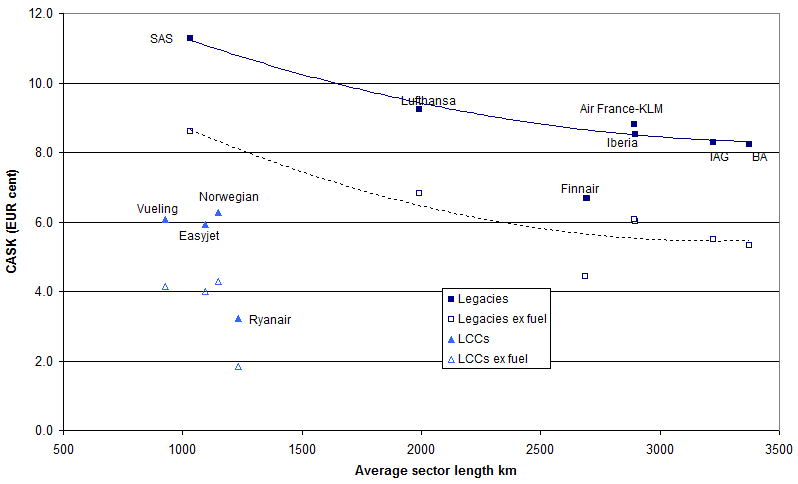 Finnair operates in a focused niche, connecting Europe’s secondary cities with large cities in Asia and its unit costs are competitive compared with other legacy flag carriers in Europe. Nevertheless, it needs European feed for its long-haul network and its cost base remains high compared with Norwegian Air Shuttle and the main European LCCs in the short-haul market, making this feed vulnerable to price-based competition.

Finnair’s new partnership with Flybe is in its early days, but it remains to be seen whether or not the latter is a suitable platform for providing this feed in a cost efficient manner. Flybe has been making losses on its UK network and its labour productivity is below many competitors.

In addition, Asian competitors on Finnair’s long-haul routes tend to have lower unit costs and, if Norwegian is successful with its long-haul expansion, Finnair’s Asian routes could at some point face a cost-efficient competitor in its own backyard. Norwegian will start its first Asian route this summer with a service from Oslo to Bangkok. While this is not a direct airport to airport competitor, it will be interesting to see what impact it has on Finnair's Helslinki to Bangkok service and to see which Asian destinations Norwegian targets next.