Volotea, Europe’s newest low-cost carrier, is preparing to launch operations in April with a base at Venice Marco Polo Airport in Italy. The carrier is headquartered in Barcelona, which was the main hub for now defunct carrier Spanair, but has decided to base its initial fleet of Boeing 717s in Venice. Volotea will initially serve several destinations in Italy, France and Spain but has no immediate plans to serve Barcelona.

Volotea was founded last year by Carlos Muñoz and Lázaro Ros, who founded Spanish budget carrier Vueling in 2004. Mr Muñoz, who is Volotea’s CEO, says the airline’s goal “is to forge new and efficient air connections between Europe's small and mid-sized cities currently not well served by direct flights”. By selecting the 717, which is smaller and significantly cheaper to acquire than 737NGs or A320s, Volotea is able to enter routes which are generally too thin for other LCCs.

Volotea is expecting to commence operations on 05-Apr-2012 and aims to serve at least 10 routes when it commences operations, with further expansion planned over the European summer. The carrier has already taken delivery of a single 717 leased from Boeing Capital that was previously operated by MexicanaClick. Two more 717s are expected to be delivered prior to Volotea’s launch.

MexicanaClick originally committed to leasing from Boeing Capital 25 ex-Midwest Airlines 717s but had taken delivery of only 16 of these aircraft when it ceased operations in Aug-2010. Boeing Capital has since been trying to remarket the aircraft, several of which would potentially be available to Volotea to lease if its expansion ramps up as the year unfolds. "We see the 717's capabilities as the best solution for us in filling this need, and we see the partnership with Boeing as the right one for our success,” Mr Muñoz says.

Volotea stated in Jan-2012 it was in the final stages of obtaining its Air Operator’s Certificate (AOC). The airline was already in the pipeline before Spanair’s collapse, so it should not be seen as an attempt to step in where Spanair left off. Volotea has a vastly different strategy than Spanair as it aims to focus on routes where there is still untapped low-cost potential, particularly those not currently operated.

Volotea is not taking over any of Spanair’s routes and Spanair’s collapse has not prompted Volotea to adjust its business plan. But as Volotea is headquartered in Barcelona, it would be logical for the carrier to consider a base there given Spanair’s exit from the market.

Spain is seeing a number of changes in the aviation market, including rapid expansion from Barcelona-based Vueling and the launch in late March of Iberia’s new budget subsidiary Iberia Express. As the Spanish market continues to evolve there could be an opportunity for Volotea to make a move.

Volotea’s business plan envisions a point-to point-network primarily focussing on Spain, Italy and France with a single aircraft type in all-economy configuration. Mr Muñoz says, “we’re betting on good service and low prices to grow in a market that’s still untapped”. The airline reportedly has hired staff from Quantum Air, which was based in Madrid between 1999 and 2012 and was the last 717 operator in Spain. Volotea is unlikely to have much difficulty in further building its workforce given the collapse of Spanair.

The airline is backed by two European private-equity funds, Axis Participaciones Empresariales and Corpfin, and one from the US, CCMP Capital. The European funds own 25% of the carrier while CCMP Capital holds 49%. The remaining 26% is held by Mr Muñoz and Mr Ros. CCMP Capital’s chairman, Greg Brenneman, also chairs Volotea’s board and was previously president and COO of Continental Airlines. The airline is considering an initial public offering (IPO) at some point in the future, but will wait until the airline is more established.

Volotea to establish first operating base in Venice

It is interesting that while the airline is headquartered in Barcelona, it is launching its operations from Venice Marco Polo Airport. Marco Polo is Venice’s primary airport while Venice Treviso is the city’s low-cost alternative airport, where Ryanair currently accounts for 74% of capacity.

Venice Marco Polo also has service from several LCCs including easyJet and Vueling. But budget carriers only account for 32% of total capacity at Marco Polo, according to Innovata data. Given the relatively low LCC penetration rate, Venice Marco Polo could be a less challenging market for a new LCC entrant such as Volotea compared to a larger LCC market such as Barcelona. 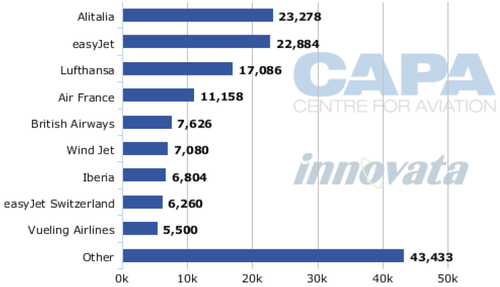 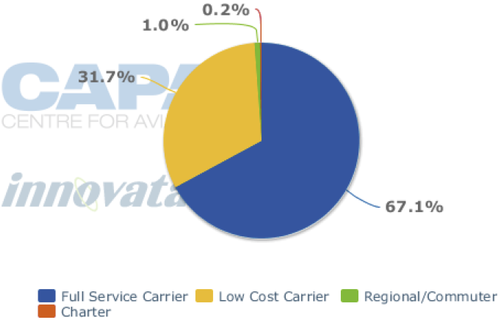 Volotea has not disclosed many details about its plans for other hubs, however, one could assume it will look to operate from Barcelona El Prat at some stage in the future considering it is headquartered in Barcelona. This may not occur until Volotea becomes more established and is operating a larger fleet. Much of the void left by Spanair in Barcelona has already been filled by Vueling, Iberia and Ryanair. These three carriers could look to increase their share of the Barcelona market even further, making it even more difficult for the entrance pf a new carrier such as Volotea.

At Barcelona El Prat, Vueling, Ryanair and easyJet are now the three leading carriers, with Vueling offering just under 229,000 seats per week. Vueling accounts for 32% of the capacity followed by Ryanair with 14% and easyJet with 8%. The airport is well served by a combination of full service and low-cost carriers, however, the budget carriers dominate the airport, holding 64% of capacity share. 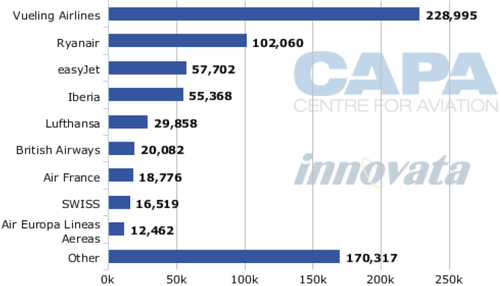 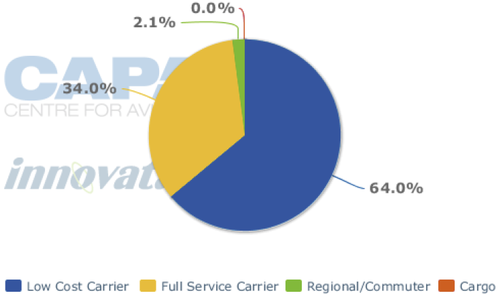 Given its initially small size and its selection of the relatively small 717, Volotea could struggle to compete in Barcelona if it opted to open a base at its headquarters. The carrier would have a hard time finding a route from Barcelona that is not already operated by an LCC. Vueling, for instance, will serve 70 destinations from Barcelona in its summer 2012 schedule. Volotea would likely have to enter competitive routes, where it could struggle given it would not be able to offer the frequencies or network that Vueling provides.

Venice offers potentially more opportunities as it is not nearly as saturated by budget carriers. Venice also offers more routes with no competition – an important consideration given Volotea’s model is the use of the 717 to open routes that are not yet operated. easyJet, the largest LCC at Marco Polo, now only serves eight destinations from Venice.

Mr Muñoz and Mr Ros left their executive positions at Vueling in Nov-2007 prior to the carrier’s merger with Iberia’s Clickair. However, they still remain minority shareholders in Vueling which could become an issue if Volotea decided to enter the Barcelona market. Vueling is currently 46% owned by Iberia parent International Consolidated Airlines Group (IAG). Iberia was also the main shareholder in Clickair prior to the Clickair merger with Vueling. The CEO of Vueling, Alex Cruz, was also the original CEO of Clickair.

Volotea has expressed its intensions to increase its network from Venice to 24 routes in summer 2012, with Mr Muñoz saying the Spanish destinations of La Coruna and Granada are being considered. When examining current routes from Venice Marco Polo and Treviso, the east coast of Spain is already served but not the west coast. As a result, the west coast of Spain could become a key area for Volotea to target.

The 737 and A320 dominate the fleets of low-cost carriers in Europe and around the world. With capacity for up to 189 seats on the 737-800 (as seen with Ryanair’s aircraft) or 180 seats on the A320, the aircraft can carry a relatively large load on short-haul sectors. The routes these aircraft are placed on generally see high traffic, significantly stimulated by low pricing from the budget airlines. Volotea’s selection of the 717 instead of the 737 and A320 is in line with its strategy to serve smaller regional routes and open routes not currently served. Volotea’s 717s will be configured with 125 seats.

The use of 737 or A320 aircraft would potentially result in over-supply on Volotea’s routes. Despite being an older type with higher operating costs, the 717 is significantly cheaper to acquire. There could be opportunities over the next few years for Volotea and other LCCs following a similar model to acquire large batches of 717s for relatively cheap prices.

AirTran Airways, which is by far the world’s largest operator of the 717, is expected to offload its 717 fleet as it looks to adopt the all-737 model at new parent Southwest Airlines. Southwest CEO Gary Kelly has said AirTran’s fleet of 88 717s is unlikely to be kept. This will result in a huge number of the type being placed on the market, enabling Volotea and potentially other LCCs easy access to more aircraft for expansion, if required. SAS Group Finnish low-cost subsidiary Blue1 also operates the 717.

Volotea’s launch comes as Iberia launches its low-cost subsidiary Iberia Express at the end of Mar-2012. Iberia Express will be based at Madrid Barajas Airport, operating a fleet of A320 aircraft. It benefits from the resources and existing network of its parent as it commences operations. As it is independent, Volotea will have to be more resourceful and careful with its selection of routes.

Mr Muñoz is confident that the Volotea model, while different than most other LCCs, will be successful. He says, “the [economic] crisis is making customers more price sensitive”, creating an opportunity for Volotea to be able to enter the low-cost market. But it remains to be seen, in the face of a number of recent airline collapses in Europe, if a new generation of carriers can successfully emerge.