British Airways faces the threat of strike action by cabin crew after failing to agree new terms with Unite the Union. BA has proposed pay cuts for the majority of flight attendants as a way of saving more jobs, although some newer crew members would receive a pay rise. BA has said that it will dismiss employees and re-engage them on new contracts if no agreement is reached.

In spite of this pressure point in airline industrial relations, the number of news articles on CAPA's website that mention the word 'strike' has dried up to a barely noticeable trickle. This metric, which CAPA has tracked over the past decade, has broadly followed the airline profit cycle, not surprising since labour is typically more demanding when the profit cycle is at its peak (and vice versa).

Both measures look set to plummet to their lowest levels this year.

A fall in industrial action would normally be welcome, but not as a reflection of the economic devastation visited on the airline industry by the COVID-19 crisis.

CAPA publishes over 300 stories daily on aviation worldwide, so many trends are discernible as keywords appear - or not.

The number of news articles on CAPA's website that mention the word 'strike' reached a peak in 2016, with 1,228 such articles. This was a 30% increase on 2015 and higher than in any year over the past decade.

This could be even lower, since the monthly numbers have slowed to low single digits since Mar-2020. Even most of those related to mentions of strikes in previous periods, or of strikes in general, rather than actual or planned strikes in the month concerned. 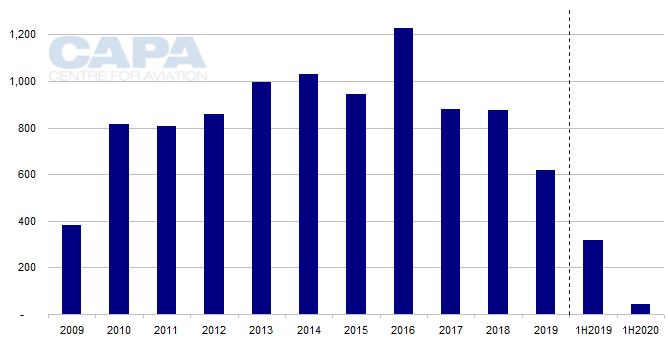 The number of strike articles, and airline profit cycle, set to hit record low in 2020

Whatever the final number is for 2020, this year's total seems certain to be easily the lowest since 2009, when the number was 381.

Over the past decade the number of strike-related news articles on the CAPA website has shown a broad correlation with the annual operating profit margin of the global airline industry.

Both followed a largely upward path between 2009 and 2016, and both have declined since 2016. This correlation supports the hypothesis that labour often becomes more demanding of an increased share of the rewards when the profit cycle nears the top.

By contrast, when the airline industry is more economically challenged, labour groups' bargaining power is reduced and hanging on to jobs becomes their sole focus. This makes talk of strikes extremely rare when airline are at the bottom of the profit cycle.

The previous low point in the annual count of strike-related articles was in 2009, during the global financial crisis, when airline industry operating margin was only 0.4%.

It seems highly likely that 2020 will witness a new record low in strike related articles, coinciding with a record negative operating margin for the airline industry. 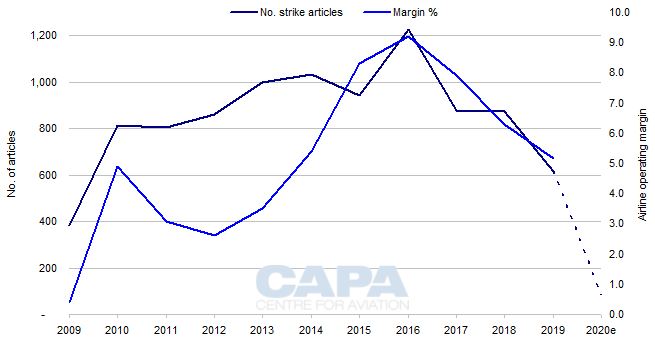 *Number of articles for 2020e is projection based on the year-on-year growth rate for 1H2020.
Source: CAPA - Centre for Aviation, ICAO.

As noted above, stories of strikes, or possible strikes, have been very rare in 2020.

In Jul-2020 CAPA reported on a planned strike by staff at Air France's regional airline HOP! at Lille Airport, in protest over the intended closure of its MRO base there.

Before lockdowns took hold in most of the world, the numbers of strike-related articles were a little higher, but had already started to fall significantly. There were 36 in Jan-2020 and Feb-2020, versus 107 in the first two months of 2019.

The early months of 2020 included coverage of a relatively small number of actual or threatened strikes.

As is typically the case, Europe took a disproportionately high share of these articles.

However, more recent headlines on industrial relations in the European airline industry have been on headcount reductions and pay cuts.

Airlines are looking to reduce fixed and semi-fixed costs, which include labour, while unions are anxious to limit job losses and have agreed pay cuts to achieve this.

There are also some examples of industrial relations accords elsewhere among Europe's leading airline groups.

Air France-KLM has achieved a new agreement with the French pilot union SNPL to allow its low cost subsidiary Transavia France to operate in the French domestic market (subject to a vote by union members).

Lufthansa has reached agreement with cabin crew, but not yet with other labour groups, about its restructuring programme.

However, not all labour negotiations have proceeded smoothly in the crisis.

Ryanair has reduced the operations of another subsidiary, Laudamotion, after its pilots did not agree new terms.

Ryanair established its group structure, deploying subsidiary airlines in addition to the main Ryanair operation, partly to give it greater flexibility in its labour negotiations.

If the staff at one subsidiary prove difficult, it can push growth through another. Ryanair's agreements with UK and Irish staff strengthen its hand.

As one of the few European airline groups actively seeking market share expansion in the post-virus recovery phase, Ryanair may remain a preferable employer compared with many other airlines.

EasyJet pilots are far from happy with the airline's management

At Europe's second largest LCC, easyJet, members of the pilot union BALPA registered their disgruntlement over proposed job losses by passing a vote of no confidence in easyJet COO Peter Bellew.

Such a vote has no immediate consequence, but demonstrates the delicate state of industrial relations at the airline as it seeks to navigate through the crisis.

Labour and management must collaborate through the crisis

The reported strike plans by BA cabin crew and ground staff also demonstrate that airlines cannot take labour acquiescence to pay cuts for granted, even with the very real threat of significant job cuts to back the airlines up.

However, this is the exception that proves the rule at the moment. References to strikes in the airline industry have almost completely dried up.

At the bottom of the profit cycle, it is usual for management to have the upper hand over labour in airline industrial relations.

However, the current cyclical trough goes deeper than ever before. Not only does this threaten airline industry jobs, but the very existence of much of the industry itself.

It is in the mutual interest of both labour and management to navigate a collaborative way through the crisis. For the time being, much focus is on survival in the short term. As time progresses, more fundamental change will be necessary, making even more important a cooperative understanding of the issues and challenges.