On 27-Apr-2020 the High Court of Ireland confirmed the appointment of an insolvency practitioner working for KPMG as an interim examiner for CityJet. 'Examinership' is an Irish form of protection from creditors for up to 100 days.

CityJet is a leading wet lease provider of regional jet capacity to European flag carriers, but the coronavirus crisis has pushed it into insolvency. It has also halted the company's planned merger with Air Nostrum, to form what would be Europe's largest regional airline.

Europe's regional airlines have also been thrown into the spotlight by an open letter published on 26-Apr-2020 by the European Regions Airline Association (ERA) asking all European institutions and member states for "urgent and swift help to avoid the total collapse of the sector".

According to data from the CAPA Fleet Database, Europe's regional airlines actually have a higher share of fleet in service (41%) than other airlines (30%). Nevertheless, the crisis presents enormous risk to the vital regional airline sector (particularly to those that are not part of larger airlines), which often provide essential connectivity to remote regions.

CityJet has astutely reshaped its business in recent years since its days as part of Air France-KLM, when it operated exclusively as an Air France franchise.

After returning to flying some routes from London City airport under its own brand and code, it has refocused on the provision of wet lease regional jet capacity to larger European airlines: Air France, Brussels Airlines, SAS and Aer Lingus. Before the crisis, it was one of the European leaders in this segment.

CityJet has generated revenue of more than EUR220 million in each of the past three years. It was profitable in 2017, but made losses in 2018 and 2019. It has debts of EUR500 million and balance sheet liabilities exceeding its assets by EUR186 million.

The nature of its wet lease contracts is such that the commercial risk lies with its client airlines, but the sudden end to a large chunk of its business has pushed CityJet into insolvency - even while some of its clients are being supported by their governments.

In order to qualify for examinership, a company must be insolvent and also demonstrate that it has a reasonable prospect of survival.

The settlement gives the business up to 100 days to take steps to restructure and to come to new arrangements with creditors that must then be approved by the court. The company’s directors remain in control of the business during the examination process, under the advice of the Examiner.

SAS is now CityJet's main hope for the future, once the post-virus recovery starts. The continuation of its SAS contract is presumably the basis for the High Court's agreement that CityJet has a reasonable prospect of survival.

CityJet's creditors include the Irish tax authorities and lessors.

CityJet has a current fleet of 33 regional jets

According to the CAPA Fleet Database, CityJet's fleet of 33 aircraft (all currently grounded) includes 23 that are leased.

Its fleet comprises 28 Bombardier regional jets, four BAE 146s, and one Sukhoi Superjet. A previous fleet plan to grow its SSJ fleet was reversed in 2019 after problems were experienced with the aircraft in CityJet's contract for Brussels Airlines.

The majority of its leased aircraft are owned by lessors that are controlled by the Fortress Investment Group. Fortress, which is part of Japan's SoftBank, is one of CityJet's major shareholders.

The airline is likely to emerge from its examinership with a smaller fleet.

CityJet's planned merger with Air Nostrum has been interrupted

The COVID-19 crisis and CityJet's examinership have interrupted the planned merger between the Irish regional airline and the Spanish regional operator Air Nostrum. The agreement was announced at the Farnborough Air Show in Jul-2018 and approved by the European Commission in Jul-2019, but due diligence and a corporate restructuring of Air Nostrum had drawn out the process.

The proposed new holding company for both airlines would be 70% owned by Air Investment Valencia, which owns Air Nostrum, and 30% by Fortress.

Air Nostrum operates as a franchisee for Iberia, under which it sets fares that are marketed by Iberia. This entails more commercial risk than under CityJet's airline contracts.

The proposed merger, now halted, could be revived if CityJet emerges successfully from its examinership, and once demand for air travel recovers. The regional wet lease market in Europe is very fragmented.

The Air Nostrum/CityJet combination would not only be the biggest player in this segment, but its combined fleet of 81 (based on current strength) would make it Europe's largest regional airline by aircraft numbers in all segments.

The CAPA Fleet Database lists 79 regional/commuter airlines in Europe, of which 38 have a current fleet of 10 aircraft or more (i.e. in service or inactive).

The largest two of these, Lufthansa CityLine and KLM Cityhopper, are subsidiaries of larger airlines operating exclusively for their parent airline.

Air Nostrum has the biggest fleet among independently owned regional airlines, and CityJet is the fifth largest by this measure. Even after significant fleet reductions, the combination of the two could still be larger than Europe's number two independent regional airline, the Norwegian operator Widerøe.

Widerøe is unusual among European regional airlines in that it currently has 44 out of 46 aircraft still in service. This reflects its importance to Norway's domestic connectivity and its operation of public service obligation routes. 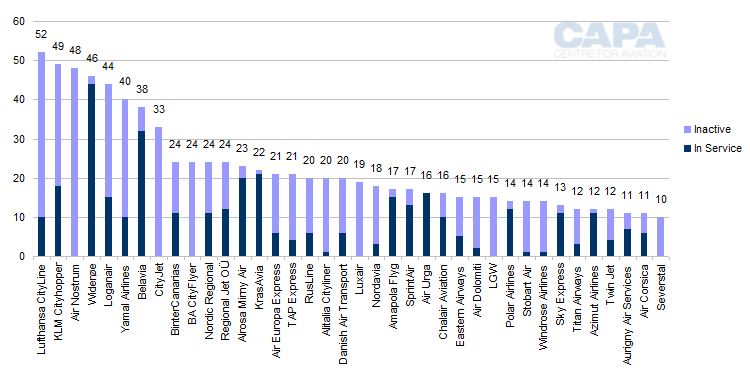 Analysis of data from the CAPA Fleet Database indicates that European airlines operating with the regional/commuter business model currently (27-Apr-2020) have 419 aircraft in service out of a total fleet of 1,012 aircraft, or 41%.

This is a devastatingly low proportion by any normal standard, but it is actually higher than the share of just 30% in service for all other business models in Europe.

Europe's regional airlines are also operating a higher proportion of the scheduled seats of this time last year, with 30%, versus 13% for all other business models (week of 27-Apr-2020 compared with week of 29-Apr-2019, source: OAG/CAPA).

European regional/commuter airlines vs all other business models: percentage of current fleet in service and percentage of year-ago* scheduled seats in operation, week of 27-Apr-2020 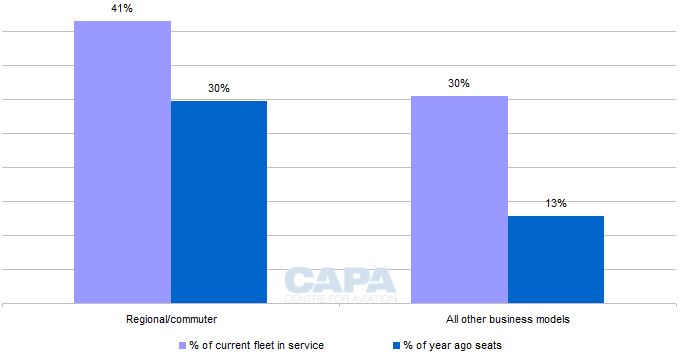 In spite of the slightly less severe fleet and capacity in service data for regional airlines, the sector is undoubtedly facing extreme risk. Regional airlines are typically smaller, which may make it harder for them to weather the storm.

ERA has argued that regional operators' provision of vital connectivity in and around the regions of Europe, including peripheral regions and remote islands, strengthens the case for support.

The fact that there is still a higher proportion of regional airline operations in service would seem to bear out this importance.

The association has called for urgent assistance in the form of state aid, public loans, and allowing the deferment of other payments.

ERA has also asked for temporary relief measures for the EU261 passenger compensation regulation, allowing delayed refunds to passengers for up to 12 months or refundable vouchers instead of immediate cash refunds.

With or without state aid, consolidation in Europe's regional airline sector seems likely to accelerate as a result of the crisis.

When demand returns, the risk-sharing model between wet lease providers and customer airlines may  - and arguably should - tilt further towards the customer. Nevertheless, the outsourcing of regional routes by larger airlines could increase if it is seen to be more cost effective than in-house operations.

CityJet should survive to take part in the post-virus recovery, and could emerge together with partner Air Nostrum with their position in the sector strengthened.

That would be a desirable outcome - and one that is of much wider significance than merely the survival of two small airlines.