Traffic is falling between China and Japan as well as China and the Philippines as a result of China's dispute with those nations over tiny and largely uninhabited islands. The situation in Japan is young and follows a wave of anti-Japanese protests and sentiment, resulting in some Japanese passengers cancelling tickets over safety concerns while Chinese passengers cancel tickets as a mark of nationalism. All Nippon Airways has reported ticket cancellations while China Southern and Spring Airlines are cancelling some services.

The China-Japan dispute concerns a series of islands in the East China Sea called Diaoyu in Chinese and Senkaku in Japanese. While ownership has long been contested, the matter flared up on 11-Sep-2012 when Japan nationalised the islands by purchasing them from the current Japanese landowners. Japan contends it wanted to preempt the at times defiant local Tokyo government from purchasing and administering the islands, which Tokyo has spoken of doing.

Japan hoped that national control would limit development and ensure a low profile for the islands – which for now is the exact opposite of China's response, which has consisted of stern warnings and even the rare event of tolerating multiple and huge demonstrations against Japan across China. Japanese businesses are shutting down during peak days of protest.

All Nippon Airways as of 18-Sep-2012 has seen 18,800 tickets cancelled for travel from September to November, the carrier told the Wall Street Journal. Some 3,800 were from Japan-originating passengers while the remaining 15,000 were from China-originating passengers. The total cancellation rate represents 5% to 8% of available scheduled capacity, according to CAPA's Innovata database.

Japan Airlines, amongst others, is treating the delicately named "Japan/China situation" as equivalent to a force majeur and waiving ticket cancellation and change fees for flights until 19-Oct-2012. Citing "recent irregular changes in travel demand", JAL on 21-Sep-2012 announced reductions on Japan-China flights from 10-Oct-2012 to 27-Oct-2012. Tokyo Narita-Beijing and Osaka Kansai-Shanghai Pudong will be reduced from two daily to one daily services while Tokyo Narita-Shanghai Pudong will be decreased from three daily to two daily services. This represents a 22% decrease in capacity in the China-Japan market for JAL.

Far greater proportional consequences are anticipated from Spring Airlines, which primarily carries Chinese toursits on its small but growing Japanese network and expects a 30-40% traffic decline in the short-term as a result of the dispute. Spring says 120 of 400 passengers booked to travel on the carrier until China's National Day Holiday in Oct-2012 have cancelled their bookings. Spring has cancelled its planned 10 charters to Tottori (but no other destinations). The Tottori services were only finalised in late Aug-2012, giving them little time to spool up and acquire bookings, unlike other Japanese destinations on Spring's network.

China Southern, which accounts for approximately 10% of capacity between China and Japan, as a result of the dispute will make unquantified capacity cuts in Sep-2012 and Oct-2012 from Guangzhou to Osaka and Fukuoka; Beijing to Toyama via Dalia; Tianjin to Hiroshima via Dalian; Dalian to Sapporo; Harbin to Niigata and Osaka; and from Shenyang to Fukuoka, Osaka and Nagoya.

Additionally, Juneyao Airlines has cited the dispute as the reason for postponing the launch of Shanghai Pudong-Okinawa services from 20-Sep-2012 to Nov-2012. Although not confirmed as a result of the island dispute, China Eastern will indefinitely postpone the re-commencement of four times weekly Shanghai Pudong-Sendai service, which was scheduled for launch on 18-Oct-2012. China Eastern officially cited lack of demand. Like Spring's Tottori charter, China Eastern's Sendai resumption was finalised in Aug-2012.

Prior to Japan's nationalisation of the islands, the director general of China's aviation regulator, the CAAC, Li Jiaxiang, and China Eastern Airlines separately cancelled meetings with Fukushima Governor Yuhei Sato. Talks were to centre on resuming services between Shanghai and Fukushima as well as to open new Chinese services from Fukushima.

Ctrip, China's largest online travel agency, said it was experiencing cancellations at a similar rate as after the Mar-2011 earthquake and tsunami in Japan.

The critical question is how long China will tolerate – perhaps even propagate – negative sentiment towards Japan, a decision that could see the current matter be merely a blip or start to have medium-term traffic impacts, as is occurring in the Philippines.

The Philippines has seen declining traffic to China in recent months and capacity levels in Sep-2012 have been at lows not seen in over a year. 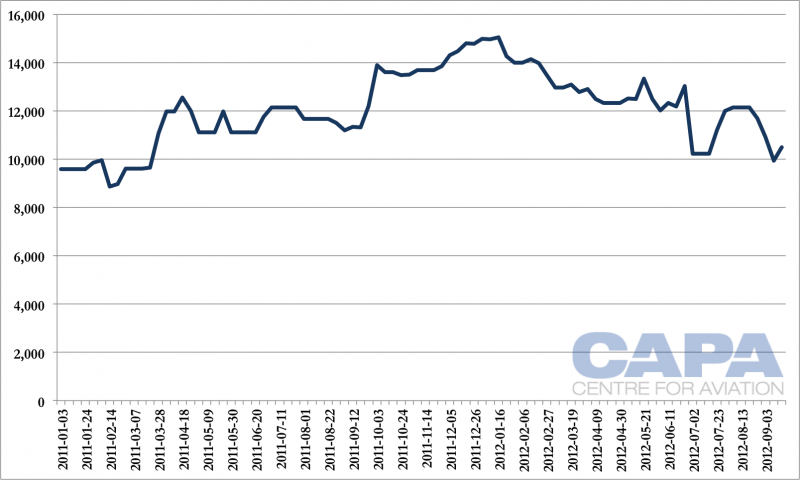 The cause of contention is another territorial dispute. As CAPA reported in Sep-2012:

There are currently about 11,000 one-way scheduled seats per week in the Philippines-China market, down about 15% from May-2012 when China first issued its warning against travelling to the Philippines following a naval standoff with the Philippines around the Scarborough Shoal. Philippine carriers account for nearly three-quarters of capacity in the market. Philippine Airlines (PAL) is the largest carrier, accounting for 37% of current capacity between the Philippines and China.

PAL, Zest and Cebu Pacific also operated frequent charters into China prior to May-2012, when Chinese tour companies cancelled their charter programmes as a result of the travel warning. Most of the charters operated to airports near beach resorts (such as Kalibo) rather than Manila. The warning has also significantly impacted demand and profitability on scheduled routes, according to executives at Philippine carriers.

The PAL Group's LCC subsidiary, AirPhil Express (which later this year will readopt the previous brand PAL Express), also operated flights to China prior to the onset of the current crisis in May-2012. PAL Express will likely resume flights to the country once tensions ease and would be the logical brand for adding destinations in China that are not served by PAL mainline given AirPhil/PAL Express’ leisure focus and all-economy configuration.

Region poised for growth, but geopolitical situation must be calm

Tremendous growth in north Asia remains to be unlocked, but a great share of traffic is between nations that have physically small, symbolically large disputes and can involve more than two nations. Blips and even long-term declines in traffic have been experienced in conflict zones – for example, Syria, currently. But north Asia's qualms are unique and a solution will have to come through diplomacy unless the situation is severely escalated to an armed conflict, in which case the lasting consequences will be far greater than mere blips.

Some suggest the current dispute between China and Japan is mere theatre playing into the forthcoming Japanese election and Chinese political changeover, similar to the United States' recently filed WTO claim against China over car manufacturing. Whatever the balance of motivation, the situation between China and the Philippines – low on the Chinese public's radar, unlike Japan – reminds that high-profile missives are not necessary for market depression. And as relatively new cross-strait flights between Taiwan and mainland China show, if differences are put aside, great economic benefits, enabled through aviation, await.