Cyprus Airways is facing intensifying competition in its local market while it contends with falling revenue and rising expenses. A turnaround plan is underway to streamline the airline’s operations in attempt to strengthen the carrier prior to raising new capital and a potential sale to a strategic investor. All the while low-cost carriers are growing in influence in the key Cyprus-Europe market.

In 2011 Cyprus Airways’ revenues were down 10.1% to EUR212.4 million while operating costs grew 1.9% to EUR264.7 million, primarily from rising fuel prices. The negative result was attributed to the ongoing economic downturn along with “intensifying competition in the main markets” where the airline operates. The flag carrier expects to be impacted further by Greece’s financial crisis while unrest in the Middle East is expected to continue to create uncertainty.

Cyprus Airways’ action plan focuses upon strengthening the airline’s capital base while streamlining its operations. Reductions in operating costs including from labour is expected and will follow the streamlining of its network and disposal of aircraft.

The Cyprus Government, which owns 69% of the carrier, authorised the airline in Feb-2012 to move forward with raising fresh capital and a potential sale of some of the Government’s majority stake. The airline plans a EUR45 million capital injection, which will be raised through the sale of 500.7 million shares.

The combination of a streamlined network and reduced labour roll are expected to reduce operating losses while strengthening the carrier, making it more attractive for potential strategic investors. Cyprus Airways is not alone in its search for strategic investors, however, with a number of carriers, particularly in Eastern Europe, seeking investment. Turkish Airlines recently stated it had received offers from 15 airlines wishing to be acquired.

In Feb-2012 Cyprus Airways was rumoured to be a takeover target with Aeroflot, Qatar Airways and Middle East Airlines (MEA) reportedly in discussions with the airline. MEA confirmed its interest in acquiring a stake in Cyprus Airways, with chairman Mohamad el-Hout stating in mid Feb-2012 the Lebanese carrier believes “there is real potential for us and we are studying it seriously”. Beirut is currently Cyprus Airways’ fifth largest market.

Cyprus Airways’ primary markets are Western and Eastern Europe with almost an even split of operations between the two areas. It also has a notable operation to the Middle East, accounting for 13.6% of its total available capacity. 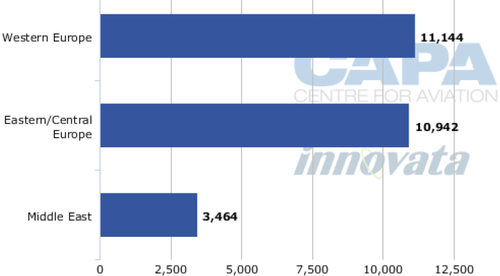 Airline management has highlighted the current situation in Greece as a risk to the carrier in 2012. With Cyprus being located close to Greece, Cyprus-Greece air links are important to Cyprus Airways. The airline’s largest route by available seats is Larnaca-Athens while its third biggest route is to Thessaloniki, the second-largest city in Greece.

Despite the financial crisis in Greece, Cyprus Airways will launch in Mar-2012 a thrice daily Athens-Thessaloniki service. This will be the second domestic Greek service Cyprus Airways offers. It currently operates Irakleion-Rhodes three times weekly. Greece’s financial situation is likely to affect Cyprus Airways traffic to, from and within Greece as austerity measures further ramp up. 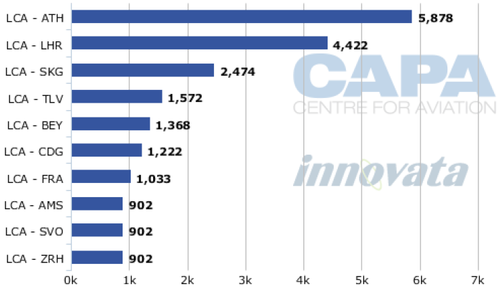 Cyprus Airways is the leading carrier from Cyprus’s main gateway, Larnaca, where it accounts for 31.5% of total capacity. Larnaca features some low-cost carriers including easyJet but the LCC penetration rate at the airport is currently only 11.6%.

Of Cyprus Airways' top ten routes, all from Larnaca, only three are operated solely by Cyprus Airways: Paris CDG, Amsterdam and Zurich. All others are also operated by other carriers, though primarily only full-service carriers.

Cyprus Airways’ only services from Paphos are to Amsterdam and to Larnaca with the latter operating once per week to reposition aircraft for the Paphos-Amsterdam service. Cyprus Airways’ lack of direct competition with the low cost carriers is a positive aspect of the airline’s network though it highlights the risk if LCCs like easyJet or Ryanair decide to target key Cyprus Airways routes. Larnaca and Paphos are only 128km apart but easyJet has shown both airports can support service to London. While direct competition with LCCs is low, the very existence of LCCs on routes Cyprus Airways does not serve semi restricts Cyprus Airways' expansion as it would have to contend with established LCCs. 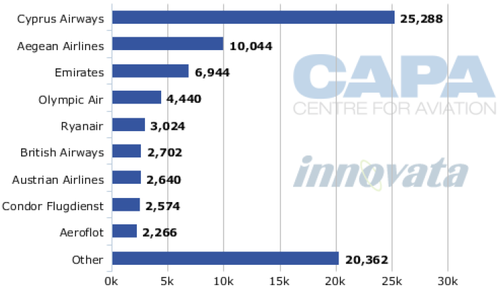 Cyprus Airways is likely to begin to remove unprofitable routes and adjust frequencies on other routes as it seeks to streamline its network. Airline management will need to tread carefully as its changes could spark industrial action over its planned reductions in labour costs, which will see the carrier reduce its workforce. The carrier will also need to evaluate its fare and product structure to determine if a bundled product is most appropriate in a leisure-heavy market with significant competition from LCCs that have unbundled structures.

Cyprus Airways joins a number of small European carriers facing an uncertain future. While the streamlining of its operations may make it more competitive in the short term, an investor may be necessary for the carrier's long-term future, even if investors have so far proven elusive to many small carriers in the current economic environment.